How to coach positional defending

There are plenty of different ways to set up a defensive style of play. You can mark individual players of the opposing team or you can perform collective man-marking like Atalanta do. You can use zonal marking or zonal man-marking. There is also the possibility to defend with a strictly positional approach. In Sweden, where I’ve done my coaching badges, the term for this is positional defending. I’m not 100% sure what to call this in English as I’ve seen the terms “ball-orientated” and “positionally-orientated” defending. For the purpose of this tactical analysis of how to coach this particular style of defence, I’ll use the term positional defending.

What is positional defending?

Positional defending, simply put, means a player defends in regards to where the ball and their teammates are. This is in stark contrast to man-orientated defending where you defend depending on the position of your direct opponent. Man-marking’s nature is of a reactive defensive style as you always adapt to the opponent. With positional defending you can make the attacking team adapt to you.

An example is if you want your team to deny the opponent the chance to play centrally between the lines of your team. A positional approach where you make your team compact both vertically and horizontally will force the opponent into wide areas. The defending team has therefore forced the attacking team to adapt their play to the defending team. Many young coaches prefers this rather than adapting to the attacking team like most does against Manchester City.

One coach who mostly uses a strictly positional defensive style is Antonio Conte. Maurizio Sarri’s Napoli mostly did too, and so does his Chelsea. From the World Cup this summer we saw Sweden reach the last eight thanks to superb positional defending. Now let’s look at how we can coach it.

I prefer a positional defensive system because of the advantages I’ve described above. For me, the most important part of my defensive strategy is to block central areas and force opponent’s wide where it’s easier to press them. After all, the sideline is a great friend for a team when defending. When I start implementing my philosophy I will therefore work the principles of press and cover into my players. When one player presses the ball I want the players around him/her to cover. The classic 4 vs 2 rondo is therefore a perfect drill to start working on these concepts. 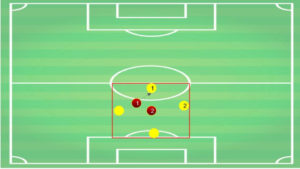 In this drill we have four attacking players on the sides of a rectangle. The attacking team tries to keep possession while the two defensive players try to win the ball. Work on pressing angles and cover to the pressing player to stop passes going through the two defenders. In the image above, the red number 1 presses the yellow number 1. He angles his run to cut off the pass to his left. Red player number 2 covers his pressing teammate while blocking the pass through the two of them. The only available pass is to yellow player number 2 which is within good access to press immediately.

When the defenders win the ball one of them switches with an attacking player. An alternative is to work in groups of two where they are in for a certain amount of time. To add a counter-pressing aspect for the attacking team would be to put mini-goals outside the space for the defenders to dribble into when winning the ball. 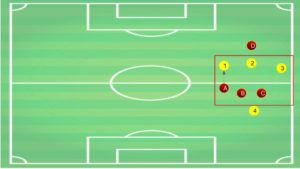 Moving into the next exercise is this small-sided game of 3 vs 3 with a target player on each side. The rules and instructions are simple. When the ball is in front of a specific defensive player, player A in the image above, he goes to press the ball. His teammates, B and C, adjust their positioning to cover their pressing teammate. If the ball is transferred from player 1 to player 3 (as highlighted in the image below) the three defenders shuffle across with player C now pressing player 3 while A and B cover their teammate. The goal for the defensive team is to block passes through them. They are instructed to force the play wide and stop passes going through their block. The attacking team moves the ball in order to find a penetrating pass through to their target player. 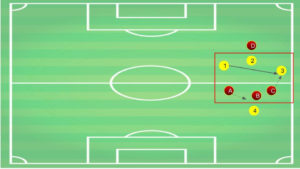 When your team understands the principles and you are satisfied with how they’ve responded to your coaching of these principles you can move onto the next step. This exercise is a progression on the above exercise. 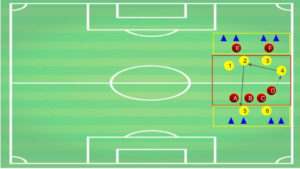 This exercise is a progression on the previous where the players get to know the concepts of press and cover. The game is similar but we now use 4 vs 4 rather than 3 vs 3. At each end line we also have a zone with two target players and two mini-goals. The game is basically the same; the defending team looks to prevent passes through the centre while the attacking team looks for passes that break the defensive line. If, as in the image above, a pass breaks the defensive line and finds the two target players then they look to score in the mini-goals. The defending team has to quickly react to the pass beating them and try to prevent the two attackers from scoring. Use four or three players depending on which line you’d like to work based on which formation you defend in. 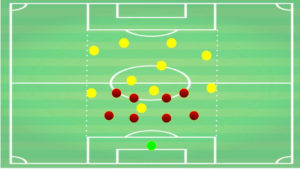 Players: 19-22. Divide into two teams. It’s possible to start with an 10 vs 8 + GK before building into a full-game.
Space: The width of the penalty area and the length of almost the entire pitch apart from the attacking teams penalty area.
Time: 20-25 minutes.

We are now building into a full-game and to prepare for that based on our aims of how we want to defend and how to make this clear to the players, I like to use this game of 10 attackers vs eight defenders + goalkeeper. Due to limiting the width of the pitch, it’s easy for the players to understand how compact we want the team to be (of course, every coach has different ideas). It becomes very clear for them of how I want them to defend when we limit the width for the attackers. Stop the game when something goes wrong and you’d like to correct the positioning. It’s important to add a counter-attacking incentive for the defending team to make the game more realistic (for example cone-goals in the attacking teams half or dribbling into the attacking teams penalty area). When you’re pleased with the work of defence and midfield, add forwards to get a full-team on the pitch. Then remove the width restrictions and transform into a full-game. Now the focus becomes more about shuffling across to the opposite side and dealing with a bigger pitch. But they should be ready for this by now.

Positional defending is a style of defending which allows a team to be proactive when defending instead of reacting to how the other team plays. The ball and teammates are the main points of references when defending rather than the opponent. This tactical analysis has given you some drills to implement if you want to train your players in this style of play. You can use the drills as parts of a session or following each other as a full training session. People often complain about the “art of defending” dying. Let’s change it. 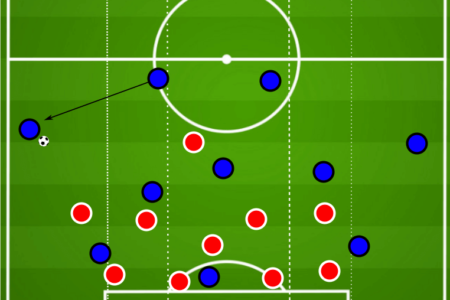 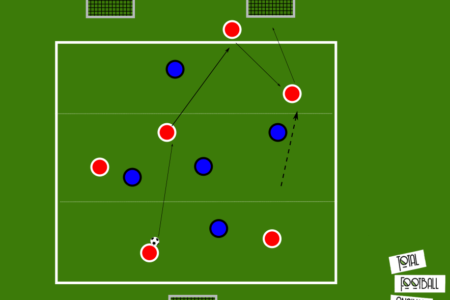