Patrick Vieira arrived in Nice to continue the work of his predecessors Claude Puel and Lucien Favre. But the start of the world champion has been slow, with only a point taken in three games. After all, he has only limited experience on a sideline.

Reims, Caen and Dijon – the opening fixtures were ideal for a good start, before two more important games against Lyon and Rennes. However, a draw was not unfortunate against the Normans. Their first defeat was against promoted Reims (1-0), followed by a very heavy defeat at home against Dijon (4-0).

Nice after the transfer window

If he suffers due to comparisons with Puel, currently at Leicester, and Lucien Favre, who left late last season for Borussia Dortmund, the former defensive midfielder of Les Bleus still has an excuse: the transfer window.

Nice has indeed lost three of its key men this summer. Striker Alassane Plea transferred to Monchengladbach for €25 million, while defender Maxime Le Marchand and the keystone of the midfield, the Ivorian Jean-Michael Seri, both joined Fulham. Therefore it’s not the same Nice as it was last season. However, the current squad – built on the work of an excellent academy – is still a bit higher in terms of talent than the majority of Ligue 1 teams.

Patrick Vieira is used to developing a lot of young players. Being coach of Manchester City’s academy probably influenced this, with players like Jack Harrison at New York City (now on loan from Manchester City to Leeds United) developing under his tutelage. Knowing that Nice have a strong focus on youth and infrastructure development helped influence his choice to join.

Tactics and adaptions in Nice

Vieira arrived with a clear and ambitious flight plan:

“I want a team creating an attacking game where the players express their qualities,”

Like when he started in New York, the 1998 world champion came with a 4-3-3 lineup and a game built slowly from the back.

With Dante, he has the perfect centre-back, able to play the first pass. The rest of the defence is quite good too with Boscagli or Jallet, who are top players in their positions.
Most of the time, Vieira’s team build from the flanks with players who don’t hesitate to pass horizontally rather than lose the ball.

In New York, the building phases went through Andrea Pirlo (logically) but this kind of deep-lying playmaker is lacking in Nice. The perfect player for this job would be Koziello but left Nice to FC Koln in January.

Therefore, the basic block that looked like a “W” in New York is something we didn’t see that much during Nice’s opening games this season. However, with Dante as the leader, young players like Tameze or Danilo should improve a lot both in terms of tactics and skills. 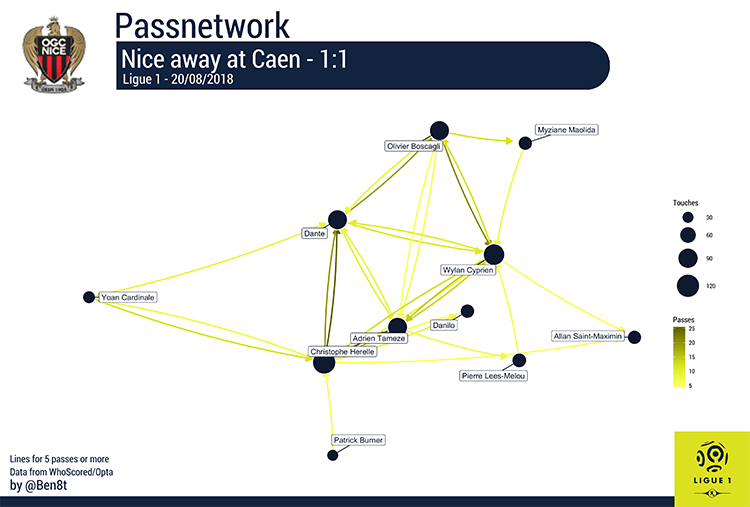 For now, Tameze, Danilo and Cyprien comprise the midfield. The latter is the only one who can be regarded as an experienced and complete midfielder.

This midfield is maybe the first problem in Nice’s current tactic. While it is a very young midfield (with an average age of 23), they may have difficulties fully understanding what Vieira has in mind.

It’s maybe in defence that Nice has a lot to show. While it was the speciality of Patrick Vieira when he was on the field, Nice’s defensive phases have similarities with the latest trending tactics, inspired by Klopp and Guardiola.

Indeed, Vieira likes to press opponent very quickly after the loss of the ball, with forward players pressing centre-backs. During this short phase, the 4-3-3 switches to a 4-2-3-1 with Cyprien going ahead to help the striker when pressing centre backs while wingers stay close to the opponent’s wing-backs.

Then, when the pressing ends with nothing, the team quickly move to a more classical 4-1-4-1 where the defensive midfielder doesn’t hesitate to move back between the centre backs. It’s something we saw against Lyon where Patrick Vieira set up a 5-3-2, probably to restrict breakthroughs from Lyon attacks, which are of real high quality.

Ligue 1: a step above MLS

Though Major League Soccer is a very competitive championship now, it’s still poorer than ones in Europe.

For Vieira it’s a new challenge, where the game speed is higher, the physicals aspects are more important and, especially, the defences are stronger.

Nice are maybe the worst team in these areas as we can see from these graphics showing aerial duels won per game. 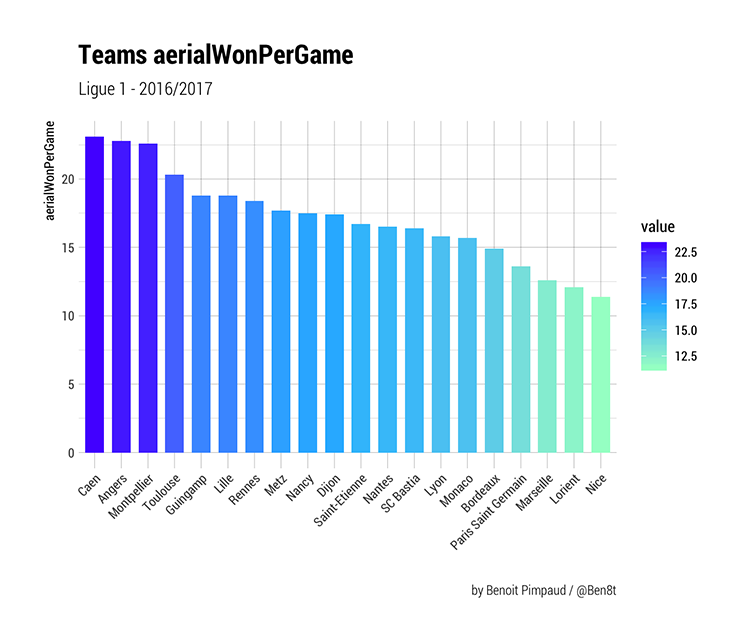 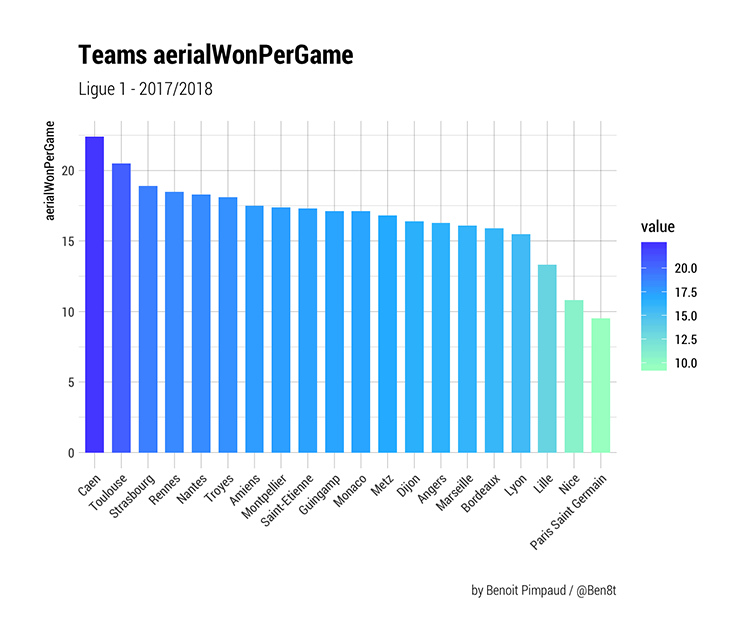 Vieira should also change his tactics slightly from building from his centre backs if he doesn’t want his team being overloaded by an opponent’s pressing, or Nice aren’t able to create chances. This is something we have already seen in his first games in Nice.

Moreover, in New York, he counted a lot on young players. In Ligue 1, while the best players are experienced ones, his current side has a lot of young players, who may be talented but don’t quite have enough experience.