A new wave of young managers his coming and some have already gained experience in top clubs.

These new managers can be split in two segments: young German managers like Julian Nagelsmann, Manuel Baum or Alexander Nouri who start their coaching journey early. And former top players who are often blamed for their lack of experience as managers.

Here we will focus on Patrick Vieira who is in the second part and especially interesting in how he grows as a manager.

On the way to manager

On July 14 2011, at the age of 35, the former French international decided to put an end to his football career after a disappointing season in Manchester City. The ex-midfielder remains in City to represent the club in the UK and abroad.

Thanks to his experience, Vieira also has an “expanded role” within the club especially with young people. For two years, he goes around all sections of the club, from management to supervision, through training.

For the 2013-2014 season, Patrick Vieira is appointed coach of the reserve team (U21) of Manchester City. The French replaces the Italian Attilio Lombardo, who leaves the club at the same time as his compatriot and former coach of the first team, Roberto Mancini. Vieira then holds his UEFA B coaching license for a year and wishes to be given a role closer to the field.

His results with Manchester City youth teams are not perfect – moreover with an important stuff supporting the team – as we can see on the graphic below. 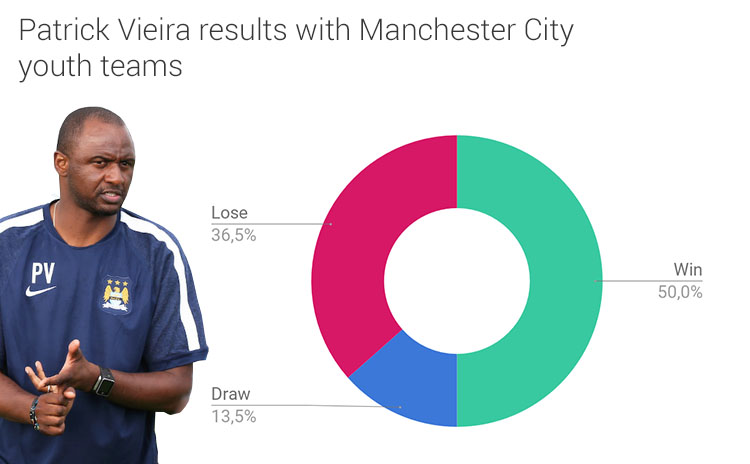 When he come in New York City – a “subsidiary” club of Manchester City – expectations are more important, especially due to the youth of the club.

After a very good first season, finishing second of the East Conference with 16 wins, 9 draw and 9 loses, they lose in conference semifinals against Columbus Crew SC.

This good course is not necessarily due to Vieira but more to the quality of its squad. His team is set up to compete with players like David Villa or Andrea Pirlo (only first season) and he is still too young and inexperienced to bring useful tactics plan in important games.

This relative youth in coaching is particularly visible in some games where a kind of hesitation in his choices and delay in coaching reaction can be felt.

The former Arsenal player tactic looks like a bit the Arsene Wenger one, maybe with faster pace and more physics.

Starting coaching within Manchester City helps him to learn quickly this kind of tactic and going to MLS allow to continue in the same direction.

With an average possession of 57.5 % and 1.9 goals per game, Vieira’s team is definitively an offensive one.

He also brings what characterises him as players, namely a certain roughness in physical duels. This aggressiveness is often punished in United States : this season New York City received 23 yellow cards and 1 red card in just 10 games.

In term of squad formation, Vieira prefer a 4-3-3 that often look like a 3-4-3 as we can see on the passmap below. 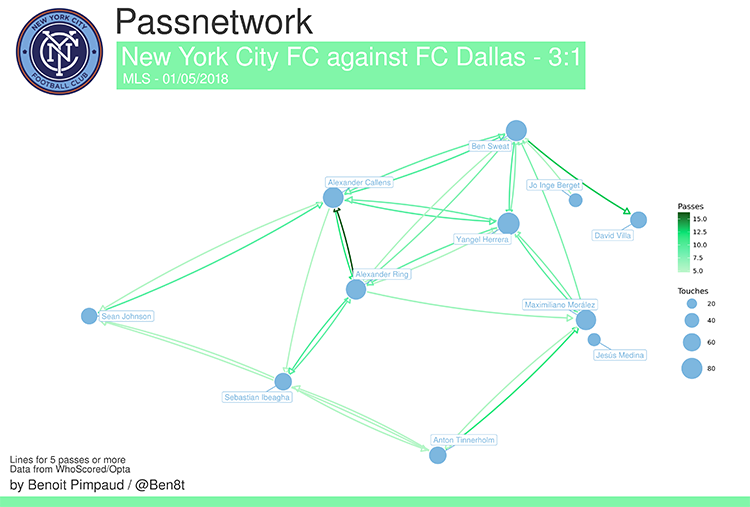 It can make us think about Manchester City or Real Madrid tactic this season, with lineups announced as 4-3-3 or 4-2-3-1 but that quickly move in 3 players based in attack, with a deep-lying midfielder a bit above the two centre backs.

With the summer coming, rumours send Vieira in Arsenal as the replacement of Arsene Wenger.

Arsenal board is still looking for the perfect substitute and a young coach could be a solution. Among others young solutions – Thierry Henry or less known German manager – Patrick Vieira could be the best solution.

However, Vieira has also repeatedly said that he is happy at NYCFC and is not eager to leave for a move to Europe,

He told Sky Sport Italia during his visit in Italia that he chose Napoli for a scouting mission because “they are entertaining to watch”. Confirming his adaptability to a fast-paced football game. The former Arsenal star said he continues to keep a close eye on the Italian game from the United States, and says Serie A is a three-horse race this season.

His results in MLS are quite good for the moments and are are in agreement with the expectations of the club leaders. Being a serious man, Patrick Vieira is likely to stay in New York until the end of the season (October) unless an unrefusable offer from Arsenal is on the table. We will have to wait until the end of the World Cup to know more (as well for others transfers).

If you enjoyed this piece of analysis check out more here: Luis Alberto – Caglar Soyuncu