Under Sergio Conceição’s guidance, FC Porto won their first Primeira league title since 2013. For Conceição – who is coming off a great job he made with Nantes in Ligue 1 – this is another impressive result to add under his young coaching career belt.

Other well-regarded managers such as Paulo Fonseca, Nuno Espirito Santo or current Spain’s coach Julen Lopetegui tried but failed to achieve the league title as Conceição did.

The main feature about Conceição’s tactical approach at Porto is flexibility. Former Lazios’ midfielder switched his side approach based on game or opponent. Generally speaking, Conceição’s Porto have been built around a 4-4-2 with Vincent Aboubakar and Moussa Marega up top.

To maintain defensive compactness, Conceição often opted to play with three central midfielder and two wingers in a sort of 4-5-1/4-1-4-1 system with Danilo acting as a midfield’s sweeper. 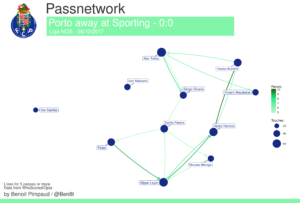 The pass map provided by @Ben8t highlights us the lone striker formation lined up by Conceição against Sporting CP.

The four-man backline has played a pivotal role into Porto’s seasonal success. Ricardo Pereira on the right and Alex Telles on the left are the full-backs. Both are skilled footballers able to push high up the pitch acting as wing-back with Conceição’s side in possession. They are technically gifted: the 24-years old Pereira registered 80.3% of pass success, also adding two goals and four assists. On his part, Brazilian Telles accounted for 83% of pass success with three goals scored and an impressive twelve assists produced.

The centre-backs duo features Brazilian Felipe paired with Iván Marcano. Both are suited with the ball at their feet with Felipe recording an 83.1% of pass success rate whilst the Spaniard Marcano produced an 82.5% on the same category.

In the middle between Aboubakar and Marega and the backline, Conceição usually lined up a four-man midfield featuring Yacine Brahimi and Jesús Manuel Corona as wingers.The Mexican Corona – who already made a lot of buzz when playing in Eredivisie with Twente some seasons ago – netted three goals and three assists while the 28-years old Algerian Brahimi scored nine league goals also adding seven assists.

From an offensive point of view, the key aspect Conceição’s will to have both wingers playing inside into their respective centre-half whilst the full-backs have the freedom to push higher up the pitch. This offensive movements gives Brahimi and Corona freedom to roam up top and to link the play between the midfield and Aboubakar and Marega. This pattern allowed Porto to disorganise and manipulate the opposition’s defensive structure. Brahimi is particularly able to do it. He completed as many as 5.2 dribbling per game allowing Porto to create numerical superiority.

Conceição’s positional play. Take a look to Brahimi’s inside position which leaves Telles free to occupy the wider left channel.

But the aforementioned movement also reduces the spaces both Aboubakar and Marega have to cover up top. In fact, both forwards are instructed to stay inside the middle channel and the half-spaces in order to minimise their energetic expenditure.

Coming to the defensive phase of the game, Porto is particularly focused when playing without the ball. The main aspect of Conceição’s defensive approach is the attempt to reduce the space around the opposite’s ball carrier. It happens playing an aggressive high-pressure involving both strikers and the flankers. The goals over there are the attempt to manipulate rivals’ building up by forcing defenders or the goalkeeper to play long balls which can be easily recovered by Porto’s centre-backs or also to immediately win the ball back into more advanced area of the field.

It also has been not unusual to see an interior midfielder accompanying the forwards up top in the pressing action with the remaining midfielders positioning themselves in order to cover the channels in the middle of the park.

Obviously, this is a risky tactic. In fact, as even happens with side playing high-pressing, should the opposite team bypass Porto’s first line of pressure they would have a lot of space to exploit in front of them. It means Conceição put a lot of emphasis on his team approach during defensive transitions. They require Porto’s players have to recover their position as soon as possible.

This approach is deeply demanding for Conceição’s backline as they need to stay focused in order to correctly read ball open situations in which the four-man defence has to collapse behind to prevent opponents from gaining space at their back.

With opponents defending through a low block, Porto have always been dangerous providing nice crosses from the outside. The inside movements of both flankers inside the half-spaces allowed full-backs to receive the ball with space and time to deliver these crosses.

That said, Conceição showed his flexibility once again when it comes to play in Champions League against better and stronger opponents. In this case, the coach asked his team to be able to defend deep in their own territory, also giving them the freedom to play long and direct balls up top to avoid opposite’s offensive pressure.

After his brilliant Ligue 1 experience, Conceição was able to repeat his success in Portugal showing to be flexible enough to adapt his side according to the level of the opposite team. The compromise between his football philosophy and the game Porto had to play and Conceição’s attention to the details make former Portugal international another Portuguese coach to take a look to next seasons.

If you enjoyed this piece of analysis, you check out more articles here: Fabián Ruiz – Matias Almeyda