This is the last season of Arsene Wenger at Arsenal, experts say without being too wrong that it is more the players than Wenger who have disappointed this season. If some players might be out of the next team season, others could be even more important and take a larger part of team rotation.

Here we’ll talk about a relative unknown player (at least for non-Arsenal fan) came into this rotation and confirmed his consistent performances : Ainsley Maitland-Niles.

Born in Goodmayes, London, Maitland-Niles is a product of Arsenal Hale End Academy having joined the club at the age of 6. Though his name is difficult to say, this young player is easy to watch either technically or tactically. He signed his first professional contract in October 2014 being one of the youngest player playing for Arsenal, having broken into the U21 side as a 16-year-old.

Being loaned to Ipswich Town during the 2015-16 season under Mick McCarthy, who really appreciated the player, Maitland-Niles already impressed in a competitive environment: in Premier League he was clearly in the team rotation as we can see on the graphic below. Moreover he plays an important role in early stage of Europa League with 8 games in the starting eleven. 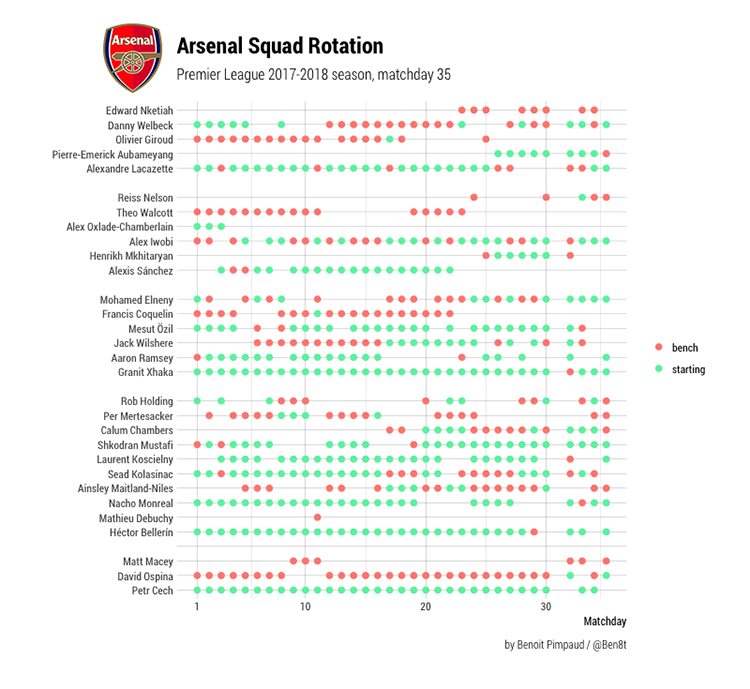 He won the U20 World Cup with England but he will probably not be at the World Cup, the step being a bit too big for this young player.

Questions about position on the field

If you don’t know Maitland Niles and you ask someone what is his main position on the pitch, he will probably have difficulty answering. In fact the Englishman started his career as a tricky right winger who like provoking and creating chances in the last yards.

But playing more and more at a higher level, he gradually dropped deeper. Now he’s playing in a central midfield role, he sometimes made senior appearances at right-back helping him to develop a deeper understanding for the defensive side of football too.

He’s still a genuine attacking threat from midfield but doesn’t shy away from his defensive duties either. However he doesn’t win enough aerial battles and that’s an area he’ll need to work on, especially if he does make the midfield position his preferred role at Arsenal.

The young Englishman is following the same path as Alex Iwobi or Oxlade-Chamberlain at the club. So it’s difficult to say what will be his future, moreover with the end of Arsene Wenger era. But his abilities to play in different positions could be an advantage for him. Hector Bellerin is still the main right back in the team, his performances this season are not very good and transfers rumours could come back this summer. Here we can make the parallel with Liverpool. Clyne went down (partly because of injuries) and Alexander-Arnold filled the position. Now he is almost every time in the starting eleven.

Bellerin departure or injury could leave the position open for Maitland Niles. It might be harder to take a place into the midfield as there are much more experienced player like Xhaka, Ramsey, Wilshere or Elneny (and maybe an arrival this summer) and, as we said previously, he has still some difficulties in physical duels. However, he is 20 years old and so the role of substitute could suit him still for a few years, allowing him to gain experience.

In fact his future will be clear the next season with the new manager. Here we can try to extrapolate with names that could possibly replace Wenger: if Ancelotti or Allegri come in London it might be difficult for young players to show their qualities and start in the starting eleven. With Enrique or Tuchel positions are more flexible and so perfect for Maitland-Niles profile.

Outside of the focus on Maitland-Niles, this change of manager will be decisive to know if Arsenal will continue to turn towards youth and a certain style of play and if it will remain the same while, importantly, winning trophies.