Rolando Mandragora has been highly touted for a number of years. The midfielder has been tipped as a possible first team player for Juventus. After a strong season at Crotone, there has been growing support for the youngster to be part of the squad already next season. Given his performances at Crotone this term, it’s hard to argue against that thought. Mandragora has been sublime, impressing with superb passing ability and a strong defensive contribution for the Pitagorici. Let’s look at the extremely gifted 20-year-old.

Mandragora was born in Naples in June 1997. He started out at the Cannavaro brothers football school, which his father headed. At 14, he made the move to Liguria and signed for Genoa’s youth academy. He quickly rose through Genoa’s ranks and eventually made his Serie A debut in October 2014. The then 17-year-old started Genoa’s clash with reigning champions Juventus. After earning another four Serie A appearances for the Grifone over the next year, Juventus signed him in January 2016. Juve immediately loaned the talented midfielder to Serie B side Pescara. The midfielder went on to make 26 appearances for Pescara before a metatarsal fracture in April 2016. That injury kept him out of action for a long time since it needed surgery twice three months apart. That destroyed his 2016/17 season. He did make his Juventus debut at the end of the campaign though, against Genoa.

This season, Mandragora was loaned to Crotone and has been a mainstay for the Pitagorici. The midfielder has started 34 games so far and has been consistently impressive. With the season ending shortly it will be interesting to see where he ends up next season.

Played mostly as a defensive midfielder in a 4-3-3 recently, Mandragora’s main strength is his range of passing. He sits at the back of the midfield and looks to get on the ball to construct attacks. Crotone play quite a direct game, often bypassing midfield, so his influence could have been higher in a more possession-focused approach. This direct approach has clear benefits which help Mandragora develop though. The emphasis to play the ball forward quickly forces the Italian to be progressive in his passing. He constantly looks for teammates moving forward and tries to pick them out. His fantastic long-range passing is one key component in his style of play at Crotone. The Neapolitan has a wonderful touch and can spray the ball incisively over large distances.

Below, Mandragora has possession on the left of midfield. He spots the weak point in Milan’s defensive structure and pings the ball to his teammate running in-behind. 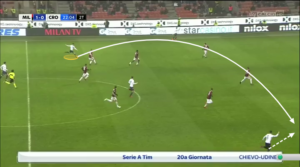 In the below scene, Mandragora shows off his impressing quick-thinking and understanding of in-game situations. He picks up a poor Inter pass and immediately identifies the high positioning of three Inter defenders (highlighted in blue). He quickly plays a vertical pass in-behind Inter’s defence into the path of his teammate. 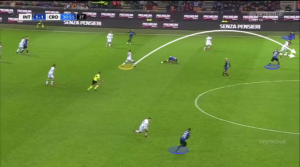 In this third example below, Mandragora is in action for Italy’s Under 21’s. He spots the run of his teammate and plays the ball into the space behind Serbia’s defensive line. 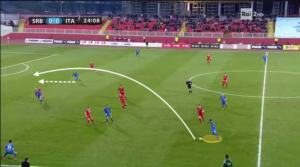 Mandragora is also very creative with his passing in the final third. One type of pass he has mastered is the lobbed ball over a deep defence into the path of an onrushing forward. Below, the Italian lobs the ball over the Cagliari defense to put his teammate in on goal. 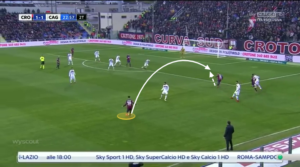 And this final example sees a similar lobbed pass over a shorter distance as Mandragora sets his teammate through on goal with a brilliantly weighted pass. 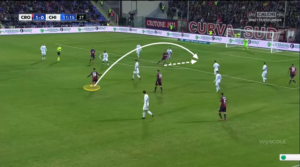 Despite appearing for a side not particularly focused on keeping possession, Mandragora gets to work with his passing. The fact he is so creative in the final third despite normally playing in a defensive role shows the quality the young man has in possession.

Playing in defensive midfield means Mandragora can’t only be good in possession. After all, only Andrea Pirlo can get away with that. Thankfully, Mandragora is superb at reading the game and making interceptions. He also excels at breaking up play with strong tackling. This is reflected in his defensive stats for the season. He ranks fourth in Serie A this season in terms of his average of 2.4 interceptions per game. He also ranks high with his average of 2.6 tackles per game. Further highlighting his defensive contribution to Crotone this season is his average of 1.9 clearances per game, showing a midfielder helping out in the defensive third. It’s beyond doubt however that Mandragora is a very good midfielder  defensively and not only in possession.

Juventus have just clinched a seventh successive Scudetto in Italy. Last week they won their fourth straight Coppa Italia, making it four straight doubles for the Bianconeri. Naturally, they are easily Italy’s leading club at the moment. Still, there’s a sense an evolution of the squad is edging closer. At the back, Giorgio Chiellini, Andrea Barzagli, Stephan Lichtsteiner and Medhi Benatia are all over 30. The same goes for Claudio Marchisio, Sami Khedira and Blaise Matuidi in midfield. Players like Miralem Pjanic and Kwadwo Asamoah are also edging towards 30.

While age is irrelevant as long as performances are still of the highest level, Juve have been forced to look towards the future. Defenders like Mattia Caldara and Leonardo Spinazzola will come into the squad at the end of the season to energize the defense. Daniele Rugani is already there. Rodrigo Bentancur has had a first season in Turin to get comfortable. There’s a sense Mandragora fits into this equation too. Let’s look at how he compares to his midfield colleagues at Juve.

Statistically, Mandragora is comfortably better than the other Juventus midfielders in terms of defensive contribution. Only Miralem Pjanic (2.0 per game) comes somewhat close to Mandragora’s interception stats. In terms of tackles, Mandragora crushes his colleagues. His average of 2.6 tackles is closest challenged by Matuidi’s 1.6 tackles per game. Only  Bentancur betters Mandragora in terms of total duels won with the Uruguayan winning 45.88% and Mandragora 45.38%. Sami Khedira comes next at 43.30%. It’s problematic to compare defensive stats across different teams with different styles of play. If we do, it seems like the 20-year-old stacks up well against his future teammates in the defensive department.

In terms of contribution in possession, Mandragora similarly compares well. Only the creative genius Pjanic creates more chances per game. This highlight the creativity in his game we looked at above. The youngster is well below the other four in terms of pass completion, but this is mostly explained by the contrasting nature of how Crotone and Juventus play. Crotone’s direct, vertical attacks hardly focus on keeping the ball in the same manner Juventus do. But 80% is still a number Mandragora needs to improve.

Rolando Mandragora has had a fantastic season at Crotone and there is growing support for him to be part of Juventus’ squad next season. His passing and defensive contribution would be assets to strengthen Juventus’ squad. However, at his age, he needs to play. Would he do that at Juve next season? Bentancur’s limited playing time would suggest no. Therefore, another loan deal would be preferable. Ideally he would spend next season at a team more inclined to dominate possession, such as Sampdoria or Atalanta. Both sides and coaches would take the Italian to the next level. If so, Mandragora would definitely be ready to challenge for a starting spot at Juve in 2019.

Google Mandragora and the first results won’t be of the young playmaker but of a certain type of plants. In some time though, Rolando Mandragora will be the first that comes to mind.