Croatia needed a play-off to qualify for the FIFA World Cup 2018. But there they dismantled Greece 4-1 on aggregate. Heading into Russia 2018, Croatia will be one of the teams to watch. Partly because of their fantastic midfield. But perhaps most for their entertaining football under Zlatko Dalic. Russia 2018 might go on to be classic in Croatian folklore.

Dalic was brought into the role after Croatia didn’t secure an automatic qualification spot and took control of the two play-off ties. The task was to beat Greece and lead Croatia to Russia 2018. Croatia won 4-1 at home and drew 0-0 away. Job done for Dalic. Going into the summer it remains to be seen how he sets the team up. Going by his first few games it’s going to be a 4-2-3-1 in attack and 4-4-1-1 in defence.

Defensively, Dalic sets Croatia up in a 4-4-1-1. Dalic wants Croatia to press high and they’ll  do the same in Russia. They use a very man-orientated press as you can see below. Each player pushes up against an opponent on the ball-near side to remove the option to go short. The exception is Ivan Rakitic (white circle) in the middle who covers the pressing action of Brozovic. At the same time though, if the ball is switched, Rakitic is ready to mark the opponent to his right. 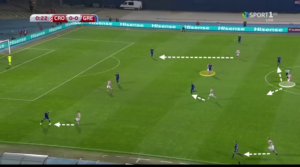 Below is another example of how their press works and how Rakitic as the ball-far central midfielder once again covers his midfield teammate. Croatia normally steer the opponent to Croatia’s left where they then look to press aggressively. 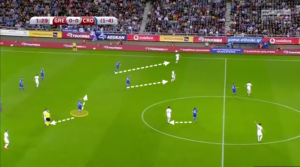 And below is a third example with Rakitic again the only one with a covering position while the others mark. 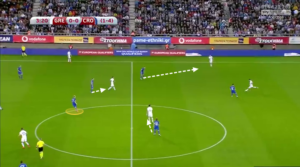 Croatia’s pressing will be key to their success in Russia 2018 given the question marks surrounding their defence. If they can win the ball high and transition to attack quickly they’ll be a match for everyone.

In attack, Dalic’ Croatia are quite flexible. Due to the enormously gifted players they have in midfield they can dominate possession effortlessly. However, they are also extremely dangerous when counter-attacking with the pace of players like Perisic, Pjaca or Kramaric.

When building attacks from the back, it’s not rare to see the wingers move inside and leave the flanks to the full-backs. Here I’ve highlighted the three attacking midfielders who are all in central positions. The full-backs on both sides push on with the central midfielders balancing. The striker Kalinic in white has dropped deep to receive from Rakitic. 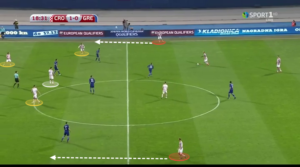 On other occasions, Perisic (white) in particular stays wide while the opposite winger (white) comes inside to overload. Modric often drops out of the number ten space and creates a midfield three looking to dominate possession. In this scene, the right-back pushes on wide, receives the ball in depth before crossing for a Perisic header. 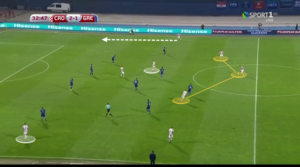 Croatia’s flexibility going forward should theoretically give them good chances of overcoming a group which is difficult to read. Given their quality you’d back them to progress. The capacity to counter-attack at pace while the next minute patiently pass the ball around and dominate possession makes them intriguing to watch at the FIFA World Cup.

Despite a strong squad and fantastic midfield options is Luka Modric the undeniable star of this Croatia. He’s also their best player and most important member. If he can maintain the form he showed in the Champions League final last week then Croatia will be fine. Modric will likely play in a more attacking number 10 role in Russia. He will have license to roam and drop deeper to pull the strings alongside Rakitic and whoever gets the third midfield spot. Modric’s experience, calmness and extraordinary touch and passing ability will be key to make Croatia tick. As captain Modric can make himself immortal if he leads Croatia far.

The Juventus winger suffered a tough injury last year and struggled to get games upon his return this season. Therefore, Pjaca spent the second half of the season on loan at Schalke. He only made three starts and four cameos there, totalling just 260 minutes in the Bundesliga. It’s fair to say Pjaca has had it tough. It’s testament to his quality that he still managed to score twice in Germany though. The 23-year-old winger is a very good dribbler and very direct in his play. He can also create chances with clever passes or crosses. Pjaca won’t start in Russia initially, but he can be a useful player to use off the bench.

For Premier League fans Andrej Kramaric will be an afterthought. The former Leicester man struggled to make a lasting impression in England and escaped to Germany and Hoffenheim. The decision has been vindicated. Hoffenheim finished fourth last year and third this season to qualify for the Champions League ahead of next term. Kramaric has been a key man. This season he scored 13 goals and made six assists for in the Bundesliga. In Russia he will likely start on the right of Croatia’s trio of attacking midfielders but is also an option to start up front. The forward is sure to get plenty of minutes though, and the major public of football fans will get the chance to watch a true gem of a player.

Croatia have one of the most talented squads in Russia 2018 with midfield options few countries, if any, can match. If they manage to successfully integrate their strong attacking with a defensive stability then Croatia can cause anyone trouble. The first target must be to finish ahead of Nigeria and Iceland to qualify from the group. Perhaps even Argentina have to be vary of this squad. Zlatko Dalic will hope the FIFA World Cup in Russia will be his chance to become a Croatian hero.