Serbia qualified for their second FIFA World Cup as an independent nation by winning a tough qualifying group which included the Republic of Ireland and Austria. After their group stage exit at the 2010 finals in South Africa, the Balkan nation will hope they can progress from the group this time around. In this article, we’ll look at their squad, tactics, key man, a young player to watch and a wildcard who can be vital. We also look at new coach Mladen Krstajic who leads Serbia in Russia 2018.

The former Schalke 04 defender was assistant to Slavoljub Muslin during the qualifiers but was given the main job after Muslin was ousted from his job. Muslin’s failure to include some of Serbia’s best young talents was one of the reasons as the Serbian federation feared losing players like Sergej Milinkovic-Savic to other nations. Krstajic promptly included some of the previously uncapped players in his first squad. Krstajic has also talked about producing an alternative to the 3-4-2-1 formation which worked so well in qualifying and has implemented both 4-3-3 and a 4-2-3-1 in his first three games in charge. It will be interesting to see how the former defender sets the team up in Russia.

All through the qualifiers under Muslin, Serbia played a 3-4-2-1 formation. The team defended in a compact 5-4-1 formation and used a positionally-orientated defensive style. The focus was to keep the team as compact as possible and to restrict the opportunity for the opponent to play between their lines. When possession was won they looked to transition quickly from defence into attack through their front three which was often Dusan Tadic and Filip Kostic either side of target man Aleksandar Mitrovic. Plenty of Serbia’s goals in qualifying came from counter-attacks with this trio involved.

Below is an image of Serbia’s defensive shape under Muslin. A compact 5-4-1 which restricts the available space between the lines of Serbia’s defence and midfield. In this scene, the ball is wide on Serbia’s right which sees the right wing-back push higher to press. The remaining four defenders shuffle across to create an auxiliary back-four and give cover to the pressing wing-back. 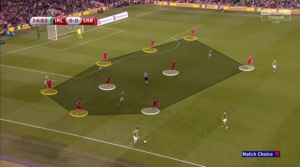 In possession, Muslin’s side altered between a controlled build-up and a more direct approach. The key was to start the build-up from the back-three and the two central midfielders which gave a solid base. The two wing-backs push high and kept the maximum width to create space centrally. Below we see this in practice. The starting positions of the back-three and two midfielders naturally creates triangles and passing angles. These angles helped Serbia play out from the back and move the ball into their attacking players. 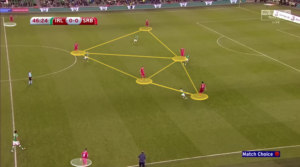 Below we see the midfield box which was created by Serbia’s two wide forwards occupying either half-space. This box midfield gave Serbia a natural numerical advantage in many games which helped them control possession. 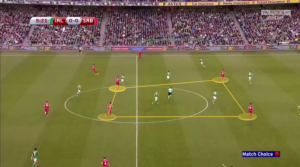 While they did use effective possession play in some games they were most devastating when going more direct. Mitrovic is a fantastic target man with excellent hold-up play. With clever attackers like Tadic behind him, Serbia could easily bypass midfield with long balls to Mitrovic who then laid it off to the attacking midfielders. From there, Serbia would attack quickly with the wing-backs joining the attack. Their wing-play through attacking wing-backs was dangerous all through qualifying with Aleksandar Kolarov on the left having a particularly good campaign.

With Muslin gone and assistant Krstajic in as well as some new faces in the squad it’s been interesting to follow Serbia’s friendlies. Krstajic has stated the importance of finding an alternative to the 3-4-2-1 and has used 4-3-3 and 4-2-3-1 in his games in charge. He used 4-3-3 against South Korea and Morocco but implemented 4-2-3-1 against Nigeria. The scene below is from the Korea game with Serbia lining up in a 4-3-3. There are many similarities with their setup in the 3-4-2-1, especially the way Matic comes deep to get the ball acting almost as a third centre-back. 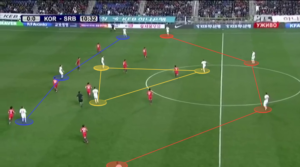 Below is an example of Serbia bypassing Morocco’s press with a long ball towards Mitrovic. He then instantly has Adem Ljajic in support as well as the two wingers ready to spring an attack. 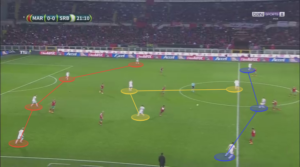 Some notable changes in Krstajic first few games compared to Muslin has been the way he’s set up very attack-minded teams. Against Morocco, Serbia had Tadic, Ljajic, Andrija Zivkovic and Kostic ahead of Matic in midfield. That’s four attacking midfielders/wingers! There’s been a substantially less defensively balanced side compared to Muslin’s setup, to say the least. There has also been a more man-orientated style of defending, especially in midfield. It remains to be seen if that has been the result of having attacking midfielders in deeper positions and them defending off their own instincts or if it’s something Krstajic has decided upon.

Regardless of formation, it seems likely Krstajic will deploy a very attacking team which is sure to entertain but might differ enormously from the defensively sound side we saw in qualifying. Hopefully, for Serbia it won’t be negative.

The Manchester United midfielder will be absolutely vital for Serbia this summer. Regardless of the formation being 3-4-2-1 or 4-3-3, Matic will be the most important player in the team. His importance comes from the extremely attacking midfielders likely to line up alongside him. Players like Milinkovic-Savic, Ljajic and Zivkovic are genuine creators but lack the defensive discipline to maintain a perfect balance. This is where Matic comes in. His physicality and intelligence in front of the defense will be key to any success for the Serbian team. His own creative output would likely increase with Luka Milivojevic next to him with the Crystal Palace then balancing up the presence of a freer third midfielder. Matic’ passing and intelligence in possession will also be important in bringing the ball from defense and into the attacking players. The defensive midfielder’s experience from big games will also help his younger teammates through tough games in a pressurized situation. To summarize, Nemanja Matic will be Serbia’s absolute key man in Russia tasked with balancing a very attack-minded midfield.

The Lazio midfielder has been fantastic in Serie A this season. From his position in central midfield, Sergej has scored 14 goals as well as making six assists. He averages 1.5 key passes per game and makes 1.5 dribbles per game on average. Milinkovic-Savic is a complete attacking midfield player capable of producing magic in the final third. His strength and physical frame make him a good target player too. In the penalty area, his well-timed runs and strong aerial play makes him a huge threat. His average of 2.9 aerial duels won highlights this area of his game.

Actually, one of the reasons Slavoljub Muslin lost his job despite leading Serbia into the World Cup was his resistance to include Milinkovic-Savic in the national team. The Serbian football association feared the supremely talented midfielder, also eligible for Spain, would slip through their fingers. Mladen Krstajic will likely make Milinkovic-Savic a key man of his starting eleven in Russia and the midfielder’s role will depend on the tactics the coach deploys. In a 4-3-3 he’s perfect for the left-sided central midfield position. In a 4-2-3-1 he could easily be the number 10. If Krstajic reverts back to the 3-4-2-1 then one of the attacking midfield positions behind Mitrovic would be perfect. Nonetheless, Milinkovic-Savic will be one of the most exciting players to follow during the World Cup. After the tournament, the Serbian is tipped for a mega-money move to one of the European giants.

The attacking midfielder Adem Ljajic has had a controversial international career. He was banned from the national team squad under Sinisa Mihajlovic because he refused to sing the national anthem. Serbia’s national anthem God of Justice reads: “God our Master! Guide and prosper the Serbian lands and Serbian race!”. Ljajić, a Bosniak Muslim, stayed silent and Mihajlovic was outraged. He has then been in and out of the squads over the last half-decade but Krstajic seems to trust the creator.

On the pitch, Ljajic is a phenomenal attacker. Capable of playing in a central role or on the left-wing, Ljajic is one of the most gifted attackers in Europe. His problem has been consistency. He’s had splendid periods at Fiorentina, Roma and now Torino but has rarely managed to build the streak of consistent excellent he’s ability warrants. The last two seasons at Torino has been among his best. Last season he scored ten goals and made eight assists in Serie A. This season he’s scored six goals and made ten assists in only 23 starts. He also averages 2.5 key passes per game. His technique, dribbling, passing ability and vision is fantastic and Ljajic is always a joy to watch. Luckily, Krstajic seems to trust him and has used the attacker in central midfield in his 4-3-3 and as the number 10 in his 4-2-3-1. It will be interesting to see if he’s given the chance in Russia because if he is then the 26-year-old can finally introduce his immense quality to the wider football audience.

Serbia has a really good squad of players in all positions and comes off a strong qualifying campaign. The change of coach has led to an element of unpredictability of the side, however. Will the strong defensive performances continue? Will the newly included youngsters like Milinkovic-Savic take the side to higher levels? Will Krstajic change the system and style of play? The questions surrounding the Serbian national team are many. In a group with Brazil, Costa Rica and Switzerland, Serbia will need to be at their absolute best to progress. They undoubtedly have the quality. But will they have the organization and balance needed to succeed? Regardless, this Serbian national team will be exciting to watch at the FIFA World Cup in Russia 2018.