Switzerland managed to win nine out of ten in the qualifying campaign for the FIFA World Cup in Russia. But the lost in the last game against Portugal forced them into a play-off. There they beat Northern Ireland 1-0 on aggregate to qualify for Russia 2018. Going into the tournament Vladimir Petkovic men will hope to build on their performance in Brazil 2014. There they went out to Argentina in the last eight. Let’s take a look at the Alp nation.

Vladimir Petkovic was born in Sarajevo and played professionally in the former Yugoslavia including three spells at FK Sarajevo. He then spent twelve years in Switzerland before becoming a coach. He spent fourteen years coaching in the Alps before moving to Turkey and then Rome to coach Lazio. He won Coppa Italia at Lazio in 2013, beating Roma in the final. Petkovic was appointed as Swiss coach in December 2013 due to take over after the 2014 FIFA World Cup. This agreement prompted Lazio to sack him ten days later. After taking the reigns of the Swiss team, Petkovic led them into the 2016 Euro’s. He then led them into the last eight in France but lost on penalties to Poland. Now successfully leading Switzerland to Russia 2018 too, Petkovic will hope to lead his adopted country far.

Note: That’s 26 players above. Three will be removed from that list on June 4th.

Switzerland under Petkovic is a very attacking team. They look to dominate games with the ball and always try to play out from the back. The formation is most often 4-2-3-1. Petkovic did however opt for a 4-3-2-1 in the recent 6-0 demolition of Panama. In Russia however it seems likely Petkovic will opt for the more familiar 4-2-3-1.

As stated, Switzerland looks to build from the back. They split their two centre-backs wide and push the full-backs high. The two central midfielders make themselves available to pick the ball up from defenders and then progress the ball forward. The setup can be seen below (full-backs in yellow). 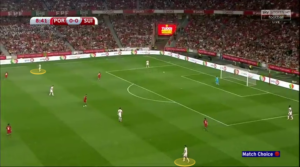 Further up the pitch, the wingers move inside and search for short passing combinations with the number 10 and the striker. The flanks are largely left open for the two very attacking full-backs. Below we see the attacking setup. I’ve highlighted the two central midfielders in yellow and the full-backs in black. The four highest players are the two wingers, the number 10 and the striker. This centred approach hopes to create short passing combinations between the front four. This forces the opponent to centralize their shape, leaving the flanks open if it’s impossible to progress the ball centrally. On this occasion, the ball is played into the striker who flicks it through for a teammate to score. 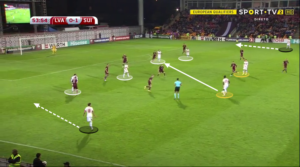 This setup is very attacking and basically sees Switzerland attack in a 2-2-6 formation. If the ball is lost there will be plenty of space for the opponent to counter-attack into. But it also forces the opponent to commit players to defensive action which reduces their threat on the counter.

Defensively Switzerland’s 4-2-3-1 becomes a 4-4-1-1 or 4-4-2. The number 10 often joins the striker to create a front-two when pressing. This initial pressing line is then backed up by a second line consisting of the midfield and a third consisting of the defense. Switzerland usually start their press just ahead of the centre-circle and look to keep a compact and balanced shape. When there’s an opportunity to press, however, they commit men forward and push high with the team. If possession is won they then look to counter quickly through their speedy attackers. Below is an image of their defensive shape. 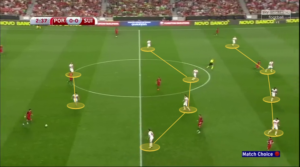 In a team as attacking as Switzerland will likely be in Russia the defenders need to be on top form. Deportivo La Coruna defender Fabian Schär and centre-back colleague Johan Djourou will often be left alone at the back when their teammates surge forward. Schär’s importance can therefore not be underestimated. Once tipped for a big future, Schär was this season relegated from the Spanish top flight. A good FIFA World Cup can go a long way in earning him a big move this summer.

Much was said about Breel Embolo when he appeared for Switzerland at the 2016 Euro’s. The forward was linked to big clubs all across Europe but ended up signing for Schalke 04. A smart move it seemed at the time for Embolo would be given game time and opportunity to grow. Two years later though, Embolo’s career has somewhat stalled. He hasn’t been the roaring success he was hoped to be but the potential remains there. At only 21, Embolo can be a wonderful player to watch and will probably get plenty of chances on the pitch this summer.

Five goals in thirteen international games is a great return for Mario Gavranovic. The striker can be fantastic at times but also go missing at others. If he hits his stride though, Gavranovic is a joy to watch. A creative, technical player who thrives just off the front Gavranovic burst onto the scene at Schalke almost a decade ago. He now plays in Croatia for Dinamo Zagreb. Haris Seferovic will start up front, but Gavranovic clever movement and deadly finishing can be devastating from the bench. Watch out.

Switzerland have a good squad and play some very entertaining football. They have been drawn into a tough group though. Brazil are favourites of course but Serbia and Costa Rica will provide tough tests. The Swiss are hopeful Petkovic can lead them into the last eight but it will need strong defensive performances to go with their attacking quality.

More World Cup analysis can be found here and here.