After a disappointing start to the season for Manchester City, Pep Guardiola came to the conclusion that there were certain changes that he needed to make in City’s tactics to improve their form. The players also took responsibility for their roles, and the result was the incredible winning run that they embarked on, which looks certain to have delivered the Premier League title to City by the end of this season, as well as putting them in a good position in the other competitions.

Several players have also shown tremendous form in this period, with the defence being a particular highlight. John Stones and Ruben Dias have formed an almost-impenetrable barrier at the back, while alongside them, Joao Cancelo, described by the media as an inverted full-back, has been one of the biggest success stories of this season. However, we believe that the Portuguese has been much more than that, and in this scout report, we will explain his tactical versatility this season.

As a conventional right-back

Cancelo joined City in a swap deal from Juventus, with Danilo going the other way. He was initially seen as a long-term competitor for Kyle Walker, capable of bombing up and down the flank and delivering crosses into the box when needed.

This heat map shows Cancelo’s positioning against Chelsea from early January. In that game, he played much nearer to the touchline as a conventional right-back instead of going into the centre.

Having played at right wing-back and even as a right-winger previously in his career, Cancelo is therefore quite proficient at attacking the flank from the outside, looking to create opportunities in the final third. 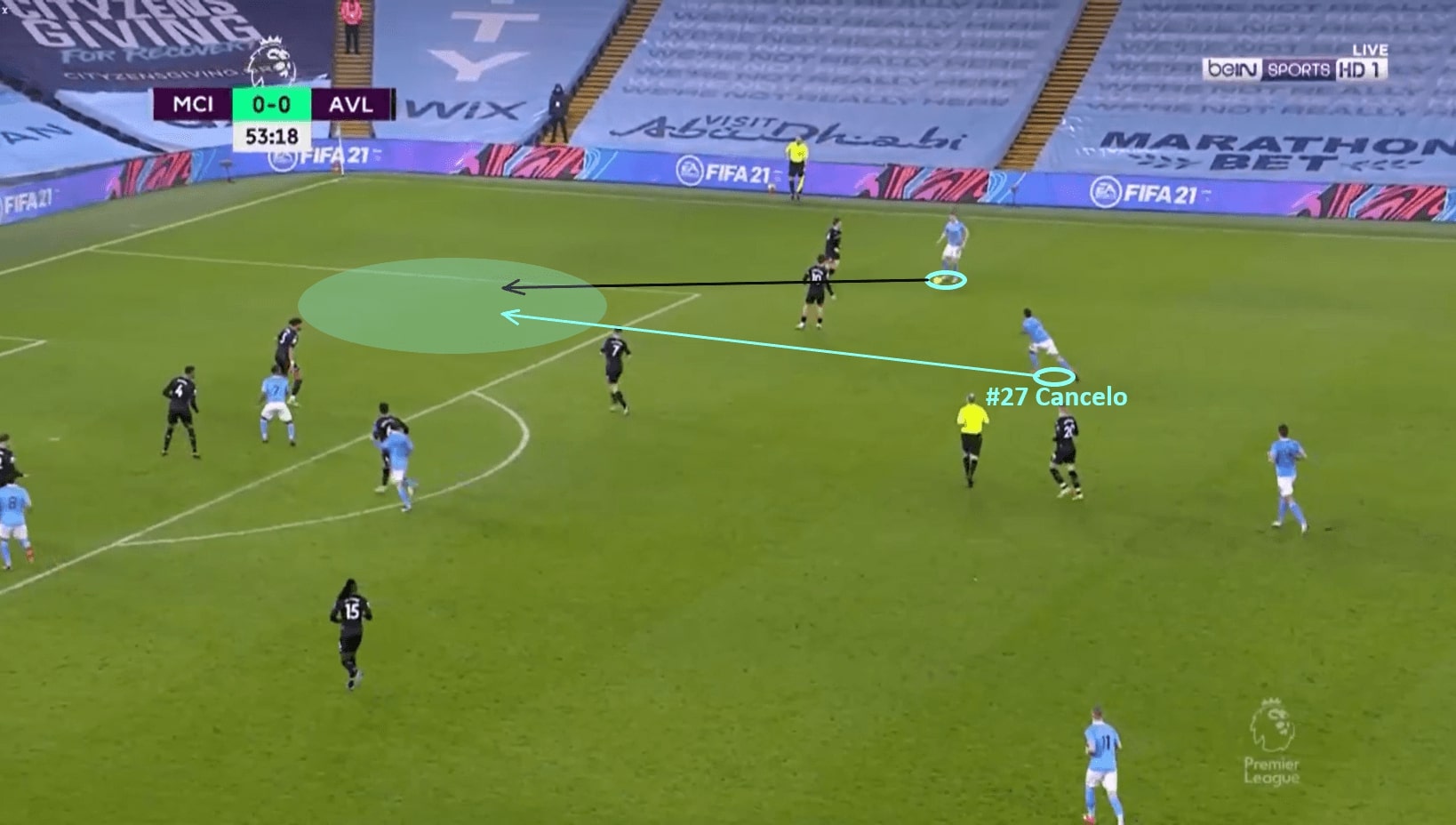 Here, we see how Cancelo was smart enough to judge which spaces were the best to exploit, making an underlapping run of sorts since his teammate was holding the width on the right. He is intelligent enough to know when to hug the touchline and when to make these sort of runs into the half-space.

In this situation against Aston Villa, he noticed that Jack Grealish (#10) was ball-watching, and therefore he was able to accelerate unmarked into the highlighted zone. This may seem like a run-of-the-mill movement, but many full-backs would be happy to stay back and receive a lateral pass from Phil Foden, or stay out wide and leave the central space vacant – this example shows the Portuguese’s intelligence and tactical sense on the pitch. 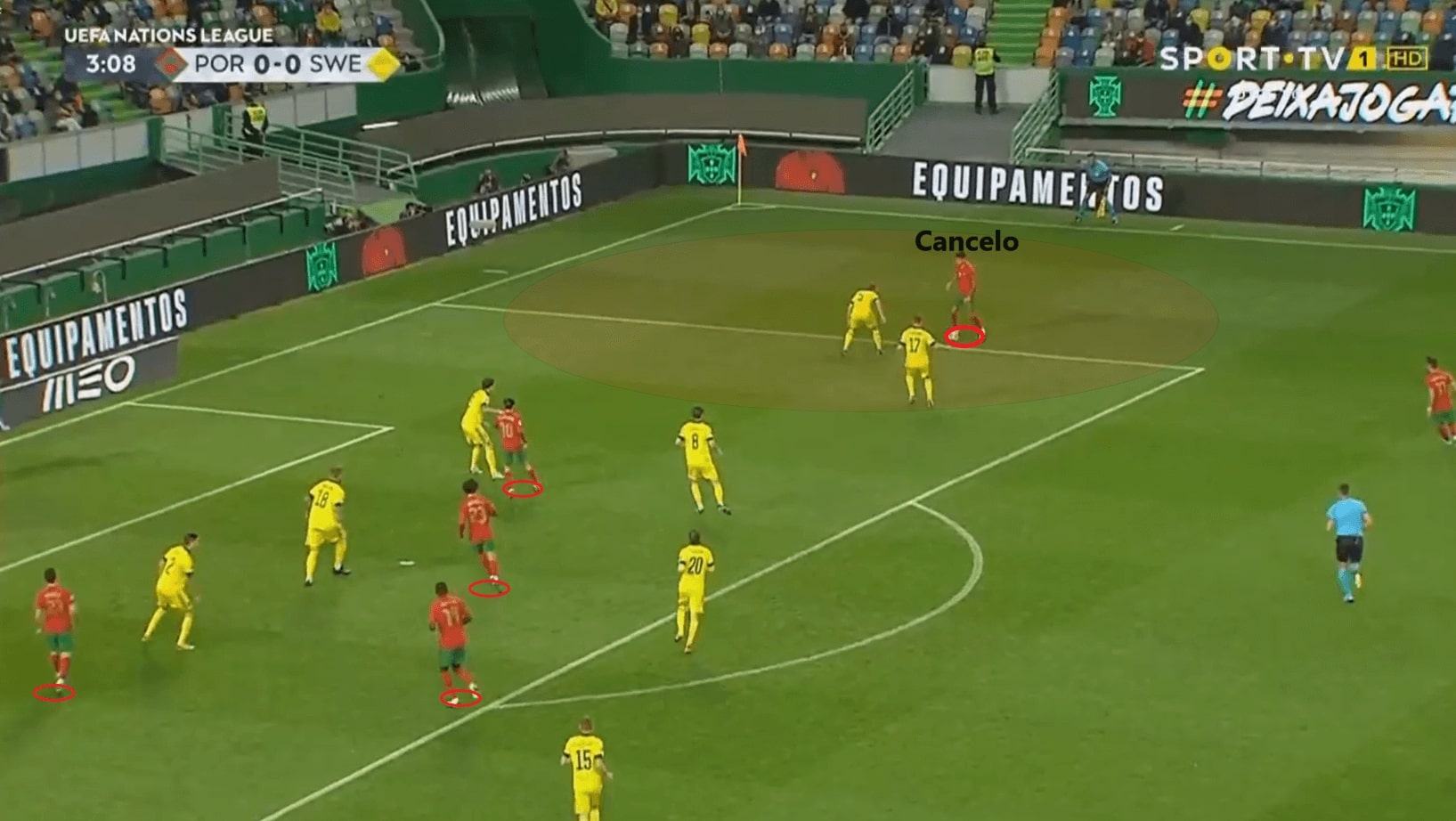 Cancelo’s ability in this regard means that Manchester City have multiple options when looking to attack from the right – they can allow the right-winger to get into the box or roam from his position due to Cancelo’s dominance in the wide spaces.

Even when isolated, Cancelo has the ability to create chances for his teammates. This has largely been his role in the Portuguese national team, allowing Bernardo Silva to play a free role. The image shows how Cancelo was alone against two Swedish players, with his teammates able to take up positions in the box, safe in the knowledge that he would be able to create an opportunity for them.

Dynamism on the left

Of course, Guardiola has also used Cancelo extensively at left-back. This was as a stop-gap measure at first, due to injuries to Benjamin Mendy and Oleksandr Zinchenko, but the Portuguese played well enough to make himself a first-choice player in this position as well, even though he was playing on his wrong side as a right-footed player.

This allowed him to invert and come infield, which would create problems for opposition players. 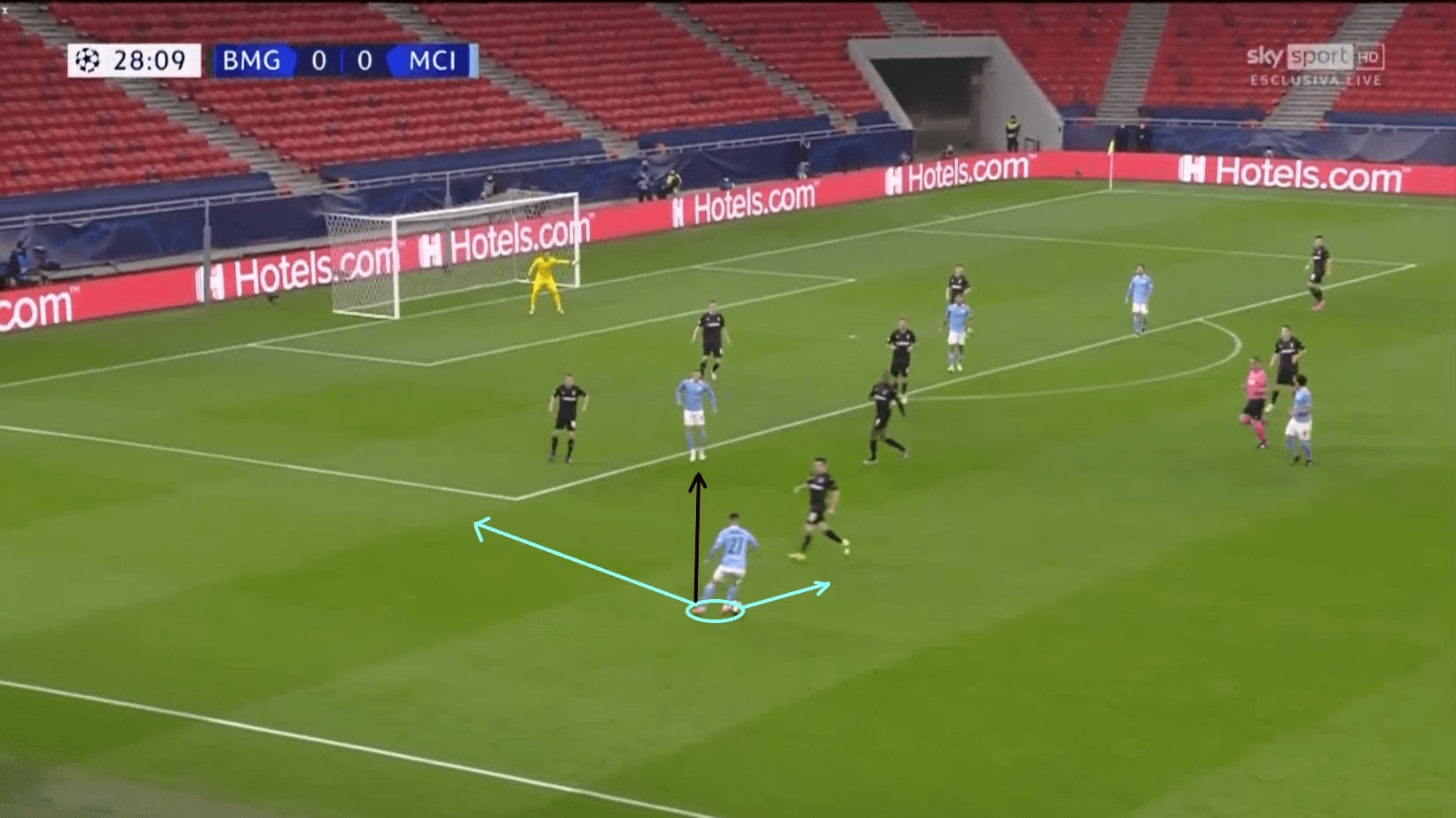 For example, here, when Cancelo is on the left side and on the ball, he has multiple options to pass and move, which creates doubt in the minds of opponents and opens the pitch up for him. He could go to the byline and cross, as the flank is open with the opposition defence staying narrow. He could pass to the teammate offering support, or cut back inside onto his stronger foot. Being right-footed gave him that last option, whereas a traditional left-footed left-back would have not considered that move.

He times his move inside perfectly, catching the defender off-guard and therefore creating space for himself to carry the ball infield. 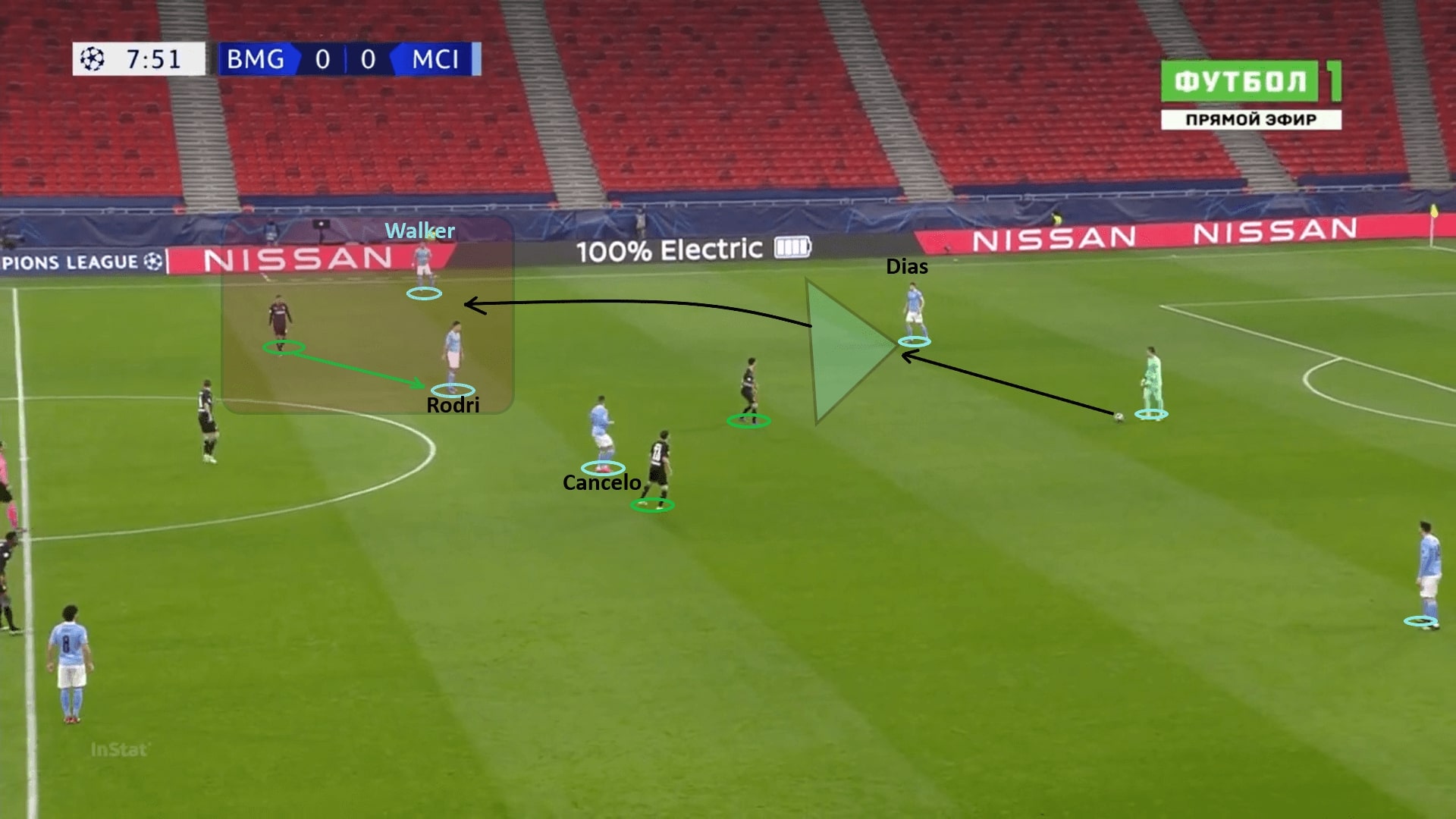 Of course, Cancelo can also invert and come into central areas when playing at left-back. He can form a double pivot with the defensive midfielder during City’s build-up, which can help outnumber opposition attacks and help City play out through their press.

For example, in this example from the game against Borussia Mönchengladbach in the UEFA Champions League, City’s build-up needed two players ahead of the centre-backs in order to play out when facing Gladbach’s 4-4-2 block. Cancelo helped in this regard, manipulating the positioning of the winger tracking him, as that player was forced to come narrow to track him, which then opened up the pass out wide. This shows how he has been able to influence City’s play, especially in their own third, through just his positioning.

This has also played a role in allowing İlkay Gündoğan to move higher up the pitch, and the German international has been one of the most influential players for City this season, consistently getting into the box to score goals. 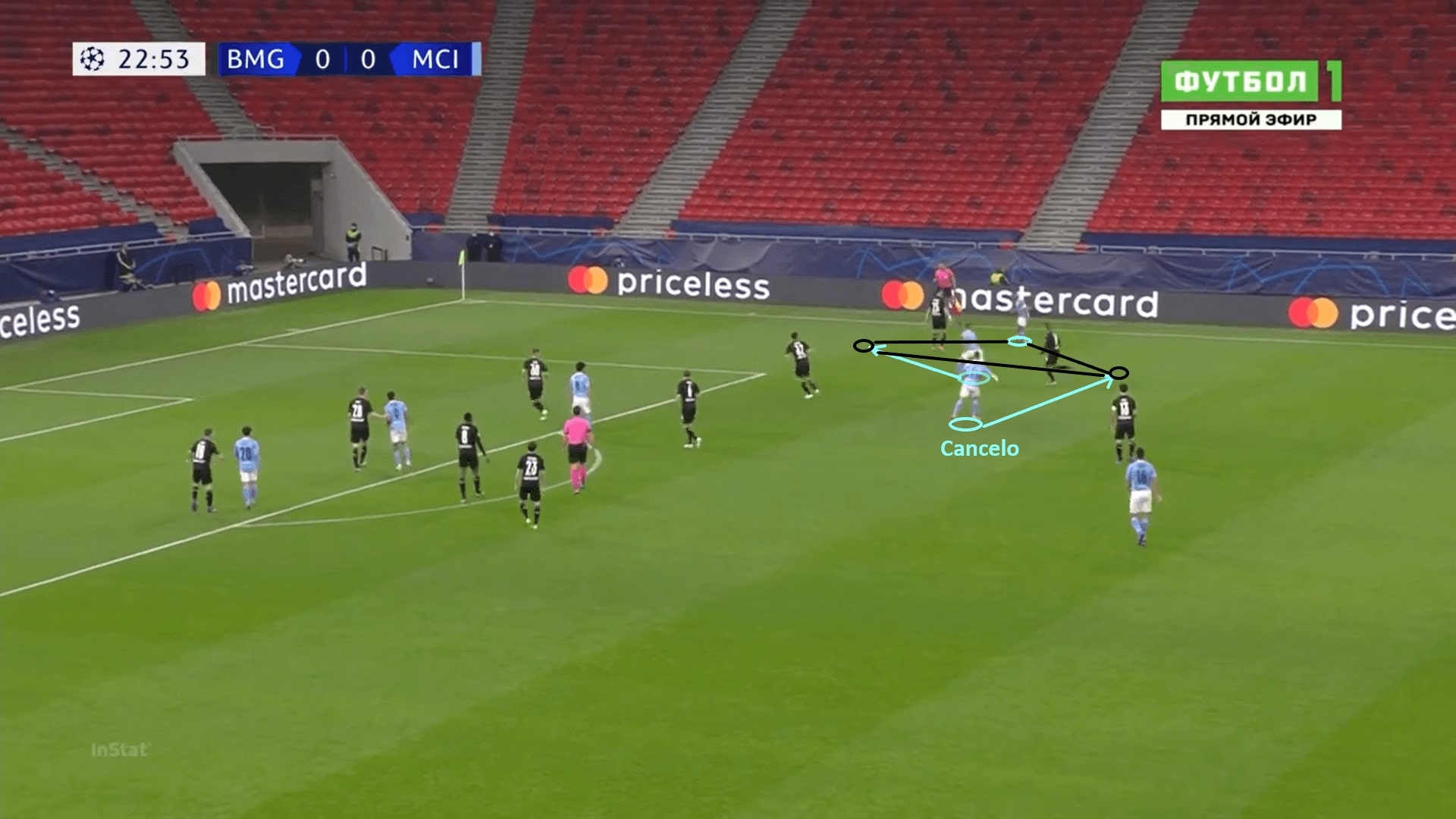 It is for this reason that we stated earlier that his role at City this season has gone beyond just being an inverted full-back. Cancelo has been given the freedom to roam from his position, which has seen him pop up all over the pitch to influence City’s play during all three phases of possession.

For example, in the same game against Gladbach, despite nominally playing at left-back, here we can see how Cancelo is on the opposite side of the pitch during a City attack. He is helping to recreate a passing triangle with Raheem Sterling and Foden to help overload the flank and progress the ball quickly.

Cancelo has the intelligence and technique to be able to play in this sort of free role, while Rodri stays deeper as the more traditional defensive midfielder.

Cancelo’s performances for City this season have led many to believe that he should be classed as a midfielder, as he has performed many of the roles and duties one would expect to see from midfield players.

The above heat map shows Cancelo’s activity in the FA Cup game against Birmingham City in January. The evolution is obvious – he rarely went to the touchline in the central and offensive third, despite nominally playing at full-back. Thus, in the context of this game, classifying him as a midfielder is a more accurate description of his work, and this has been seen on multiple occasions this season. 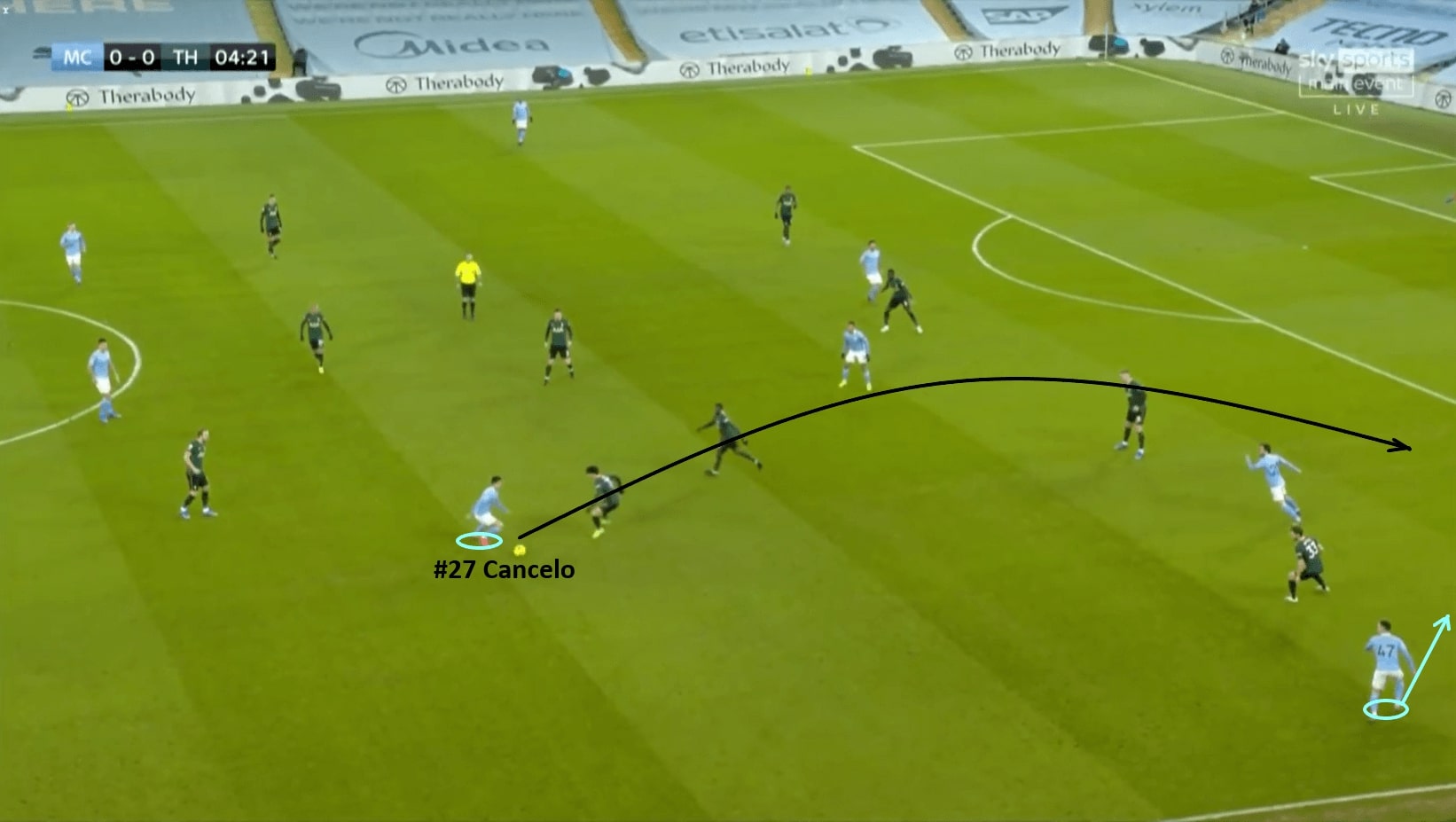 Cancelo’s ability on the ball is a big reason why Pep trusts him to play in the centre when needed, and this has also had a big role in City reverting to the use of wide conventional wingers that was last seen a couple of seasons ago.

This example, from the game against Tottenham, shows Cancelo’s ability to play a release ball from the half-space. He has shown a good understanding with whoever has played off the right for City this season, whether that is Sterling, Foden, Silva or Riyad Mahrez, and so City have usually been able to enter zone 18 with a simple one-two involving Cancelo and the winger. 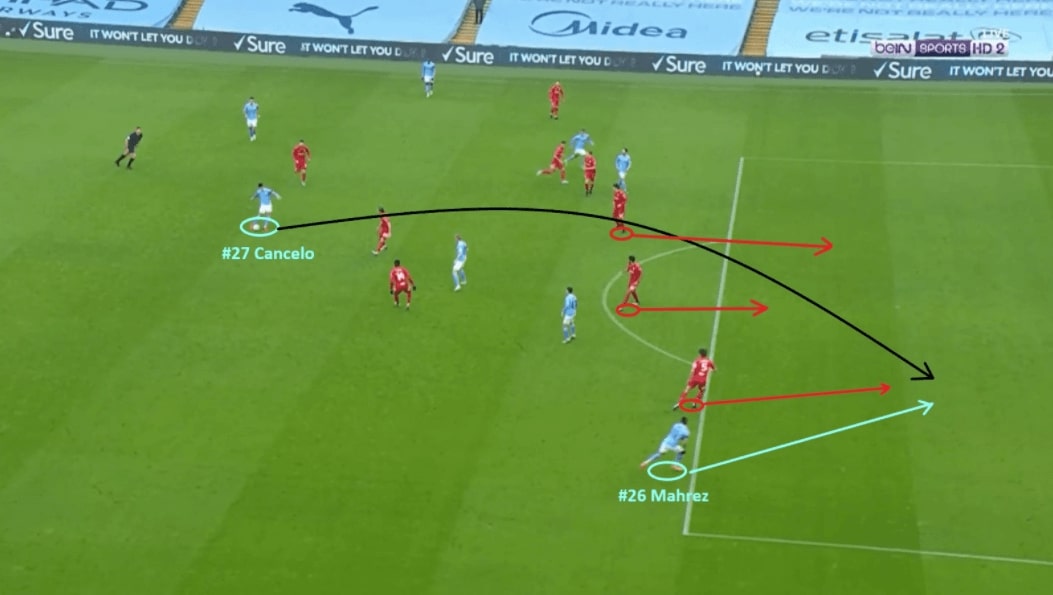 Receiving at a more central position, Cancelo could utilize his diagonality to release the winger behind the defence. The example was City’s goal against BCFC, with Cancelo lofting the ball to Riyad Mahrez perfectly.

Manchester City have scored goals in a  similar manner against Newcastle United and West Bromwich Albion this season as well, showing how this tactic has had an impact in the final third. 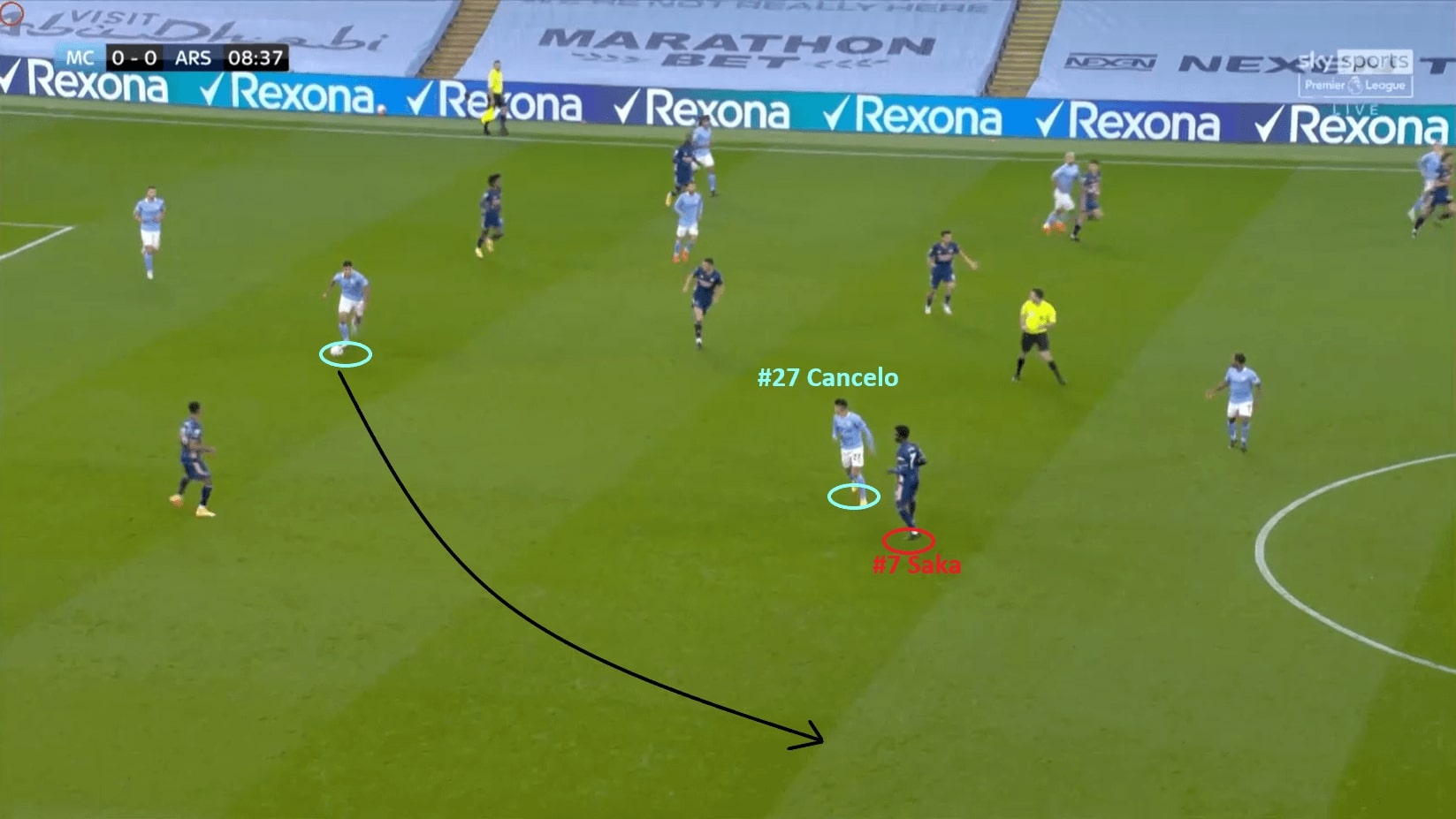 Apart from providing ‘second assists’ in the final third, Cancelo’s central role has also helped City a lot in the first and second phase. We have already seen earlier how his positioning forces the opposition winger to either track him and open space up on the flank, or leave him unmarked.

If the opponent did not want Cancelo to get on the ball, as in Bukayo Saka’s position, as shown above, the left-winger must get tight and give up wider spaces. Deliberately, the passing channel towards the outer zone, which was now freed was enlarged. City could exploit those spaces because of Cancelo’s ability to unmask a passing lane. 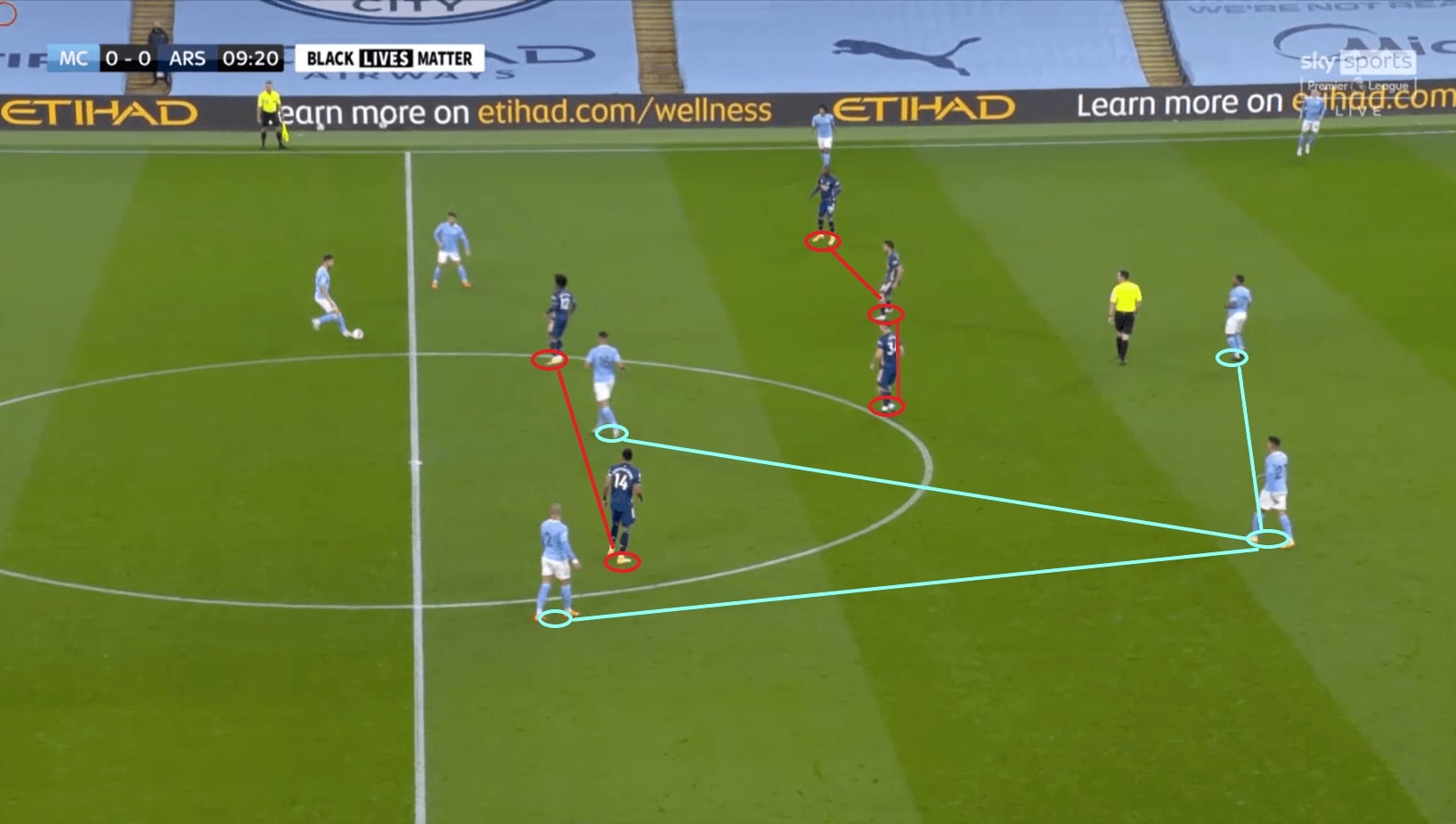 In the second phase, City need their players to manipulate the opposition’s second line, and Cancelo can help here as well. Another example from the same match shows Cancelo’s positioning, midway in Arsenal’s half, and behind Arsenal’s second line. This meant that City had two players in between Arsenal’s lines, and the Gunners could be opened up with a pass over the top from Dias. This also shows the dilemma for Arsenal – press the backline and Sterling and Cancelo’s positioning means that they can be easily found with a pass over the top. Sit back, and that would allow Dias and Rodri more time and space to bring the ball out and manipulate Arsenal’s positioning before releasing the ball.

Cancelo’s positioning is crucial here, as it means that City have two players offering a vertical threat, which is more difficult for Arsenal to close down, than if Cancelo had been in a wider position. This is the perfect example of how Cancelo has played a big role in affecting City’s play across all the phases of their game this season.

As we have seen in this analysis, Cancelo has shown how he has the ability to play multiple roles in multiple positions, and he has almost redefined the role of a full-back, certainly in Pep Guardiola’s systems.

The last heat map here shows Cancelo’s average position for the season. This is perhaps the best way to summarize the qualities that we have analyzed in this tactical analysis – he can play everywhere.

His positional flexibility has been a real asset for City this season, and the Portuguese full-back has played a big part in the Citizens stealing a march on their domestic competitors for the Premier League title.

Of course, he was far from perfect, there were still rooms for improvement. For example, playing at the centre, Cancelo would need to learn simplicity and thinking even quicker. He has the potential to become another Phillip Lahm, if he could bring his understanding of the game to another level.