In the summer of 2017, Benjamin Mendy joined Manchester City from Monaco for a fee of €57.50 million. However, the Frenchman has had two very tough seasons at Manchester City. In the ‘Centurion’ campaign, he picked up a cruciate ligament rupture and was out for 198 days; in the ‘Fourmidables’, he had undergone knee surgery, then suffered from a meniscal injury, then, again, a knee problem. He was unavailable until late September of 2019 and played his first game of this season in the Carabao Cup game against Preston.

In general, Mendy is a lot healthier this season. So far, he has started 20 games in this campaign, while playing the big games like, for example, at the Santiago Bernabéu Stadium vs Real Madrid. He has trained under Marcelo Bielsa, Leonardo Jardim and of course, Pep Guardiola. Bielsa said Mendy had the potential to become the best left-back in the world, so, after all the difficulties he has encountered at City, has the Frenchman still got the potential to be the best?

In this tactical analysis scout report, we will show you the strengths and the role of Mendy in Guardiola’s tactics. It is an analysis that focuses on the performance of Mendy in 2019/20 campaign.

The below graph sums up the strengths of Mendy in different domains. Playing in the possession-based playing style of City, the Frenchman has an 85.56% pass success rate this season. Meanwhile, there are two figures that are quite high that we should pay attention to. Mendy has made 6.02 crosses per game in the Premier League, more than any other player, with the completion rate of 38.75%. The dribble success rate of Mendy is also high at 62.96%. We will investigate the above traits with game examples in the coming sections.

Below is the heat map of Mendy for this season. While Guardiola’s inverted full-backs tactics are famous now, Mendy has played more like a conventional offensive left-back instead of inverting to the centre. You can see from this map, the World Cup winner occupied the whole left flank, including being heavily involved in the final third.

First, we’ll try to illustrate the advantages that Mendy creates for the team when he plays as an offensive full-back. City have been without Leroy Sané this season and so they have lacked a conventional winger on the left flank. Therefore, it fell to Mendy to fulfil the offensive job on the left.

When City were attacking from positional plays, the left-winger tended to position himself centrally, occupying the half-spaces or even switching positions with Sergio Agüero. With Mendy’s presence in zone 13 and zone 16, City’s best offensive players were released closer to the goal. Also, the Frenchman had to provide the width and make the pitch as big as possible, as this stretched the defensive shape of the opposition. 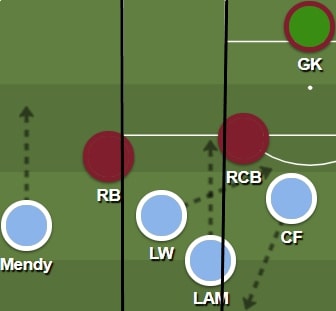 In the following image, you can see how Mendy was occupying the wide channel himself, carrying the ball forward. Meanwhile, his teammates were making forward runs to the box. In such a case, the right-back of Preston (Darnell Fisher) had to choose between approaching Mendy or staying compact with his teammates. If he chose to close down Mendy, then the horizontal gaps between the Preston defenders increased. If he stayed narrow, Mendy also had the pace to carry the ball forward into the wider areas. 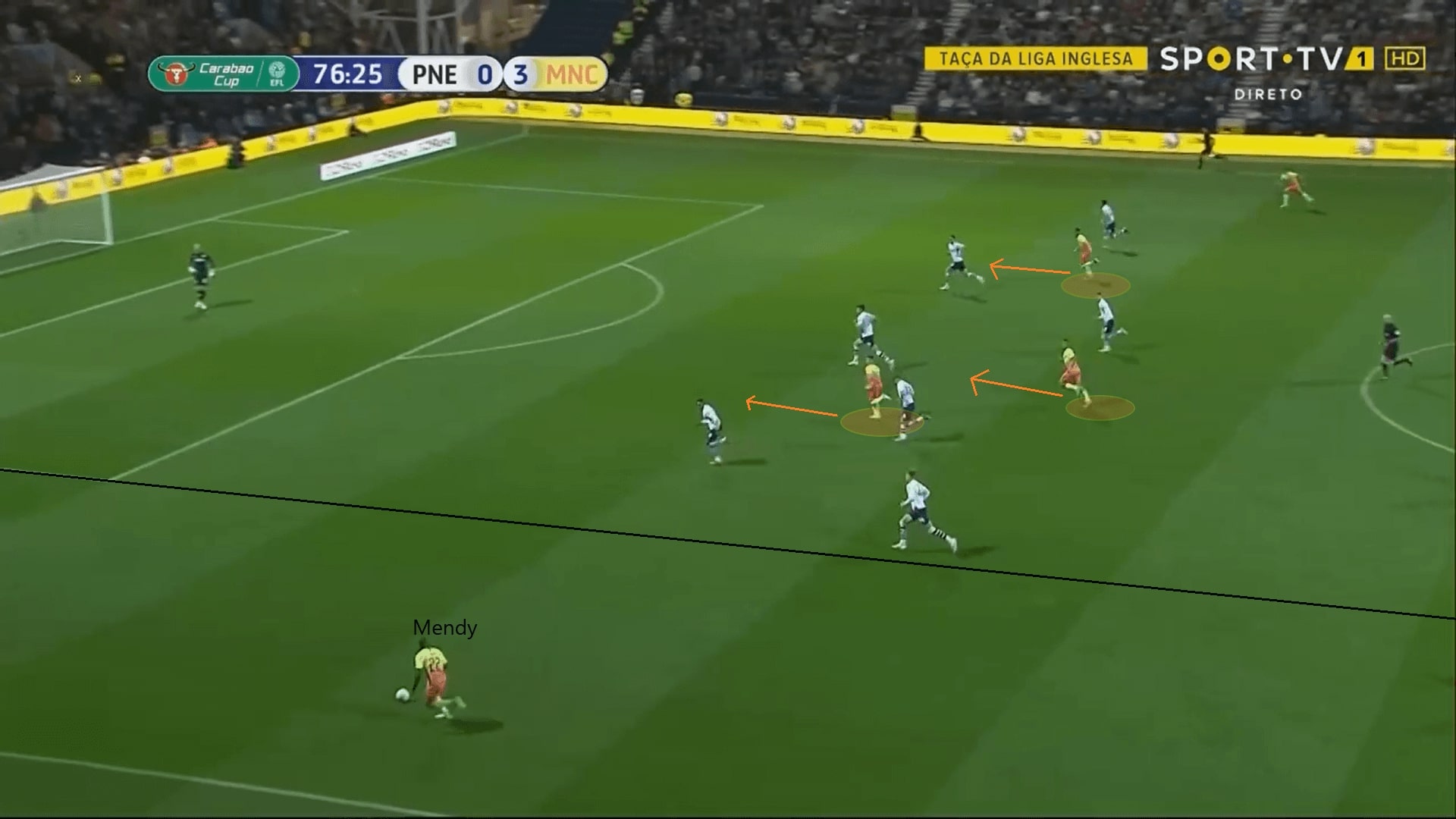 Another image we’ll show you is the classic combination between a winger and an attacking full-back. In this case, Mendy demonstrated his ability to run in behind the defenders. Initially, he passed to Raheem Sterling, who was in the half-space. Then, immediately ran into space behind Daniel Carvajal. The Frenchman was released by Sterling and City had a crossing opportunity. 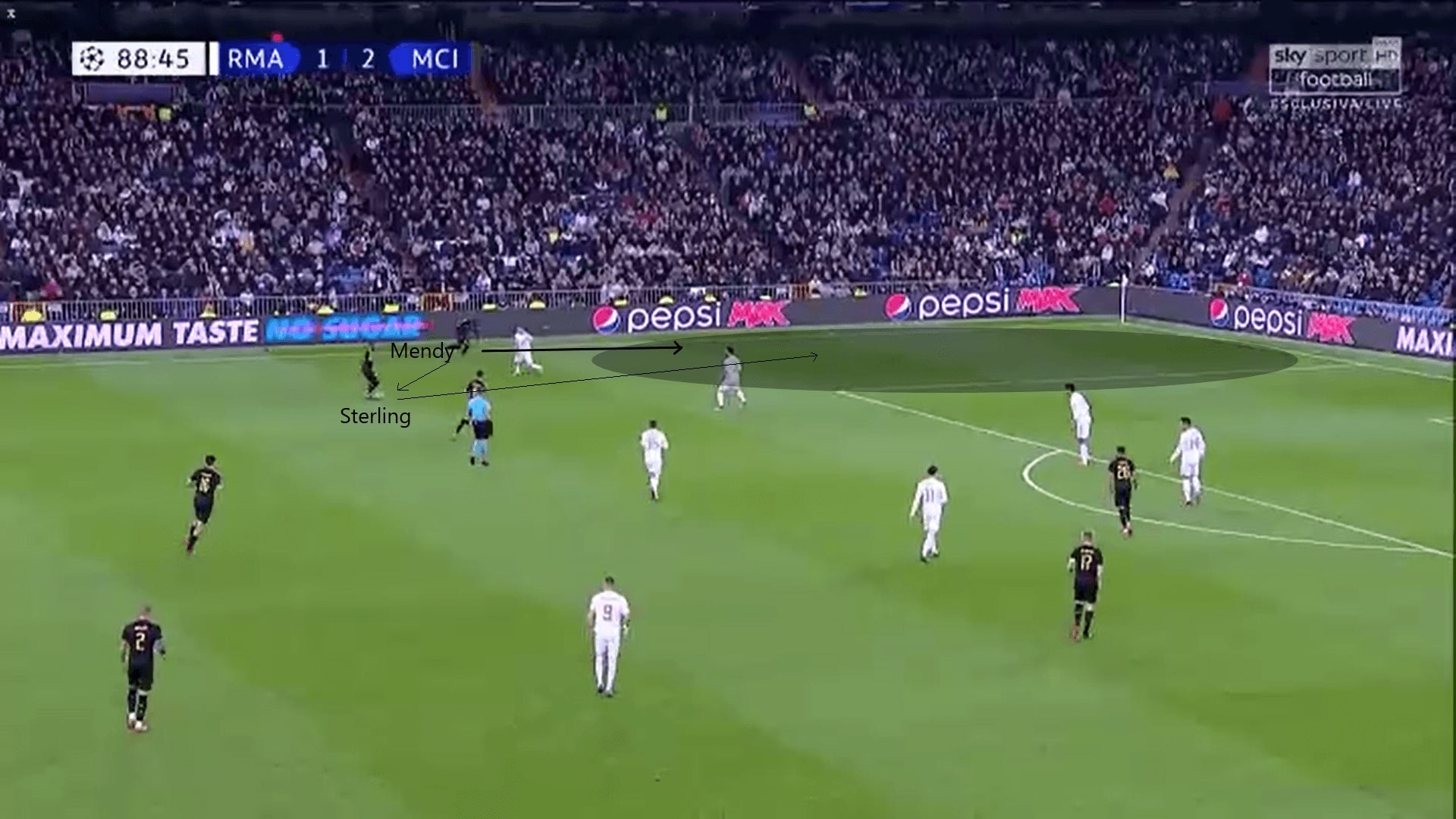 In this scenario, we tried to show you the crossing ability of Mendy. The Frenchman’s 38.75% cross success rate was only behind Bernardo Silva in the league. So, how did he generate those crosses so well?

A key crossing attribute of Mendy is his ability to bend the cross. He could use the inside of his foot to generate a curled cross to the centre, which made the flight and destination very unpredictable for the defenders until the last moment. Also, Mendy has good control in terms of the power and height of his crosses, which made him very good at this technique.

We chose the cross which led to Agüero’s goal against Crystal Palace as an example. In this case, Mendy tried to find the Argentine with a pinpoint cross. The difficulty of this cross was in having to bypass four defenders and reach Agüero’s head at a suitable height. With the strong crossing abilities of Mendy, as explained above, the Frenchman produced a brilliant curled cross to get past the defenders and find Agüero. Despite defending in front of the six-yard box, it was difficult for James Tomkins to judge the destination of the ball as it was pacey and curled. 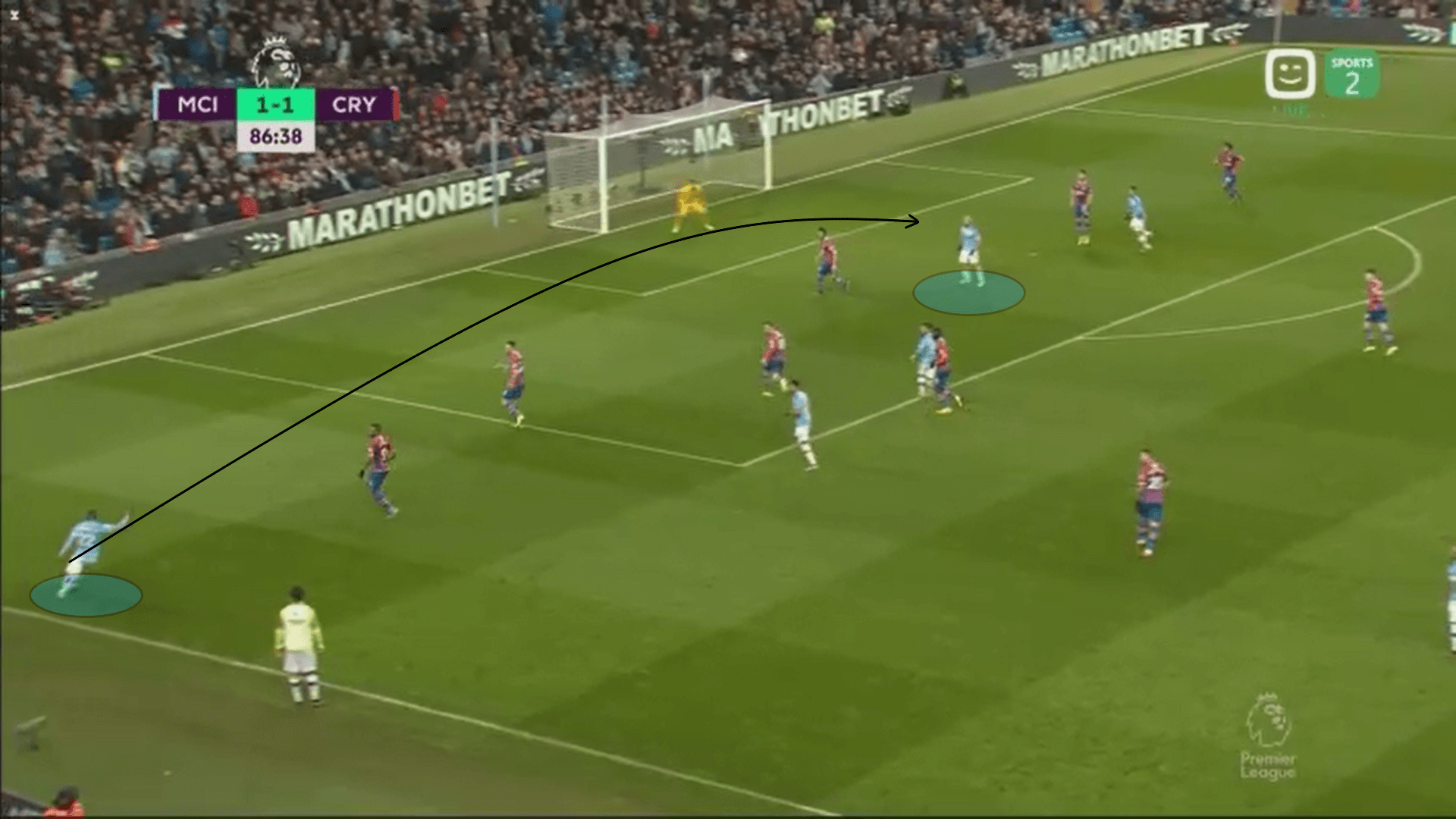 Another strong attribute of Mendy are his in-balls. The Frenchman always makes good passes to the centre, allowing City to continue the attack in a better area.

In this offensive transition against Leicester, Mendy had to pass the ball while Ayoze Peréz was tracking him. He had two visible options: Sterling and Kevin De Bruyne. In this case, passing to Sterling was easier, but Ricardo Pereira was behind him, and so Sterling was likely to lose the ball under pressure, which would stop the counter-attack. However, Mendy found De Bruyne with a comfortable in-ball. No Leicester players were expecting this pass as it was difficult, but Mendy managed to execute it and City reached the Foxes’ box in this counter-attack. 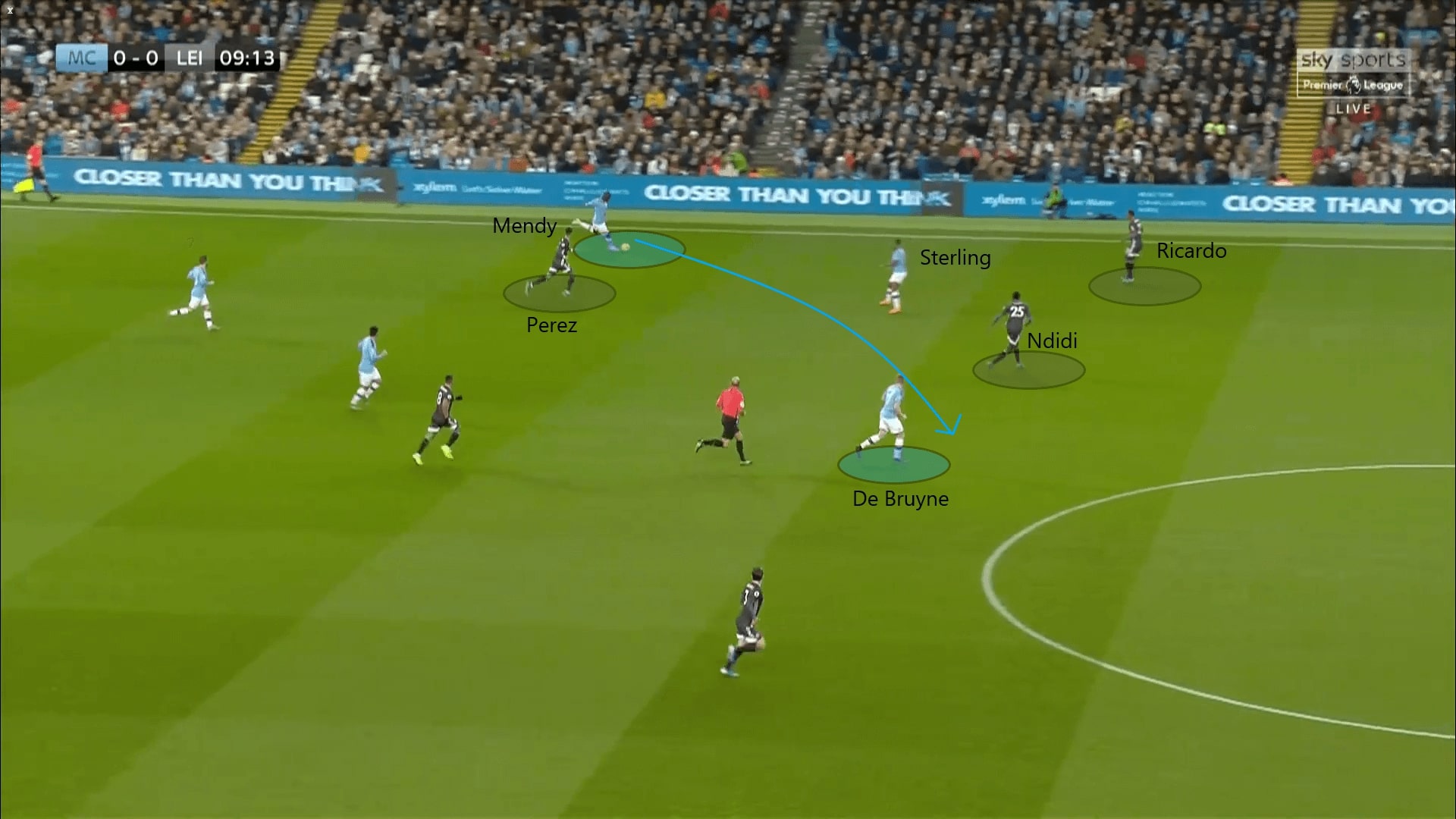 Mendy also exercised his passing ability in the positional plays. He has a good reading of the game, anticipates situations on the pitch and passes well. In this example, B. Silva took away Palace’s right centre-back with a wide movement. This created space for David Silva in the half-spaces. In this scenario, passing to the visible option of B. Silva was easier but lacked progression given the pressure from Tomkins. Mendy’s pass to D. Silva was pinpoint and lethal, as none of the Palace players anticipated this pass, and City reached the box. 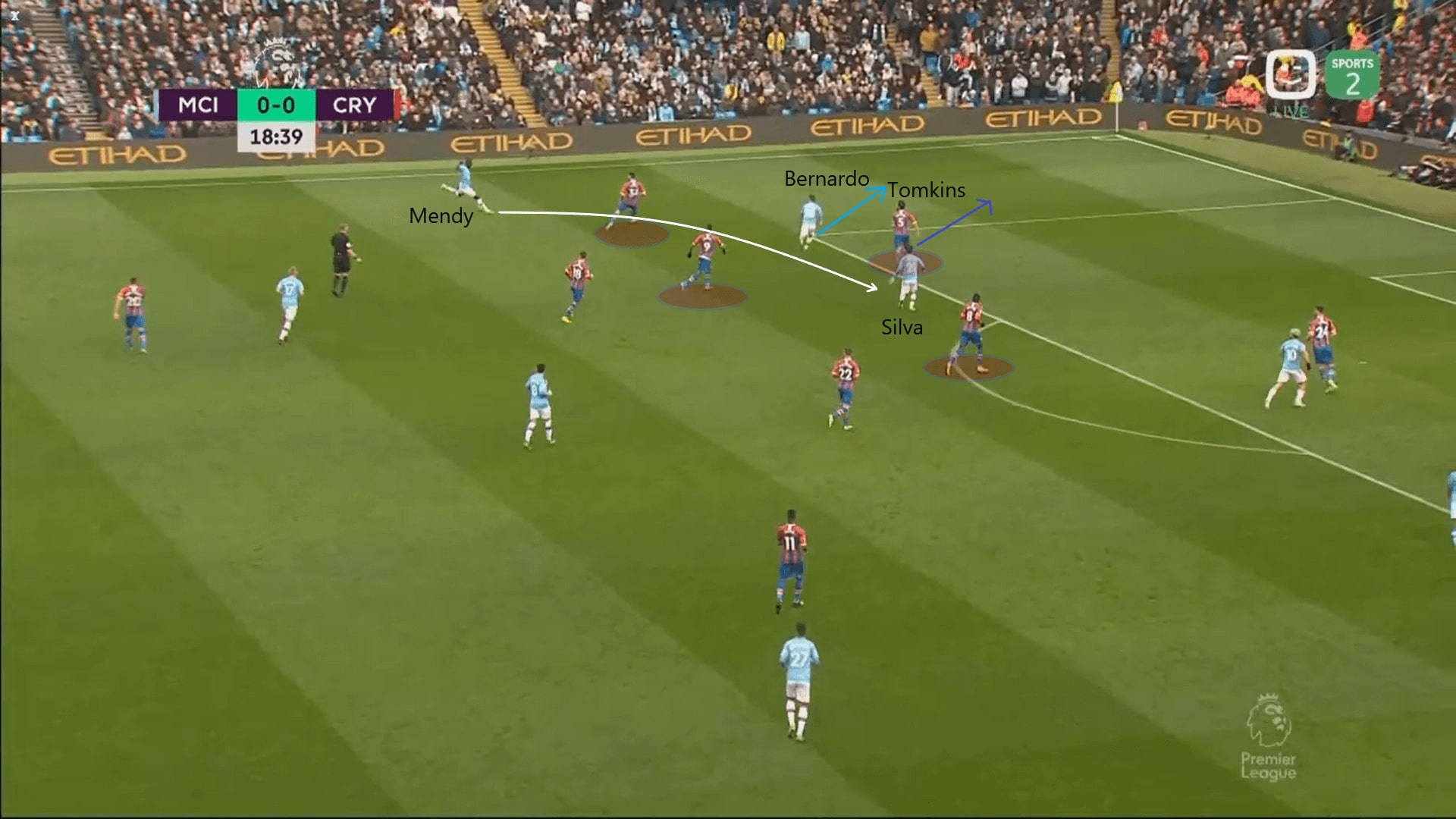 Mendy is also very strong in 1 v 1 situations, this is part of the reason why Guardiola allowed the Frenchman to be isolated on the flank.

In this image, you can see Mendy facing the pressure from Jacob Murphy. Instead of returning the ball safely back to Nicolás Otamendi, he decided to take on the opponent. So, where was he going? As a left-footed player, he was likely to go to the left if he touched the ball with the outside of his boot. However, Mendy went inside and progressed the ball. 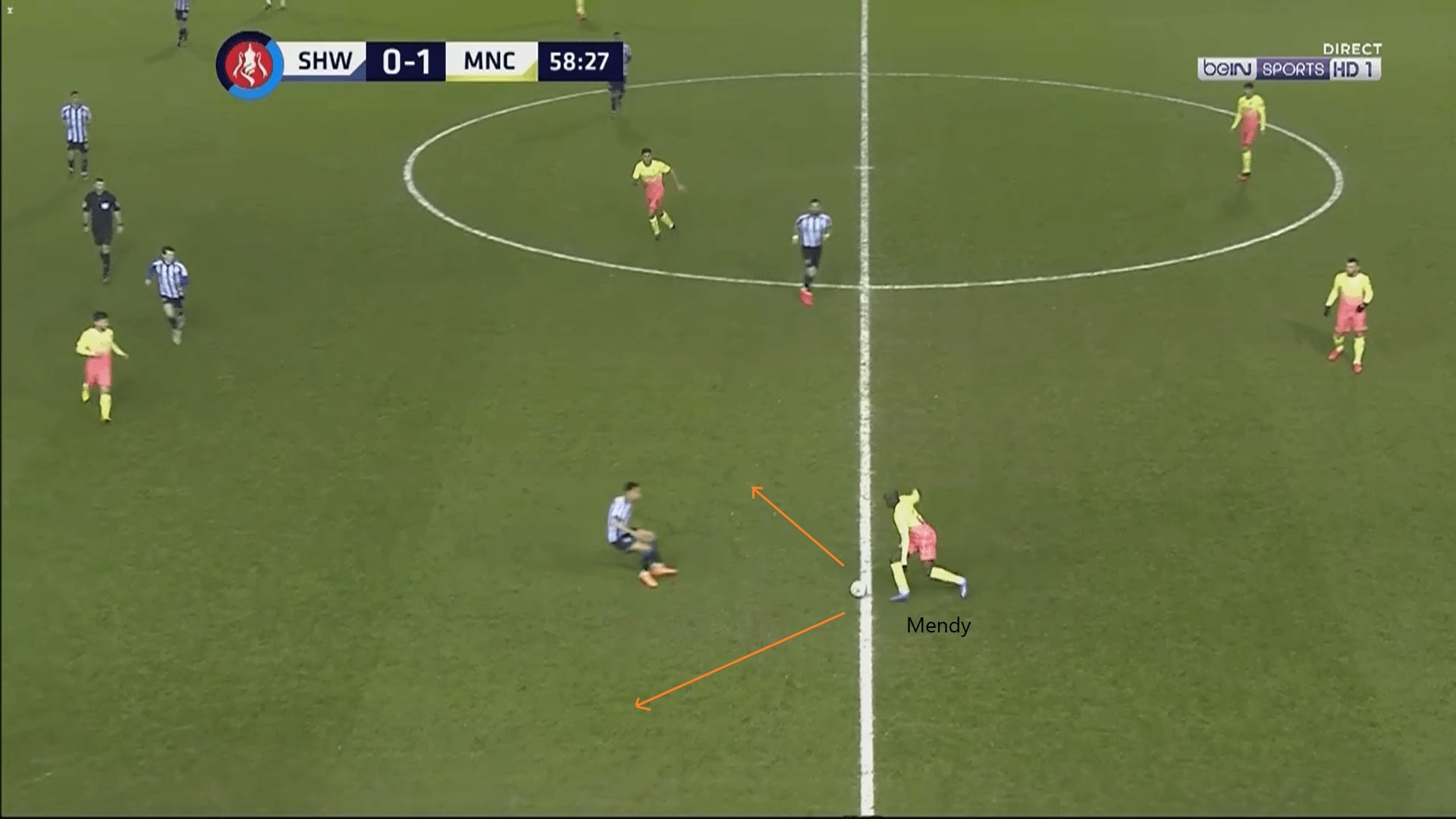 In the above case, the body orientation of the defender was suboptimal, so Mendy could freely choose his direction. In this case, we show how Mendy reacted if he was not allowed to drift inside. In this case, the defender’s body orientation made drifting inside difficult. Mendy reacted well, as he found Riyad Mahrez from a pass via the right side of the defender. Again, the pass should be praised as Mendy made it a curved pass, which avoided the closest opponent and found Mahrez. 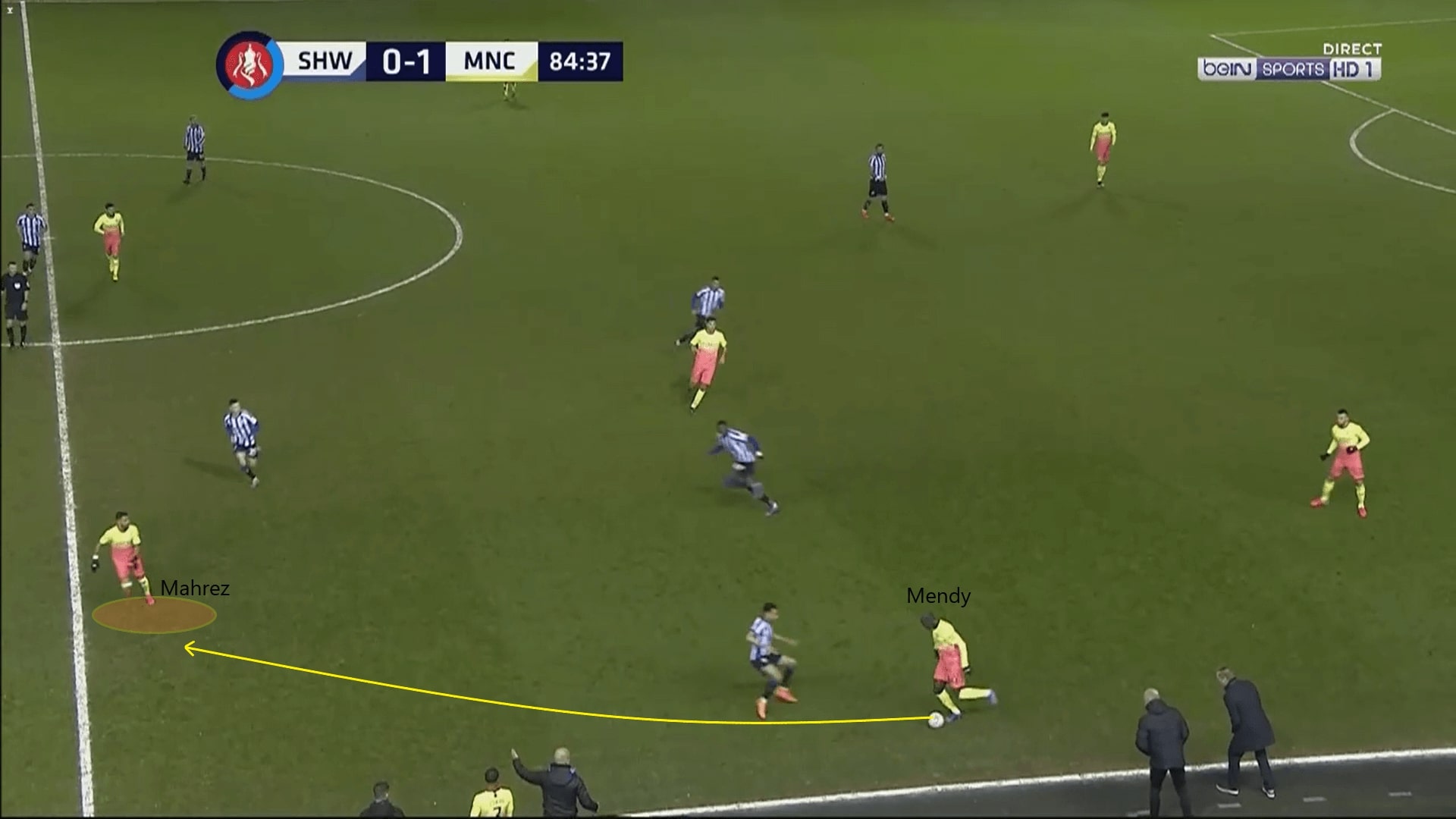 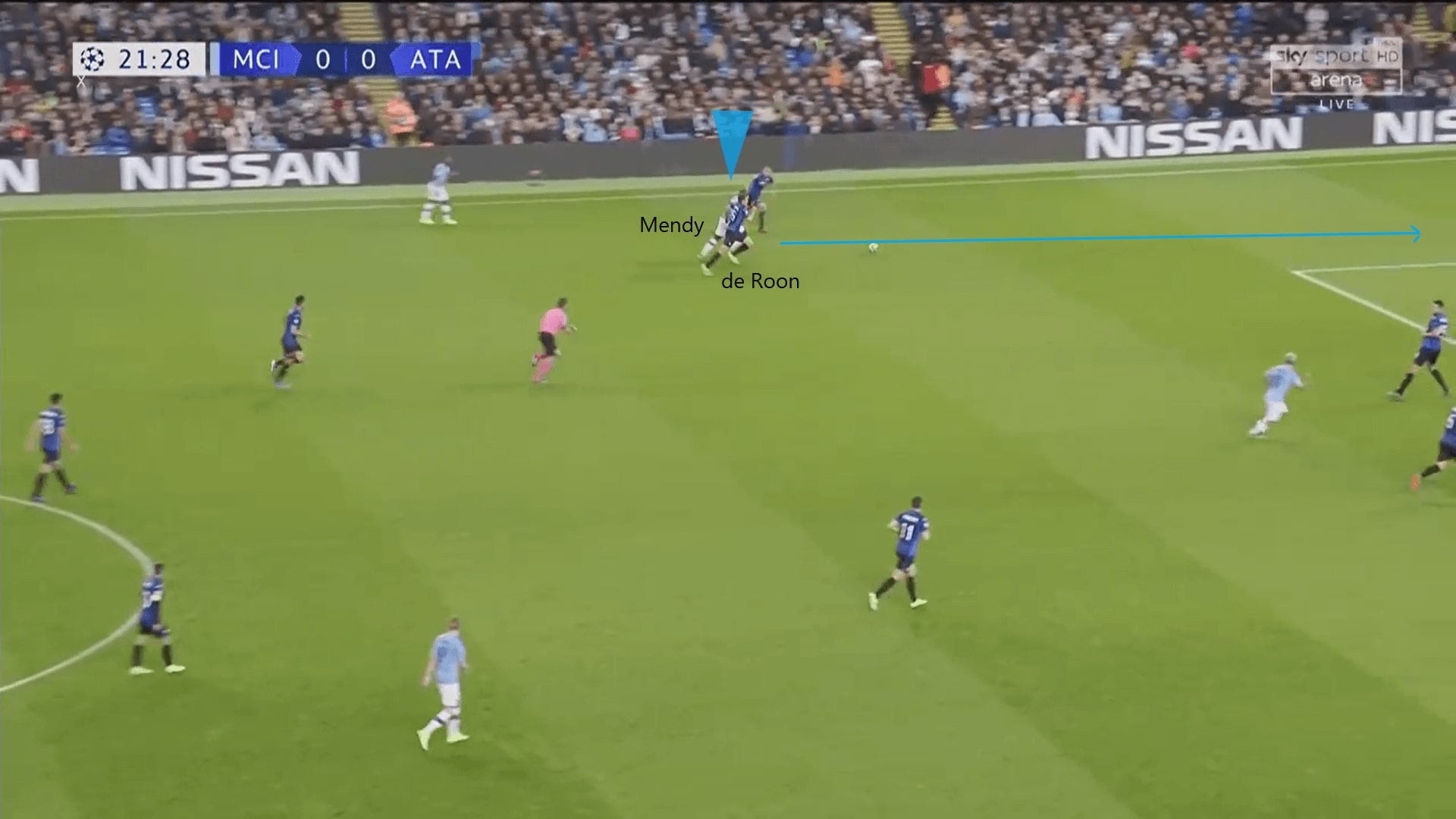 We all know that Guardiola’s City press high to win the ball back. Mendy thus had to be ready to press at any moment, as, once City lost the ball, they were defending. In this section, we will show you three types of the press which involved Mendy.

The first image shows how Mendy cooperated with his teammates. B. Silva was engaging his national teammate, Pereira, on the flank. Mendy quickly read the potential return pass to Çağlar Söyüncü and immediately approached the centre-back. The Turkish defender was under pressure and City won a throw-in. 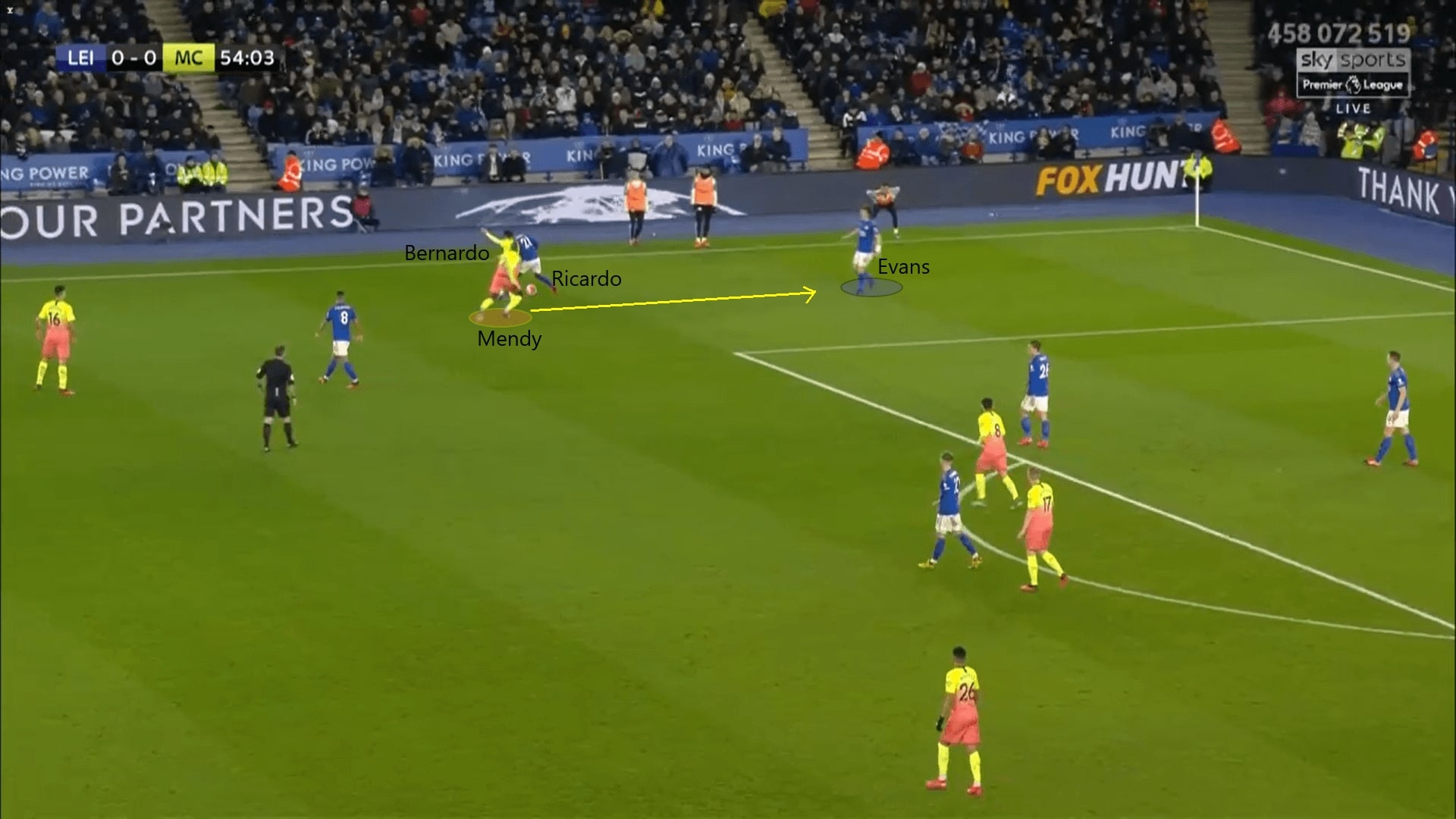 On other occasions, Mendy had to approach the ball carrier on his own. In this image, you can see Mendy was pressing at Isco’s back. In this case, Mendy did not allow Isco to turn or dribble past him. This eventually helped City regained the ball from Isco. Mendy’s contribution was vital in this defence. He maintained balance in the challenge, with a proper body orientation to force Isco to drift to the byline. Meanwhile, he did not try to steal the ball as any reckless defensive action could let Isco dribble past him. 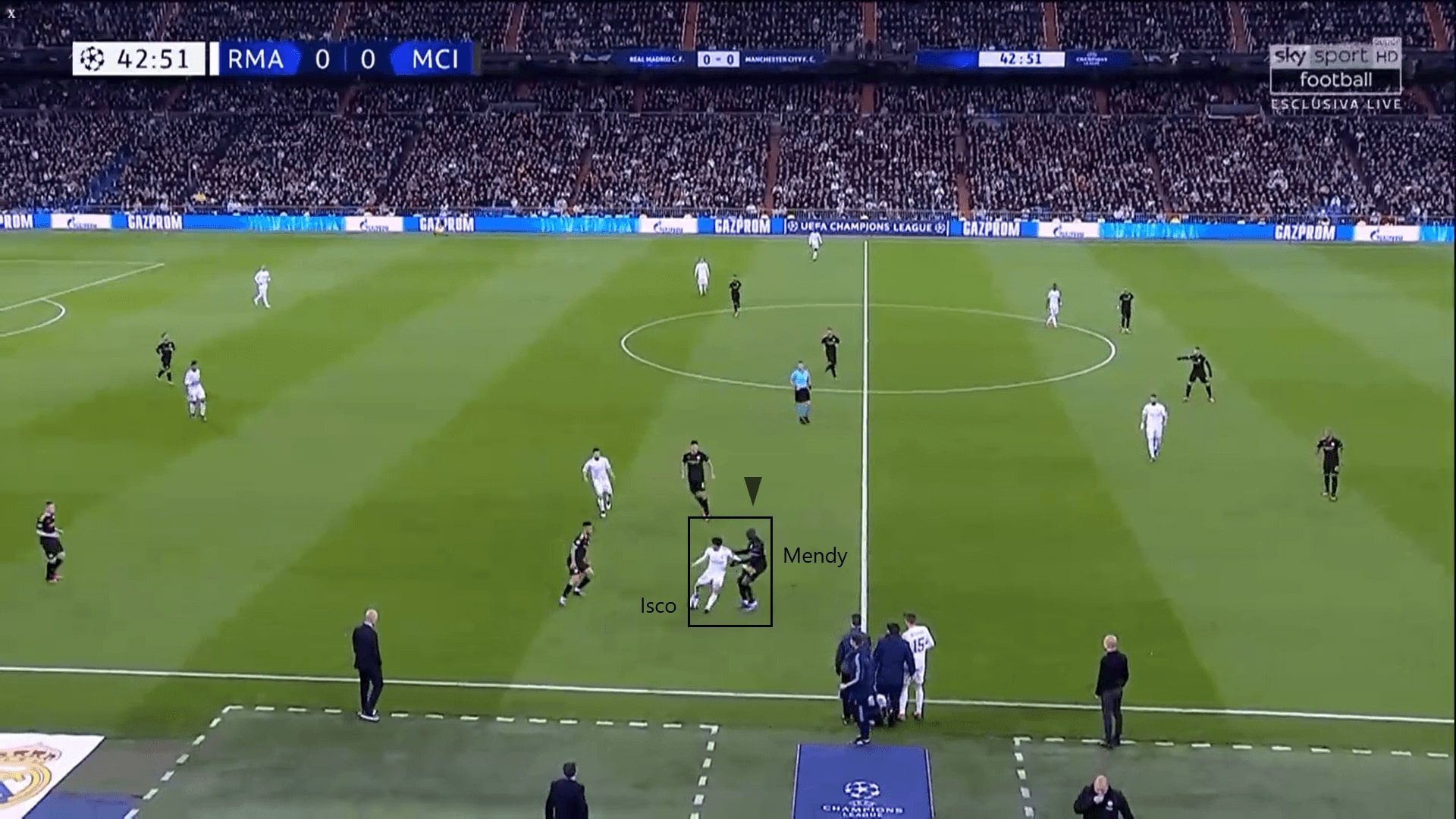 However, if Mendy arrived late and the opposition faced him 1v1, his defence was not as good as the above case. For example, he was late to approach Pereira and the Portuguese isolated Mendy. Given the suboptimal body orientation of the Frenchman, he did not have the situation under control. The Frenchman recklessly tried to kick the ball but it was in vain. Pereira drifted inside and accelerated and Mendy could not stop him. 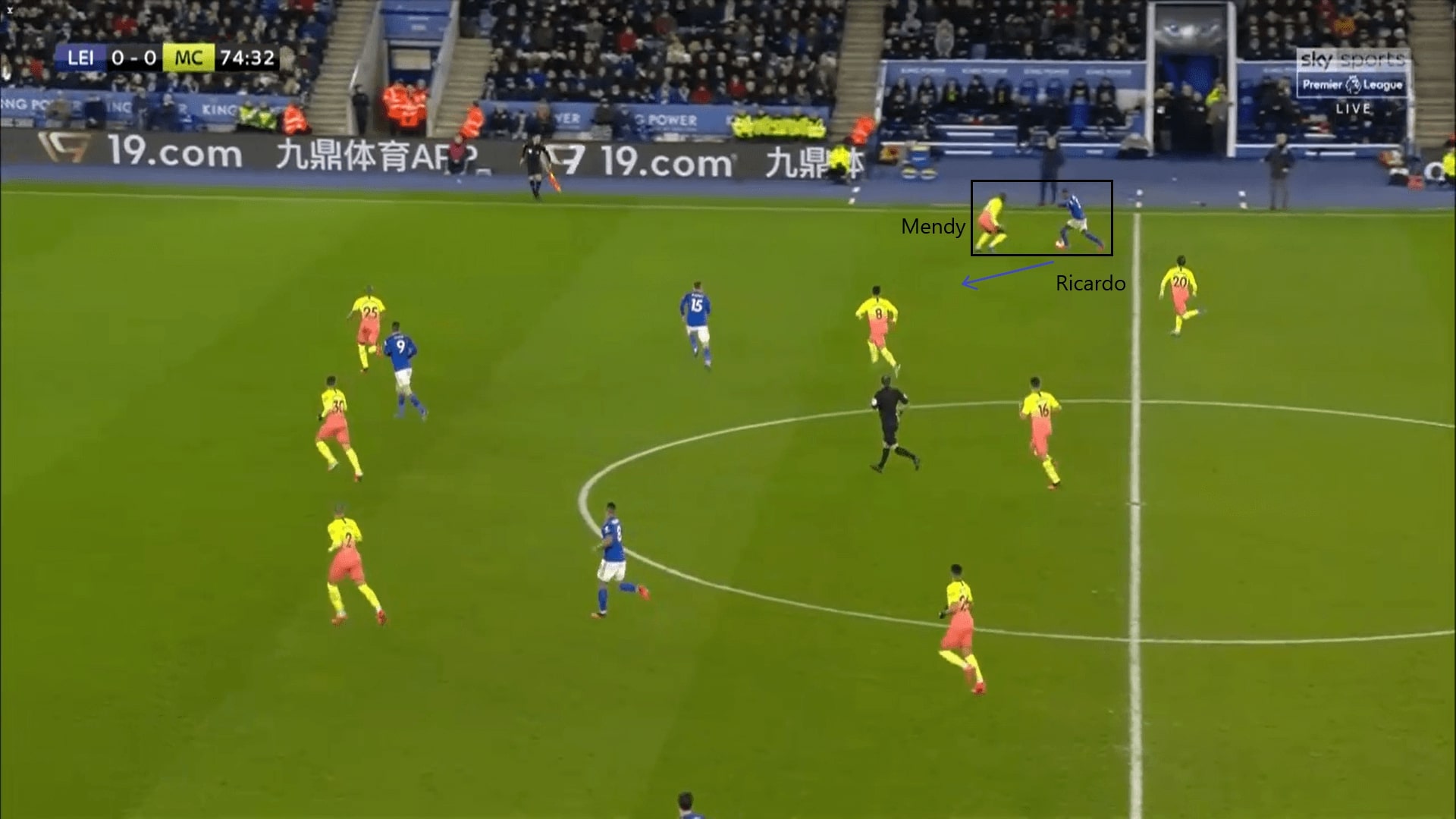 Perhaps many people neglected the good body orientation of Mendy, but he is sharp in the above attributes. Body orientation before receiving the ball is a minor detail, but vitally important as it directly affects the options and quality of the next move. Mendy does very well in terms of body orientation, and this allows the left-back to exercise his next move easily.

In this case, İlkay Gündoğan passed to Mendy, while Pereira had anticipated the pass and approached the left-back. In this case, Mendy adjusted his body shape from closed to open when the ball was travelling. Therefore, he had a wider angle to screen the pitch, play a pass, and, most importantly, see the approaching Pereira. In this case, he dribbled past Pereira in this 1 v 1 situation and progressed City’s attack. 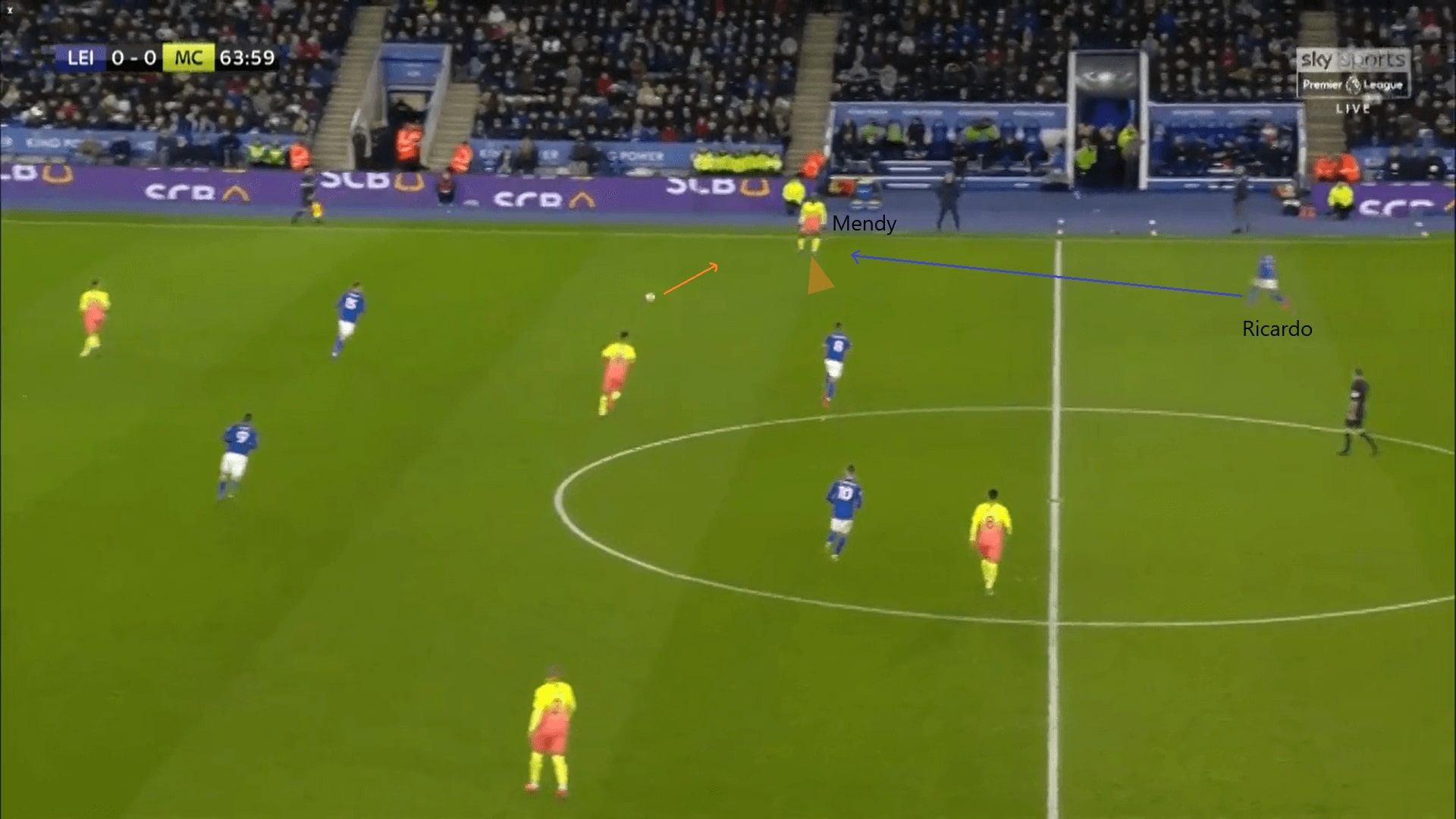 Mendy is an all-round full-back and has proved his importance to City again in this season. As Guardiola has said, with Mendy, City could attack from wide and deep, more constantly and in different ways. Mendy offers something different to his competitor, Oleksandr Zinchenko. So far, Mendy’s performance has had some flaws or errors, for example, the one you have seen at the Molineux Stadium.

However, his hard work and dedication to the team should never be neglected. The Frenchman has strictly controlled his diets and weights since his severe injuries, and has said that he would kill himself for Guardiola. This attitude of self-improvement will only help Mendy and Manchester City.