In terms of attacking talent, there are few teams in world football that can compare with Manchester City. The likes of Leroy Sane, Raheem Sterling, Sergio Aguero, Gabriel Jesus can feature anywhere across the front line whilst the mercurial pair of Kevin De Bruyne and David Silva drift in behind the front line finding space and causing havoc. In the Portuguese international Bernardo Silva, however, they have a player who is capable of filling either role in the attacking phase with no drop off in terms of quality.

When Silva joined Manchester City prior to the start of the 2017/18 season, the speed of the deal, Silva joined just days after the end of the season on the 27th May 2017, and the price, a reported £43M, surprised many. With the benefit of hindsight, we now see the club moving quickly to secure a player who would become an important part of not only the squad but also of the first-team.with Silva playing more first-team minutes in the 2017/18 season than any other outfield player for City.

So far this season, we have seen Bernardo Silva play as one of the two ‘8’s in the system used by coach Pep Guardiola as well as wide on the right of the front three, in the first game of the season, he even took up a position alongside Sergio Aguero in a 4-4-2 structure in the defensive phase.

With modern football being described as a chess match and with Guardiola being a coach who views the entire board around 5 moves ahead of everyone else, the importance of a player like Bernardo Silva is clear. Just three competitive matches into the season, Silva has already staked a claim for being one of the first names on the City team-sheet, where he then plays though, is another matter entirely.

One of the most interesting aspects of the tactical system used so far by Guardiola and Manchester City this season has been the way that they have used Bernardo Silva as something of a movable chess piece. It is a small sample size, three competitive matches, but already the Portuguese international has lined up in three different roles. 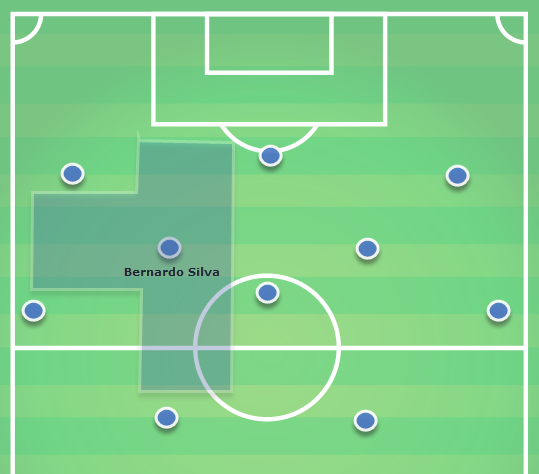 In the Community Shield match against Chelsea, the unofficial start of the English season, we saw Guardiola choose to rest both David Silva and Kevin De Bruyne, the two ‘8’s from the record-breaking season last term, with Phil Foden and Bernardo Silva filling these roles.

Silva played on the left of the central midfield, filling the role of David Silva and it says something for the quality of Bernardo Silva that there was little, if any, drop off in terms of quality between the two.

From this position, Silva would play higher on the field than the young Englishman where he would look to connect with the lone striker or drift out into the left-sided half-space where he connected with the left winger. This position is an interesting one for a player like Silva who is predominantly right-footed, although he can use both. When picking up the ball in the left side of the field, a right-footed player will naturally look to move centrally back towards his ‘strong side,’ this opens up more of the pitch that can be accessed from the first touch. 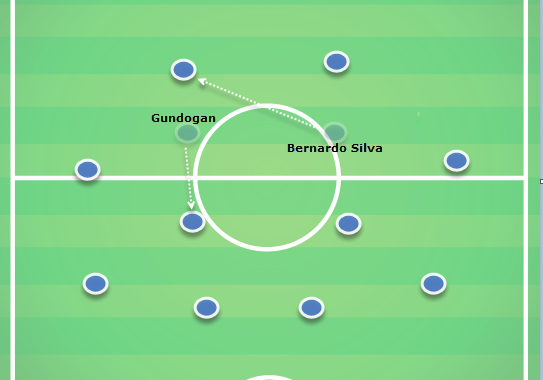 In their first match of the Premier League season, we saw another slight shift in positioning for Bernardo Silva as he moved across to play as the ‘8’ on the other side with the German international Ilkay Gundogan as the left-sided central midfielder. The most interesting aspect of this came in the defensive phase with City dropping into a 4-4-2 defensive block with the two ‘8’s rotating into different positions. Bernardo Silva moved forward to join the forward and press from the front as one of the front two. Ilkay Gundogan, on the other hand, dropped into a deeper position alongside Fernandinho as part of the chain of four across the midfield.

Once again, Silva showed his versatility. In the most recent match for City, at home to Huddersfield in a 6-1 win, we saw Bernardo Silva take up yet another position, this time wide on the right side in a 4-3-3.

Already this season, Pep Guardiola has shown his ability to continually develop the tactical system from a collective and individual standpoint. In the first match of the season, away to Arsenal in a 2-0 win, the England international Kyle Walker played at right-back. Last season with Walker at right back and Silva on the right of the attack, the full-back would move high at every opportunity, holding the width and moving the right attacker inside. This season, we have already seen Walker take up a more inverted position, against Arsenal, where he moved inside and allowed the right-sided attacker to maintain his width.

In the recent match against Huddersfield, we saw John Stones moved to an apparent right-back role but in the attacking phase, the English international defender took up a position slightly inside on the right of a chain of three defenders, with Laporte and Kompany, this movement allowed Bernardo Silva freedom and space to operate on the right side.

Whilst the positioning of Bernardo Silva is important, Guardiola is well known to demand correct positioning from his players, the movement and interplay that Silva shows in the attacking phase is the key to his fantastic early season performances. 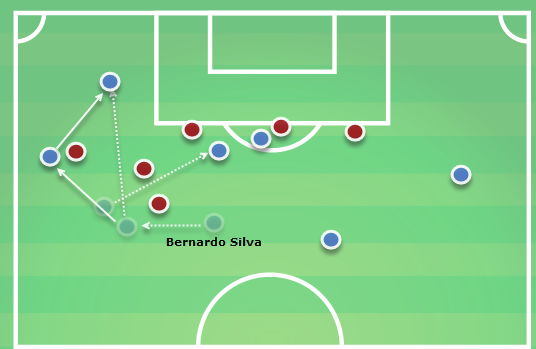 Here in the match against Arsenal, we saw Silva perform as one of the key players in creating situations in and around the final third where City would have an overload against the Arsenal defensive players. The key lies not only in the movement of Silva as an individual but in his movement as part of a collective unit, City are exceptionally difficult to play against with the use of multiple reference points (space and ball) acting as cues for them to move into different zones on the field.

Here, for example, we see a situation where Silva has possession initially centrally, as he turns to the left side, the left side attacker makes a diagonal run into space higher on the field, this movement pulls a defensive player out of position and allows Silva to move over to occupy the vacated space.

This movement creates a 2v1 on the left side with the left-back and a simple one-two allows Silva to move into space behind the defensive structure to create a goalscoring opportunity for his team. 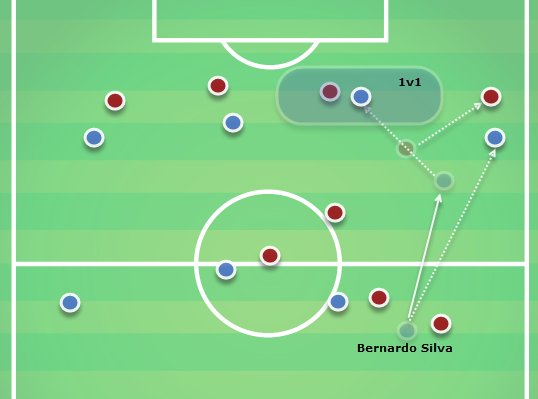 This time we see Silva working on the opposite side with his understanding of space allowing him to work in areas that cause maximum problems to the opposition defensive structure.

When Silva makes the vertical pass to the right-sided attacking player, he does not stop there or even make the ‘natural’ move centrally towards the penalty area, instead, he makes a run that is unlikely to see him take possession of the ball back, around to the outside of the winger receiving the ball.

This run forces one of the opposition defenders, the left-back, to move out to cover the run made by Silva. This, in turn, opens up space for the right-sided attacker to drive centrally into a 1v1 situation with the left-sided central defender. 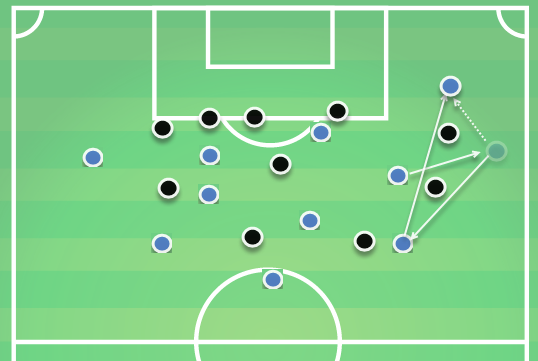 This example is taken from the match at home to Huddersfield with Silva playing as the right-sided forward in the three attackers. As the play begins, City have already developed a 3v2 situation on that side.

The entire passing combination takes just seconds to complete, further showing the speed at which City can attack your weaknesses. As Silva takes possession of the ball from David Silva, playing again as the ‘8’, he plays it back to John Stones, playing on the right of the chain of three defenders, and then immediately makes a movement high in behind the overload.

The speed of this movement speaks to the trust and belief that Silva has in John Stones in that he has the quality to play the vertical through ball to find the run of Silva. Finally, we have an example of the movement that Silva made in order to score his first, and so far only, goal of the season in the match against Arsenal. As Mendy drives for the touchline having moved high from the left-back position, we see Sergio Aguero make the typical striker’s run into the 6-yard box as he looks for a driven cross. This movement draws the Arsenal defender in as they also move in to cover this threat.

Instead of making the same vertical run from the back of the penalty area though, Silva makes a delayed run across the face of the goal into the space vacated by Aguero and the defenders.

As the ball is pulled back, instead of across goal by Mendy, we see Silva meeting it centrally for a relatively easy goal. We have heard after the match that former Arsenal player and now City coach Mikael Arteta had told Mendy just before the goal to look for that kind of cross but just as important as the instruction, was the quality of movement by Silva.

With the news that Kevin De Bruyne has already suffered a significant knee injury, it is clear that Bernardo Silva will have a significant role to play for City this coming season, with his versatility and ability to play on various formations, it is clear to see why he is one of Guardiola’s favourite players.