Sergio Aguero‘s heroics during Manchester City‘s match against Aston Villa not only played a large role in his team’s win, but it also earned him a new record. His three goals helped him overtake Alan Shearer as the player to score the most hattricks in a Premier League game. His 81st-minute strike marked his 12th Premier League hattrick.

This tactical analysis and scout report will look at why Sergio Agüero was such an asset to Pep Guardiola’s tactics. In this analysis, we will break down the characteristics of Agüero’s play and explain what made him such a threat in this match.

Agüero completed 26 of his attempted 32 passes in this match, which is much higher than his average attempted passes of 24.72 per 90 minutes. When we break this down, we can see that he was much improved in his attacking passes as well. While averaging 1.89 passes to the final third per 90 minutes, with an 80.4% accuracy throughout his career, Agüero completed all four of his final third passes successfully against Villa. He also attempted five passes into the box, despite only averaging 2.12 per 90 minutes in the past. His passes received were also much improved, receiving 29 against Villa while averaging just 19.25 passes received on average per 90 minutes in the past.

In terms of shooting, Agüero was quite clinical in this game. He managed to score three goals, despite having an xG of just 0.94. He also achieved four shots on target from his six attempts. Being ruthless with his finishing was a big reason for him achieving his hattrick, but his overall performance was much more impactful. We will look at this in the rest of this analysis.

Throughout the match, Agüero and David Silva stayed very connected. Before we look at their linkup play, we will quickly observe their offensive positioning in relation to each other. While it is, in many cases, beneficial to spread out and create space in attack, Agüero and Silva remained close.

We can see an example of the kinds of positions the pair would take up together in the images below. In the 16th minute, as Kevin De Bruyne finds himself on the ball, Silva and Agüero are both sat close together in the space between Villa’s defensive and midfield lines. 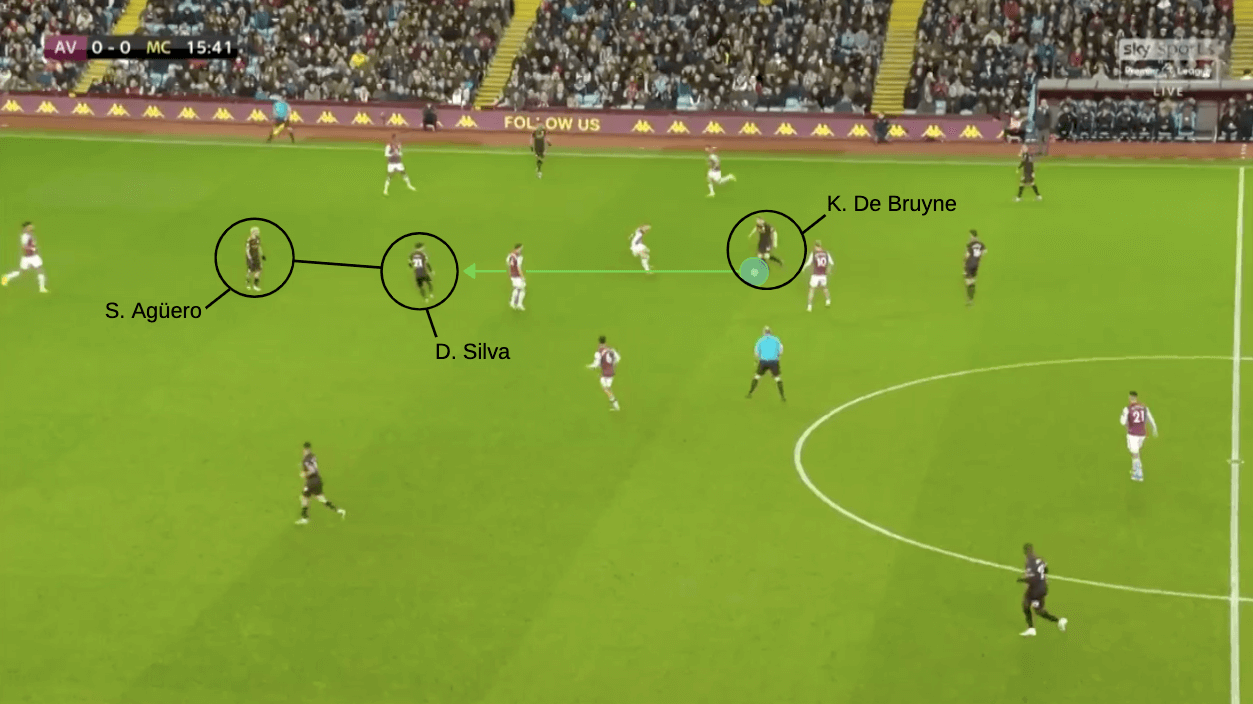 If we let this scenario play out, we can see De Bruyne play the ball through Villa’s lines where Silva picks up the ball in touching distance of his striker. This leaves Villa’s Tyrone Mings with a difficult decision. He can either step towards Silva in order to prevent a shot or cover the run of Agüero into the space behind the defensive line. Luckily for Mings, he tracks the run of Agüero and Silva plays the Argentine in. Mings was able to put the striker off well enough, preventing a serious shot on goal. 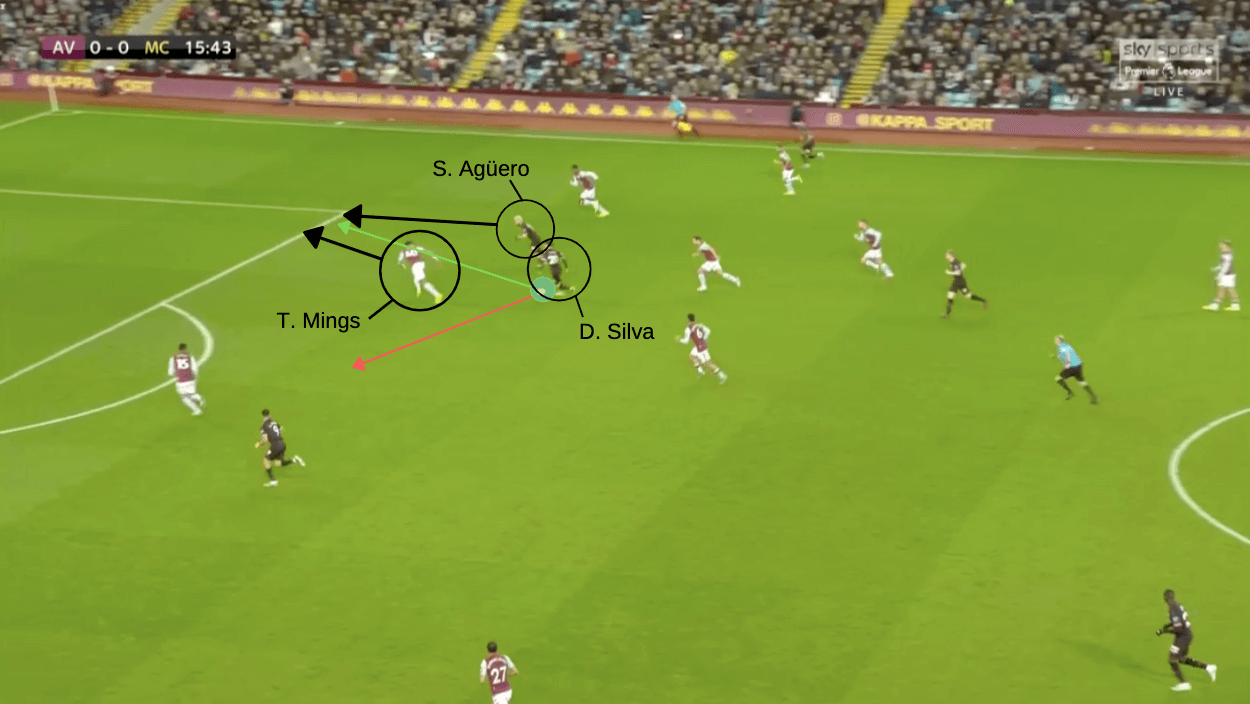 While nothing came from this chance, the pair’s positioning could have caused more damage to Villa, who were at that point still level with City. Because Agüero made the run, Mings was pulled with him, leaving ample room for Silva to drive into the box and take a shot. Had Silva chosen this option, he could have opened his team’s scoring a few minutes earlier. This is also an example of Agüero’s great off the ball movement.

The players’ close proximity to each other also helped them play off each other in possession as well. In the third minute of the match, we can see Silva and Agüero play a quick one-two that nearly results in a free shot from outside the box. As Rodri receives the ball from Benjamin Mendy, Silva and Agüero are both sitting centrally between Villa’s players. 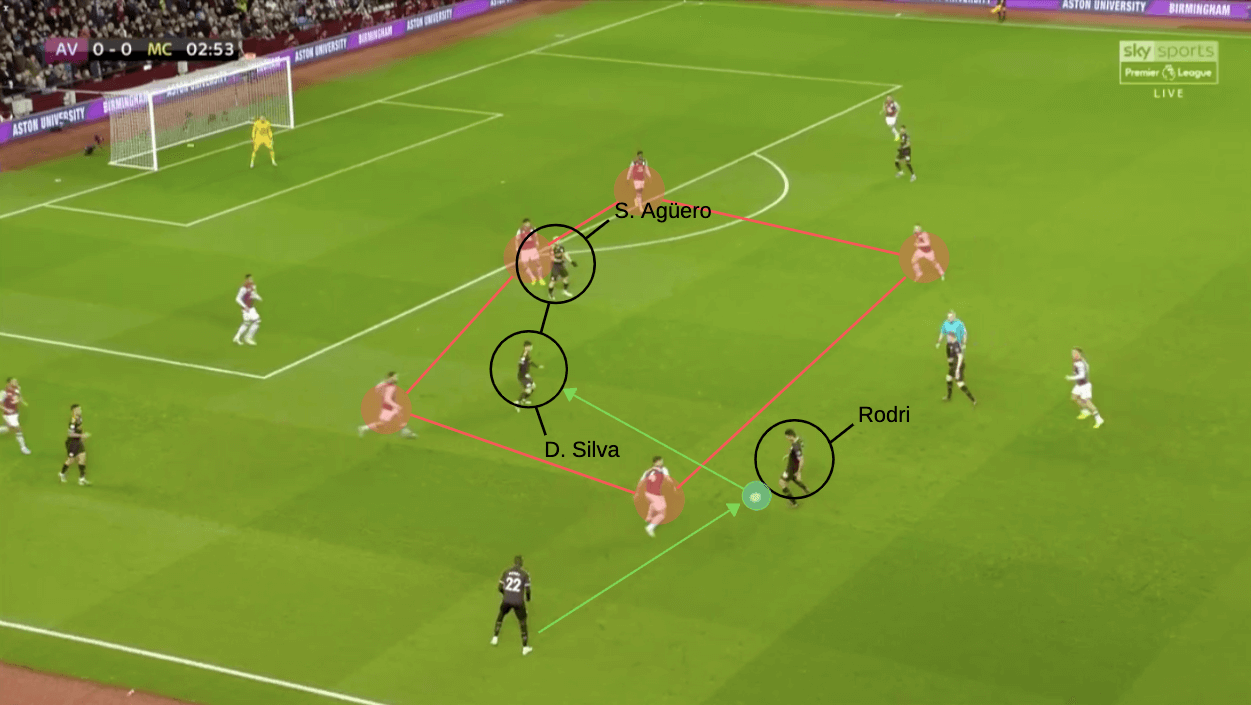 As the opposition close in on Silva, he plays a quick give-and-go with Agüero to get out of trouble. Kortney Hause does well to step to Silva after he receives the pass from Agüero, curring out the danger though. 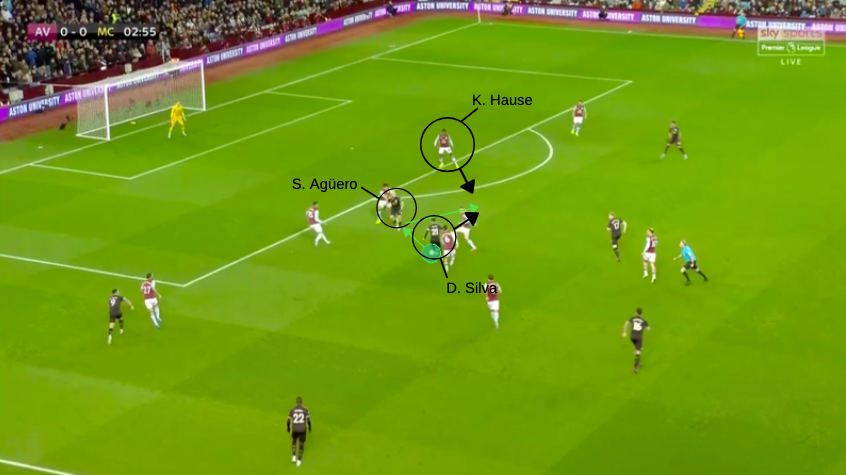 There were also examples of Agüero and Silva’s close positioning benefiting their teammates’ ability to progress the ball. In the 77th minute, Mendy plays a ball into Agüero’s feet. He then connects with Riyad Mahrez, who then is able to link up with Silva. The passes in quick succession allowed Manchester City to pass their way out of a crowded area out wide. 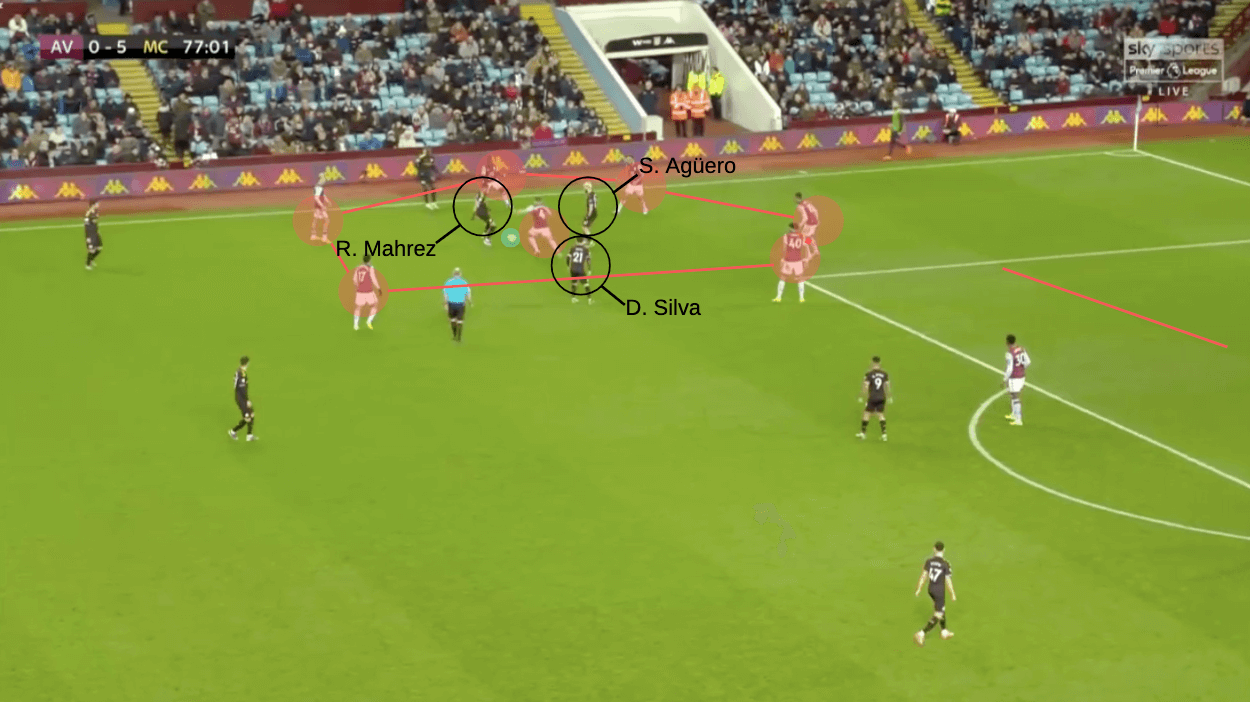 The positioning of the two players was important for Manchester City’s ability to unlock Aston Villa’s crowded final third.

If he wasn’t connecting with Silva, Agüero was dropping into the space to help link up with his teammates and progress the ball up the field. Despite playing as City’s highest player on the teamsheet, the striker often sat deeper than his other teammates. We can see an example of him dropping into the space to link up the play in the example below.

In the 20th minute, as João Cancelo picks up the ball, Agüero drops into a central position. Cancelo’s pass break’s Villa’s midfield lines and Agüero quickly lays the ball off to De Bruyne. 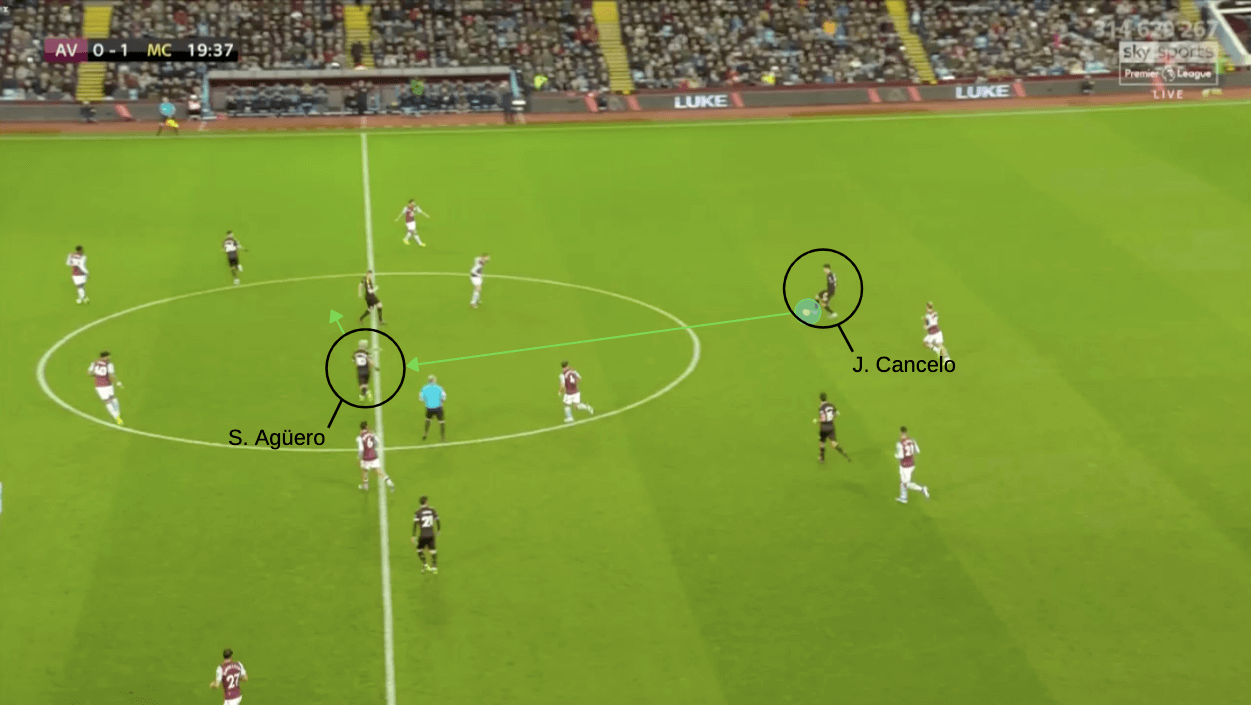 The side are then able to quickly attack the exposed Villa backline. Luckily for Villa, their back five keep their shape well and are able to track the run of Mahrez and stop the attack.

The kind of scenario directly led to Agüero’s assist as well. When Rodri played a ball to Agüero, the striker played a first-time ball out wide to Mahrez who drove at the Villa backline to open the scoring. The deep position of Agüero was critical to City’s ability to quickly bypass Villa players and progress the ball up the field effectively.

In the next example, we can see how Agüero’s positioning provided teammates with an option to play through Villa’s lines. Much like in the section above, Agüero drops into a central space. This provides Phil Foden with an option of playing a one-two and switching the play. 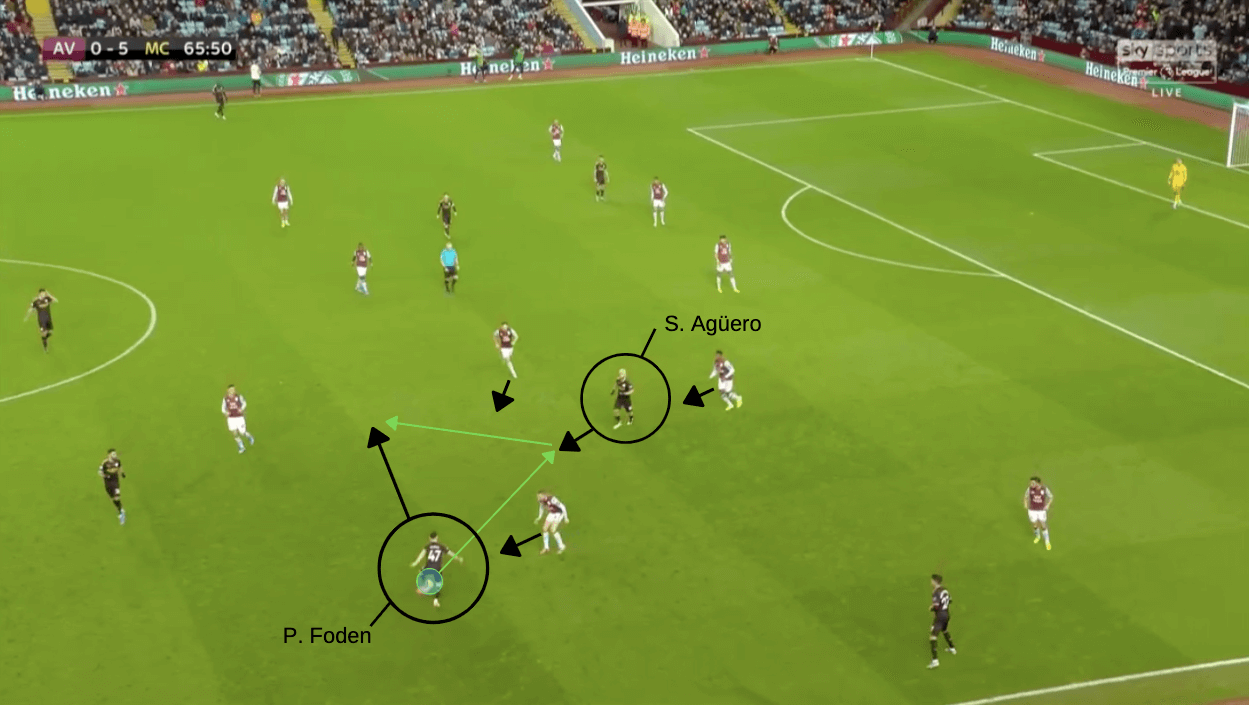 These movements into deeper positions also helped pull out Villa’s defenders. In the example above we can see Hause pulled into the midfield to mark the striker. We can also see an example of this in the 22nd minute. When Agüero receives a pass from Cancelo, four Villa players quickly step to him. 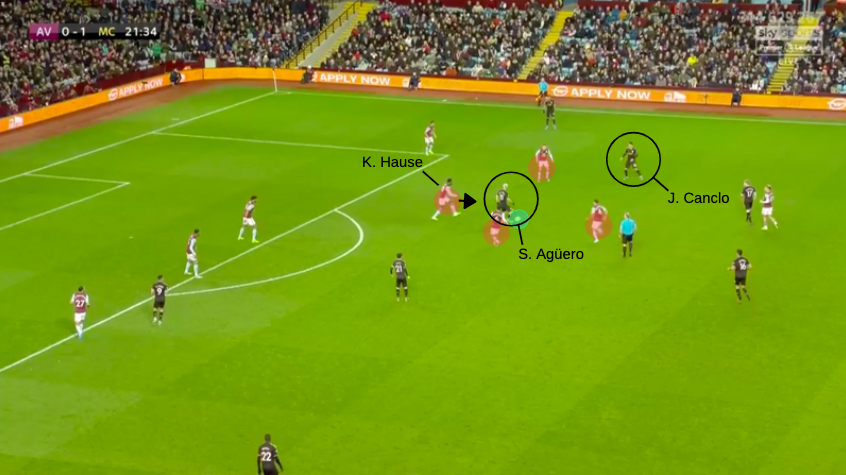 This once again pulls Hause out of his defensive back five, and creates space elsewhere on the field for his teammates.

Agüero was fantastic in this fixture. But while he played brilliantly well, he was still just a small cog in Guardiola’s system. Had he failed to play his role as well as he did, there is a good chance City wouldn’t have won as convincingly as they did. But with that being said, the game highlighted a large miss-match between Aston Villa and Manchester City’s overall squads. Manchester City didn’t need Agüero to win this game, but that didn’t stop him from playing as well as he did.