Bayer Leverkusen started the second half of the Bundesliga season with aplomb with a 4-1 victory away at bottom of the table Paderborn. It was a clinical performance from Leverkusen’s attacking unit, however, Paderborn still gave a good account of themselves, and continued to try and impose their style of football on the game throughout, even if it was with limited results. This tactical analysis will look at the tactics used by both sides, as Peter Bosz got the upper hand on Paderborn Head Coach Steffen Baumgart. 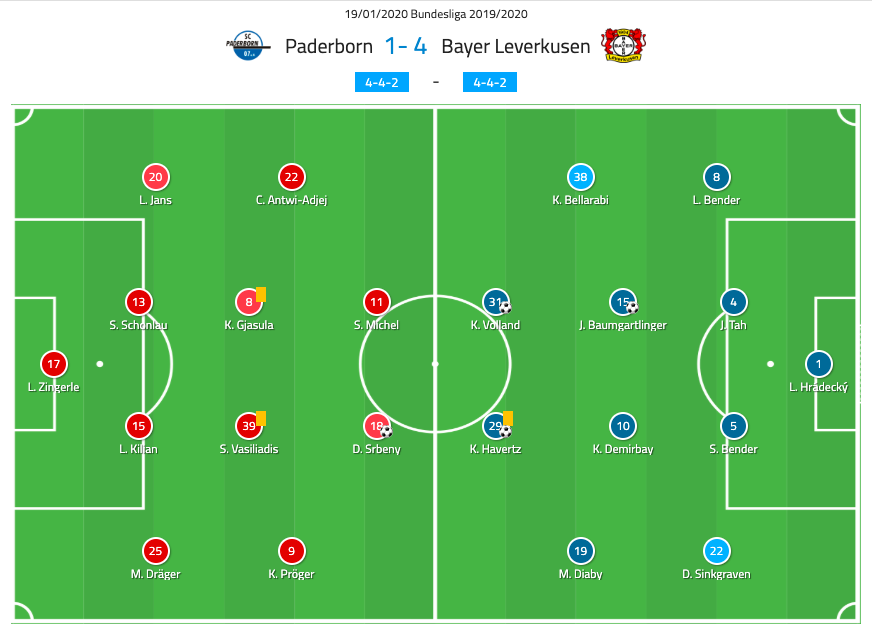 Both teams lined up in a 4-4-2. Paderborn played Sven Michel up top with Dennis Srbeny, following the latter’s recent move back to the club from Norwich City. Versatile full-back Laurent Jans was preferred at left-back with Mohamed Dräger in at right-back. Sebastian Vasiliadis was given the nod to partner Klaus Gjasula in center-midfield.

For Bayer Leverkusen, Kai Havertz partnered Kevin Volland up top, whilst Moussa Diaby and Karim Bellarabi provided the width on each flank in midfield. Daley Sinkgraven made his fifth appearance of the Bundesliga season, coming in at left-back for the suspended Wendell, who was sent off against Mainz in the last game before the Christmas break.

It was an excellent start to the second half of the season, with Leverkusen scoring three goals in the first half with no reply from Paderborn.

They were able to set the tone from the beginning of the game playing out from the back, despite Paderborn’s man-oriented press which seemed set on preventing the center-backs from being able to comfortably play out.

In order to get the ball forward but refrain from passing long, Kerem Demirbay would drop deep from center-midfield to receive, as the analysis below demonstrates. 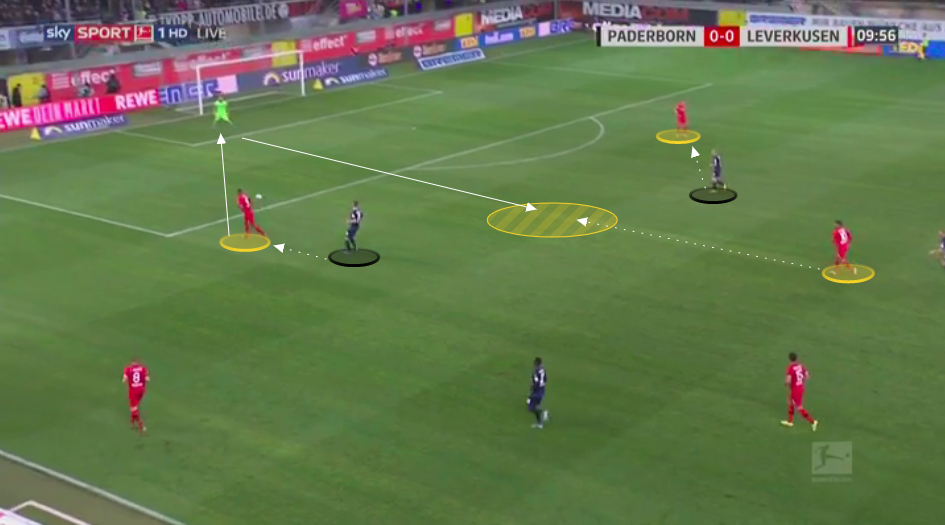 Once in possession, Demirbay could either turn out, or just play the ball laterally to one of the center-backs, and Leverkusen were able to continue having easily broken Paderborn’s first line of the press. 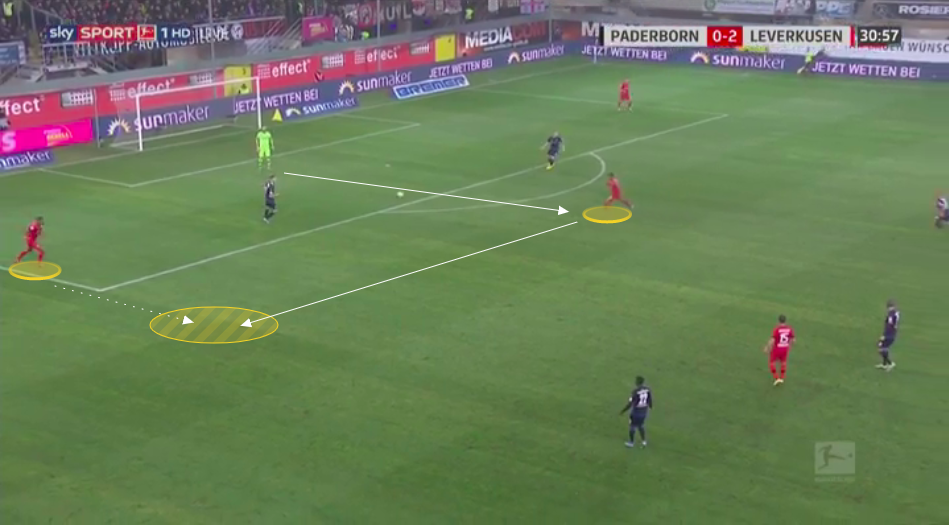 When they worked the ball forward, they were still patient, averaging 6.75 passes per possession, but frequently looked to work it wide to the pacy wingers to advance the ball quickly as ball-carriers before looking to get good service into Havertz and Volland.

Volland was particularly impressive as he frequently escaped his man to find space within the Paderborn 18-yard box, with the first of his two goals perfectly exemplifying this. As impressive as his header to open the scoring was, it was surprising to see Paderborn’s defense leave him with such space at the edge of the box, as we can see in the image below. 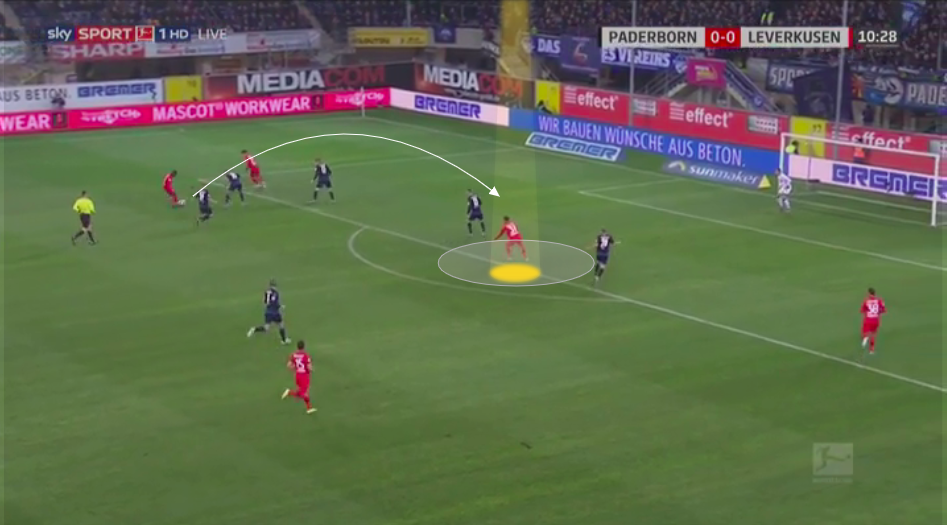 Volland was dangerous throughout, and will perhaps be disappointed not to have got a hattrick in this game.

Paderborn remained compact with a high line, which prevented Demirbay from creating much from central positions, and meant Diaby was particularly key for Leverkusen in unlocking the opposition defence.

He was a potent attacking outlet for them all game and thrived when receiving the ball in the space behind the Paderborn right-back Dräger.

Leverkusen looked to work the ball wide and play around the Paderborn defense with direct weighted passes from Sinkgraven into Diaby as we can see in the image below. 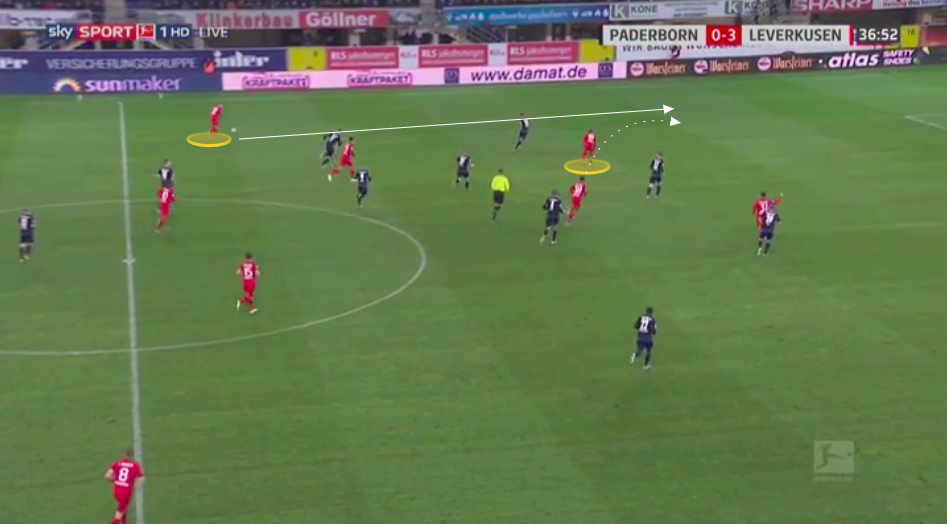 Upon recognizing this pass, Havertz and Volland were effective in quickly infiltrating the box in order to get on the end of a pass across goal once Diaby had received. 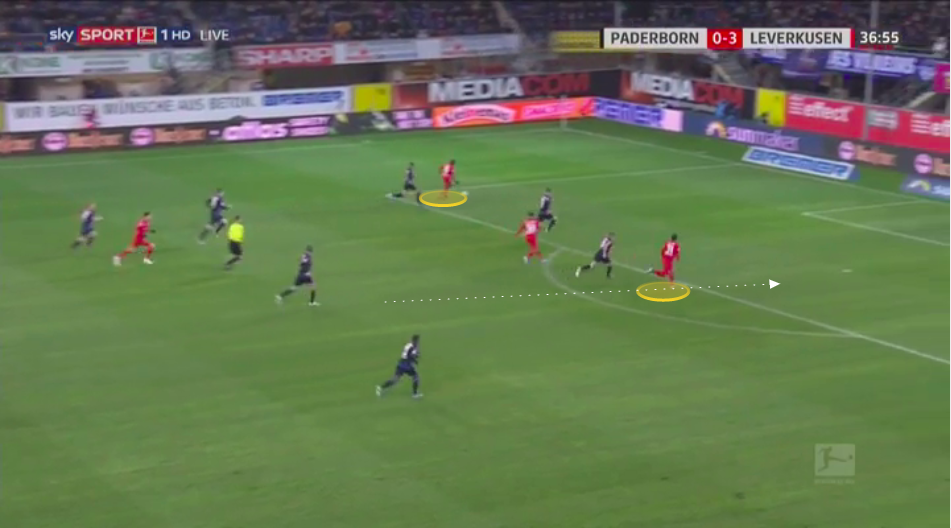 It was, in fact, this exact phase of play that led to Volland’s chance to make it 4-0 in the first half, along with the opportunity for a hattrick, but despite being in the perfect position to tap home, he had a lapse in concentration and failed to latch onto the ball.

Diaby’s pace was effective in helping Leverkusen put the game to bed as Paderborn pushed forward in the second half to build upon their solitary goal and continue closing the gap on the away team’s lead. By remaining high as Paderborn pushed forward, Leverkusen were able to quickly counter with a simple ball played forward to Diaby who started well within his own half to allow himself as much space as possible to beat his marker one-on-one in a footrace. 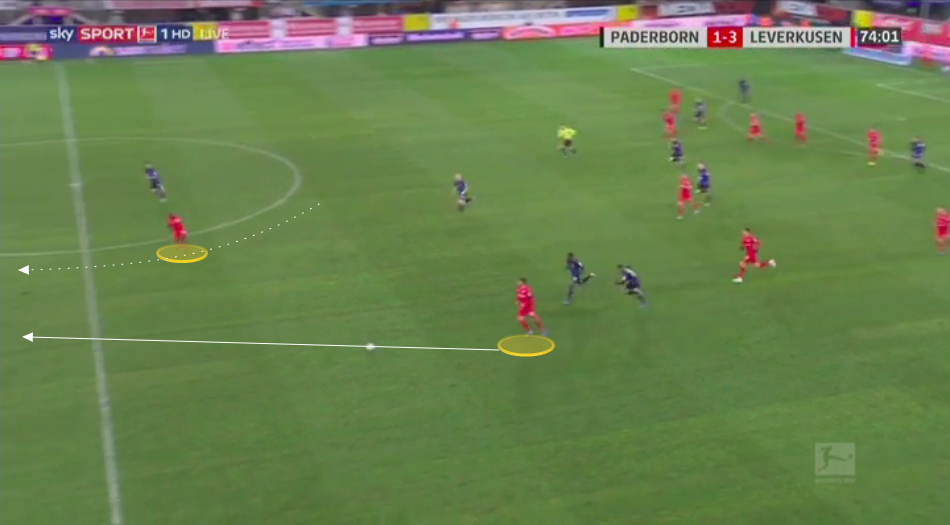 Leverkusen are blessed with pace to burn in wide areas and Diaby, in particular, is so useful for bringing the ball forward quickly.

Frankly, he should have got three in the first half, and the chance he squandered summed up how dangerous Leverkusen can be in transition, as they play forward so swiftly.

Bayer Leverkusen’s second goal came from a well-worked set-piece that successfully allowed the away team to get attacking players in dangerous positions to receive a cross within six-yards of the goal, without being closely marked. I was particularly impressed with this routine for it created a goal-scoring opportunity from a difficult central position that was perhaps just a touch too far for the direct free-kick to be a worthwhile option.

Instead, Demiraby stood over the ball whilst his teammates spread out into two pockets either side of the defensive wall. The pocket of three players to the left of Demirbay sat deeper than the other pocket of players, with the player highlighted at the back of this group, Havertz, was the real target for this pass, whilst the other two were merely there as a distraction, and would not make a run into the space highlighted. In the other cluster, the player closest to the goal was also a decoy, and would actually move away from goal, acting as a blocker, whilst the other three attacking players in this cluster ran towards goal, spreading across the six-yard line. 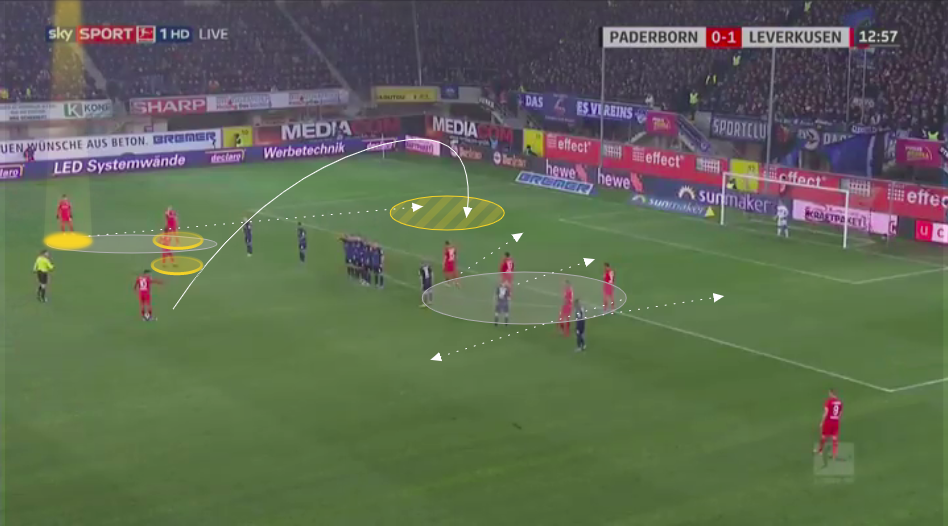 The cue for Demirbay to play the ball was Havertz sprinting into space, and as he did this Demirbay played a beautifully lofted pass over the wall. Havertz was then able to play the ball across goal where Volland could score his second of the game, without any significant pressure from his marker. 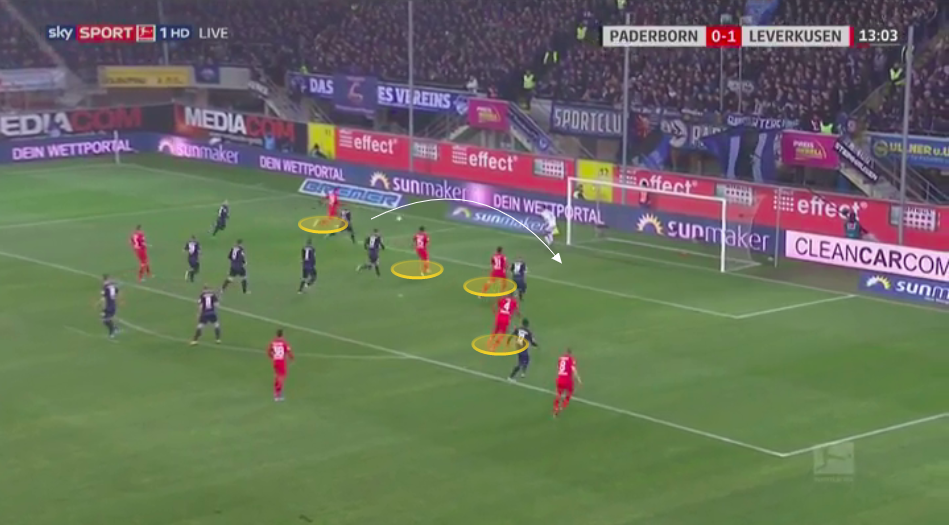 Did Paderborn’s performance deserve this scoreline?

With Leverkusen’s elite finishing in the final third, it would be a little outlandish to argue Paderborn deserved something out of this game, however, the xG for the game suggests they were a little unlucky to lose by such a margin. Their xG of 1.56 is only just behind Leverkusen who had an xG of 1.78.

Paderborn continued to play the direct and positive football we have seen from them this season, averaging 3.67 passes per possession, almost half of what their opponents averaged, from their 36% possession.

However, they looked to play out from the back, with both center-backs splitting wide and deep to receive from Leopold Zingerle. They looked to get the ball into the flanks and hit direct passes behind the opposition into the half-spaces for their two forwards to run onto. This was something they looked for throughout the game, with long passes comprising 14% of their total passes.

Leverkusen were wise to this, however, and so Paderborn would play inside first to ensure they could work the ball wide, should Leverkusen close off those passing lanes. 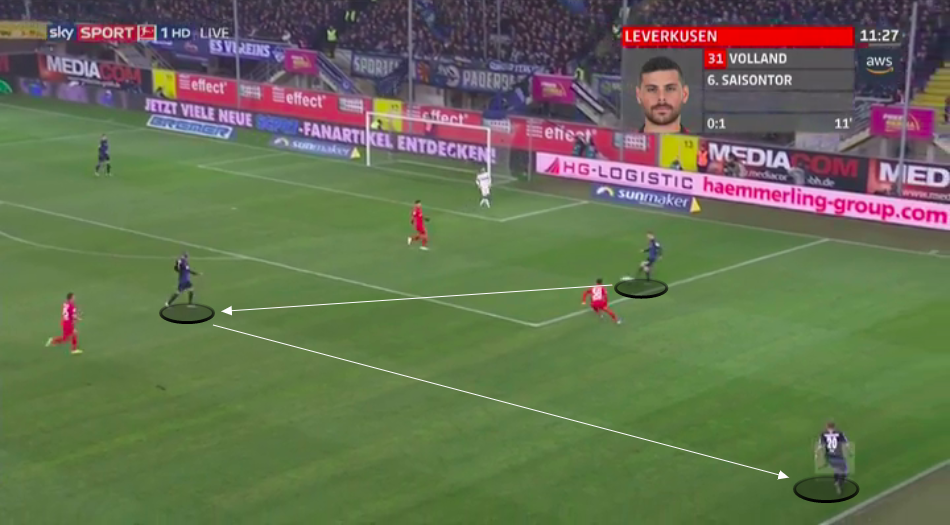 Baumgart has instilled confidence in them playing out from the back, regardless of their struggles for results in the league, and even deep into the second half Dräger exemplified this confidence by faking the pass to the winger in front of him, instead choosing to cut inside, take out two Leverkusen defenders, and ensure he had an extra passing option in front of him, whilst having space to play forward, as the analysis below shows. 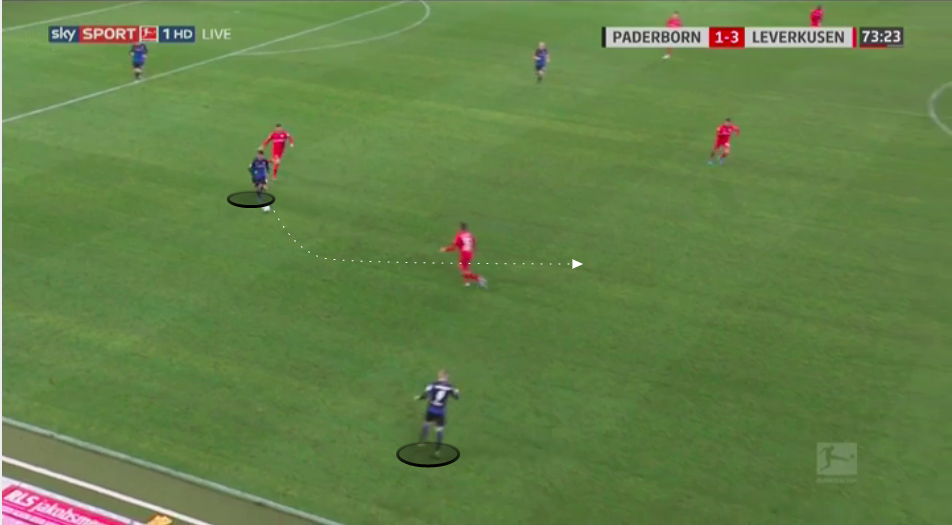 Paderborn looked to use the pace of their front men to get behind Leverkusen’s defense with direct passes and again this example demonstrates this with second-half substitute Streli Mamba looking to get played in behind. By taking away the Leverkusen central defenders with his run it also opened up space for his strike partner Michel, highlighted in blue, to move into support and look for the cross. 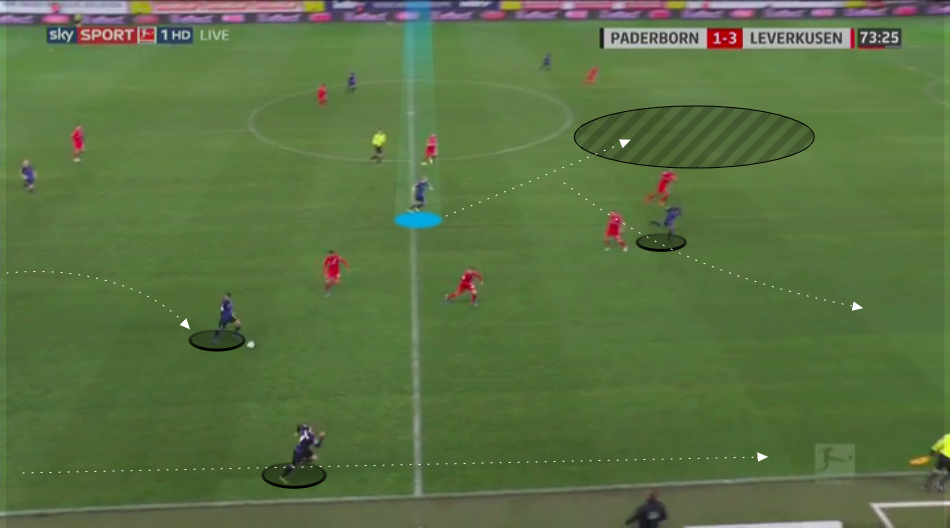 Paderborn showed composure around the edge of the area too and Baumgart clearly wanted the front two to play on the toes of the defense when they were in advanced areas. By working the ball quickly from wide areas into the middle they were able to isolate the defenders against their front two, whilst leaving the wide man open. Below Gjasula has pushed forward to occupy Sinkgraven, allowing Kai Pröger space on the outside. 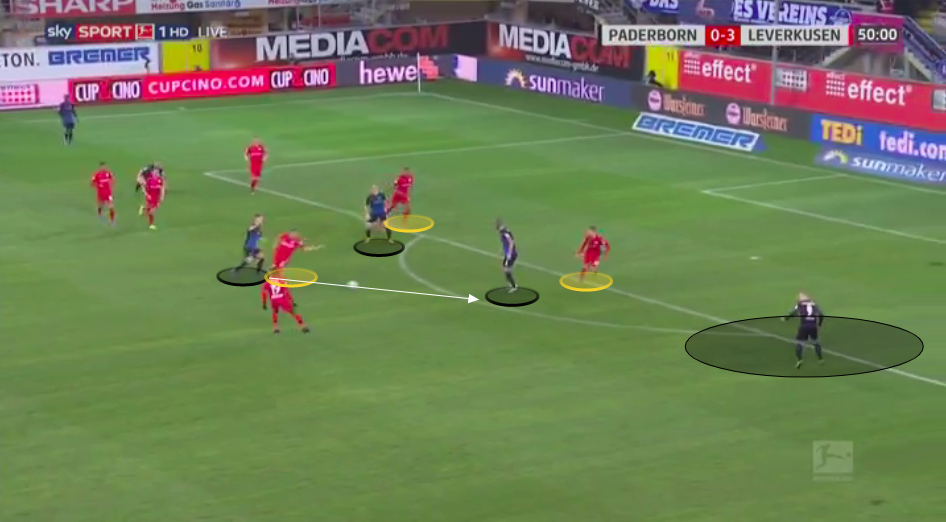 In this particular case, Gjasula was allowed space to turn as Sinkgraven had to drop off aware that Pröger was open on his outside. This space meant Gjasula was able to get a shot away on goal, which led to Srbeny scoring from the rebound after Lukáš Hrádecký parried into his path.

Paderborn played some good football over the course of the game, and although didn’t do enough to win, the 4-1 scoreline could arguably be seen as a little harsh on the hosts. 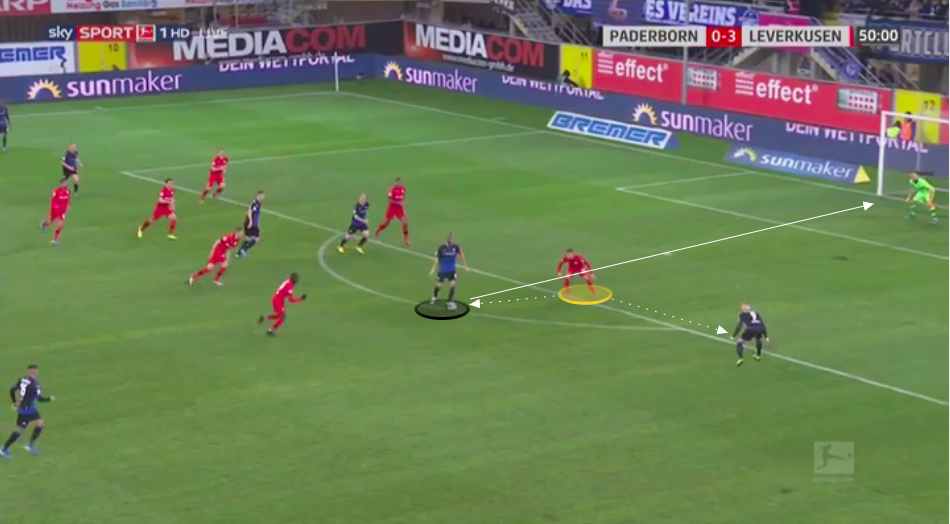 Bayer Leverkusen have aspirations of a top-four finish once again this season and games like this against struggling sides are obviously ones they cannot afford to slip up on. They certainly had no such problems, and Leverkusen fans will have been pleased to see Volland looking sharp and potent following the winter break.

With this game marking Paderborn’s twelfth league loss this season, survival is beginning to look less and less likely. Yet despite a difficult game, there were positive signs from the home side, who it appears will continue to play their own style of football on their own terms, regardless of their league positioning.