In the end, Zidane’s corrections gave his team a better opportunity to win, creating more shots from better positions. Casemiro’s second-half brace secured a 2-1 win for Los Merengues in the 20th round of La Liga play.

In this tactical analysis, we’ll look at Real Madrid’s high press and the role of Casemiro, especially his play in the second half. An analysis of Lopetegui’s will show that, although Sevilla defended well, its attacking tactics were subpar, relying far too heavily on crosses while bypassing opportunities to attack from more central locations. 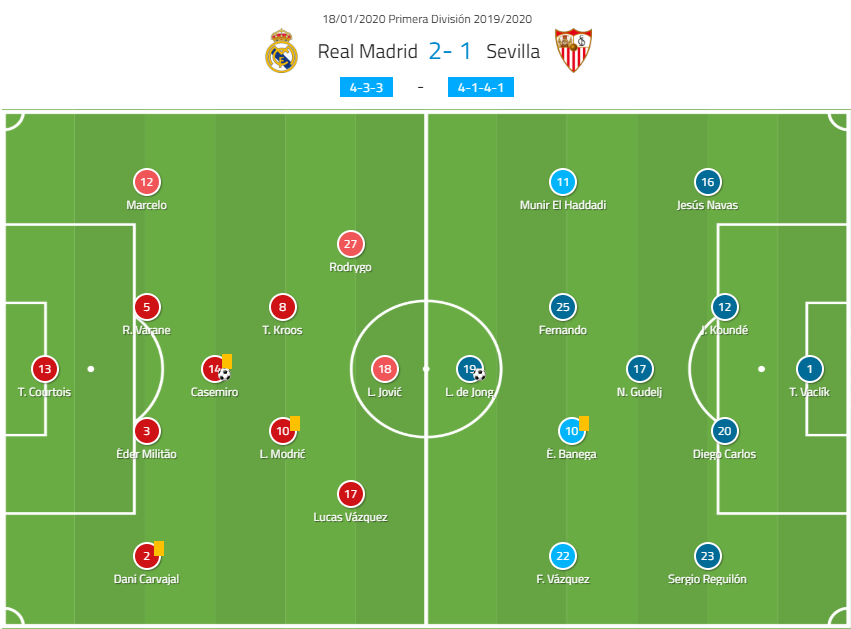 Zidane went with his preferred 1-4-3-3, starting Thibaut Courtois in goal with Dani Carvajal, Éder Militão, Rafael Varane and Marcelo along the backline. His midfield trio consisted of Casemiro, Luka Modrić and Toni Kroos. Rounding out the formation were Lucas Vázquez, Rodrygo and Luka Jović.

Up against his former club, Lopetegui started with a 1-4-1-4-1 before moving to a 1-3-5-2 for the final 15 minutes. Tomás Vaclik got the nod in goal as Jesús Navas, Jules Koundé, Diego Carlos and Sergio Reguilón made up the backline. Nemanja Gudelj started at the pivot with Éver Banega and Fernando just in front of him. Munir El Haddadi and Franco Vázquez started out wide with Luuk de Jong as the lone forward.

As this game started, it was clear that both intended to press high and intensely. If you’ve analysed Madrid’s pressing tactics, you’ll know that the front players are responsible for counter-pressing the opposition, forcing them backwards until the whole team is ready to engage. As the midfield and defenders set up to man-mark their opponent out of the play, the forwards funnel play to the deepest defender, forcing the player to either play a risky pass to the goalie or send a hopeful ball forward.

With 43% of the game played in the middle third and another 33% in the attacking third, Real Madrid benefited from a typically strong starting position. When Los Blancos lost the ball, they averaged a phenomenal 7.5 PPDA (passes per defensive action), showing the quality of its transitional play and defensive tactics. The initial pressure on the ball prevented Sevilla players from picking up their heads and sending line-breaking passes. If the high press didn’t work, Sevilla dropped into a 1-4-1-4-1 middle block, then progressed to a low block with everyone behind the ball. The lack of high outlets and compact nature of Sevilla’s transitional shape gave Madrid players enough time to press and recover its defensive shape. In this match, Madrid managed to hold Sevilla to a 69% success rate in progressive passes and 50% of long passes. 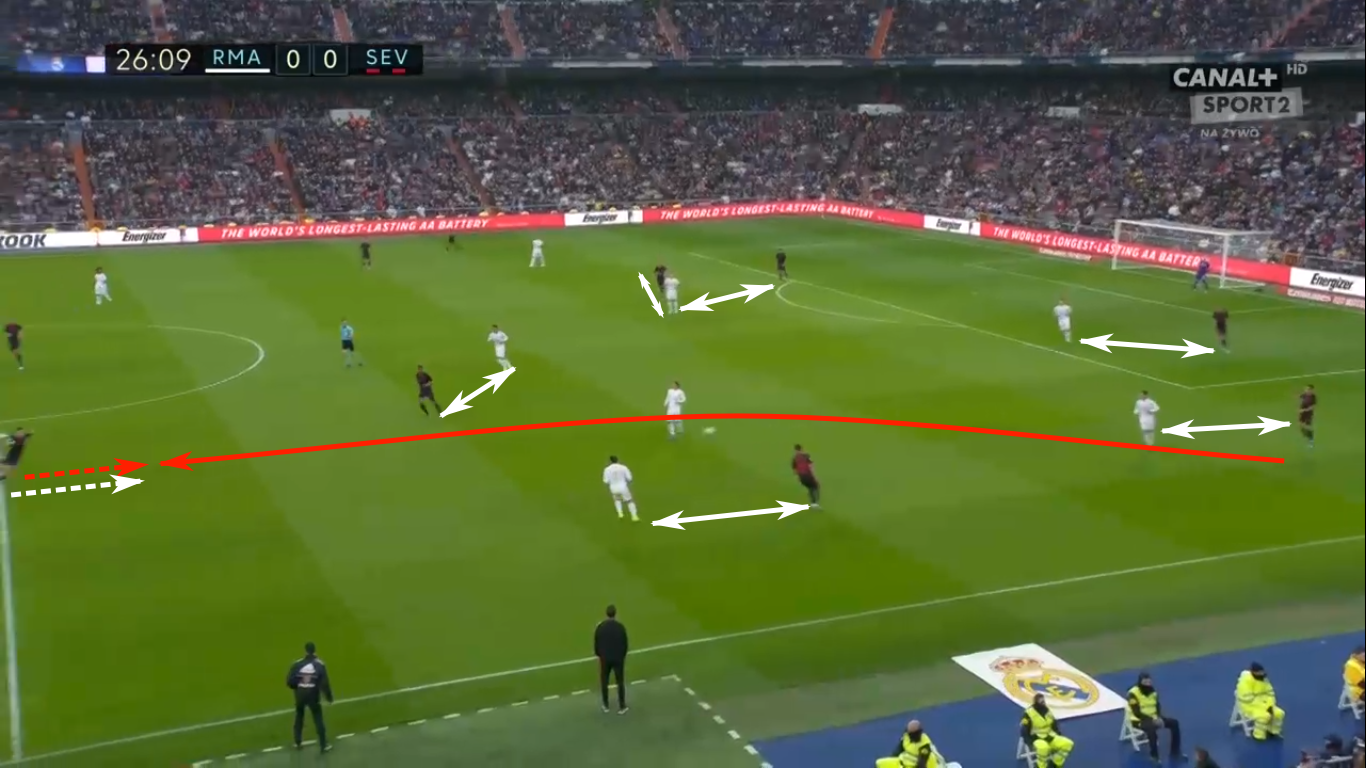 In this scenario, we get a clear image of the Madridista’s well-executed high press. Reguilón received the ball deep in Sevilla’s left-wing. As you can see from the still image, he has nowhere to go but forward. As Sevilla was making the field more expansive to initiate the attacking phase, Real Madrid was quickly closing all short and intermediate outlets forcing Reguilón to play long. 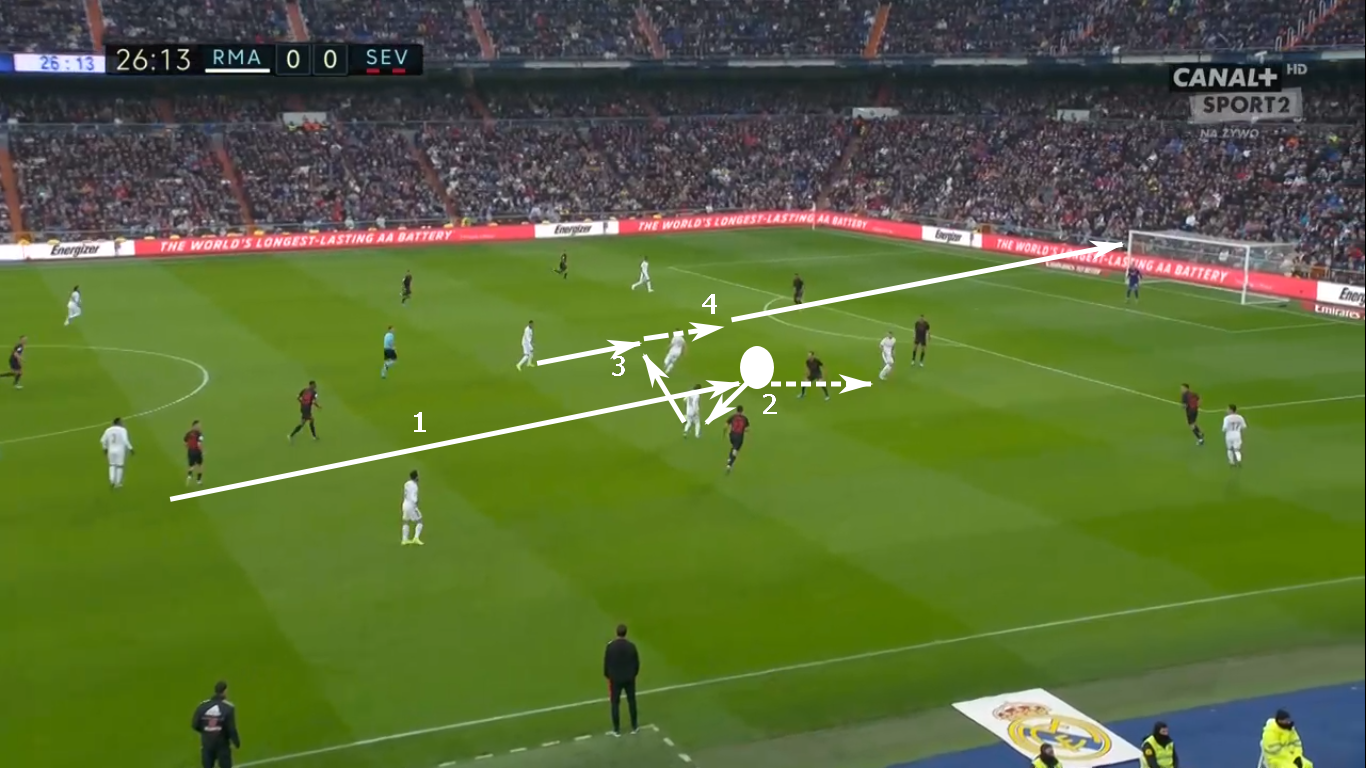 Militão was first to the ball and poked it up the field. A quick sequence saw Kroos set for Modrić, who played Casemiro into space. The pivot’s shot flew wide of the mark on this occasion, but his hour was near.

Sevilla’s attack stalled in the attacking half

As effectively as Real Madrid pressed, Lopetegui likely entered the game knowing his side would have to convert on the few chances they would get. For a side that had just 45% possession, the guests had a rather high 85% passing accuracy. Looking beyond the surface, the types of passes Sevilla played tell the story of its tactics. Of the Andalusian’s 478 passes, 186 were lateral and 81 were back passes, accounting for 56% of the team’s passes. Turning to the more aggressive, direct passes, Sevilla managed to go 5/3 in through passes (60%), 5/2 in smart passes (40%), 16/6 crossing the ball (38%) and completing only one key pass. Whereas Madrid completed 13/12 deep completions (92%), the visitors only attempted one, which was completed.

One tactical trend that was far too prevalent was Sevilla’s reluctance to play riskier passes. At times, you could have marked off the middle with caution tape and I don’t think Sevilla would have minded. It was too reliant on wing play and crosses, preferring the low reward, yet easier, higher percentage passes while often neglecting to check if the high-reward pass was available. Little central penetration and too few runs in behind the Madrid defence meant the home side comfortably stacked the middle to defend crosses, all while maintaining the high positional starting point of its outlets. 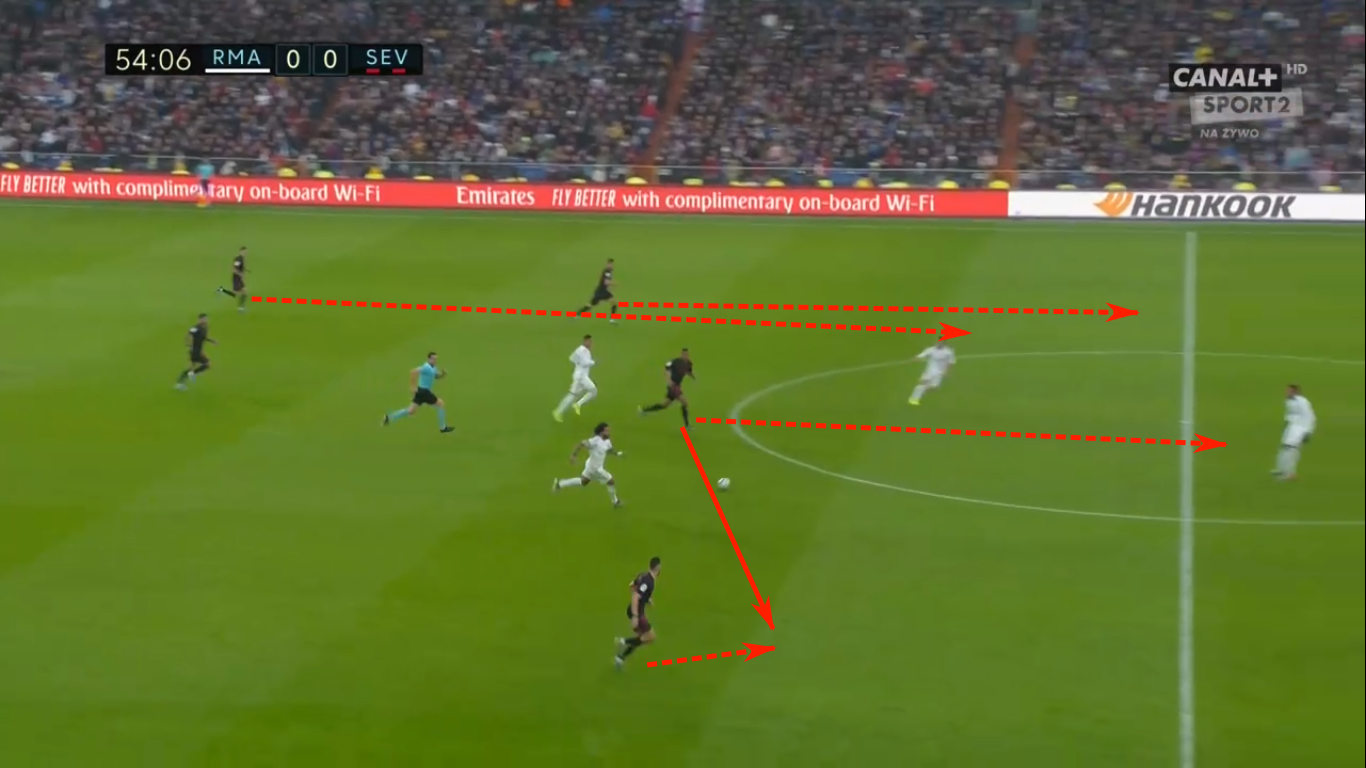 After a recovery near the Sevilla box, Fernando burst forward on the dribble, poked the ball past Casemiro and played to El Haddadi. The pass was both soft and behind the run of the former-Barcelona youngest, so he decided to cut back and access his options. 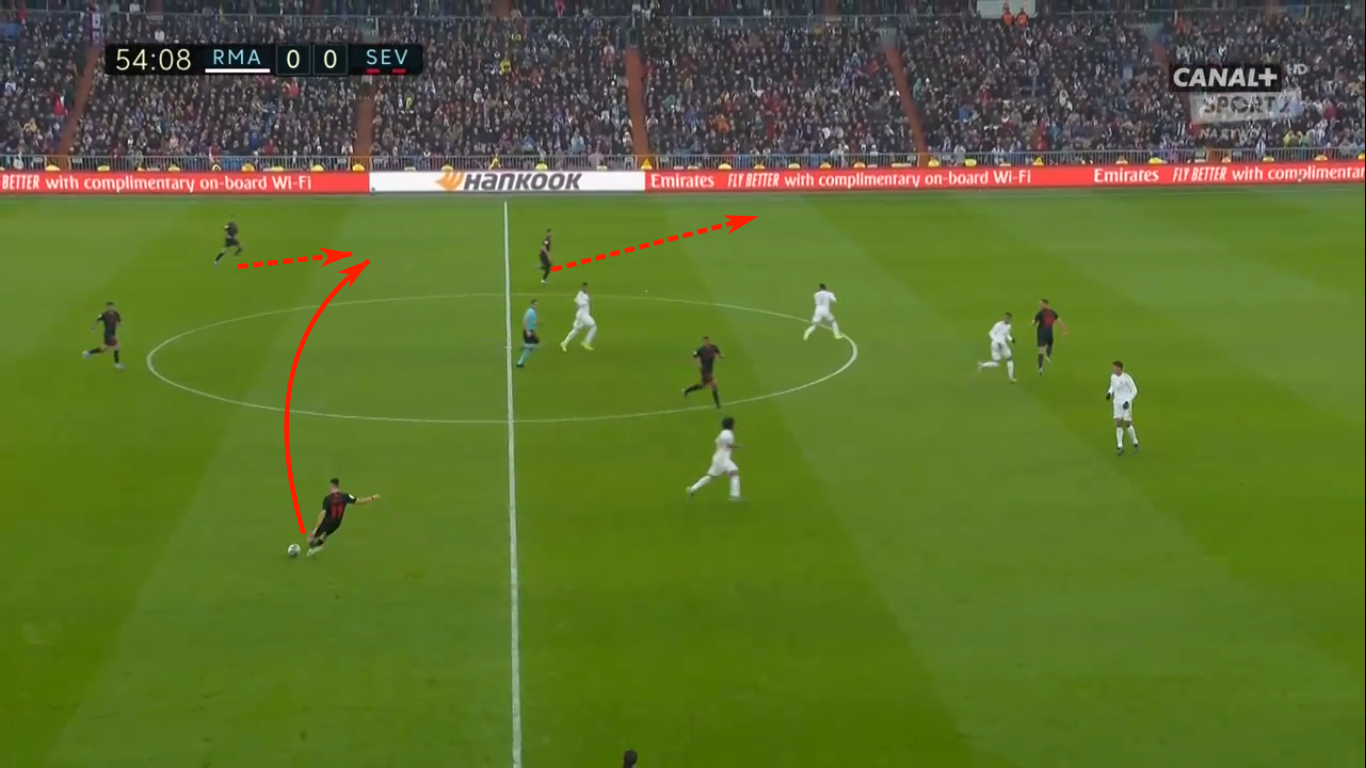 After taking a moment to make his decision, El Haddadi decided to switch the point of attack. He spotted the run of Reguilón, playing the trailing runner rather than the more aggressive pass to Vázquez. Despite the long, lateral switch of play, Sevilla remained numbers up at this point. Notice Marcelo’s recovery run. Though Varane is ready to step forward to cover his teammate, Marcelo’s recovery run with his back to the ball reveals the time and space El Haddadi had to carry the ball forward, but he decided not to force a response from the defence. 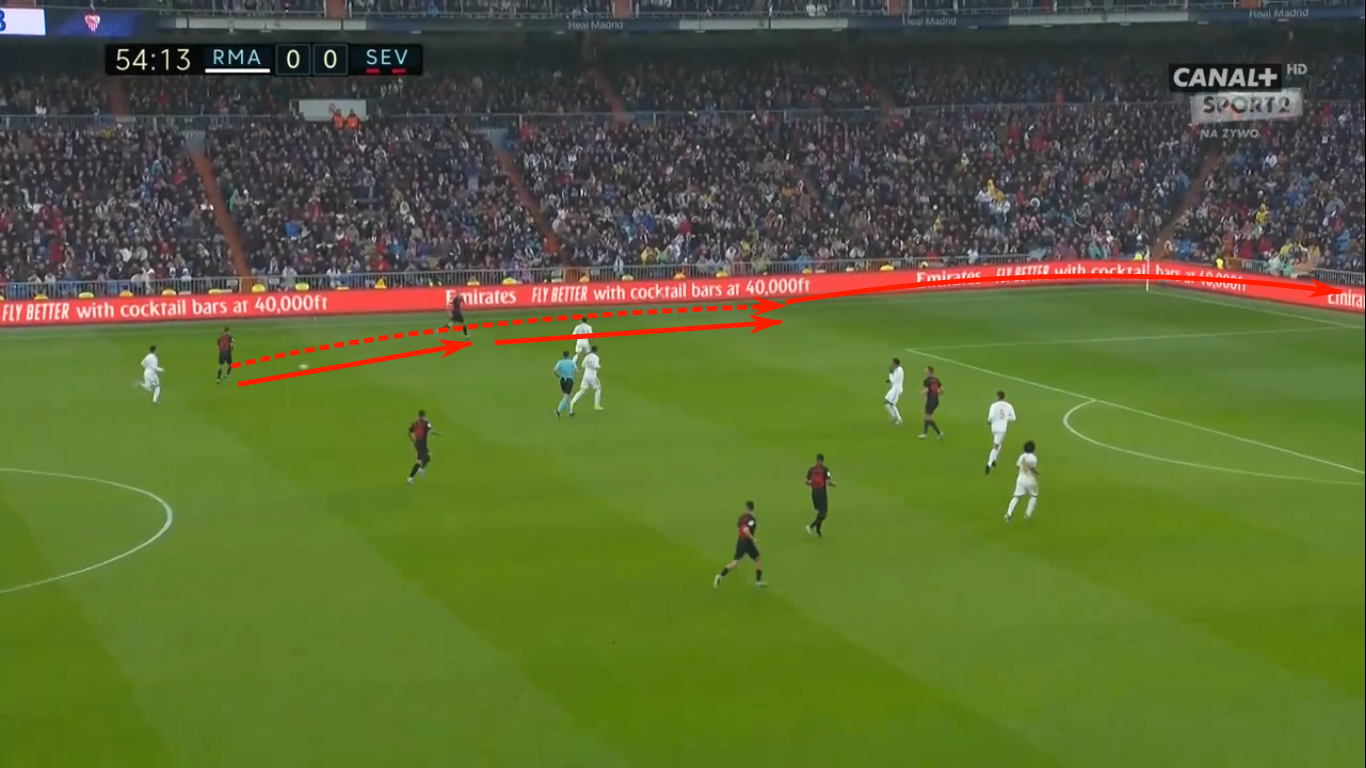 Still a man up in the attack, Sevilla’s dillydallying leads to a slow pass from Reguilón to Vázquez. The Madrid loanee casually overlapped his teammate and eventually sent a cross that Real easily defended. Note that Sevilla is 2v2 out wide with a recovering defender sliding advantage in Madrid’s favour. In the central channel, Sevilla had a 4v3 scenario with an easy outlet. 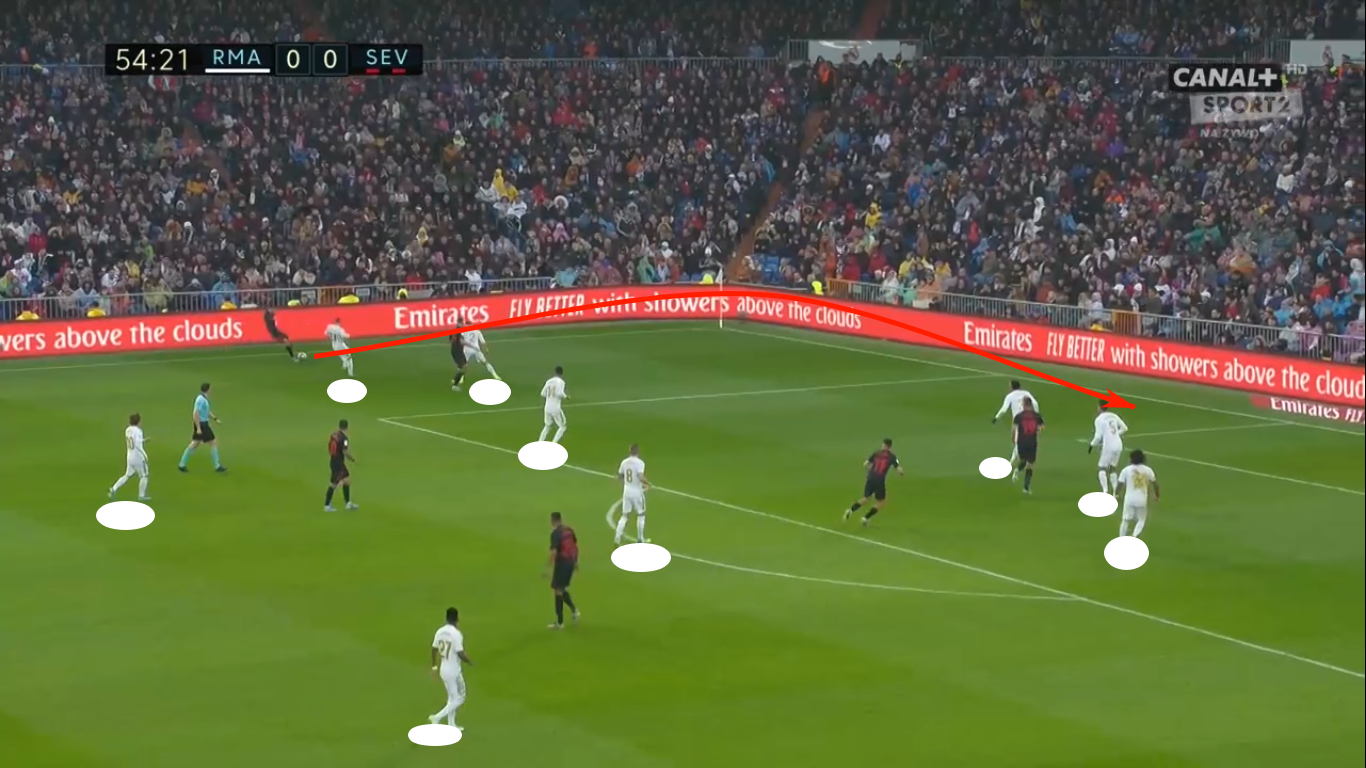 By the time Reguilón sent his cross, the home side was able to get 10 players in or near the box, outnumbering Sevilla by four. The Andalusians had a few counterattacking opportunities similar to this one, but the instinct was to move the ball wide and send a cross. Though Lopetegui’s sides are well-known for their wing-play, poor decision making and dependence on the cross stifled the effectiveness of Sevilla’s attacks.

Casemiro’s role through the phases of attack

In the end, it was Casemiro’s heroics that secured the win for Los Blancos. The difficulty of tracking his runs from deep was one of the few defensive difficulties the visitors experienced. Since Casemiro is a defensive midfielder, it’s worth an analysis of how Zidane uses his 6. Typically, the pivot player operates in close proximity to the centre-backs, but Casemiro’s as likely to collect the ball high in the half-space as he is near his centre-backs. Though his starting point is determined by the phase of the game and position of the ball, there are a few tactical pointers worth exploring.

As Real Madrid look to build out of the back, Casemiro will generally start just in front of the two centre-backs as Ramos, Varane and Militão are all comfortable on the ball. If the opponents apply high pressure, Casemiro is likely to drop between his central defenders. Suppose Madrid progress to the middle third and the opponent is sitting in a middle block. In this instance, the other two midfielders while drop deep to receive and look to play over the opposition’s lines. In the meantime, much like in this match, Casemiro will drift higher up the pitch, typically either centrally or offset to the right.

These subtle movements mean the team is prepared to attack the opposition. Against Sevilla, Kroos and Modrić dropped deep, pulling the opposing midfielders higher up the field. That allowed Casemiro to receive in the gap created by the advanced pressing of the midfield. If the line breaking pass goes to Casemiro, he’ll look to pin an opponent before distributing. If the ball is played wide, Casemiro is free to make a run into the box, which is incredibly difficult to track given the depth of his starting point. His successful runs into the box produced the two Madrid goals. 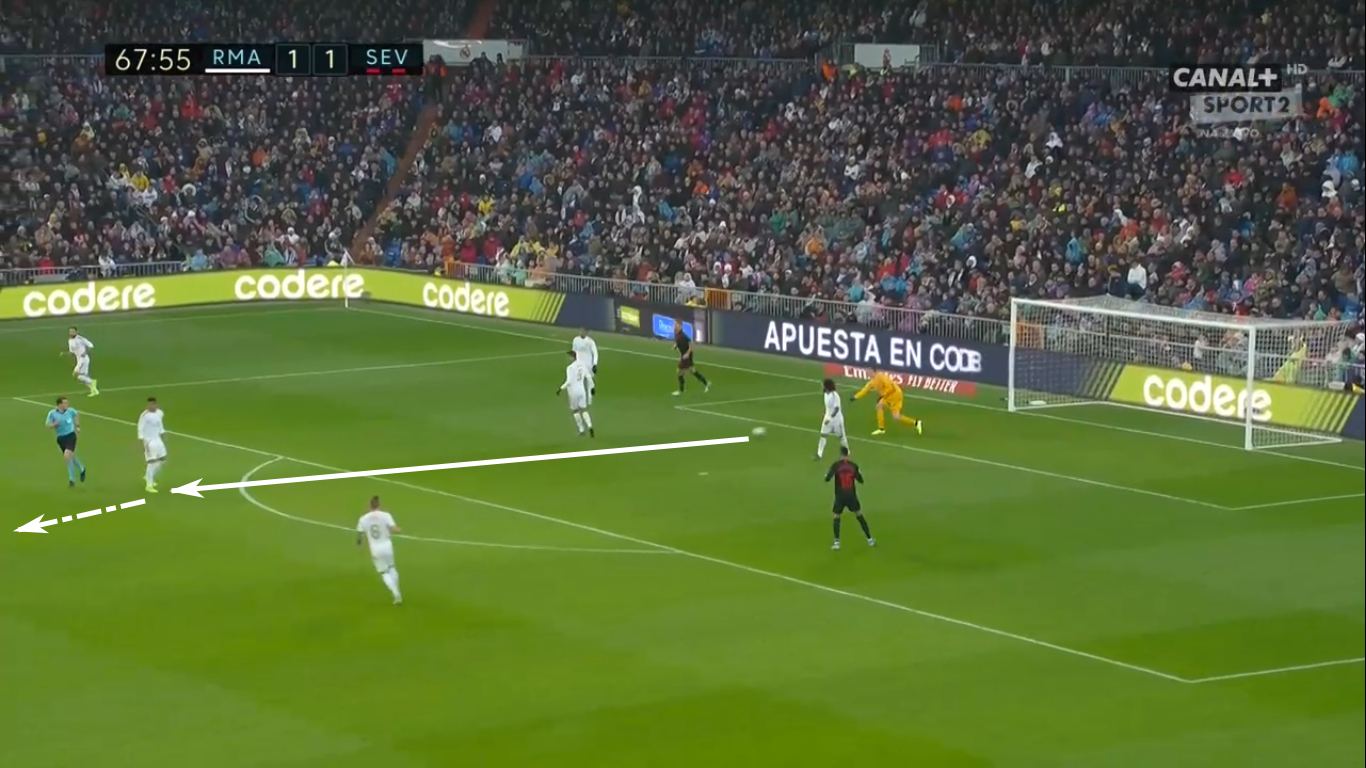 After Militão headed Reguilón’s early cross to Courtois’, the big Belgian rolled the ball out to Casemiro. Since Casemiro plays a significant role in protecting the backline and defending crosses, he’s generally central and deep as Madrid look to play from the back. In this scenario, he checked his shoulders, saw space and dribbled forward. 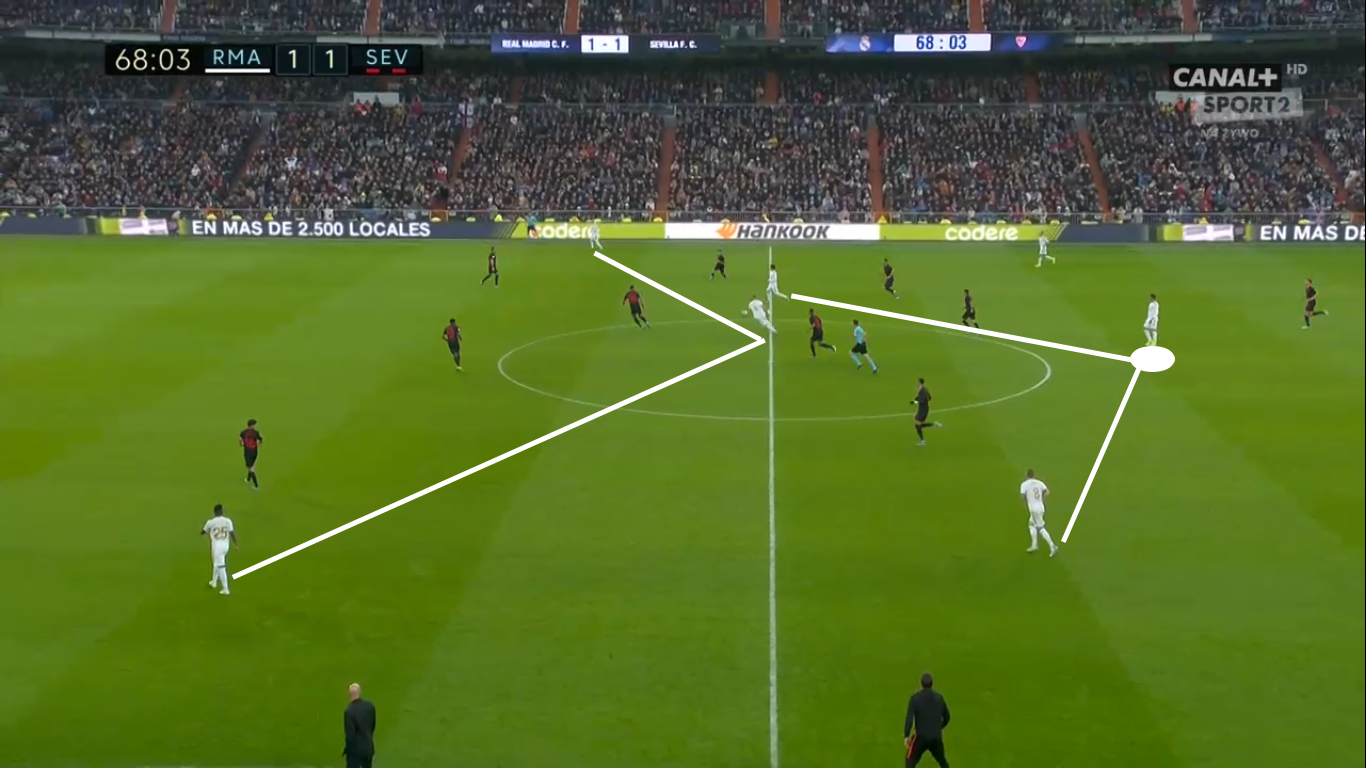 As Real start to engage the opposition and break lines, Casemiro generally continues to position himself just in front of the backline, offering a deep outlet and utilizing his expansive passing range. Here we see Kroos and Modrić just ahead of him, offset to the half-spaces. 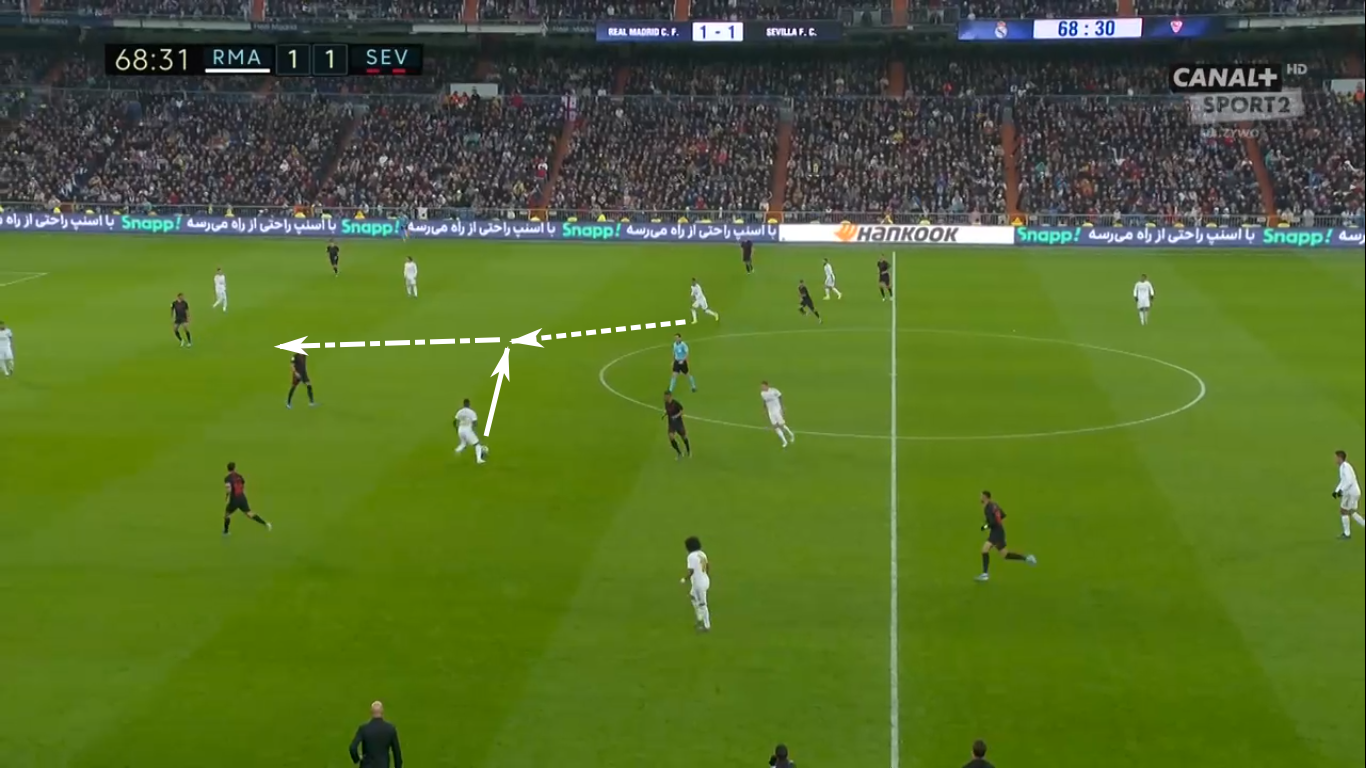 With possession in the attacking half secure, Casemiro has the freedom to push higher up the field in the central channel. Since Kroos operates as a left-sided regista and either Carvajal or Modrić will sit deeper on the right as a precautionary measure, Casemiro is free to relive his days as a striker, pushing into or near the box. In this case, Madrid turned the ball over and quickly recovered it with excellent counter-pressing. Marcelo’s header secured possession at the feet of Vinícius Junior. The young Brazilian played his compatriot centrally into space, which Casemiro attacked on the dribble. 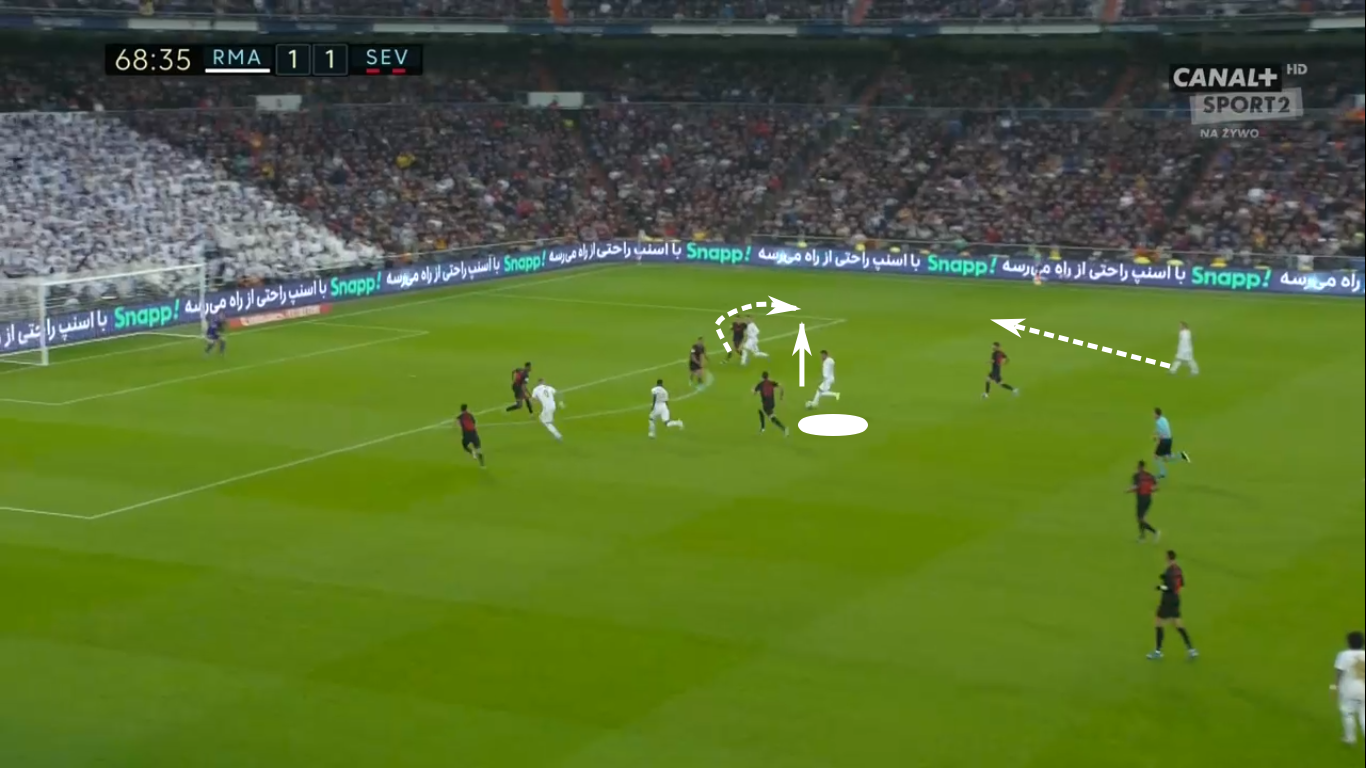 With the defence pinned, Casemiro played a ball behind the run of Vázquez, who wheeled around and collected the ball. Modrić made a late run to offer support. 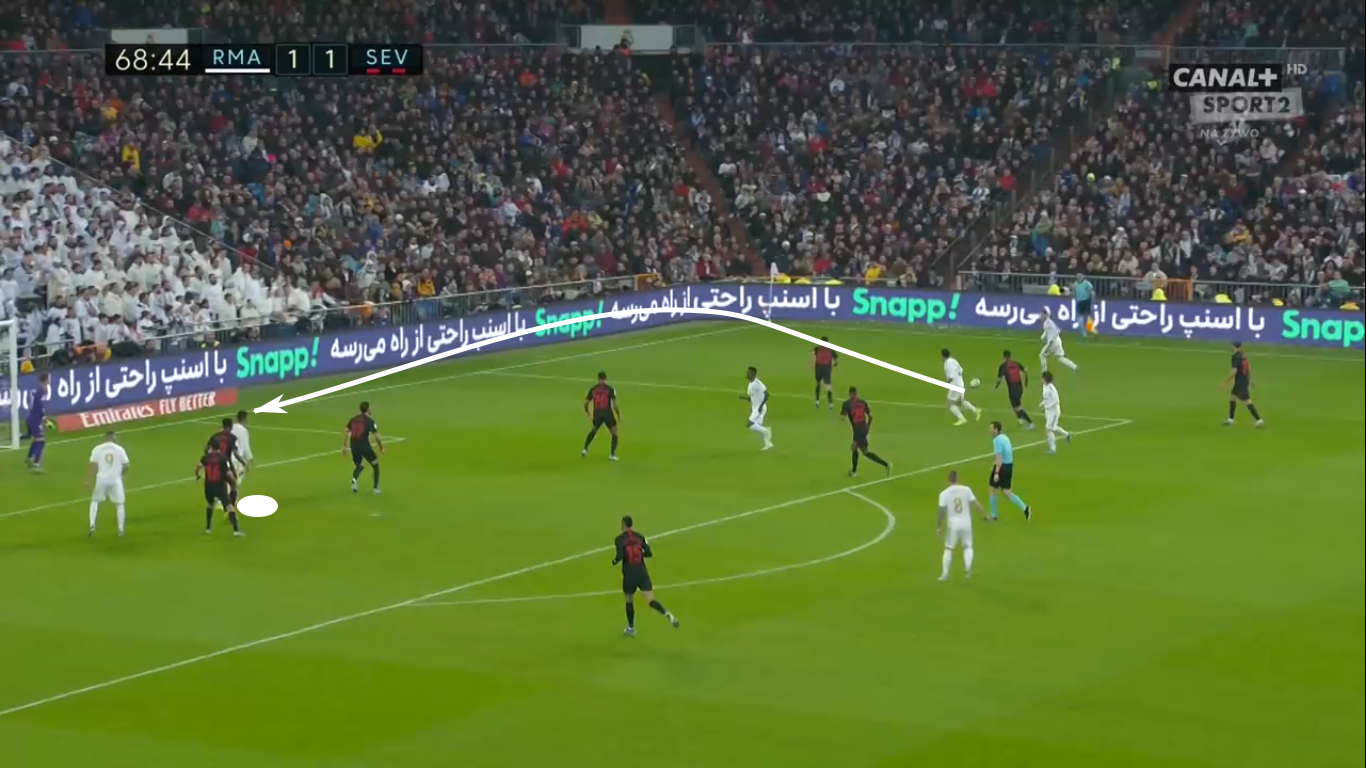 A quick combination with Modrić freed Vázquez for the cross.  His delivery was sent right to the forehead of Casemiro, giving the holding midfielder his brace and the game-winning goal. Casemiro’s untracked runs from deep were a consistent threat in this game. It’s a tactic Zidane has employed a lot this season. Look for this tactical trend to continue as it gets an additional big body in the box.

Though the tight affair saw both teams struggle to create meaningful chances in the first half, Zidane will be pleased with his side’s response in the second half. Casemiro’s performance was spectacular, adding 11 eleven recoveries (four in the opposition half) and going 3/3 on the dribble. Sevilla’s high press prevented clean attacks in the first half, but Real Madrid solved the problem and unlocked its former coach’s defence. Wednesday’s matchup at Unionistas de Salamanca, a third division side in the relegation playoff zone, offers Zidane a chance to rotate the side and offer some match fitness to the host of players recovering from injuries.

For Lopetegui, the defensive performance was rather good when taken on the whole. His men held Real to 0.99 xG on 13 shots, which shows Sevilla didn’t allow many quality chances. However, the issue is the attack, particularly the patterns and decision making of the players. While they gained access to the wings rather easily, the visitors were unable to penetrate centrally and create opportunities. Resorting to crosses from deep in the wings didn’t trouble Madrid as Sevilla produced a very poor .43 xG. There are certainly some issues to correct, one of which is creating meaningful scoring opportunities as Los Palanganas rank 12th in La Liga in goals from the run of play. Tuesday’s Copy Del Rey matchup against Levante offers an opportunity for a positive attacking performance.