The Serie A is finally back and it returned with a bang as Lazio and Napoli met on the opening night. It was two interesting teams facing off after an eventful summer. Napoli have hired Carlo Ancelotti as their new coach while Lazio have made some good signings. This tactical analysis will look at some of the talking points from the Serie A clash. The focus will be on Marek Hamsik’s new role, Francesco Acerbi’s Lazio debut and how Napoli looked under their new coach.

One of the main talking points from Napoli’s pre-season has been Ancelotti’s decision to use Marek Hamsik as his defensive midfielder. The Slovakian acts as the playmaker for Napoli and Saturday’s game offered the first test of him in this new role. Hamsik mostly impressed, but there were some issues too. 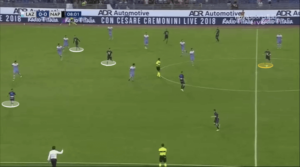 In the above image, we see the basic deployment of Hamsik as the defensive midfielder with Allan to his right and Zielinski to his left. Also, note the narrow positioning of the front three which is interesting to follow under Ancelotti.

The below image highlights Lazio’s midfield marking which left Milan Badelj as a free man for the Biancocelesti. Theoretically, this should have made it difficult for Hamsik to control possession but he demonstrated great ability to escape marking. 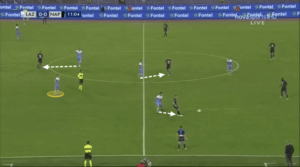 The first example of this can be seen below. Here, Luis Alberto uses his cover shadow to block a pass into Hamsik before going to press Koulibaly. Hamsik makes a clever little movement into space from where he can receive the pass from the centre-back. As you can see, Lazio’s man-orientated midfielders gift that space to Hamsik. 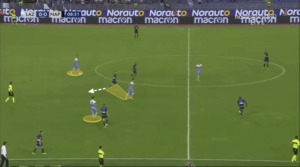 Upon receiving the pass, Hamsik instantly faces forward and can play vertically forward. In this case, he had two options to progress the attack. These small movements might not seem like much but they were key in destabilizing Lazio’s midfield pressing and allowed Napoli to get a grip of the game. 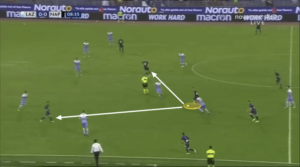 Hamsik impressed in possession and looked comfortable in his new role, but there were some defensive issues Ancelotti surely noticed too. First of all, Hamsik often pressed high on Badelj and thus leaving the space the defensive midfielder normally covers. Since he repeatedly pressed like this, it was surely an instruction from Ancelotti, but it lead to problems. Below. you can see how high Hamsik went to press. 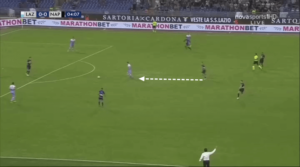 Lazio managed to escape this press on some occasions and then Hamsik’s high-pressing leads to troubles deeper down. The below image is the continuation of the above press as Lazio beat the press and attack Napoli’s half. Here, Allan has been forced to come across to cover for Hamsik’s high-positioning and with Hamsik coming back too, this leads to all three Napoli midfielders defending the same area on the left. As you can see, a vast amount of space has been left centrally. Lazio manage to break into this space but without creating a chance. Had Hamsik just stayed deeper with someone else doing the initial press, then this space would never have appeared. They will be punished for this if it continues. 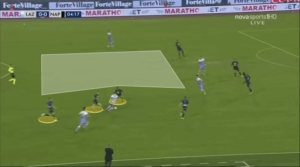 All in all, it was a promising first Serie A appearance in front of the defence for Hamsik. There are some issues though which Ancelotti needs to iron out for Napoli to succeed.

Lazio had an eventful summer with some interesting signings and apart from Stefan De Vrij, no vital players left Rome. There were two new signings from the start against Napoli with Badelj starting as the defensive midfielder and Francesco Acerbi starting as the central centre-back in Lazio’s 3-5-1-1. Acerbi has been signed as De Vrij’s replacement and I followed his performance closely to see how he would fare at his new club. In case you’ve missed his performances for Sassuolo in the last few seasons, Acerbi is a left-footed defender with excellent positional intelligence. However, his main strength is his passing and distribution from the back. He was a mainstay of Eusebio Di Francesco’s Sassuolo with the now-Roma-manager preaching a vertical possession style. His classy play from the back will be a great asset for Simone Inzaghi’s Lazio too, which he demonstrated in Lazio’s opening goal. 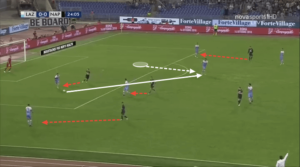 As you see above, Napoli often pressed Lazio high and they did so with clear man-orientations. I talked about Hamsik’s pressing earlier; here he is again marking Badelj as high as Lazio’s penalty area. Acerbi has the coveted ability to step out from defence and into midfield and this is exactly what he did here to become a passing option for Luiz Felipe. Acerbi moves into the space behind Hamsik and receives the ball. 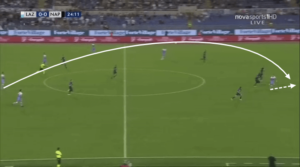 Acerbi then carried the ball forward before unleashing a 60-metre pass in-behind Napoli’s defensive line for the onrushing Immobile. The striker turned away from three Napoli defenders before finishing superbly to give Lazio the lead. Acerbi’s passing ability was evident to see already in his first game and he will give them a new dimension in their transition based attacks with his ability to spot runs and release the ball quickly.

I must admit that I was worried for Napoli, which I discussed in my season preview of them. This performance showed that some of my doubts were justified given the problems they sometimes faced in their collective defending where they left spaces in midfield. They also struggled badly to contain Immobile’s runs into depth, particularly in the first half when the Italian was very lively.

However, Napoli looked better in possession than I think anyone could have guessed with Hamsik pulling the strings well. It was an interesting mechanism to see Ancelotti’s deployment of the three forwards quite narrow with full-backs expected to bomb on down the wings. Milik made repeated dropping movements from his centre-forward position into midfield to connect the attack. Dries Mertens will be perfect for that role when he’s fully fit. The attacking full-backs leave the two centre-backs quite exposed, and with Hamsik also moving forward when he can I think this might turn into a problem for them. But the overall impression is that Napoli look better than I had guessed and this was a very impressive win in a tough away game.

In the season preview, I called Ancelotti “football greatest asset-manager” meaning he is very good at allowing the tactical methods of his predecessor to remain initially as he makes little tweaks. Over time though this leads to troubles as he has been left behind tactically in recent years. It was, therefore, telling to see that Napoli’s opening goal came from one of Maurizio Sarri’s trademark moves; the lofted diagonal pass in-behind from Lorenzo Insigne towards Jose Callejon. Time will tell if Ancelotti at Napoli will be a success, but he sure made the perfect start to his career in sky blue.

Lazio vs Napoli was the biggest game of the opening Serie A weekend and the game didn’t disappoint. Lazio looked a bit sluggish but Napoli impressed and might be set for another tilt at the title if they can keep these types of performances up. Either way, this will be a fascinating season in Italy and as always you can follow the tactical talking points with our tactical analysis throughout the season.