Thanks to a lacklustre December, Manchester City went from table toppers to chasing Liverpool heading into the new year. Despite their vital 2-1 win in January over the Anfield outift, Man City are still left four points adrift. They did manage to end their title rivals’ 20-match unbeaten run.

City only lost twice in their record-breaking campaign a year ago. They were defeated on three occasions in December 2018 alone. While the title holders were sunk by a pair of improbable strikes by Crystal Palace’s Andros Townsend and Leicester City’s Ricardo Pereira, there was a common denominator in those matches.

The absence of Fernandinho at the base of midfield was apparent. Pep Guardiola has experimented with Ilkay Gündogan and John Stones as replacements, yet neither player proven to be capable.

Even at 33 years of age, Fernandinho is still a vital cog in Guardiola’s system. He’s also very tough to replace because few players boast his vast array of attributes. The Brazilian can shield the defence, play through the opposition’s high press and maintain control.

In fact, when examining the underlying numbers from last season for Fernandinho alongside Sergio Busquets, another premier deep-lying midfielder, there are striking similarities. 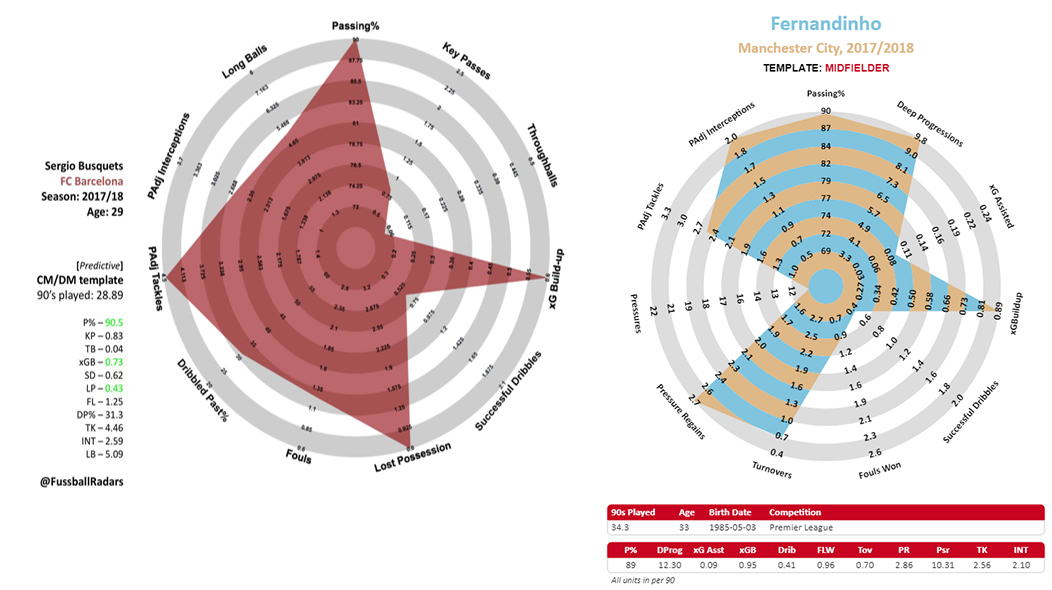 Of course, Ernesto Valverde’s system at Barcelona differs from Guardiola’s. Fernandinho is however just as involved in Man City’s build-up, and is more defensively active.

Gundogan a square peg to Fernandinho’s round hole

When Gündogan started against Leicester City, it was almost a reflex for the German international to roam forward. This meant that there was less build-up in Zone Five just in front of the back line. As a result, it was easier for Leicester to win possession in the attacking third.

Notice how Fernandinho was able to hit a variety of longer passes from Zone Five, to the flanks or centrally. Gündogan, however, either passed backwards to one of City’s centre-backs or wasn’t even present in those areas at all. 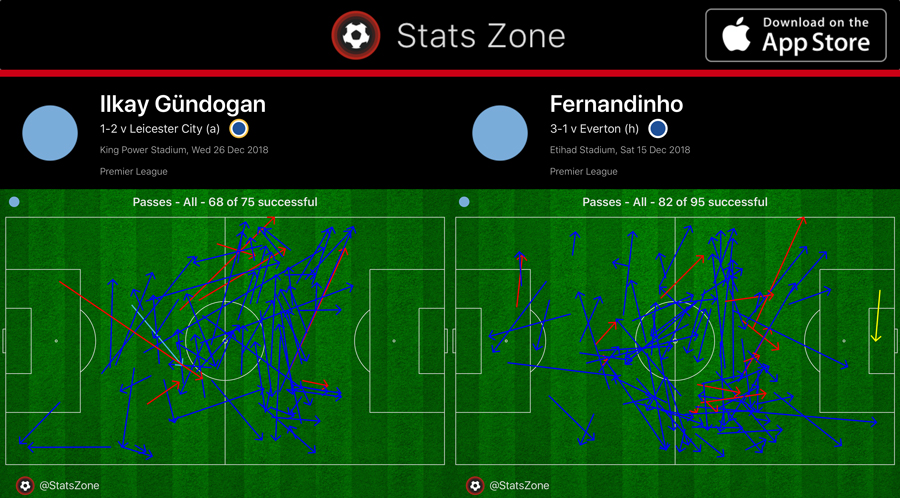 That’s not to say Man City have always won with Fernandinho in the starting XI. After all, City suffered three straight losses against Liverpool last season in the Champions League and the Premier League. Fernandinho started in each of those fixtures.

However, City are still weaker without Fernandinho. As seen below, the scoring dries up, the defence concedes more often and that leads to fewer points over time. 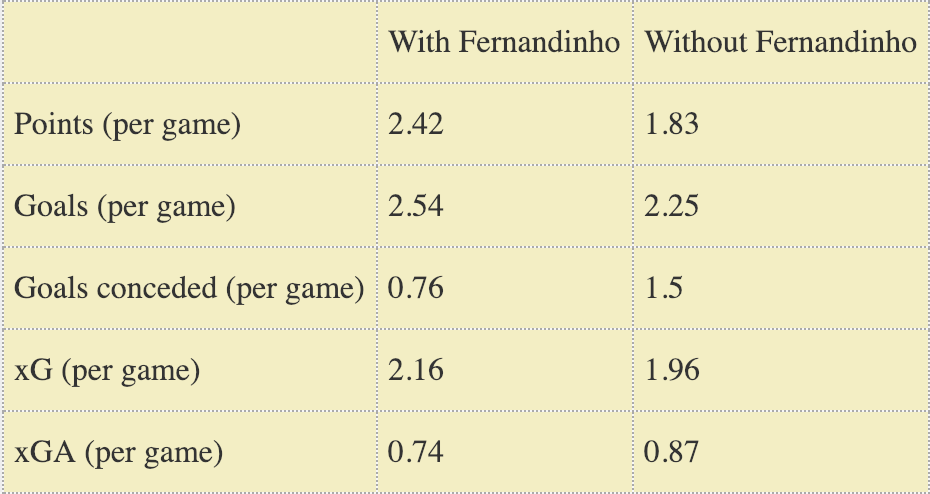 The 1.42 expected goal difference (xGD) with Fernandinho compared to the 1.06 xGD without him is quite telling on its own. While they do concede more goals than they should when examining the expected goals against (xGA), Man City’s midfield anchor is such a brilliant defender, it’s like having a third centre-back in front of John Stones and Aymeric Laporte. 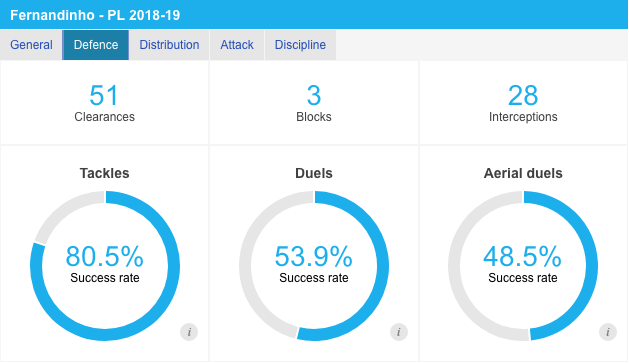 Having that player in front of the defence reduces high-quality chances for the opposition. It also ensures that the defence won’t be exposed.

Fernandinho’s varied distribution is quite telling, too. Most of his attempts are lateral or forward passes. His ability to receive the ball square, pivot and pick out the right pass is so underrated and it’s precisely why no other player in Man City’s squad is capable of replicating this role. 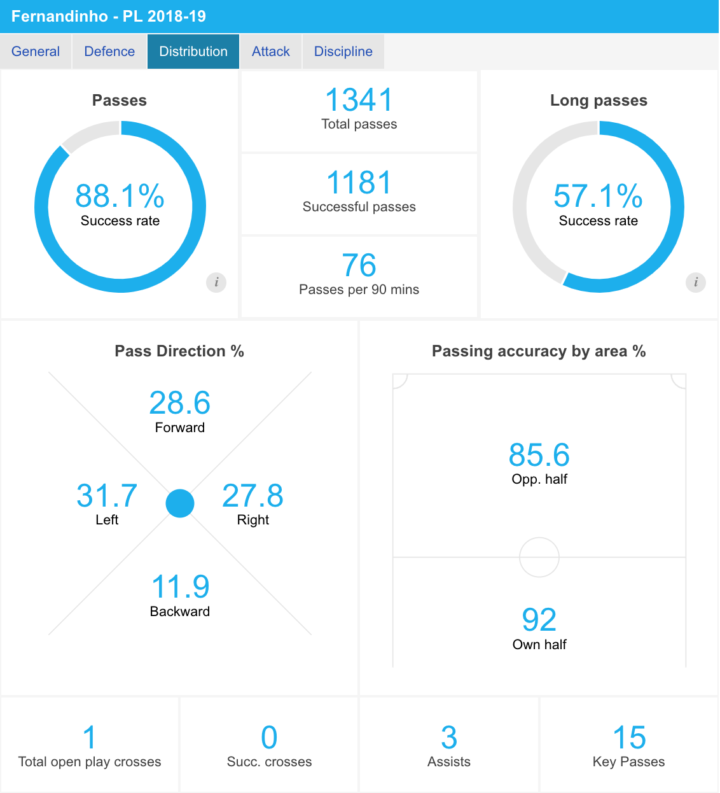 Against Southampton, when Fernandinho returned to the starting XI for City, he was the key to beating the Saints’ high press. But then Ralph Hasenhuttl noticed that there needed to be extra attention on Man City’s Swiss Army knife in midfield.

Hasenhuttl responded by keeping two players close to Fernandinho when Southampton pressed high into the attacking third. This meant Laporte and Vincent Kompany had to pass to Oleksandr Zinchenko, who was noticeably shaky on the ball and coughed up possession before Southampton equalized through Pierre-Emile Hojbjerg.

When Southampton fell asleep at the wheel, that’s when the centre-backs had Fernandinho as an outlet. Deploying that intense pressing for 90 minutes is incredibly difficult, especially when a team is still adjusting to the system.

Last year at this time, it was apparent that Liverpool needed to upgrade at goalkeeper and centre-back. The club responded by signing Virgil van Dijk and Alisson for approximately £142 million combined. However, the Reds have been duly rewarded this season and own the league’s best defensive record by a landslide.

Now the script has reversed. Man City need another deep-lying midfielder in Fernandinho’s mould just in case he’s unavailable for a stretch of games. It’s no surprise, then, that Lyon’s Tanguy Ndombele has been heavily linked with the Citizens.

Ndombele is not a traditional holding midfielder, although he offers very similar qualities to Fernandinho and drew comparisons to Yaya Toure. Ndombele is a box-to-box player but averages similar through passes and forward passes per 90 minutes as the Brazilian and tracks back to recover possession as well.

Whatever transpires in January or beyond, it’s clear that Man City’s title hopes live and die by Fernandinho. He only missed four Premier League matches last season and they won the league convincingly. If he’s absent for any others, then City risk slipping even further behind Liverpool in 2019.

All stats and analytics via Wyscout