Manchester City fell to their third defeat in four games and second in a row in the Premier League, when they were beaten by Leicester City 2-1 at the King Power Stadium on Boxing Day.

Following Manchester City’s defeats to both Chelsea and Crystal Palace in previous premier league games, the Boxing Day meeting between the former champions, Leicester and the current champions Manchester City, had huge implications in the title race. With Liverpool showing no signs of letting up and Tottenham in red-hot form behind Manchester City it was somewhat a must win for the boys from Manchester. However, due to a few notably poor performances and one or two absentees, Manchester City weren’t able to reach their peak powers and Leicester City dealt with them rather comfortably throughout the game.

In our tactical analysis, we are going to give an overview of where things perhaps went wrong for Manchester City and where they went right for Leicester City.

Manchester City set-up in their nominal 4-3-3, which when in possession morphed into a somewhat 3-4-2-1 with Danilo tucking in beside John Stones while Fabian Delph would invert into a defensive midfield position alongside Ilkay Gündogan. The thinking behind the Delph move and the use of inverted full-backs has been well documented, however, in this game, Pep Guardiola knew that extra support was needed in the defensive midfield position and Manchester City’s defensive transitions without the presence of Fernandinho in the heart of the midfield. Delph played incredibly close to Gündogan and for the majority of the early moments of the first half this allowed Manchester City to dominate the ball and restrict Leicester’s attacking intent.  Both Kevin De Bruyne and Sergio Agüero returned to the starting 11 with Kyle Walker making way for Danilo.

Leicester City named an unchanged 11 that impressively beat Chelsea 1-0 at Stamford Bridge in the game prior to this one. The Midlands side operated in a 4-5-1 which for the most part was quite sound defensively. The selection of three mobile central midfielders made it difficult for Manchester City’s dangerous attackers to find space in the half-spaces. Hamza Choudhury was particularly effective in occupying his defensive half-space and nullifying the threats posed in that area. 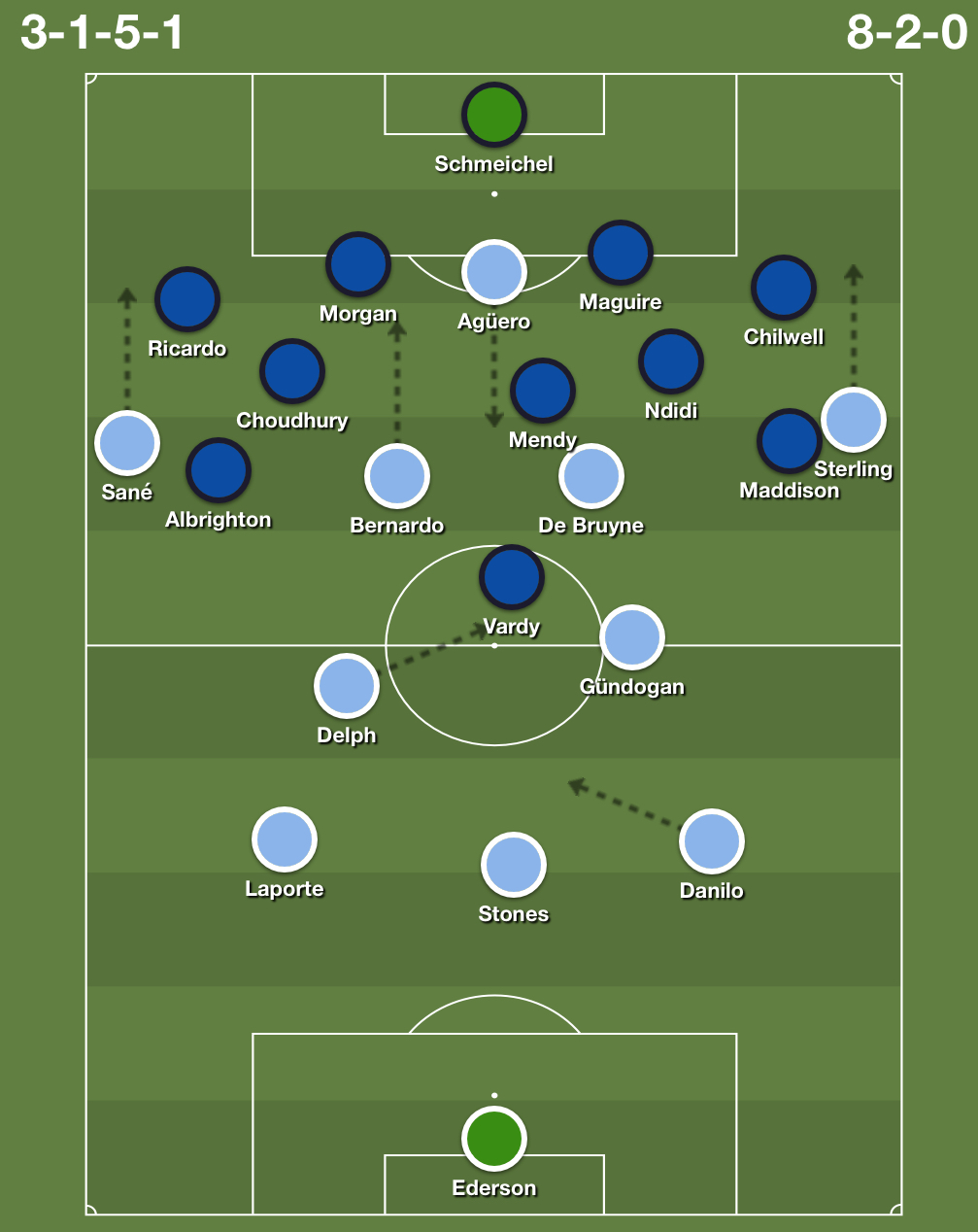 For the first 15 minutes of the game, Manchester City were comfortable in recycling possession around Leicester’s low block without really penetrating. The first time they did penetrate Leicester’s lines it proved to be very effective. Sergio Agüero dropped in between the midfield and the back four of Leicester. This movement disrupted the defensive line of Leicester City and a quick pass into the onrushing Bernardo Silva, who was moving into the space vacated by Agüero, and Manchester City were in on goal. Bernardo Silva finished calmly and with their first meaningful attack, Manchester City had taken the lead.

Leicester hit back sharply, however. Manchester City surrendered possession cheaply in midfield with men ahead of the ball. This is not the place you want to surrender possession against a team like Leicester. James Maddison quickly found Jamie Vardy who put a delightful ball into the far post for Marc Albrighton who had easily slipped the marking of Fabian Delph to equalise. This area of a pitch quickly became a problem for Manchester City. Delph was arguably one of the most impressive left-backs in the Premier League this season, however recently he has begun to look more and more like a central midfielder who has been hastily repackaged as a left-back and it was fairly obvious that Leicester felt they could take advantage of this area. Not long after Leicester’s goal came, Choudhury had a very similar chance at the back post where he managed to escape the clutches of the England international.

As was noted extensively on Match of the Day by Danny Murphy, midway through the second-half Claude Puel tweaked his tactics ever so slightly. He moved James Maddison into a more central area behind Jamie Vardy, he moved Mark Albrighton to the left-hand side of the midfield and pushed Hamza Choudhury into a wide-right position. The tactical tweak almost immediately paid off for Leicester as they managed to carve out a flurry of chances in the lead up to the half-time whistle. Maddison was much more involved in the build-up play and the connections between the midfield five and lone-striker Vardy were much better. In this 10-minute spell, Manchester City looked unable to cope with the Foxes.

A lack of response

Having been pegged back immediately by the home side and then almost falling behind just before half-time, one would have expected Manchester City to come up firing in the second half but it wasn’t the case. The Champions’ build-up play was slow and lethargic and looked lacking in ideas. They were struggling to create chances and shots on goal and it seemed as though Leicester were dealing with Manchester City quite comfortably.

One of Manchester City’s attacking weapons that has appeared most blunted in recent weeks is their two wingers, Raheem Sterling and Leroy Sané. A fairly obvious ploy to stop a good wide player is to double up on him. But this is often far easier said than done. To be effective this requires the defensive team’s wingers to be switched on and willing to help out. In the previous game at the Etihad Stadium the two wingers that Manchester City came up against were Jeffrey Schlupp a former left-back turned central midfielder and Andros Townsend who had an incredible game defensively speaking. On Boxing Day Manchester City faced Marc Albrighton who has done his fair share of defensive work during his time with Leicester and for the majority of the game Hamza Choudhury who is more of a box to box midfielder than a winger who is likely to neglect his defensive duties. This is one way in which Manchester City’s wingers have been nullified in recent weeks.

Another reason is simply the lack of speed and incisiveness in Manchester City’s passing. Getting their wingers 1v1 is a huge part of Manchester City’s game but to do this the ball and the opposition must be moved around quickly. The use of the inverted full-back is one way to do this. The movement of Delph towards the centre of the field should, in theory, attract the attention of Leicester’s right midfielder leaving Leroy Sané 1v1 against Ricardo Pereira. However Delph never really looked threatening enough with the ball to warrant the right-midfielder to press him so instead he would stay close to his right-back partner in order to double up quickly on Leroy Sané. Receiving the ball in a standing position against two defenders is even too much of an ask for someone of Sané’s ability.

A cause for concern?

Manchester City fans will now be wondering if they should be concerned about this run of defeats and what seems a persistent failure to keep clean sheets. The answer is yes and no. There has been a drop off in Manchester City’s performances. The attacking output has dipped as Manchester City are now taking less shots than they were earlier in the season. The opposition are getting into their defensive third more regularly and easily and although this hasn’t resulted in a greater number of shots being faced it is nonetheless a possible worry for Pep.

However on the other hand, relatively speaking Manchester City have had a fairly terrible time of it with injuries and fatigue. The likes of Bernardo Silva and Raheem Sterling have hardly had a break since the start of last season, the same goes for Kyle Walker, who’s lack of a meaningful break has been really starting to show in recent games. Kevin De Bruyne is just getting back to fitness following three months out of action. Sergio Agüero is also just coming back into fitness following a minor injury. Benjamin Mendy is still missing at left-back and most importantly Fernandinho has missed the last two games through injury. If you compare this to Liverpool so far this year their two notable injuries that they have picked up are Joe Gomez and Joel Matip which in the grand scheme of things aren’t huge misses. The rest of their top stars are unscathed and had relatively short World Cup campaigns.

On top of this conceding wonder strikes like Manchester City have done against Crystal Palace and Leicester isn’t something that will happen every week. Nor is missing chances like they did against Chelsea. One must also pay credit to the opposition in recent weeks and particularly to Leicester. They defended the half-spaces incredibly well and that’s what must be done to nullify Manchester City and they took their chances when they came to them. The midfield three of Mendy, Ndidi and Choudhury were especially impressive as was young James Maddison who continues to shine in his first season in the Premier League. If they can continue to pick up results as they did on Boxing Day, a Europa League spot should not be out of the question for Leicester.