Manchester City returned to winning ways with a 3-1 victory away at Southampton in the Premier League. The win comes as a much needed boost for the champions as they had lost their last three Premier League games before travelling to Southampton. However, with the returns of Fernandinho and David Silva, the Blues looked much more on their usual game. In our analysis today we will look at the importance of David Silva and Fernandinho in particular and how their returns aided Manchester City in securing victory over Southampton.

Manchester City as usual lined up in their 4-3-3 formation. Zinchenko came in for the suspended Fabian Delph, Vincent Kompany came in for John Stones with Aymeric Laporte and Danilo the only defenders to retain their places. Fernandinho came back from injury to replace the newly injured Ilkay Gündogan. David Silva returned to the starting line-up to fill in for Kevin De Bruyne and finally Riyad Mahrez replaced Leroy Sané on the flank. 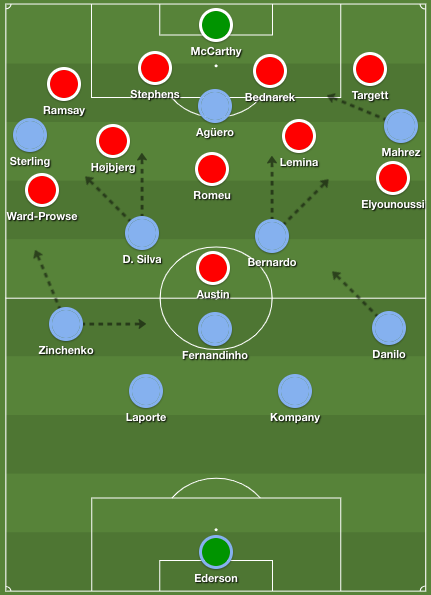 It has taken a slump in form while Fernandinho has been out injured for many people to finally realise his importance to Manchester City. Many people were saying that Guardiola has been found out by Crystal Palace and Leicester. While that may be true, the fact that Manchester City’s midfield enforcer was absent may also be a large contributing factor to City’s dip in form.

However, the Brazilian midfielder was back for Manchester City’s Premier League clash with Southampton and it was certainly noticeable. Not only does Fernandinho have the ability to position himself expertly to prevent quick counter attacks from the opposition but his forward passing is also a hugely important aspect of Manchester City’s play. 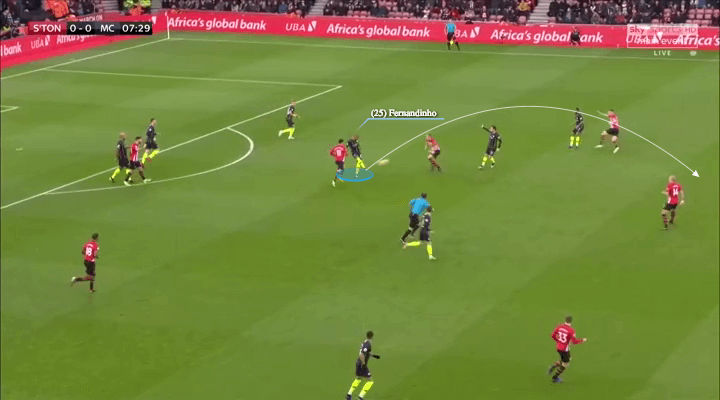 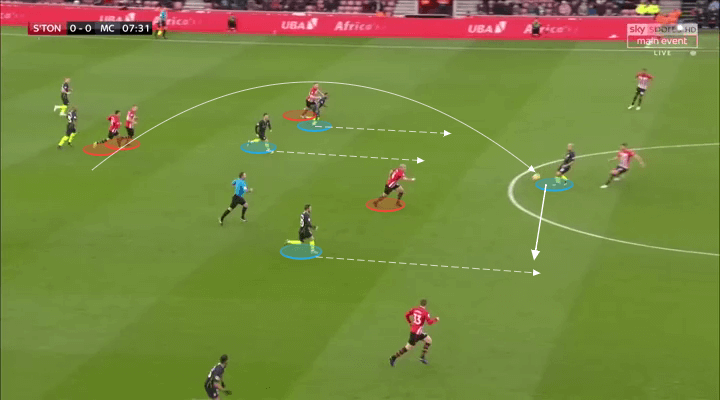 Above we can see the intelligence and composure in Fernandinho’s game. Under pressure from two Southampton defenders and with a bouncing ball he plays a first time pass into the feet of Sergio Agüero. This quick release has bypassed Southampton’s midfield press and has caught four of their players ahead of the ball including members of their midfield. In turn Manchester City now have three players breaking in behind Southampton’s midfield and can counter. 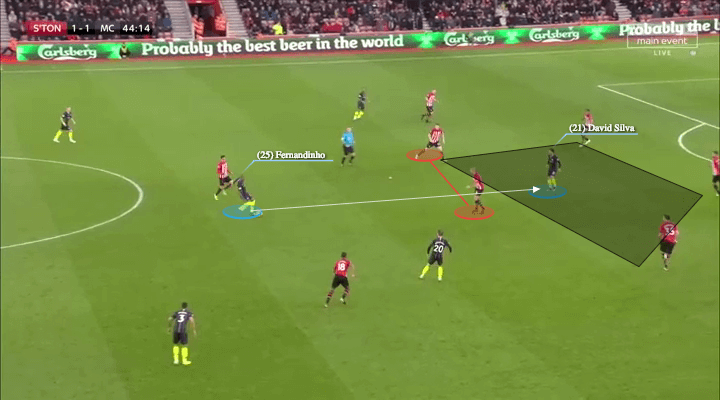 Another example of Fernandinho’s ability to break lines with his passing is shown above. Fernandinho is again under pressure from a Southampton player but he can see the opportunity to break the lines with a vertical pass and allow David Silva space and time in behind Southampton’s midfield. The defensive midfielder finds Silva comfortably and a few moments later Silva has found Raheem Sterling who’s cross deflects in off the defender. If Fernandinho hadn’t played his pass the goal wouldn’t have come at this moment. 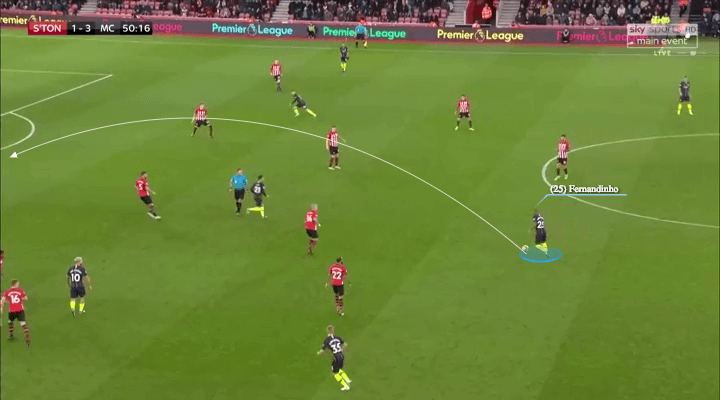 His passing was also excellent over longer distances. Above we can see Fernandinho with time on the ball which is a dangerous place for Southampton to be in. Off screen Raheem Sterling has ghosted in behind his marker and is making a run towards goal. 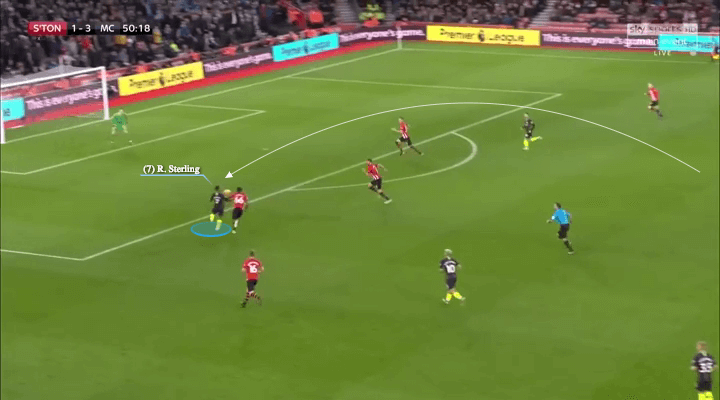 The ball falls perfectly for Sterling who just can’t get the ball down for a strike at goal.  Although John Stones and Ilkay Gündogan are both fine footballers, neither really has the range of passing that Fernandinho has. Over the past weeks Manchester City have been having less shots and haven’t been generating the same kind of xG as they were when Fernandinho had been an ever present at the base of midfield. The loss of Fernandinho’s passing ability in midfield has certainly been a contributing factor to Manchester City’s attacking numbers taking a dip.

As mentioned earlier Fernandinho’s positioning is always exemplary and below is an example of such positioning. 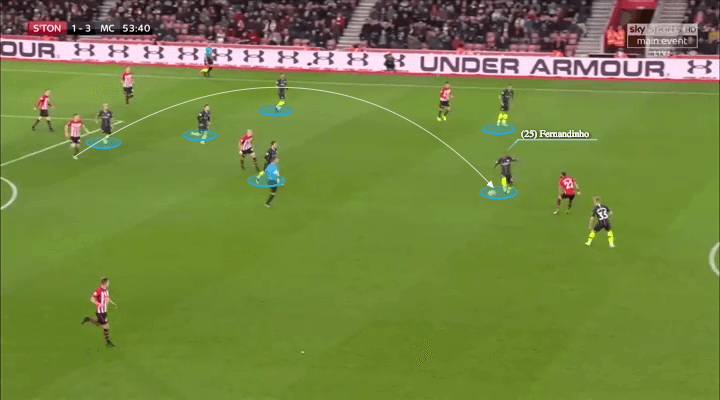 Southampton are attempting to clear the ball from a Manchester City attack, into the feet of Nathan Redmond. If Redmond is able to get control of the ball, Manchester City would be in trouble as they have five players caught ahead of the ball. Fernandinho reads this danger and steps in preventing the ball reaching Redmond’s feet. He then proceeds to drive forward into the space to start another attack.

As with Fernandinho, David Silva has at times seemed perennially underrated. However in his absence in the past few weeks and with his fitness having been an issue we can clearly see how crucial David Silva is in order for Manchester City to play well.

His ability to find space and time in offensive half-spaces is second to none in Manchester City’s team and as he did against Southampton last weekend he has developed a real knack of scoring goals. Below are a few examples of the spaces that David Silva finds that it seems no other City play can do as well or as regularly as the Spaniard.

Above we can see that Silva has positioned himself in the space between Southampton’s midfield and defence and is making himself available to receive the ball from Zinchenko. His position, should he receive the ball, then allows City to attack in a 2v1 situation on the far side with Raheem Sterling against Southampton’s full-back. This kind of situation is one which Silva often works himself into and proves to be a very effective tactic for Manchester City as seen below. 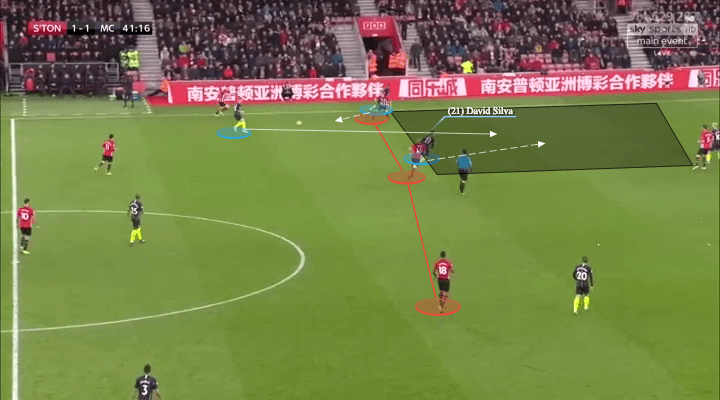 David Silva notices the space vacated by Sterling and his marker and intelligently makes his move while the ball is being laid back into Zinchenko. Silva receives the ball and can drive into the Southampton box pulling the ball back for Sergio Agüero who fires his shot wide. 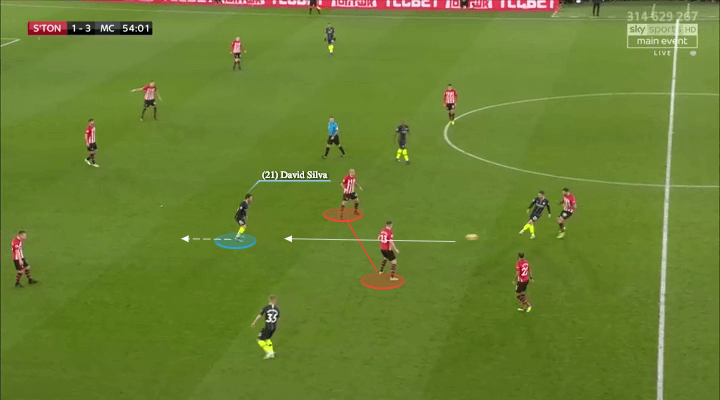 As in the previous examples we can again see that David Silva has found himself in behind Southampton’s midfield press. He took two or three steps backwards to make himself a viable passing option and in doing so can spin and again combine with Raheem Sterling in a dangerous position. 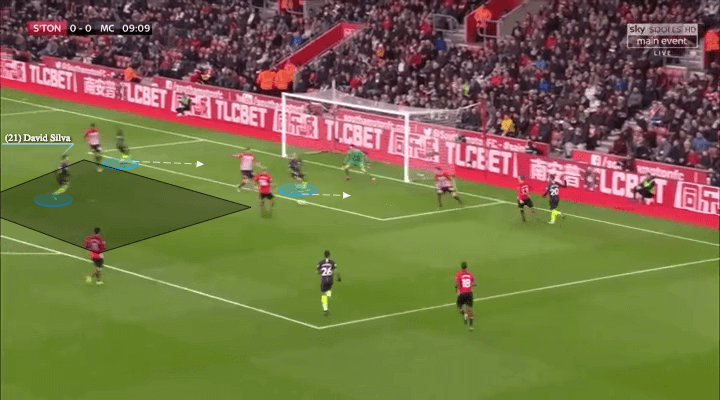 His intelligent movement off the ball and his awareness of the movements of his teammates around him was a contributing factor in his goal. Some good interplay between Mahrez and Bernardo Silva on this near side lead to Bernardo breaking in behind Southampton’s defence and running towards the byline.

Agüero and Sterling both make similar runs towards the goal which drags the Southampton defenders towards their own goal. David Silva notices this and applies the breaks on the penalty spot. By stopping his run on the basis that the defenders are running away from him to track other runners, he affords himself time and space in the penalty area. Bernardo finds him with the cut-back and Silva finishes calmly.

After the previous two matches against Leicester and Crystal Palace it isn’t too surprising that when two of Manchester City’s most important players return to the side the performance levels improve drastically. Fernandinho and David Silva are vital cogs in the Manchester City machine and despite their ages of 32 and 33 respectively they don’t appear to be declining. If the champions are able to maintain their fitness over the second half of the season they will certainly have a much better chance at chasing down Liverpool and retaining the Premier League title.