France has all it takes to win the FIFA World Cup 2018. Be it a strong midfield, world-class strikers, and strong aerial ability at the attacking front. However, their Quarterfinal clash against Uruguay could be the hardest battle they have and would face in Russia 2018 – if they are through to the Semis. Uruguay has a strong defensive set up which gives them a great tactical advantage in offence too even without Cavani. However, Les Bleus still remains the favourites to mark their place in the Final Four. Let’s see how they can beat Tabárez’s men.

Uruguay has a strong defensive setup including the world-class central defence partnership of Gimenez and Godin who restrain to their zone like a brick. Then the marking system of the home team in the defensive phase is too organised and tight to give space to the opponents. Tactically, they fill up the deep areas to congest them leaving only the flanks open where they are ready to take over the opponents with 1v1, 2v1, or if needed 2v2, as it can be seen in Uruguay vs Portugal and Uruguay vs Saudi Arabia. This creates a strong and balanced defensive setup for La Celeste.
In such case, the opponents can thrive only if they are good to counter the press. Fortunately, the attacking trio of Giroud, Griezmann, and the midfielder-cum-striker Mbappe are the kind of resources France needs to breach through the press in various settings.
As Uruguay tend to crowd up the central plane to force opponent play wider while France also can hardly penetrate a deeply concentrated defence, the best strategy for Deschamps’ men would be to carry out their passing play at the flank and half spaces. Specifically, Mbappe or Leymar at the attacking wing can pull out to the respective widest possible plane while working with Griezmann and Giroud on cross passings and off-ball cross movements through the wings and half spaces. This would enable them to overtake and cut through the defenders from the wider planes and penetrate to the inside in the advanced regions. A similar kind of play was observed in France vs Denmark as well where Lemar brilliantly worked his way up the half space while cutting deep between the lines. However, given France’s passing play is not horizontally coherent (see passing map below), the deeper moves of the winger often remained unsupported by the teammates.
This can be dealt with by keeping the passing play in flanks and half spaces but in a dynamically coherent setting so that France passing structure maintains the possession when they get to penetrate in deeper dangerous zones too. Thus, with the teammates also joining the player cutting deep without any delay opponents would find it difficult to stop France’s passing flow. Besides, Mbappe is highly capable to make diagonal runs towards the opponent box, as can be seen in France vs Peru. His lateral transits across the planes can worry the defenders.
Executing the passing play at the wider planes to counter the press there can also force Uruguay to pull out more defenders to over-men France. This would dilute the central region allowing the away team to play long direct balls through the centre for which Giroud is there to pick them anywhere and work his way out to the goal. This is another way they would counter Uruguayan press. France is in a position to quickly grab any opportunity to reach Giroud quickly from deep – the Chelsea man is well equipped for the goal area while possessing aerial, volley, and quality finishing skills. Moreover, Giroud should have his teammates covering or shielding him while he wins long first balls.

Besides the long balls, France can also exploit deep regions, which can be diluted by Uruguay in their attempt to tackle France passing plays out wide, by making space for Pogba who could wonders out of his creativity in the dangerous areas. However, this will less likely to happen as Uruguay’s defensive setting is well rigid in the central region – and their deep attacks give them a defensive advantage too (see Uruguay vs Saudi Arabia).
Though in transitional phases, France’s passing combinations in the wider planes and alternating movements of players can work tactically as it will distract the defenders at some point even for short instances. France just has to be ready to exploit these deep transitional openings with Pogba and Giroud.
One element which fits well with France’s transitional plays is the dynamic formations they are used to play with. In their earlier fixtures of the Cup, they played with 4-4-2 but shifting to 4-3-3 in attacking and transitional phases with Mbappe joining the front two. Against Uruguay, though they have to exploit the wider planes using their passing combinations as part of their plain A. This calls for more fluid 4-2-3-1 formation from where they can shift to 4-4-2 in pure defensive phases, just as they did against Peru. As Cavani is unlikely to play due to an injury in the last match against Argentina, or wouldn’t be in the starting lineup possibly, Uruguay is likely to play with a more conservative low block approach with only one striker. Based on this, using 4-3-3 could isolate France’s front line from the midfield amidst Uruguay’s low block. On the other hand, a more layered 4-2-3-1 will give Deschamps’ men attacking advantage in multiple settings.
Similarly shifting to 4-4-2 in defence will also them to form the low block necessary to close down advanced Uruguay players. Unfortunately with Matuidi suspended, some of the midfield strength of Les Bleus could be compromised. But with centre-back converted fullbacks, Deschamps can use either of them to compress the midfield and thus to defend Uruguay’s attacks which are long and direct. Besides the strong defensive presence of Kante in front of the backline can frustrate Betancur – Uruguay’s source of creativity in the middle of the park. With Kante, France is empowered enough to slow down Uruguay’s attacks from the deeper regions.
Use of a low block and ensuring a compressed defensive half from the middle must be France’s only optimal method of defending Uruguay; with anything less than that, it becomes exposed. The goal conceded against the U.S. in the International Friendlies is an example before which France’s defence was shuffled easily as the opponents were left open from the dangerous sides. 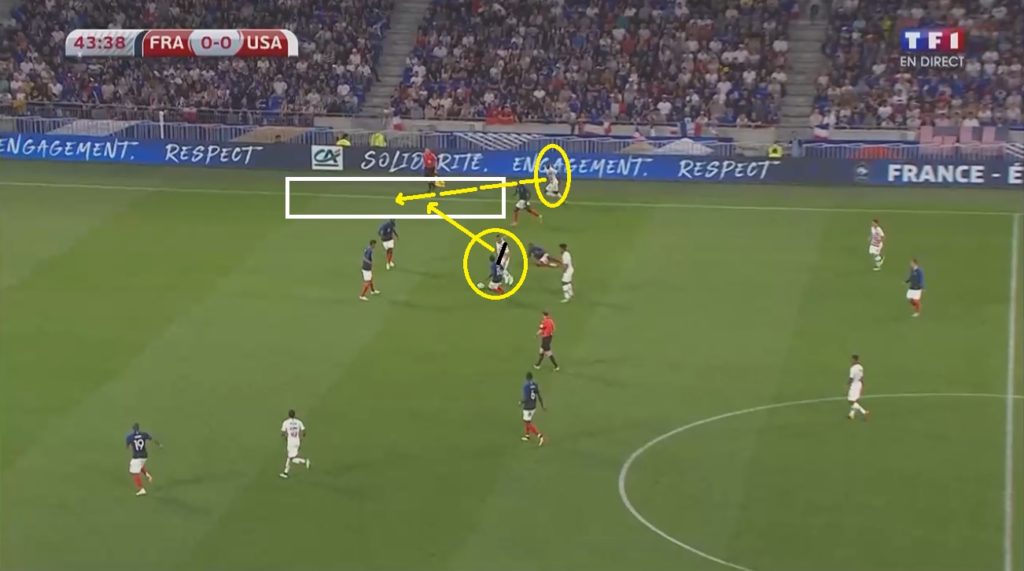 Given that France is not organised enough in defence with fewer bodies, they better make a low block and close down the opponents. This defensive arrangement will also provide necessary freedom to the French strikers to execute their passing play in the wider planes.

Closing down the opponents to defend set pieces

Other than stopping deep Uruguayan attacks, defending the set pieces is also a big challenge for France where it becomes exploitable. In their previous fixtures, France displayed poor organisation in front of their goal allowing the opponents to either score directly or off the rebounds. They tend to loosen their defence before rebound is expected. Against Argentina, Pogba’s short clearance of the shot led to conceding Messi’s goal on the rebound for which France defenders didn’t close him completely from the front while he was delivering on his rebound. As it can be seen Messi has space in his comfortable line of sight. The space being covered by another Argentine behind the two French defenders can’t actually be counted as any defensive cover, which makes the entire far-post region open for any natural striker, in case if it wasn’t Messi. The habit of short clearances by French defenders and the goalkeeper is also alarming. This gives back possession to the opponent and keeps the attack going in a dangerous way right in front of the goal area. 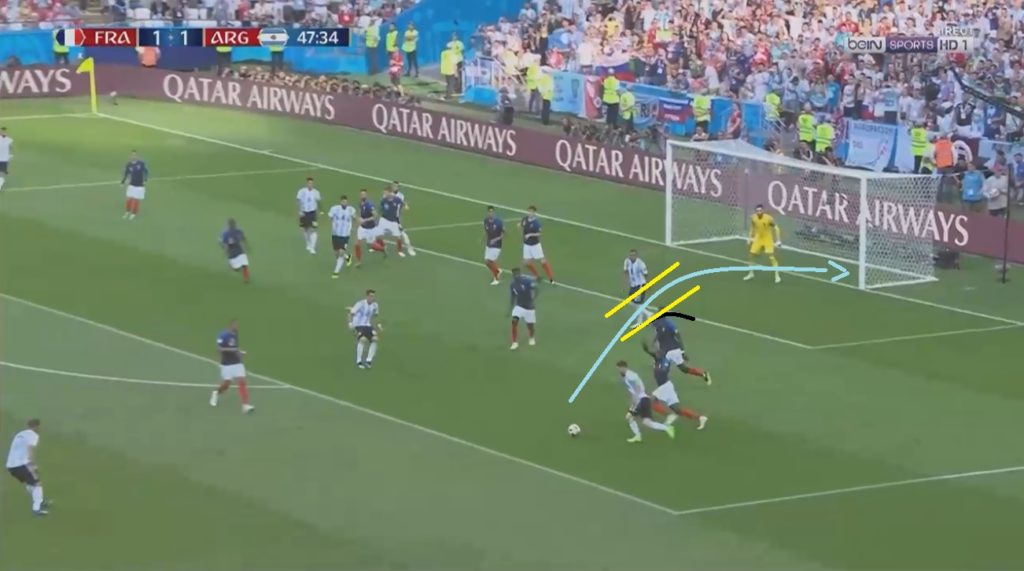 On the other hand, set pieces are the exact area where Uruguay are way clever and trained. Even though they just make fewer bodies available in the opponent box when playing set pieces to stop the potential counters. Given that France is slow to react in front of their goal, they better focus on outnumbering and closing down the opponents from the dangerous angles while defending Uruguay’s set pieces.

To sum up, France can overcome its defensive weakness by using a low block 4-4-2 setup while shifting to 4-2-3-1 when attacking. This will give them access to the wings and half spaces where they can execute decent passing plays and use the different combination of on- and off-ball movements to penetrate into the dangerous zones. Their ability to make it to the dangerous areas either by using short passing plays through the wider planes during transitions or using long balls through deep regions to bypass the deep-lying defenders and midfielders would be their competitive advantage over Uruguay who may play with one threatening attacker missing – Cavani. In the end, France has Mbappe – the man who can threaten Uruguay at the width, the very region where they prefer sitting as little as possible.