Uruguay are one of the true heavyweights of international football with two FIFA World Cup titles in their trophy cabinet. Granted, the last of those came in 1950 but Uruguay still manage to do well from time to time. Most recently their fourth place finish at the 2010 FIFA World Cup highlighted their quality. They have again qualified for this summer’s tournament and boast one of the best squads in Russia 2018 under mega-experienced coach Oscar Tabarez. Incredible for a country with a population just over three million.

Tabarez has been in charge of Uruguay for what seems like forever. The 71-year-old has a wealth of experience behind him having coached professionally since 1980. He’s had two stints with the Uruguay U20’s side and also coached Uruguay’s first team from 1988-1990. His current stint as coach of Uruguay started in 2006 and as mentioned he led them to the semi-finals in 2010. He also led them through a group also consisting of England and Italy at the last tournament. His organised 4-4-2 will be the basis for Uruguay this summer and his experience together with the top quality players at his disposal could be about to bring more success to the small South American country with the huge football heritage.

Tabarez sets his team out in a 4-4-2 and wants the team to be very compact when defending. They defend in a positionally-orientated system where the focus is to close off the centre and force the opponent wide. When the ball is won they often look to quickly transition through their devastating front two of Cavani and Suarez. Below you see their compact lines of four in their own half with Suarez just in front of the midfield in this scene. 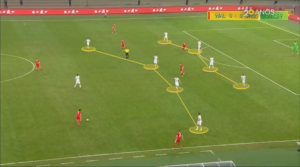 In the below image we see the way Uruguay start their defending. The front two of Suarez and Cavani are closely connected to the midfield four. Uruguay push the opponent into the wide areas by keeping such a narrow shape. They also lure teams into pressing traps as we’ll see. 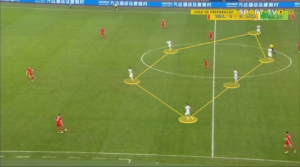 The below image is from a few seconds after the above image. Uruguay have set a pressing trap by allowing one pass inside: to the central midfielder. He is then pressed by Suarez who uses his cover shadow to block off a pass to the left-sided centre-back. Cavani is blocking the other centre-back. One Uruguay midfielder is putting pressure on the ball-carrier while the left-midfielder and left-back are both ready to sprint into pressing their closest opponents should the ball move there. 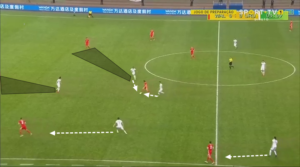 Uruguay are usually rock-solid defensively, largely thanks to the centre-back partnership of Diego Godin and Jose Gimenez but also thanks to Tabarez well-organised defensive setup which allows those two defenders to shine.

In attack, Tabarez has some interesting ideas. Below we see their usual setup in possession. The two full-backs push on down the flanks with the wingers (white circles) moving inside. One of the two central midfielders then drop deep to get on the ball and start the attack. 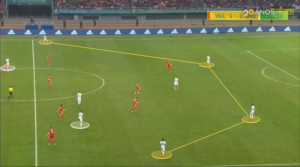 On other occasions, the central midfielder looking to receive will drop outside of the centre-backs instead of in-between them as shown above. Here, the midfielder drops into the right half-space as the full-backs again provide the width. Note the narrow position of the left-midfielder (white). 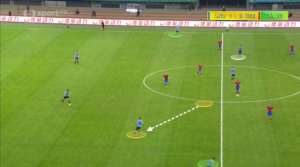 As they then progress the ball, the wingers will have positioned themselves in more central positions. One movement they often use to get in-behind the opponent is a run from the centrally positioned winger diagonally towards the wing behind the ball-near full-back. They probably do this to draw a centre-back out, leaving Suarez and Cavani in a numerical advantage against the remaining centre-back should a cross come in. 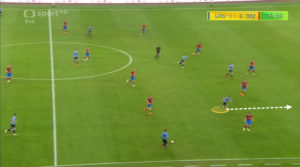 Strong in defense and clever in attack. Uruguay will definitely be a team to watch in Russia.

There are plenty to choose from here. Perhaps Diego Godin at the back? Matias Vecino in midfield? Edinson Cavani up front? In fairness, they’ll all be vital. But Luis Suarez will be the key man for Uruguay this summer. Uruguay will be disciplined, organised and solid defensively. If they score goals they’ll do well. The key to that is Suarez who has more of a creative role with the national team than at Barcelona. With Cavani as his strike partner, Suarez’ role is more of a second striker than number 9. The Barcelona man will be the one looking to link Uruguay’s midfield with their attack. He will be the man playing the final pass to put Cavani through. And of course, he will need to be deadly in the box. If Suarez delivers then Uruguay have every chance of making their stay in Russia a long one.

Uruguay have had a fantastic defence over the last decade. They’ve also had two of the best strikers in the world. The midfield area of the squad hasn’t quite had the same quality. With Inter midfielder Matias Vecino, Real Madrid’s youngster Federico Valverde, Sampdoria starlet Lucas Torreira and Bentancur among its options, however, Uruguay’s midfield are much closer to the world class level of its strikers and centre-backs. While competition to start is fierce, the Juventus midfielder Bentancur has a good chance of starting the tournament in the XI. Tabarez will likely go with Vecino and Bentancur or Valverde in central midfield. It would give Bentancur the perfect platform to showcase his talent to the world. After spending his first season in Turin this campaign, where Massimiliano Allegri has slowly integrated him into the team, Bentancur should be fully fit and full of energy after spending lots of time on the Bianconeri bench. He’ll bring composed passing, great reading of the game and strong tackling in midfield; qualities very much appreciated by Tabarez. If he has a good tournament Bentancur will return to Juve full of confidence and be ready to challenge for a starting spot.

De Arrascaeta will not be one of the most well-known players in Russia this summer. Pehaps only Uruguayans and followers of Brazilian football will know about the attacking midfielder. If he’s given time on the pitch though, people will learn his name and not forget it. De Arrascaeta plays his club football at Cruzeiro in Brazil and he is definitely a player to watch at the World Cup. De Arrascaeta is a skilful playmaker who loves pulling off skills and dribbling his way past players. He’s also a very creative passer, highlighted by his average of 2.6 key passes in Brazil. For Uruguay he will most likely make cameos on either wing and coming inside. In a hard-working and defensive disciplined side his creativity and vision can be key from the bench in tight matches. If he hits his form and gets some game time then many of the viewers will find a new personal favourite in the Uruguayan maverick Giorgan De Arrascaeta.

It will be interesting to watch Uruguay play at the World Cup since they probably have one of their most talented squads ever. The rock-solid defence and deadly attack has been joined by a talented midfield group. It will be great to watch them look to win a third World Cup title. Drawn into a group with Russia, Saudi Arabia and Egypt, you’d back them to go through. Then in a knockout tie Uruguay can give anyone a scare.