World Cup 2018 will be something of a transition point for the Spanish national team moving forward. The core of the side that won the World Cup in 2010 in South Africa and the European Championship in 2008 and 2012 are still present but this may be the last time that we see them on the biggest stage of all. Andres Iniesta, Sergio Busquets, Sergio Ramos and Gerard Pique are still regulars in the first team but time is wearing down and their legs cannot go on forever.

Having struggled and dropped out in the group stage in Brazil four years ago there is a definite sense that this year they are genuine challengers to go all the way to the final. The appointment of former U-21 coach Julen Lopetegui appears to have been a masterstroke from the Spanish federation, having struggled to adapt to club football Lopetegui is ideally placed to create the bridge between the experienced older guard in the squad and the younger players that had performed so well for Lopetegui at U-21 level.

There are still doubts over the quality of strikers that Spain have at their disposal but those same doubts existed in 2008, 2010 and 2012 where the Spaniards swept all before them.

A former international goalkeeper Lopetegui is very much a coaching product of the Spanish Federation. He started his coaching journey at national youth levels and gradually worked his way up to the post of U-21 coach. This culminated in 2013 when the U-21 side won the European Championship playing scintillating football with the likes of Thiago and Alvaro Morata in the side.

This performance won Lopetegui the chance to coach FC Porto of Portugal but unfortunately for the Spaniard his spell in Porto coincided with a period of dominance for their rivals Benfica and he was relieved from his post after just 18 months.

His period in charge of Spain has seen a slight structural shift in the tactical setup of the team moving away from the 4-3-3 Barcelona model in to a more clearly defined 4-2-3-1 with Isco of Real Madrid performing key attacking duties in the middle of the three behind the striker.

With the change from 4-3-3 to 4-2-3-1 there have been slight structural changes from the Spain side that we remember for that successful period from 2008 to 2012. Isco plays in a more advanced central position to link in with the striker and with the likes of Iniesta and Silva who play inside in the half spaces.

This change in structure has a second purpose in recognising that Sergio Busquets is not as mobile as he once was at the base of the midfield, his role will be to organise the midfield from a static central area with Koke likely to be given the second midfield slot where his ability to play in the defensive and attacking phase will offer a balance to the midfield. 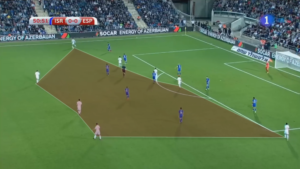 The structure in this match between Israel and Spain was interesting as the Spanish committed eight players in to the final third as they pressed their opponents back. The keys to the structure lie in the two fullbacks, who maintain their wide positions to stretch the width of the fiend, and Busquets who holds a deeper central role and stretches the depth of the attacking structure.

When playing in this manner there are always passing angles and options over. 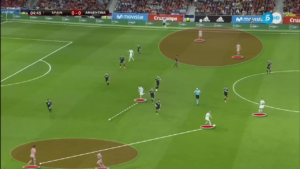 Here I highlighted the relationships that Spain have in the wide areas with the fullbacks and midfielders offering the chance to create immediate overloads in the wide area on either side. The movement and space in the central areas also ensure that the opposition struggle to close down passing lanes centrally and allow Spain to play the ball out in to the wide areas.

This is perhaps the most difficult choice to make when writing these previews, how do you define the importance of a player in this Spanish side? In defence Gerard Pique and Sergio Ramos are key. Sergio Busquets holds the base of the midfield and Andres Iniesta is, well Andres Iniesta.

With that said however under Lopetegui Isco has made himself an integral part of the attacking system with his ability to play in tight spaces in the final third and to resist the press of the opposition.

This has not been a standout season from Isco at club level but to an extent that could be a positive for Spain going in to this tournament has he should be relatively fresh and perhaps looking to prove a point. In the qualifying process for the tournament Isco appeared to come of age in the match away to Italy as he toyed with the Italian defence and provided the pivot around which the Spanish attack flowed.

Look for Isco to play a key role this summer in Russia.

When Mohammed Salah left the field of the Champions League final his place at the World Cup was very much placed in doubt, this has perhaps overshadowed the fact that Dani Carvajal of Real Madrid was also injured later in the match.

It remains unclear whether Carvajal will be fit to take his place on the field in Russia but if he fails to regain his fitness then the World may very quickly become accustomed to the talents of the Real Sociedad fullback Alvaro Odriozola. This season has seen Odriozola perform so well at club level that he has been strongly linked with a move to Real Madrid already to potentially replace the aforementioned Carvajal.

Very much a fullback in the modern style with the ability to overload on the right hand side and perform high up the field in the attacking phase. He is quick and able to recover his position when the opposition try to counter attack. If Odriozola picks up significant minutes in the tournament this summer then expect to see him linked to clubs throughout Europe.

As mentioned previously there are still questions around who the lone striker will be for Spain at the World Cup. There is no doubt about the qualities of Diego Costa or his ability to lead the line but whether he will be fit for the tournament or whether his individual qualities fit the structure and system of Spain is another matter.

That could open the door to one of Rodrigo or Iago Aspas to come in and lead the line. Rodrigo is an intriguing prospect with the Valencia forward being comfortable playing in central areas of moving out wide. With the way that Spain attack in the final third looking to overload the half spaces and play combinations a forward like Rodrigo is capable of linking in to this.

He also carries a goal threat with the ability to find and attack space in the penalty area he could become more and more important as the season progresses.