Morocco are back on the grandest of world stages after a 20-year absence, having last played at the FIFA World Cup in 1998. The Atlas Lions had a stellar qualification campaign, beating Equatorial Guinea 2-1 on aggregate in the second qualification round for CAF, before winning all six games without conceding a goal, to top their group and qualify for the FIFA World Cup 2018. This was despite the presence of African heavyweight Ivory Coast in their group, who failed to qualify for Russia 2018 as a consequence.

However, they were drawn in an extremely tough group alongside Spain, Portugal and Iran, and it would take a stellar performance for Morocco to qualify for the knockout stages.

Herve Renard is something of a legendary figure in African football, as the only person to have won the African Cup of Nations with two different sides; Zambia in 2012 and Ivory Coast in 2015. Renard took charge of the Atlas Lions in February 2016, guiding them to a quarter-final place at the 2017 African Cup of Nations, before sailing through qualification for Russia 2018.

Renard has got his Morocco side playing on the front foot throughout his time in charge; they press high up the field, look to get the ball in wide areas and stretch their opposition. It is debatable whether he will employ this approach against Spain or Portugal, and may well need to rely on a well-drilled defence to have any hope of progressing further in the tournament. He has already made a big call by dropping Soufiane Boufal of Southampton from the squad.

Morocco have predominantly played a 4-3-3 throughout Renard’s tenure, morphing into a 4-2-3-1 at times. Ahmed el Ahmadi functions as the midfield pivot, dropping deep to collect the ball from the centre-backs and shield the defence during transitions, as seen in the image below from their friendly against Serbia, while Mbark Boussoufa and Younes Belhanda take turns to move into attacking midfield. 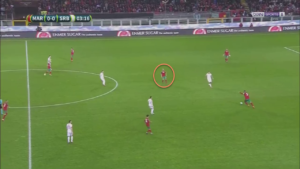 Medhi Benatia and Romain Saiss are the centre-backs; both have the ability to play out from the back, especially given that Saiss plays as a defensive midfielder for his club side, Wolves. This allows them to go direct at times, with the two centre-backs playing long passes into the channels for the forwards.

Morocco also press aggressively high up the pitch, often funneling their opponents towards the touchlines, in order to use it as a ‘natural’ barrier and decrease space for them to play out. In attack, one of the central midfielders usually moves up in support of the lone striker, usually Khalid Boutaib, while the opposite winger also comes in at the back post when the ball is on the flank. 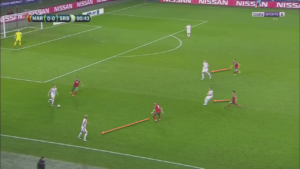 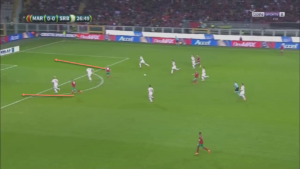 While the likes of Ziyech and Amrabat will look to provide an attacking spark, Benatia will probably be key to their hopes of making it out of an incredibly tough group consisting of Spain, Portugal and Iran. Captain of the side, Benatia’s organization and defensive nous were a major factor in Morocco not conceding a goal in the final phase of African qualification, and those same qualities will arguably be needed even more during the tournament. Alongside Romain Saiss, Benatia will also play a role in Morocco’s attacks, as Renard puts a heavy emphasis on playing out from the back. Expect any success the Atlas Lions have in the tournament to be built on Benatia’s performances.

20-year old Amine Harit has had something of a breakout season at Schalke in the German Bundesliga, winning the Bundesliga Rookie of the Year award, a feat which is even more impressive considering the fact that this was his debut campaign for Die Konigsblauen. The youngster plays as an attacking midfielder, from where his ability to drift past markers with a drop of his shoulder has drawn comparisons to Isco, whom he will come up against in the group stages. He possesses quick feet and an eye for the killer pass, and these qualities will come in handy in a group where scoring goals could be difficult. Harit is unlikely to start for Morocco, but he could make a decisive impact off the bench.

Amrabat should start on the left wing for the Atlas Lions, with Hakim Ziyech on the right. The 31-year old has had a poor season on loan at Leganes from Watford, scoring just once in 27 appearances in the league, but has the ability to change a game if on form. The biggest criticism of Amrabat throughout his career has been his inconsistency; capable of both the sublime and the infuriating, sometimes within the space of a few minutes, he has nevertheless managed to hold onto a place in the Moroccan starting XI. Renard seems to value his experience and potential game-changing ability, and Amrabat would be looking to repay that faith with at least some consistency at the very least during the World Cup.

If you liked this, check out our previews for Morocco’s Group B opponents Spain and Portugal