Out of all of the European sides that have qualified for the World Cup this summer in Russia it may be Denmark who have the widest spectrum of expected performance. On one hand you would not be terribly surprised to see them fail to qualify from the group stage whilst on the other if they were to reach the quarter-final stage then it would be no great shock. Indeed with the exception of perhaps Argentina and Lionel Messi Denmark are perhaps the side at the World Cup who rely most on an individual player igniting and playing at the top of his game, that player? Christian Eriksen.

The Tottenham playmaker is in his age 26 season and is about to enter his peak years. Given a great deal of creative freedom in terms of his positioning on the field and his use of the ball the Danish public will be on the edge of their seats whenever their talisman has the ball at his feet.

Other than the cerebral Eriksen the rest of the Danish squad is a mix of pace and power that should serve them well as they look to play in the transition more than they look to hold possession of the ball for prolonged periods of time. They attack quickly when winning the ball back with the pace of Pione Sisto on the left-hand side of the field in particular extremely helpful in stretching the opposition defensive structure.

Hareide has been in charge of the Danish national team since 2016, a coach with extensive experience coaching in Scandinavia with spells in Norway, Sweden and Denmark although he has never coached outwith the region.

The Norwegian is a pragmatic coach who prefers a defence first option although he has been marry this approach with getting the best out of Eriksen in the attacking phase. Hareide does, however, understand the Scandinavian mentality extremely well and this stands him in good stead to get the best out of his team as an organised defensive unit.

There is a concern over the lack of goals that the strikers in the squad have scored for their club sides this season. The RB Leipzig forward Yussuf Poulsen is likely to start from a wide position before moving centrally to support the Feyenoord forward Nicolai Jorgensen. 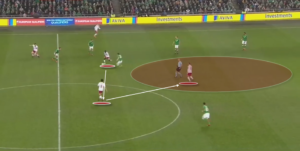 In the qualification playoff to qualify for the World Cup Christian Eriksen was the difference maker that carried the Danes through into the tournament. Here you can see an example of the spaces that he takes up on the edge of the final third. With the opponents looking to press and force the ball backwards Eriksen will simply read the spaces on the field and drift into where he can cause maximum damage.

His role in drifting into space forces the opponents to make a decision in terms of marking him directly and leaving them short elsewhere or letting him drift and hoping that the defensive structure as a whole will shut down the zones of space. 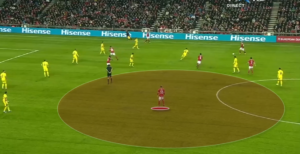 In this match against Romania, we again see that Eriksen has moved away from the ball in the wide area in order to maximize the space that he has to play in should he receive the ball. As soon as the ball is shifted across Eriksen has space to drive forward negating the midfield line and making the defensive line move out to close down the space. This, in turn, creates space elsewhere for his teammates.

This time not only do we see the Eriksen again finding a pocket of space between two opponents but we also see the linking into the centre of Yussuf Poulsen who has moved in from the right-hand side to link with the lone striker Jorgensen.

A quick pass into this zone of the field will give Denmark an opportunity to quickly overload against an isolated opposition defender.

It will come as no surprise that I have selected the Tottenham man as the squads key player. His importance in a playing sense is matched by his leadership status within the squad and he will be the player that the rest of the squad look to in order to lead by example.

Playing from the right-hand side of the centre of midfield Eriksen will be given a free role to attack and drift into pockets of space in the opposition final third. His ability to link play as well as his threat from distance will be key for the Danes in breaking down their opponents.

Eriksen also poses a significant threat from set pieces with his ability to deliver free kicks and corners at pace and with swerve offering an extra dimension for the big physical Danish defenders to attack from deep.

This was a difficult decision with the left winger Pione Sisto also worth consideration for his attacking influence on the squad. Christensen though has the potential to develop into a top-class central defender and he will partner the experienced Simon Kjaer for the tournament.

Signed at a young age by Chelsea his development was hugely aided by a two-year spell on loan at the German side Borussia Monchengladbach. On returning to Chelsea he has become a key part of their defensive structure with his pace and strength complimenting his ability to read the danger and move accordingly.

Christensen is also a key part of the Danes attacking transition with his ability to get on the ball and play out of defence.

The Werder Bremen midfielder has already been linked heavily to a move from the Bundesliga this season with England his most likely destination. A strong showing in this tournament could intensify interest in his services and drive the price up.

A central midfielder Delaney provides balance to the midfield with Eriksen given a free role Delaney is more structured although he is comfortable in joining with the attacking or with the defensive phases of play.