Iran as a national team has long been neglected by the international community despite their past and recent successes. Russia 2018 will be their fifth World Cup appearance, but Team Melli has yet to advance to the knockout rounds in their history. Portuguese head coach Carlos Queiroz has been at the helm since 2011 and has seen the squad begin to take shape, preparing for the opportunity at a tournament just like this.

There is no denying that the FIFA World Cup 2018 will pose some issues for the Iranian squad. Queiroz’s side have a vast gulf in quality between themselves and two group stage foes, Spain and Portugal. Even Morocco is tipped as the third-best squad in Group B, leaving Iran as long-shots to advance to the knockout stages. Therefore, the Asian superpower must vary their approach in Russia as opposed to their usual dominance against the likes of Syria and Uzbekistan.

As a quick overview, Iran prefer to set up in what we recognise as a 4-1-4-1. Obviously, the positions morph and move throughout the 90 minutes of a match, but the solidity and pragmatic style of Quieroz’s men makes it a relatively homogeneous formation across matches.

When on the ball, Iran rarely take their time. Their build-up play is much more akin to the likes of Liverpool, not Napoli or Manchester City. From the get-go, Iran’s goalkeeper attempts a lot of long throws and long passes. The defenders opt for a more direct approach as well; the centre-halves will kick the ball long towards the solitary forward or, if the pass is safe, to the near-sided full-back. The full-backs will look to send a ball over the top for a winger. Rarely will you see Iran enjoy sustained periods of possession, especially against a side like Spain or Portugal.

Defensively, Iran maintain a similarly pragmatic and conservative style. While the Persian Stars can be found pressing intensely in small stints, they usually line up with two banks of four, flanked by a defensive midfielder and striker. What this means is that the defensive line and midfield line – consisting of two central midfielders and two wingers – remain structured, while the defensive midfielder holds tight to the back line and the striker roams around. Sardar Azmoun, Iran’s brilliant young striker, is often the only player putting any real pressure on the opposition’s build-up.

This approach is sound defensively and dangerous going forward. In the Asian qualification process for Russia 2018, Carlos Queiroz’s tactics allowed Iran to roll over less talented teams like India, Qatar, and China while remaining solid against the likes of Syria and South Korea. Iran remained undefeated throughout the entire AFC qualification trial, but they won’t be truly put to the test until they walk onto the pitch in St. Petersburg.

As previously mentioned, Iran aren’t a free-flowing, possession-based team. Their approach leads to goals scored from defensive errors and crosses. Their star man is Alireza Jahanbakhsh, a 24-year-old winger from AZ Alkmaar in the Dutch Eredivisie. Alireza led the league in goals last season, scoring 21, while tallying 12 assists as well. His mix of strength, pace, and technique make him an extremely dangerous asset for the Princes of Persia – certainly a player that opponents shouldn’t take lightly.

Alireza plays out wide on the right, but perhaps the most impactful player (on the scoresheet, at least) will be the aforementioned Sardar Azmoun. Plying his trade at Russian club Rubin Kazan, Azmoun has an immense jumping reach and a knack for getting goals. Whether it’s by virtue of a ball over the top, a cross from Alireza, or a through ball he latches onto, Azmoun can score in a variety of ways.

It’s more than likely that Azmoun and Alireza will fail to hold much of the ball, mostly due to Quieroz’s conservative tactics in possession. That being said, if the opposition lays off Team Melli, they are more than fine with playing out of defence. As seen below, the left centre-back is in possession and has many options. Not only can he dribble into space, since the South Koreans are playing a man-marking system, but he can also pass easily to a centre-mid or full-back.

Note especially the position of Iran’s #6 in the middle of the pitch; Saeid Ezatolahi’s role as defensive midfielder is limited but keeps the team safe from dangerous counter-attacks.

In another instance, Alireza Jahanbakhsh receives a pass from Ezatolahi in the right half-space. Since he’s tucked inside, Iran’s right-back has space to overlap. Alireza plays a nice one-touch pass, allowing Ramin Rezaiaen the adequate space to cross to Azmoun, whose first-time finish leaves the Korean defence stunned and puts Iran in the lead. After crossing the halfway line, it only took two passes for Iran to score. Direct plays like these won’t come easy at Russia 2018, but there will be opportunities for the likes of Alireza to exploit. 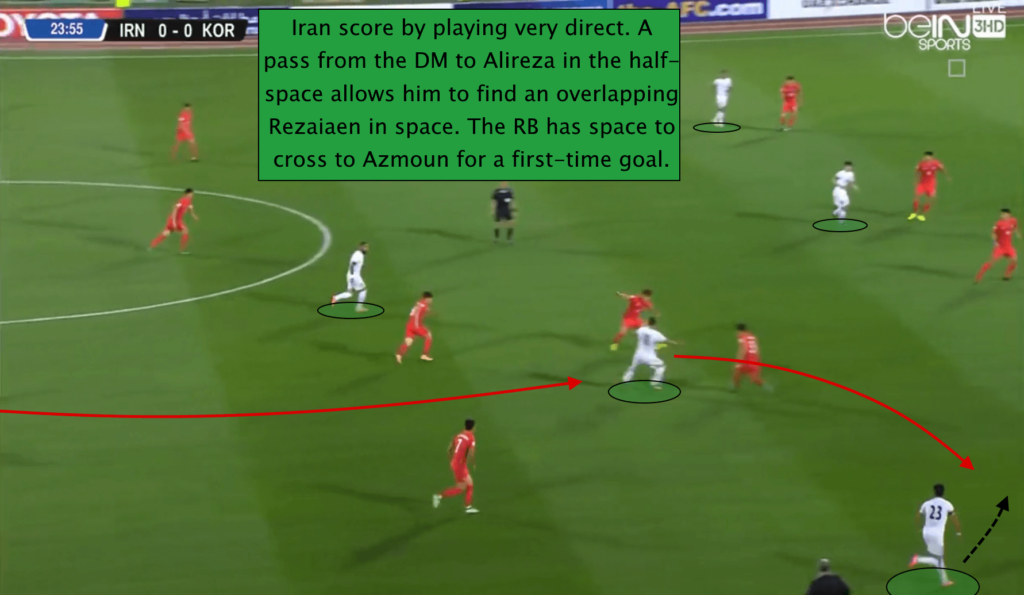 Unfortunately for Iran, they probably won’t come up against a side that lets them dribble into the midfield or pass easily into the half-space, like the instances above. Iran may need to rely on long balls from defence to attack, completely bypassing the midfield altogether. However, they seem to be adept at winning the second ball. This means that the long passes don’t need to connect in order to succeed; a long ball that forces a defender to head it away may fall at the feet of an Iranian player, who is now better positioned to make an attacking move. 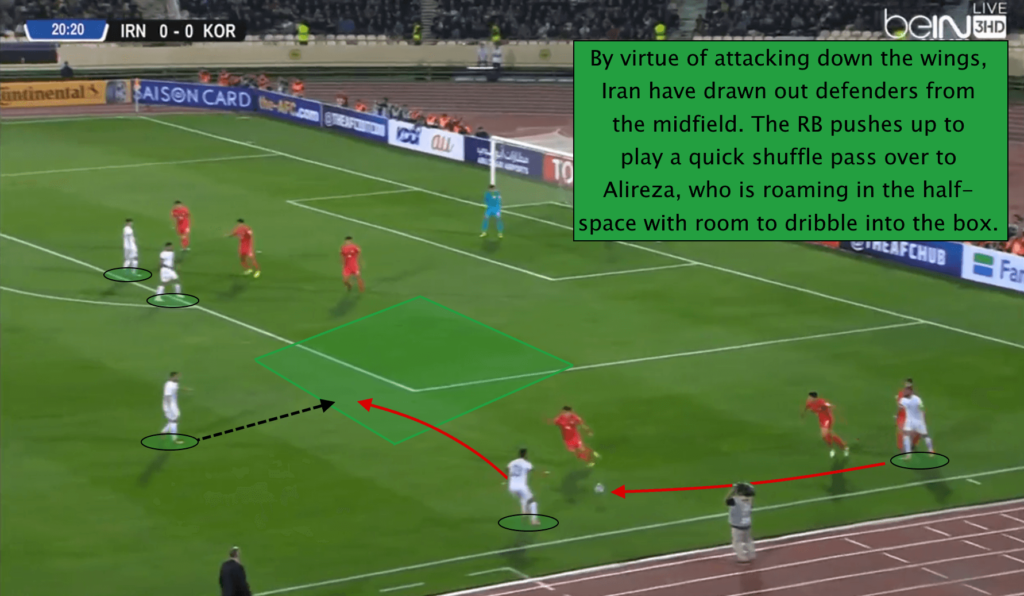 The shot above represents just how important Alireza is to Team Melli. The Iranians draw out defenders very wide, opening up an opportunity to quickly switch the play to Alireza in the right half-space. There, the Dutch-based winger can dribble into the box before taking a crack at goal or crossing for a teammate. You may find Iran’s right-back risking it all to add a link between the midfield and Alireza high up the pitch.

Iran’s pragmatic attacking translates seemlessly to its defensive setup. First things first, when the opposition builds up from defence, Iran are not usually overzealous in their pressing. Below, Azmoun is the only player putting any pressure on the centre-backs on the ball. 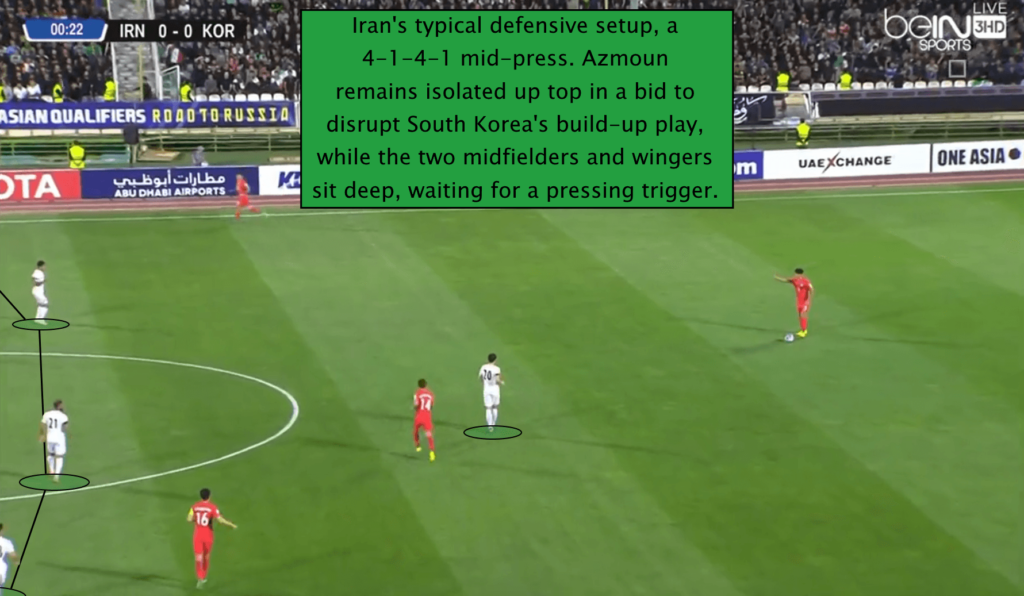 However, once the ball is taken wide, the deep-lying wingers are triggered to close down quickly. The same applies to an opponent receiving a pass in the half-space; one of the central midfielders will close down quickly to mitigate the threat. Azmoun’s movement – represented nicely above – usually doesn’t allow an easy pass to a midfielder in the center of the pitch. 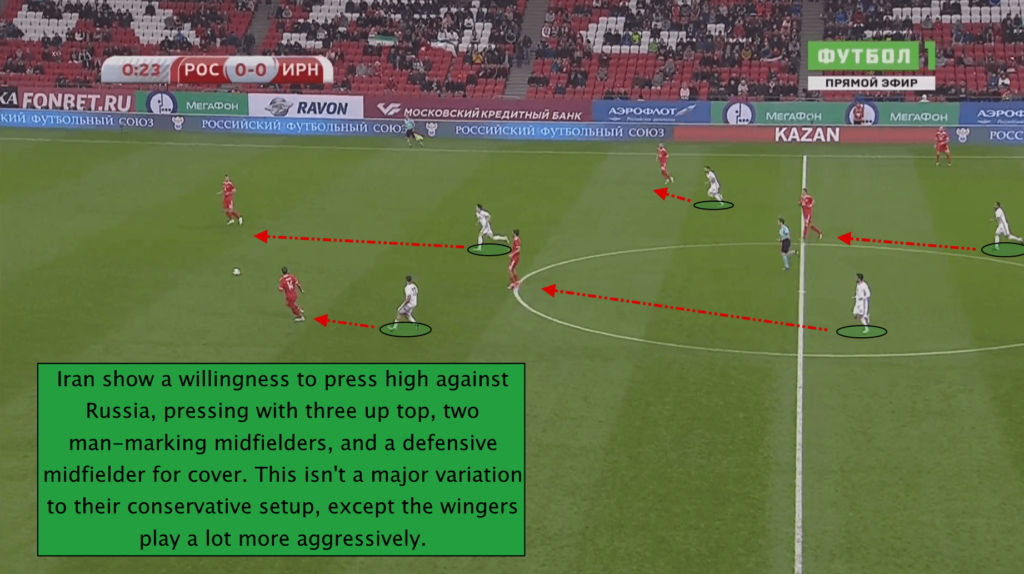 Iran have showed in the past that they are comfortable pressing high, though. In a match against Russia, Quieroz’s squad sprinted after the ball from the get-go. The three attackers matched up man-for-man, with Azmoun tracking the backwards pass. The two central midfielders matched up with Russia’s central players, while the defensive midfielder played conservatively once again. 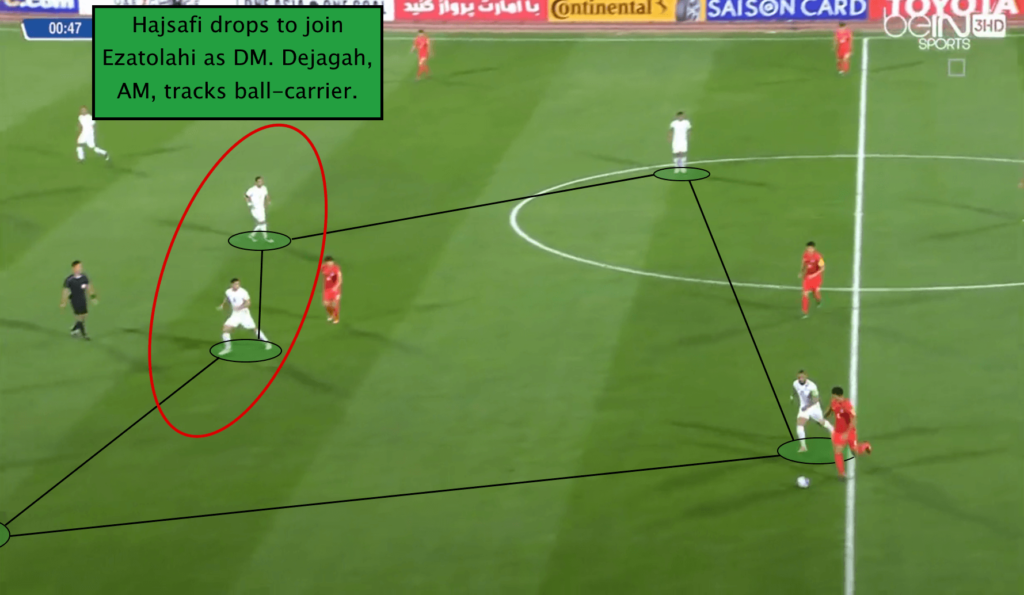 Once the ball passes the halfway line, Iran develop a similar approach to their mid-pressing game. One of the two centre-mids will track the ball if it’s in the middle of the pitch while the other midfielder drops deep to join the defensive midfielder. The wingers will remain in a similar position, remaining mobile enough to track back and block opposing efforts to pass down the flanks. 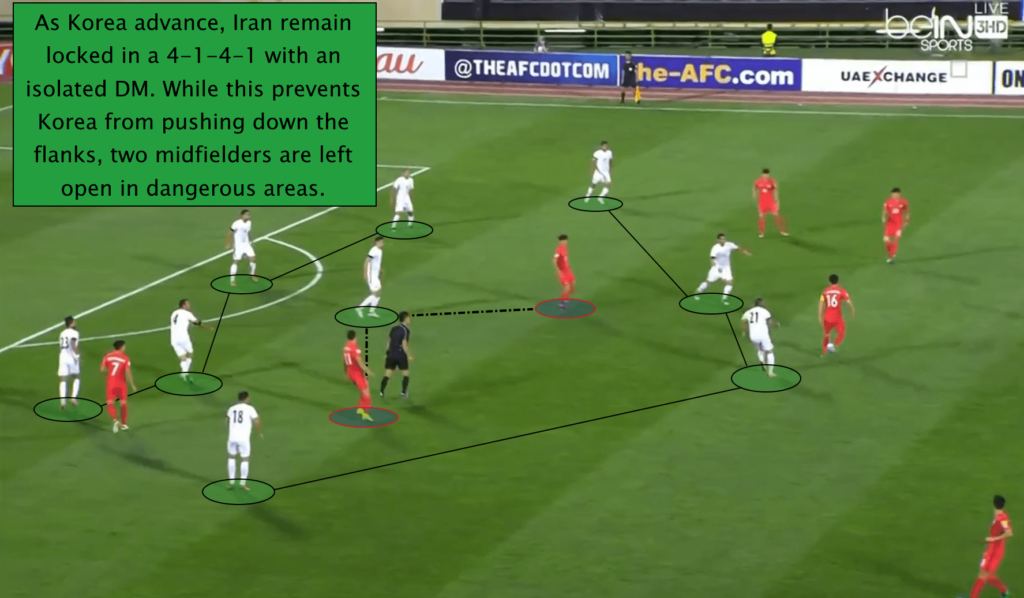 Finally, this is how Iran will likely set up in a deep block. Once Korea advanced into the final third, Iran kept a similar formation as before (just much tighter). The centre-mid who sat back in a double-pivot steps out to close down the space in the midfield, while the defensive midfielder remains tight to the back line. Perhaps the most noticeable element of this screenshot are the wingers: they remain wide, forcing the play inside and acting as pseudo-full-backs.

The issue with this setup is highlighted above. Korea have two attackers positioned in loads of space between Iran’s second and third defensive lines. The defensive midfielder, therefore, is tasked with marking two players if a quick pass is played inside. You can bet that Portugal and (especially) Spain will exploit this space.

Listed below is Iran’s 23-man squad that will travel to the FIFA World Cup 2018. The squad’s key players, emboldened, will play a key role in Iran’s success or failure at Russia 2018.

How do you think Iran will do at the FIFA World Cup 2018? Will the skill of Alireza and Azmoun force a few group stage upsets, or will Iran’s defensive vulnerability spell their demise?