For the Euro 2016 champions nostalgia will not win them the trophy and Portugal manager Fernando Santos shows no signs of this, dropping Euro 2016 winners Nani (Lazio), Andre Gomes (Barcelona) and Renato Sanches (Bayern Munich) and extra-time winning goal scorer Eder (on loan at Lokomotiv Moscow from Lille).

One constant remains and that is captain and talisman Cristiano Ronaldo who has moved into a more central role for club and country and registered 15 goals and 3 assists during qualifying that was only bettered in Europe by Robert Lewandowski who scored 16 goals and registered 1 assist. Topping their qualifying group scoring 32 and conceding 4 shows that there is still life in the reigning European Champions.

The portrayal of Portugal being a one-man team is misguided and Andre Silva (AC Milan) provides more than enough attacking threat with 9 goals and 1 assist in qualifying but his lack of playing time in Serie A could be a cause for concern. Looking at the midfield a combination of Bruno Fernandes (Sporting Lisbon), Gelson Martins (Sporting Lisbon), Bernando Silva (Manchester City) and Goncalo Guedes (Valencia) will provide width and creativity being anchored by one of Joao Moutinho (AS Monaco) Adrien Silva (Leicester City) and William Carvalho (Sporting Lisbon)

Defensively Portugal is replacing Italy with relying on experienced defenders such as Jose Fonte (Dalian Yifang), Pepe (Besiktas) and Bruno Alves (Rangers) all of whom could come under pressure in Portugal’s opening game against a tricky, quick Spanish side. Rui Patricio (Sporting Lisbon) has established himself as the number one keeper for the tournament with Anthony Lopes (Lyon) providing competition. The full squad can be seen below. 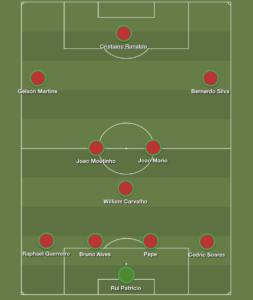 Portugal are likely to line up in a 4-4-2 or 4-3-3 as they go into the World Cup with Rui Patricio in goal being protected by an experienced back four of Cedric, Pepe, Bruno Alves or Jose Fonte and the young Borussia Dortmund left-back Raphael Guerreiro. In midfield, it is likely that William Carvalho will protect the back four with Joao Moutinho and Joao Mario supporting a front three of Bernardo Silva, Cristiano Ronaldo and Andre Silva.

However, the domestic form of Gelson Martins and Bruno Fernandes could yet force them into the starting line up as both Andre Silva and Bernardo Silva struggle for game time abroad. If Euro 2016 and World Cup qualifying is anything to go by Portugal will not play at a high intensity and will patiently wait for opportunities in the hope that their talisman (Cristiano Ronaldo) can deliver.

Portugal are all about one man and also with it being his last World Cup Cristiano Ronaldo is definitely the player to watch. Having been robbed of a European Championship final through injury, Cristiano Ronaldo will be completely focused on dominating the world stage. He was the second top goal scorer in European qualifying with 15 goals and also tops the Uefa Champions League goal scoring this season with 15 goals. Many thought that he had begun to slow down and not impact games as he did in his prime but he has played a key factor in Real Madrid’s route to the final and he will want to continue that with Portugal at the World Cup this summer.

In an experienced team young players are hard to come by but Bernardo Silva has shown glimpses of brilliance throughout the Premier League campaign and despite starting only 15 games registered 6 goals and 4 assists. With limited opportunities at Manchester City Bernardo Silva will have a point to prove on the world stage after lighting up the Champions League the previous season where he was the key man in AS Monaco’s route to the semi-final. However, with only 2 goals for Portugal there is a lot left to be proven by Bernardo Silva and could he provide the creative spark to fuel Cristiano Ronaldo’s goal machine.

Ricardo Quaresma was once billed in the same category as Cristiano Ronaldo but their careers have taken different paths albeit Quaresma has still played for European giants Chelsea, Barcelona and Inter Milan. His story is one of unfulfilled promise (if you can say that about a European Championship winner) but he will be determined to go out on the world stage with one last hurrah. He will be competing for a place for Bernardo Silva and although I have highlighted him as a young player to watch his worrying lack of goals could open up an opportunity for Quaresma to show his qualities. A dynamic, technical and quick winger he could provide the key to unlock defences and his story could be one of a super sub that may cement his name in history.