FIFA World Cup 2018: Why Uruguay will beat France (and why they won’t)

After defeating Cristiano Ronaldo’s Portugal in the 2018 FIFA World Cup Round of 16, Óscar Tabárez’s Uruguay have been drawn against a strong France side. Kylian Mbappé terrorised Argentina in the last round as France won 4-3, ending Lionel Messi’s World Cup hopes. With Edinson Cavani likely to miss out through injury, Tabárez will need to tweak his trusted 4-4-2 formation on Friday.

However, even without the talisman, Uruguay have the potential to upset France and make the Semi-Finals. We will cover what exactly makes La Celeste a threat to Les Bleus, and vice-versa, through a tactical lens.

Firstly, why will Uruguay shock the world and defeat France?

Before Pepe headed in Portugal’s equalising goal, Uruguay had yet to concede in Russia. Even so, the goal came from a corner. This is a testament to the squad’s extremely strong open-play defending. Uruguay’s tendency to not overexpose themselves helps, but this is mostly down to great organisation.

France have proven to be a much less pragmatic team than Uruguay this summer. With a front-line of Olivier Giroud, Antoine Griezmann, and the aforementioned Mbappé, they are a serious attacking threat. Yet, against compact sides like Australia and Denmark, Didier Deschamps has seen his side struggle. 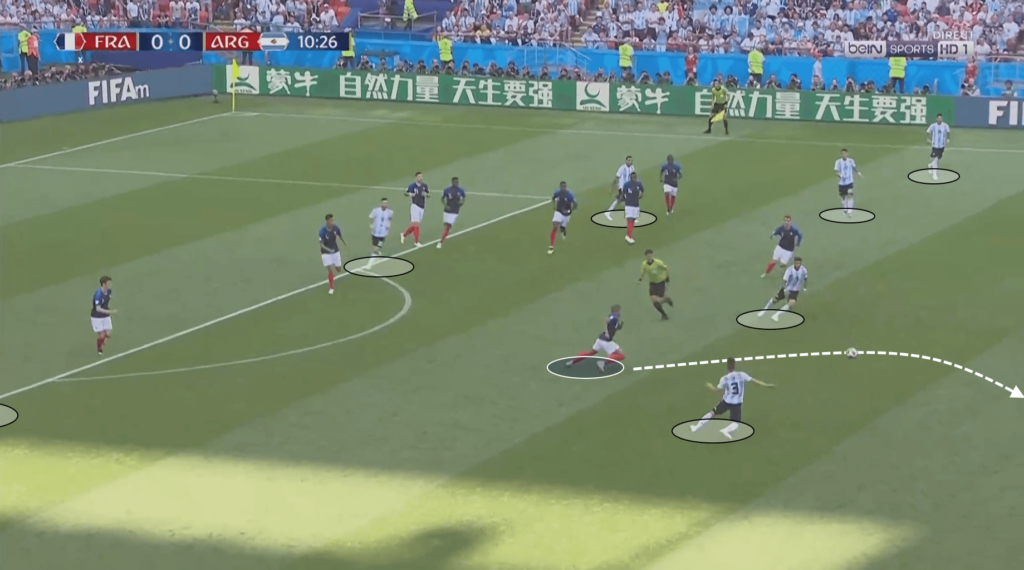 As shown by their four-goal return, France were much better positioned to score against Argentina. Because of their possession-style passing, Argentina tried to create as many overloads in the final third as possible. While this was often effective, they were easily caught out on the break. Above, Mbappé intercepts a pass and already has seven Argentines in his rear-view. The teenager had no problem closing in on goal with only three defenders covering an entire pitch.

Uruguay are much more prepared to defend these brisk attacks. Their first goal against Portugal — drawn by David Selini — came from a Luis Suárez cross; only five bodies were needed in the final third. While this sometimes leads to a lack of possession in the opponent’s half, this pragmatic style prevents any sudden counter-attack. 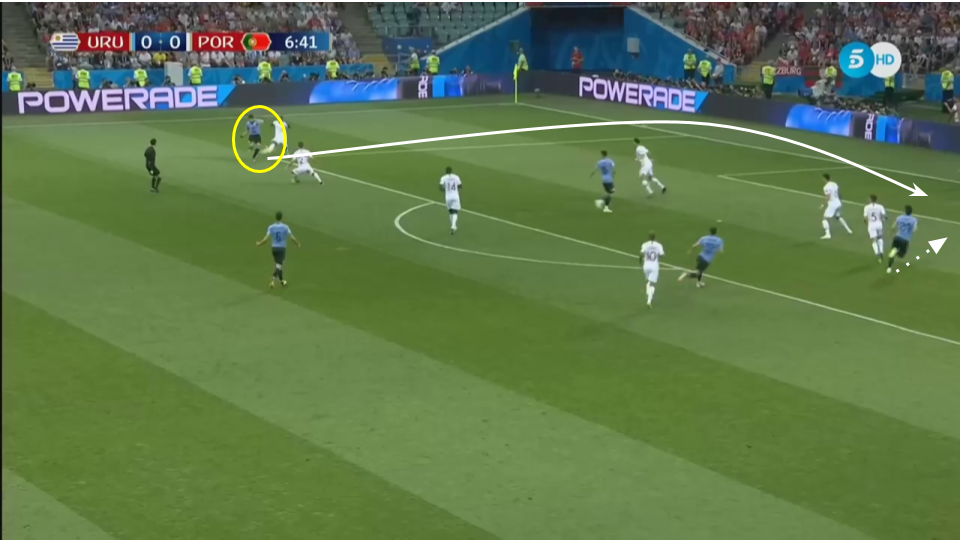 Diego Godín and José Giménez make up a formidable back two, while Martín Cáceres and Diego Laxalt provide both passing width and defensive unity. Cáceres will often traverse forward from right-back, as seen above, but Uruguay maintain defensive cover. Lucas Torreira has been a revelation in midfield, with his calming presence in front of the back-line.

Don’t take it from me! Take it from the three goals conceded to Argentina. All sarcasm aside, Lionel Messi and company went about their chance creation a lot differently than their South American rivals. Uruguay are much more direct. Saudi Arabia out-possessed them in the group stage while Portugal maintained the ball for over two-thirds of the match.

But this is no weakness; this is a deliberate attempt by Uruguay to play to their own strengths. And it is this very strength that could be France’s downfall. 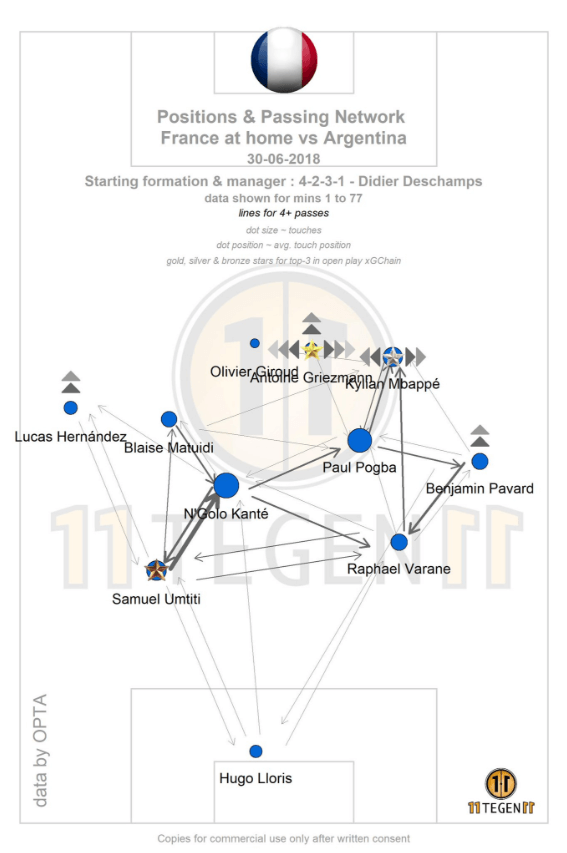 France’s passing network against Argentina, provided by the brilliant @11tegen11 using Opta data, seems to portray an organised attacking unit. N’Golo Kanté and Paul Pogba are used to transition from defence to attack while Griezmann and Mbappé dispatch chances into the goal.

However, two things become apparent when taking a closer look. One, Blaise Matuidi’s position as left-winger adds defensive structure to France’s counter-pressing efforts. But Matuidi is suspended for today’s match, likely to be replaced by more natural winger Ousmané Dembélé. Not only does this have the potential to destabilise France’s midfield, but it could also offer an easier route to goal for the Uruguayans. 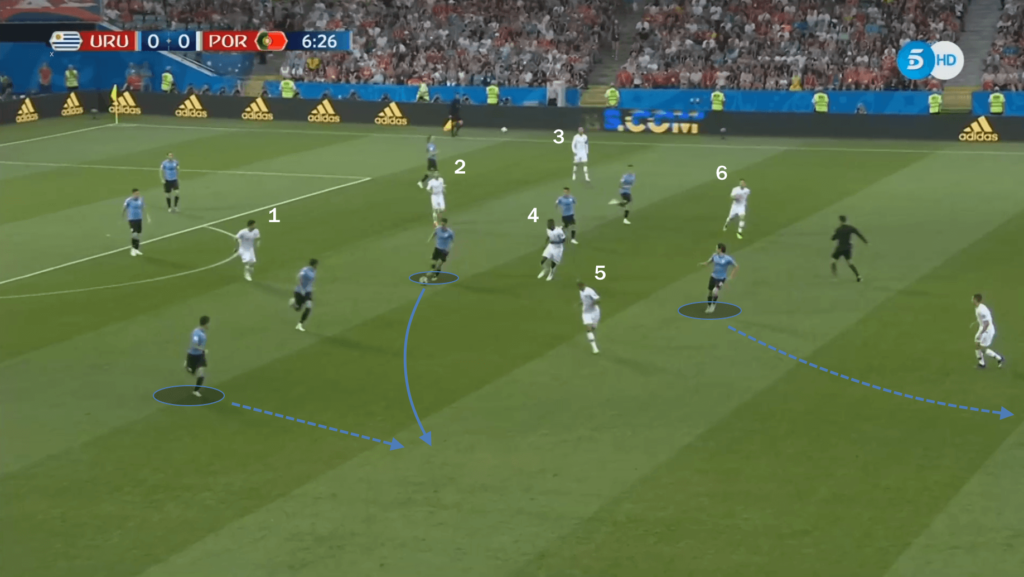 It doesn’t take long for Uruguay to transition from defence to attack. The opposition may thrive in the middle of the park, but once they get to the final third they quickly find themselves out of passing options. Portugal, for example, compensated for this lack of opportunities by driving bodies forward. The problem is that once Uruguay win the ball, they’ve already beaten two lines of defence with one simple pass.

This could become an issue for France, who like to push players forward. 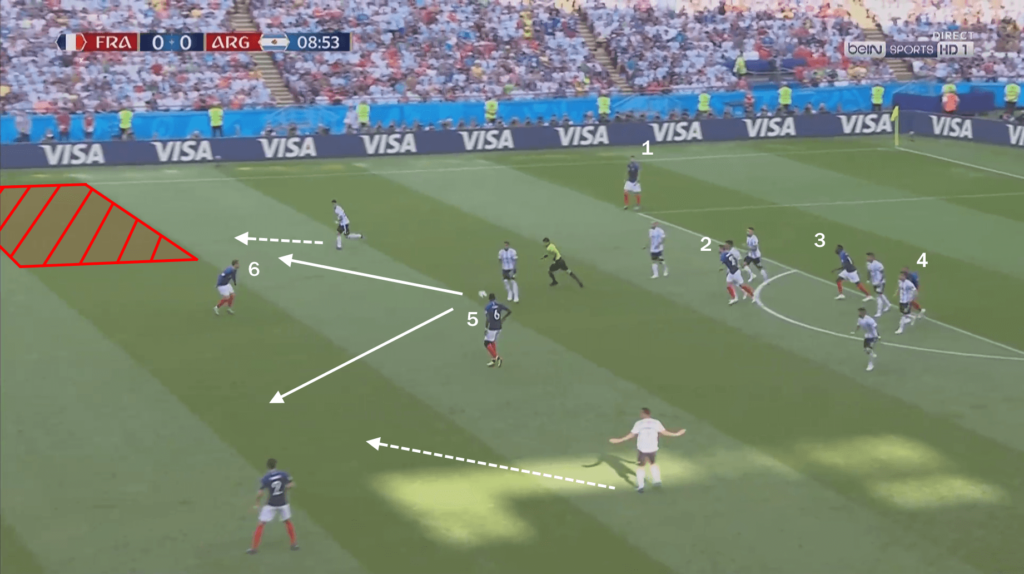 Here, we see a similar scenario to the previous Uruguay counter-attack. France lose the ball in their final third having committed three attackers and a full-back forward. Pogba (5) and Griezmann (6) can be easily beaten with a simple pass, leaving only three defenders and Kanté back. Time and time again, the likes of Cavani and Suárez have taken advantage of these situations.

However, France can potentially exploit one major Uruguay’s weakness.

Edinson Cavani went off injured near the end of last week’s match. Now, it seems the PSG forward will have to watch the Quarter-Final match from the sidelines. Tabárez doesn’t have another attacker who can make an impact as great as Cavani’s, so he must improvise.

Uruguay played with one striker during a few friendlies last year, often using a 4-5-1 or 4-2-3-1 base formation. If Tabárez opts to forgo a two-striker formation — probably with Suárez and Cristhian Stuani — then his side must adapt on the pitch.

As explained by Farkhunda Jabeen, Edinson Cavani’s movement between the lines is crucial to Uruguay’s play. He and Suárez play fluidly up top, finding space and looking for balls in behind. In addition, Cavani’s scoring prowess will be missed as well.

If I had to guess, I predict that Tabárez will play a conservative 4-5-1 formation to start. Lucas Torreira can act as the midfield anchor while Rodrigo Bentancur and Matías Vecino make up a balanced midfield. Nahitan Nández has played well out on the right side of midfield and would add yet another strong defensive presence to the flanks. On the left, Giorgian De Arrascaeta can offer a dynamic playmaking force out wide.

Uruguay are at a disadvantage without Cavani no matter what lineup is chosen, both in terms of striking power and tactical cohesiveness.

To many, an Uruguayan victory would be seen as a massive upset. Yet, having followed this team throughout the tournament, I can say with confidence that La Celeste are well-positioned to sneak through to the next round. Cavani will be a big miss, but France’s eagerness going forward may prove to be exactly what Uruguay need.