Out of all the sides left in the World Cup at the quarter-final stage, Belgium are perhaps the ones with the most to prove to the watching world. They were incredibly fortunate to come through their round of 16 match against an impressive Japanese side but in all honesty, the most important thing is that they found a way to win.

Now against Brazil, we will see Belgium face their toughest test yet in the tournament although if the Belgians can come through this match then they will feel that they have a real chance of winning their first World Cup.

With that said, however, there is a significant difference between talking about beating a team like Brazil and actually doing it on the pitch. Here we will look at the various tactical battles that Roberto Martinez and his Belgian side will have to win in order to progress to the semi-finals.

Throughout the tournament Roberto Martinez has chosen to stick with his favoured variant of 3-4-3 with the Manchester City midfielder Kevin De Bruyne fulfilling a deeper role as part of a two-man central midfield as opposed to the more attacking role that he has at club level with a player like Fernandinho sitting and offering a sense of security as De Bruyne moves forward.

Playing in the 3-4-3 at the World Cup we have seen De Bruyne struggle at times to fully settle into playing as part of a double pivot with Axel Witsel. This will be particularly evident against Brazil where the Belgian double pivot will be outmatched against the three-man Brazilian midfield. 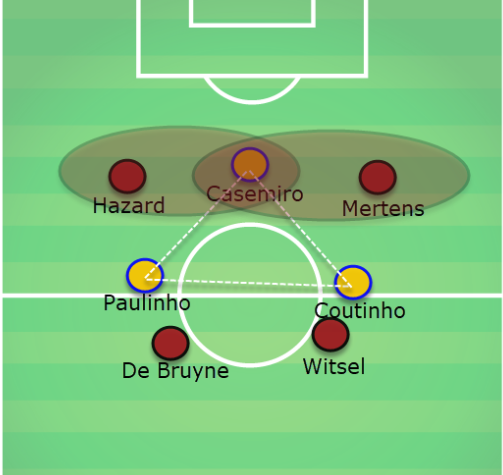 For Brazil, Paulinho, Coutinho and Casemiro all have specific roles within the tactical system that Tite has put in place during his tenure as national team coach. Casemiro is possibly the most perfect example of a modern ‘6’ or controlling midfielder. His role at his club Real Madrid is almost identical to what we have seen this summer. He controls the game from the deeper area and is superb at identifying danger.

Looking at the midfield battle as a 3v2 in Brazil’s favour we would expect to see Casemiro flourish as the free man at the base of the midfield. Here is where Belgium will have to look disrupt the build-up from the Brazilians at the source.

Eden Hazard and Dries Mertens have the capacity to disrupt Casemiro. They are playing as attacking midfielders and they will move in to wide areas in the attacking phase, when defending, however, they will have to tighten up centrally and it is here that they will be able ‘sit’ on Casemiro and provide the balance that Belgium will need in order to gain a foothold in that match.

Brazil will overload their left side

In Neymar and Marcelo, Brazil have without a doubt the most naturally talented and effective left flanks. There are definite questions around the defensive aspects of Marcelo’s game but in the attacking phase, his ability to manipulate the ball in tight areas and his ability to combine with his teammates set him aside as an elite player in the World game.

Belgium, however, will also have to contend with the magnificent Coutinho moving across into the left-sided half space to combine with Marcelo and Neymar in the attacking phase.

This is even more of a potential weak point for Belgium given that their tactical structure will isolate Thomas Meunier in the right wing back role against two if not three superb attacking players. 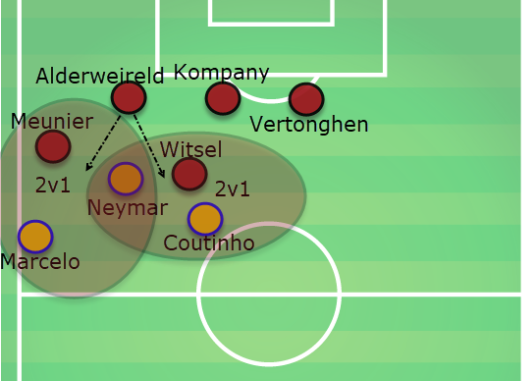 With Neymar as the pivot player, we see that Brazil have the capacity to build 2v1 overloads in two key areas of the field in their attacking phase. This is where Belgium will have to decide how they are going to assign their defensive pieces in order to support the overloaded player to prevent Brazil from attacking comfortably.

Axel Witsel will be prevented from covering over by the orientation of the Brazil midfield and Meunier himself will be unable to support centrally as that would leave the left flank for Brazil clear. Instead, we should see Belgium allow one of their three central defenders to step out and provide the balance to prevent Brazil from breaking through.

With Brazil likely to start with only one fixed central striker in either Roberto Firmino or Gabriel Jesus and as such one of the three central defenders for Belgium will be free to step out. I would expect to see Toby Alderweireld assigned to step out and support in these areas.

Belgium need to be positive

Momentum will be key if Belgium are to come through this tie and they need to be positive in the attacking phase in order to push Brazil back into their defensive shape.

In Romelu Lukaku, Belgium have a forward who is capable of occupying the attention of both of Brazil’s central defenders. Lukaku will look to maintain a high position in order to pin Thiago Silva and Miranda back, this will, in turn, allow the other attacking pieces for Belgium to play in more space and on a higher line. 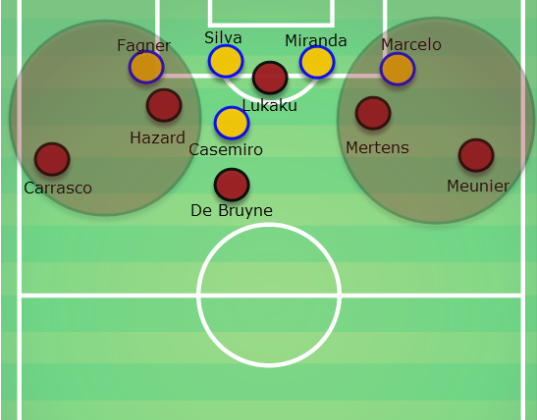 With both Eden Hazard and Dries Mertens being given freedom to move across the width of their half of the field, Belgium have the capacity to create their own overloads in the attacking phase. In controlled phases of possession and in an established attacking phase we will see both wing backs for Belgium take a position high up the field. It is here that there are opportunities to create weak points in the Brazilian defensive structure and to break through into the penalty area.

The beauty of football is that it is so subjective. It is easy to look at the game in black and white but in truth, during the 90 minutes, there are a lot of variables that can create unseen moments. This is especially true in the goldfish bowl of the World Cup with matches coming thick and fast.

Belgium have the chance to make history and firmly take advantage of their ‘golden generation’ with a positive performance and more importantly a positive result in this match.

Can they take advantage of that chance? I think that they can.

Take a look at the match analysis we have done on Belgium Vs Panama, Belgium Vs Tunisia and Belgium Vs Japan. 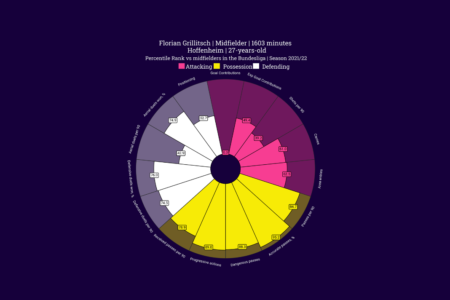