Reputation means very little to Russia in the 2018 World Cup, just ask Spain, and although Croatia come into this match favourites in many peoples eyes the main task facing them is finding a way to break down the Russian defensive structure.

In the round of 16, the Russian strategy was evident from the outset as they set up in a deep and compact 5-4-1 seeking to deny Spain and space to play in and around the penalty area. It was here that Spain failed as they were content to hold possession outwith that defensive block assuming that it was only a matter of time before they found a way through. It was not.

Now the same challenge will await Croatia in this quarterfinal match, how can they find a way to penetrate the stubborn defensive block of Russia? In this article, we will consider three key tactical points that Croatia may well concentrate on to secure themselves a place in the semi-final.

Croatia must stretch the width of the pitch

It is imperative for Croatia going into this match that they prevent the Russian’s from sitting in their compact block comfortably. One of the key ways to achieve this will be to ensure that they stretch out the width of the pitch and force the Russian fullbacks out to defend in wide areas.

In Ivan Perisic on the left-hand side and Ante Rebic on the right-hand side Croatia have two wide players who have not only the technical qualities but also the pace and power to cause Russia real problems in wide areas. It is here that Croatia could well force a way through. 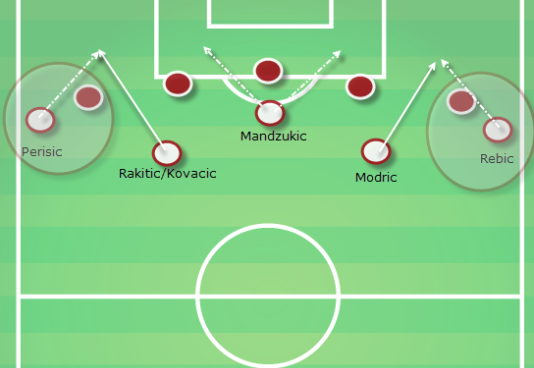 It is here that the quality of the Croatian midfield comes in to play with the likes of Luka Modric and Ivan Rakitic, or Mateo Kovacic if he plays, Croatia have the quality from the midfield areas to either pass through these isolated spaces or to run with the ball and take full advantage of the spaces created.

Croatia will control the game in the centre

With Russia most likely looking to utilise a back five in this match there are always going to be numerical sacrifices elsewhere for the hosts and it is here that Croatia should look to take full advantage.

With five central defenders, it is likely that Russia will play with four across the midfield, this is an understandable decision and the four midfielders will look to form a compact block with the defence. It is here however that Croatia will look to fully control the tempo and direction of the match as their midfield three has far greater depth than their Russian counterparts.

With just two central midfielders the Russian’s will look to match up on the two Croatian 8’s in the centre of the field in an attempt to limit their creativity. This though will leave the free man in the Croatian midfield with the ability to control the game from his slightly deeper areas. 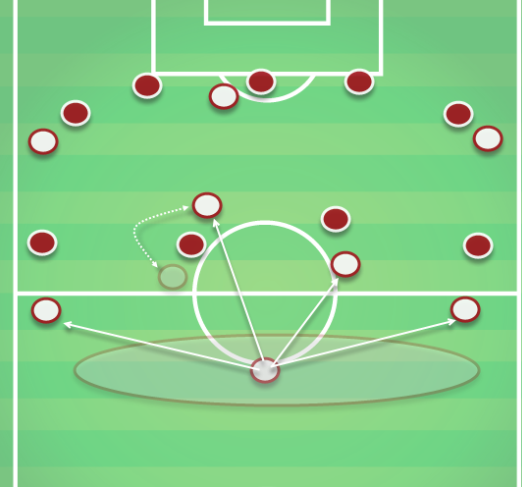 Here you can see the shape and the options that will be open to the controlling midfielder for Croatia. In this match, I would like to see the Croatians be brave and go with the Real Madrid midfielder Mateo Kovacic from the start with Ivan Rakitic dropping back to play the deeper ‘6’ this would give the Barcelona midfielder the time and space to control the game.

From this position, the Croatian playmaker will have three options with which to bypass the Russian midfield block. The first priority should always be to play the ball beyond the Russian midfield line into the space between the midfield and defence. To this end expect to see the two 8’s spin-off of the Russian midfielder to offer the passing option beyond. This pass to break the lines of the opposition is the key to penetrating the defensive block.

The second option is the pass out to the fullbacks who provide width in this area and the capacity to play the ball around the midfield block from Russia.

Thirdly is the pass in front of the defensive structure with a short pass into one of the 8’s who is positioned in front of the midfield block. This pass is designed to provoke a Russian player to press out and break the defensive structure if this happens then expect to see the ball played back to the controlling midfielder and then through beyond the Russian player who has stepped out and broken position.

For me, it is important that Croatia place faith on the Real Madrid midfielder Mateo Kovacic in this match. The young midfielder has a blend of technical and tactical attributes that make him one of the most interesting midfield players in Europe. He can play combination passes in tight spaces but more importantly, he is excellent when running with the ball in the final third and committing defensive players to break out and press the ball.

A midfield trio of Ivan Rakitic, Luka Modric and Mateo Kovacic for me gives Croatia a blend of qualities that few international sides can match. With Kovacic able to beat his man and attack in central areas you immediately put the opposition at a disadvantage.

The question will be whether the Croatian coach will be brave enough to use this midfield configuration?