On Tuesday night, knockout stage-hopefuls Iceland tried their luck against Group D leaders Croatia. Unfortunately for Heimir Hallgrímsson’s side, a Gylfi Sigurðsson penalty wasn’t enough to secure a victory for the smallest country at the 2018 FIFA World Cup. Croatia’s Ivan Perišić and Milan Badelj scored a goal each to cap off a perfect group stage, guaranteeing the top seed and condemning Iceland to an early exit. 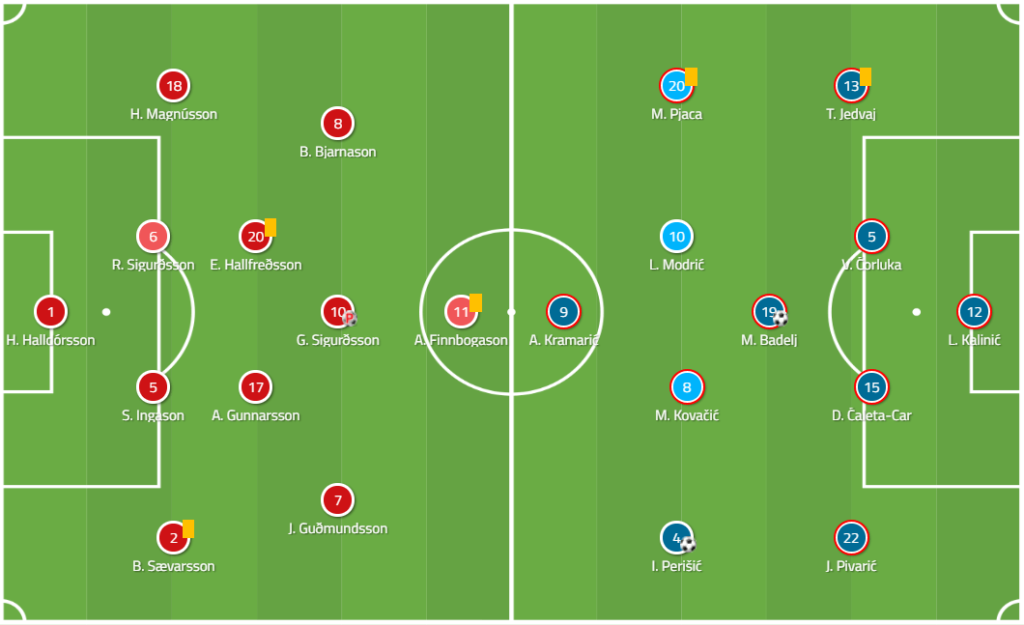 Iceland came into the match needing a victory and an Argentina win or draw against Nigeria. Knowing this didn’t change Iceland’s game plan, though, as the side kept their conservatively-oriented 4-4-2 defensive formation. In attack, this often turned into a 4-2-4 with wingers Guðmundsson and Bjarnason moving high up to pin back Croatia’s full-backs. In the end, most of Iceland’s chances came from long balls and defensive traps.

Croatian manager Zlatko Dalić used an almost completely rotated squad as his side were already guaranteed a Round of 16 birth. At worst, the Croatians would finish in second, but a spot atop the group never seemed in doubt throughout the 90 minutes of both this and the other group match. As seen above, only Luka Modrić and Ivan Perišić retained their place in the starting eleven from the Argentina fixture. Impact players like Mateo Kovačić and Andrej Kramarić got a chance to stretch their legs on the pitch while Duje Ćaleta-Car and Marko Pjaca gave us a glimpse into Croatian football’s future. 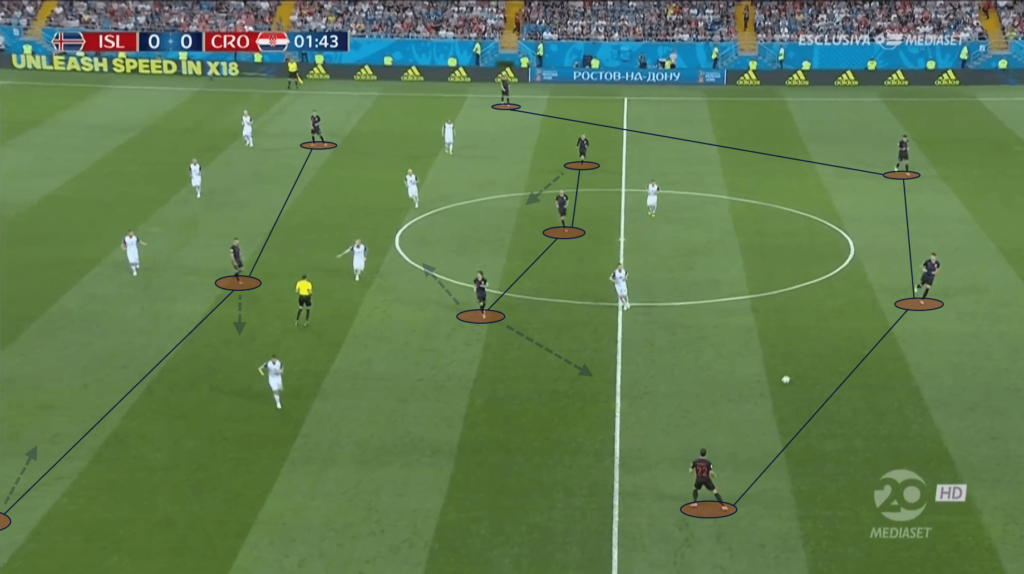 Going into any fixture, Croatia’s main advantage will always be its midfield. The technical presence of Luka Modrić alone is enough to keep the ball in tight spaces; supplement that with Kovačić and Ivan Rakitić (who came off the bench) and you’ve got a smart, athletic, and skilled midfield contingent.

Therefore, Dalić went into the match against Iceland with the knowledge that his Croatia will control the ball easily. In fact, the first 10 minutes featured little to no possession for Iceland. Modrić and Kovačić combined well with fellow midfielder Milan Badelj and forward Andrej Kramarić to retain the ball in the central and half-spaces.

Wingers Perišić and Pjaca often started wide before tucking inside. Not only did this open up space for full-backs Tin Jedvaj and Josip Pivarić to get forward, but link-up play with Kramarić was more attainable. In fact, Kramarić was an unsung star of the night with his pressure-relieving space invasion in deeper and wider areas. He was versatile in his movement during build-up and in the final third, which could give Zlatko Dalić a selection headache against Denmark. 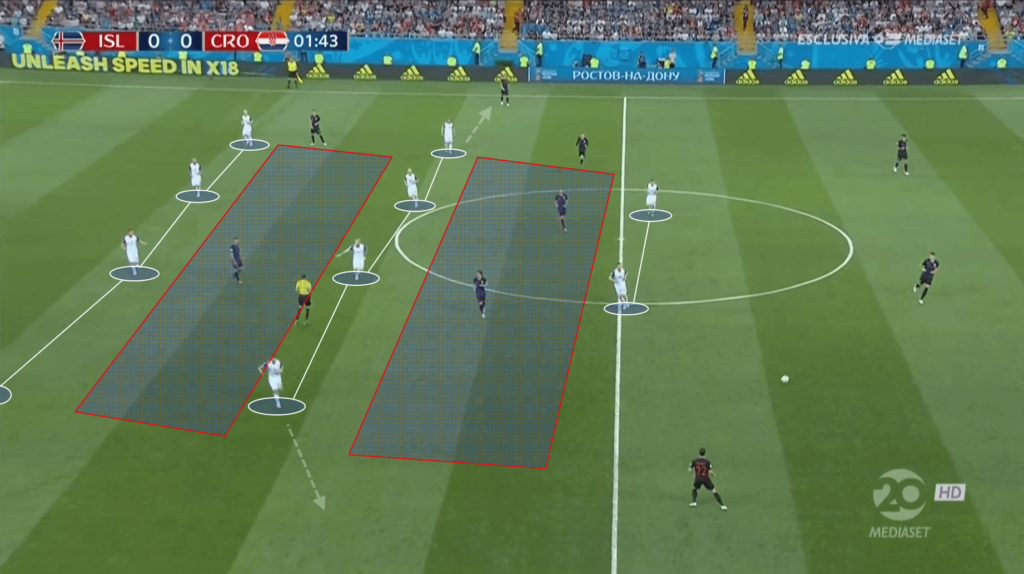 Above is the same screenshot, but this time highlighting Iceland’s defensive formation. As was previously covered by Juan Dopazo, Gylfi Sigurðsson pushes up to form a very firm 4-4-2 mid-level block. Croatia found it relatively easy to advance into the final third — or at least the second phase of their build-up — and this was largely due to space between Iceland’s lines.

Croatia’s midfield trio has space behind Sigurðsson and Finnbogason to turn once getting the ball. Furthermore, the slightest of diagonal runs by Kramarić would free him up. With one or two passes, Croatia have surpassed two of Iceland’s three lines. This was made easier by Iceland’s denying of space on the flanks, as their wingers would close down wide Croatians. This exposed Iceland’s central midfielders to penetrative passes with little cover. 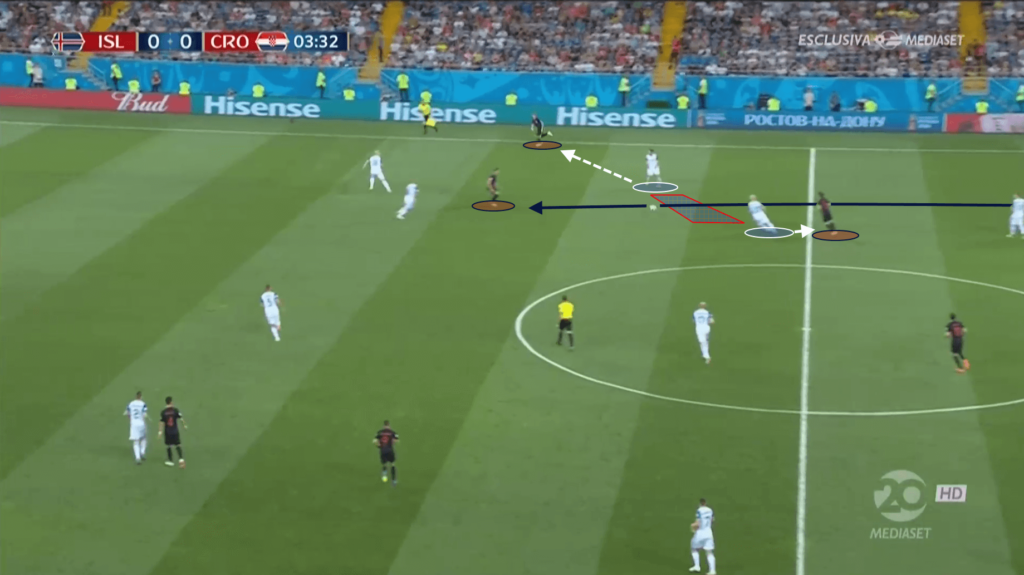 Iceland’s weakness in defending in the middle of the pitch is exemplified in this pass by central defender Vedran Ćorluka. By virtue of Croatia’s wide defensive line when on the ball, Ćorluka has a good angle to pass in the right half-space. As we can see, Bikir Bjarnason (wide) is drug wide by Croatia’s right-back Jedvaj. Similarly, Emil Hallfreðsson is too busy man-marking Modrić to close down the half-space.

Both of these distracting defensive duties combine with a smart inward positioning by Marko Pjaca. Upon receiving the ball, the winger has many options to pass. However, Iceland can count themselves successful if their goal is to prevent the final ball from being played. Often, Croatia would lose possession once penetrating to these areas in front of Iceland’s back four. 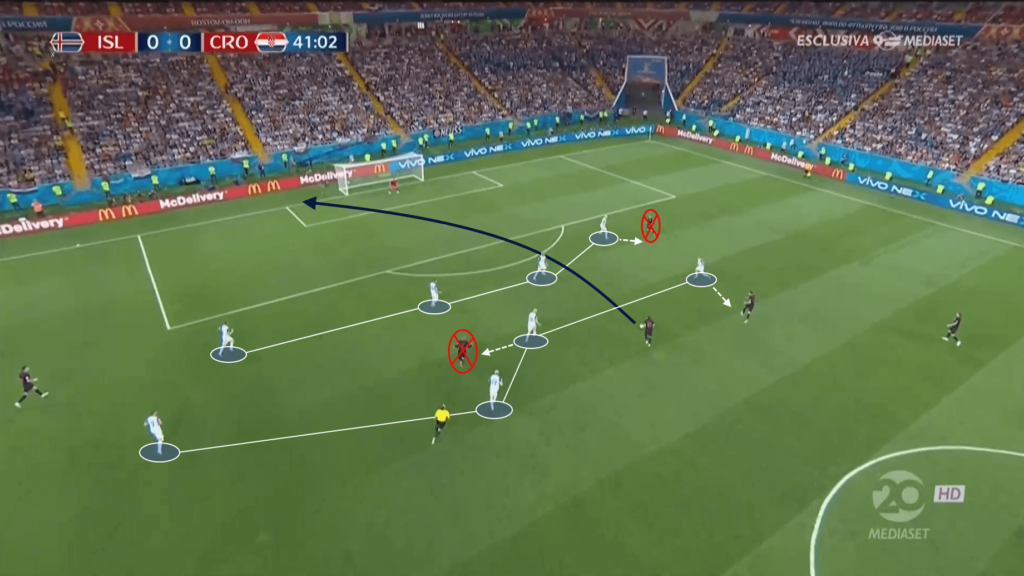 Luka Modrić’s long shot in the first half — seen above from a sky camera — shows just how good Iceland were at defending the final pass. Modrić’s only two threatening passing options are closed down well, and thus he is forced to take a long shot. Croatia struggled to create good chances for long periods of the match because of Iceland’s strong organisation in their defensive third. Yet, their first goal came from a similar situation in which the second ball was won after a cross from a central area. 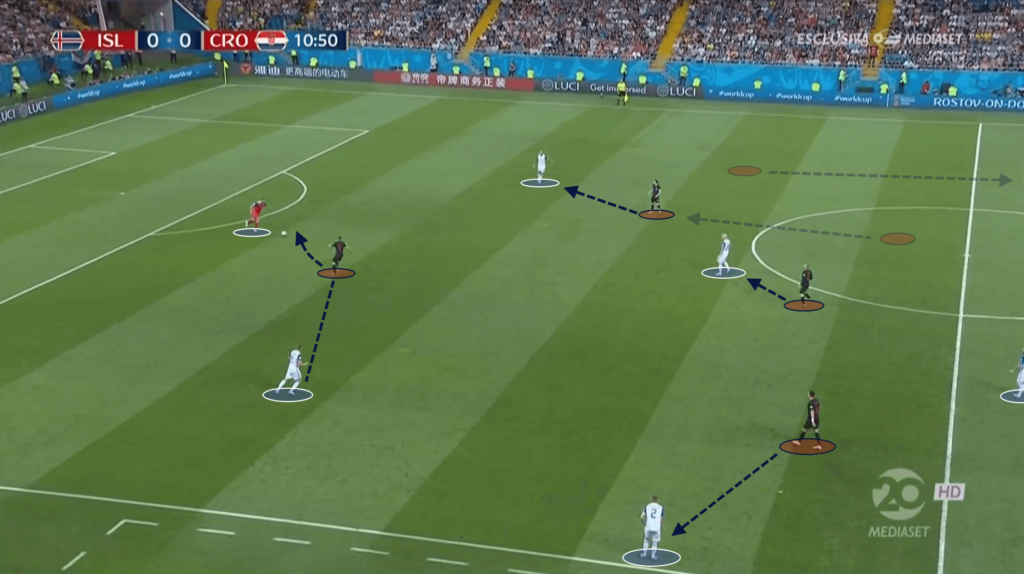 The Vatreni set out to control the match on both sides of the ball, keeping possession and aggressively defending. Though they often sat back, Dalić’s men would start out by pressing high. Here, Croatia use a man-marking system with Modrić coming out of midfield. Space is left in the midfield, but Croatia’s defenders were generally good at winning aerial duels. 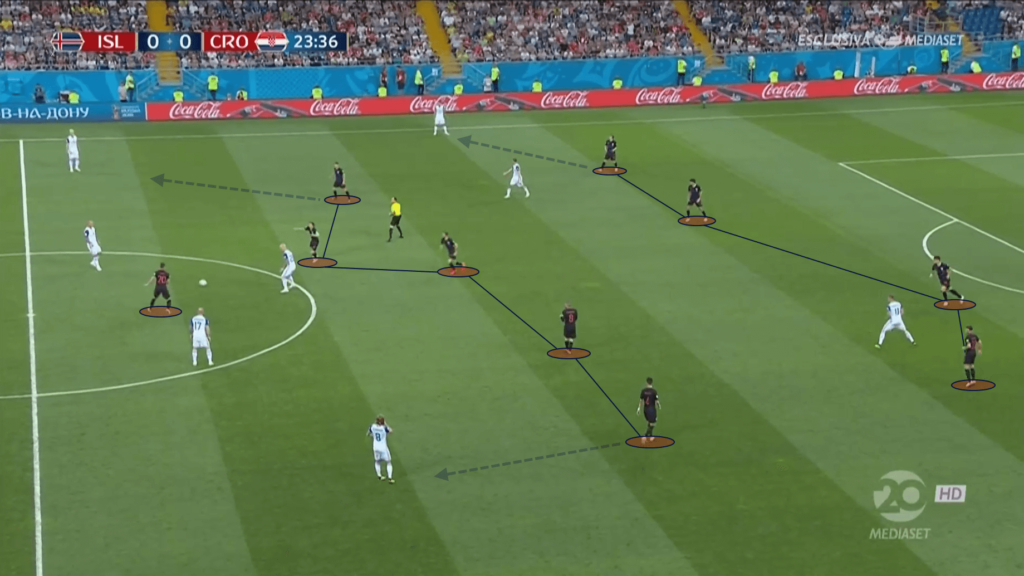 Croatia formed somewhat of a 4-5-1 when defending deeper in their half. Like their opponents, Croatia left some space between their midfield and defence but Iceland don’t have the technical ability to exploit this very often. Croatia set out to lock down the flanks, a strength of Iceland’s. We can see the wingers positioned to close down possession in wide areas. 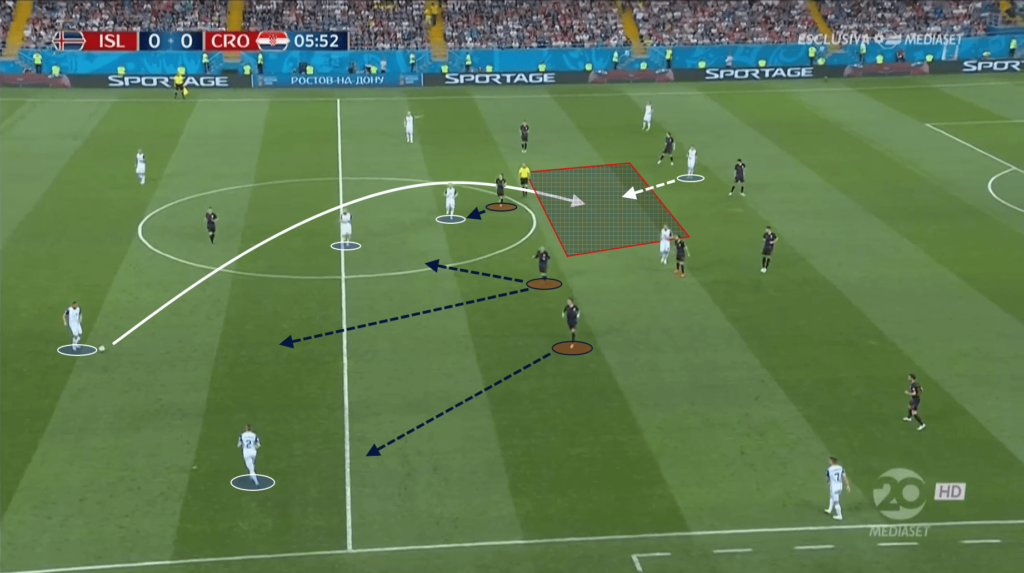 When Croatia did sit back, Iceland occasionally found ways to break lines in a direct manner. Here, centre back Sverrir Ingi Ingason makes a short pass, gets it back, and looks for a long ball. The midfielders of Croatia are drawn out, opening up space for a pass in a dangerous area.

It’s possible that Iceland exposed a weakness in Croatia’s defensive setup here. The Croatians are good at pressing high, but that press is quickly turned to a mid to low-block. Space and time are afforded to opposing defenders on the ball, which opens up opportunities such as the one above. Perhaps Dalić should set his side out to defend with more of a mid-press at the halfway line. 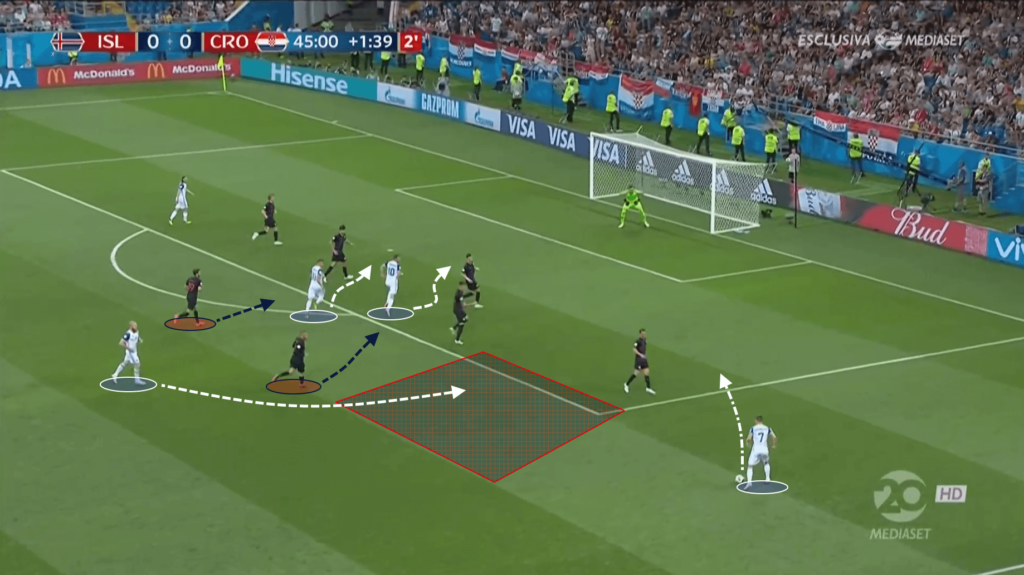 When Iceland manage to make it into the final third, they push a lot of bodies into the box. Gylfi Sigurðsson can be seen joining his striker and winger in the box, providing targets for a whipped cross. However, as Guðmundsson dribbles towards the box, Croatian midfielders Kovačić and Badelj move closer towards goal. Aron Gunnarsson then had space to shoot from outside the box. 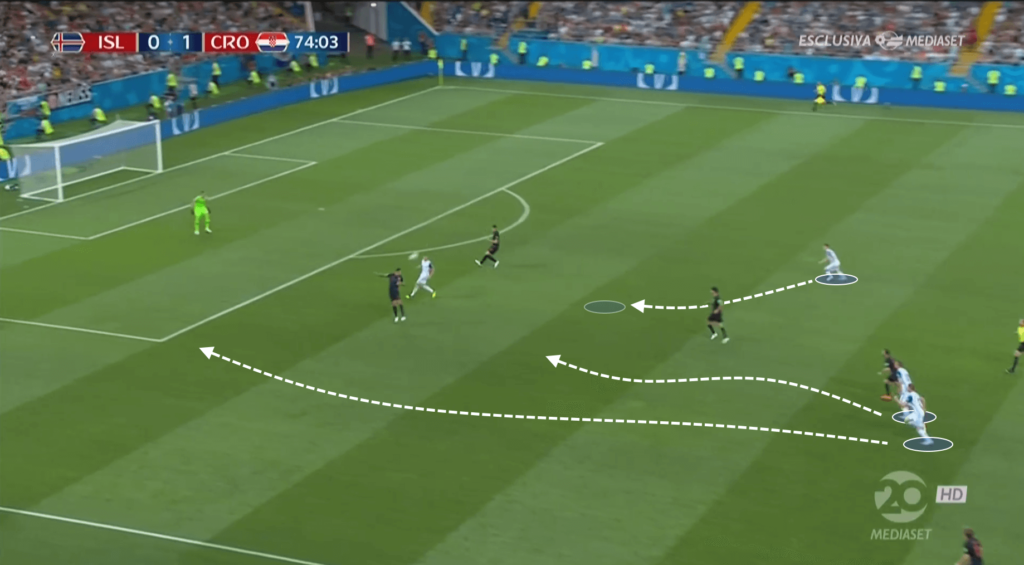 After conceding early in the first half, Iceland were forced to push bodies forward to find two goals. As is the norm with this Iceland side, this often comes in the form of direct attacks. Here, Iceland win a penalty after winning the knockdown of a long ball. Croatia clearly commit too many players forward, leaving space for Sigurðsson on the left to receive a pass. Dejan Lovren handled the cross in the box, and Sigurðsson scored the equalising penalty.

In the end, Iceland weren’t able to find a winner and Perišić scored a winner for Croatia in the final minutes. Iceland’s defensive organisation was admirable, but ultimately Croatia found too much space in behind their midfield line. However, Heimir Hallgrímsson can be proud of the work he and the Iceland squad did in Russia. The smallest country to ever qualify for the tournament shut down Messi’s Argentina and frustrated Nigeria and Croatia for long stretches of time.

Croatia can take both positives and negatives from this match. Denmark may be able to exploit their lack of a systematic defensive block with their long balls towards forwards. Croatia have also struggled to create chances inside the box for extended spells of possession, despite their dominance in midfield. That being said, the likes of Luka Modrić and Ivan Rakitić should be able to pick out smart passes when afforded time on the ball.

Congratulations Iceland for a fantastic effort, and congratulations Croatia for a perfect group stage. If you would like to read more articles by me, Alex Dieker, click here. Want to learn more about Croatia’s Round of 16 opponents? Check out our Peru vs Denmark analysis.