After Switzerland surprisingly was able to gain one point against Brazil they were also capable of beating Serbia in their second game. Against Costa Rica, they wanted to advance to the next round. Due to the loss of Serbia against Brazil, the draw against Costa Rica was enough for Switzerland. In the next round, the team of Vladimir Petkovic will take on Sweden in the Round of 16 at this FIFA World Cup. However, Switzerland struggled in the game against the compact defensive organisation of Costa Rica and their quick counter-attacks. They dominated the game but especially in the first half Costa Rica was the team with more chances. Due to a fantastic performance by Yann Sommer in the first place, Switzerland could hold their unbeaten streak at this FIFA World Cup. 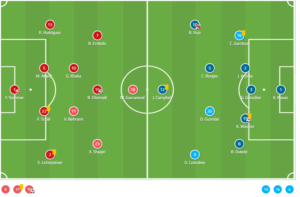 As I mentioned above Yann Sommer was crucial in goal for Switzerland. The centre-backs Akanji and Schär who are both capable of playing line-breaking passes constantly played well and were able to find the offensive players Shaqiri, Dzemaili and Embolo between the lines. Besides the centre-backs, Granit Xhaka was the fixpoint during the build-up of Switzerland. The central midfielder from Arsenal controlled the game and tried to find a way through Costa Rica´s narrow shape. However, he had a hard time dealing with all sorts of pressure from Costa Rica.

Costa Rica´s main focus while defending higher up the pitch was to close down Xhaka and give him no opportunity to face the game with the ball at his feet. Therefore, Guzman usually moved a bit higher or Campbell closed the passing line to Xhaka.

Costa Rica again lined-up in a 5-4-1 but their coach Oscar Ramirez gave them the possibility to press higher. Normally in a 5-2-3/5-3-2 with some asymmetric elements in it which I will show later. With Joel Campbell, they had a versatile and quick striker up-front. After they won the ball Costa Rica tried to counter-attack with quickly or shift the play to the ball-far side. Usually, Ruiz was capable of playing those passes to the forward moving wingbacks.

Costa Rica focused on staying compact out of possession and then quickly counter-attack after they won the ball. Therefore, Switzerland had to dominate the game and create something out of a patient build-up. Usually, Valon Behrami moved in the right halfspace next to the centre-backs. Xhaka occupied the space in front of Costa Rica´s midfield line alone. Consequently, Switzerland created a diamond in possession which gave them more diagonal passing options and a more stable structure in possession.

The fullbacks of Switzerland moved higher up the pitch and usually were the only players positioned wide. Sometimes, one of the wingers would push to the wing in order to overload that area. Dzemaili the offensive central midfielder would then move into the halfspace in order to maintain the structure centrally. Normally, the offensive players moved between the lines and tried to receive passes from Xhaka or the centre-backs, however, especially in the first half Costa Rica´s midfield was compact enough to cut all passing lines.

Dzemaili´s task was to balance the possession play out of a higher zone. He either dropped deeper in order to support Xhaka and to give a connection between the players in the deeper and higher zones. Or he moved between the lines constantly balancing the movement of Shaqiri and sometimes Embolo. Furthermore, Dzemaili was an additional passing option in tight zones after Switzerland was capable of overplaying the midfield line of Costa Rica.

As I mentioned Switzerland struggled to break through the extremely compact shape of Costa Rica. However, Brazil, for instance, struggled too. Sometimes the team of Petkovic was able to move the defence to one side which opened space on the far side or halfspace. Due to the passing ability of Xhaka and the central defenders, Switzerland could quickly switch to the other side or halfspace and find a way through the midfield there.

In that scene, we can observe a stoning pass of Schär between the lines to Shaqiri. Switzerland indicated that they want to attack through the right side. Dzemaili and Gavranovic moved diagonally in the open space behind the last line. As a consequence, Costa Rica moved to that side, however, Shaqiri stayed in position so he got free. On some occasions, Costa Rica lost their compactness in the centre because one midfielder was oriented towards Xhaka. While the wingers focused on pressing the halfbacks of Switzerland´s back-three or the defending of the halfspace with their cover shadow.

Switzerland was able to advance to the space between the lines in the first half, but most attacks were defended well by Costa Rica. The goal resulted out of a quick attack after they won the ball high up the pitch. However, compared to Brazil Switzerland was much more dangerous because they actually played passes in the central space. Normally, they overload one area massively and tried to combinate through the compact space of Costa Rica. With Dzemaili and Shaqiri they have players who are technically gifted enough to do that but especially Shaqiri lacked the necessary game IQ to outplay the defence and create chances.

Here, for instance, Switzerland overloaded the left side of the pitch. Therefore, they created triangles to have enough passing options. Through the fullback, they can move the ball in the centre where they have a 3v2 superiority. But Behrami isn´t the player who feels comfortable under pressure furthermore, Costa Rica quickly pressed the ball carrier and pushed dynamically out of position. Consequently, the ball carrier had less time on the ball while the environment around him changed quickly. Switzerland could hold the ball even under pressure but most of the time Costa Rica could press effectively and Switzerland would lose the ball sooner or later.

Even in 2014, Costa Rica was probably the best-organized defence of the tournament. In 2014 they could advance to the Quarterfinal, this time their attack produced not enough goals, but their defensive structure was really strong again. The 5-4-1 creates a compact shape which has a good vertical and horizontal compactness which makes it hard to play through.

Their main goal against Switzerland was to close the centre. Therefore, the wingers focused on closing the passing lanes into the halfspace, the central midfielders into the ten-space. They rarely followed the offensive players of Switzerland man-oriented the focused on holding their position in order to keep the horizontal compactness. One exception was Xhaka. As I mentioned above one of the central midfielders pushed out of position in order to press Xhaka when Campbell was positioned higher.

The biggest advantage of the 5-4-1 and one of the reasons why it is so hard to attack against that structure is the fact that they not only defend the centre well they also have an advantage on the wing. Usually, Shaqiri and Embolo moved in the halfspace but there four players of Costa Rica had the possibility to press without risking destabilizing the defence. Normally, the halfback of the back-five would move out of the line in order to press the ball carrier. However, Switzerland was capable of overplaying that. Like in the example above they found their offensive players in the halfspace usually when the rest performed some kind of movement which forced the defence to react.

Against Switzerland, the 5-4-1 could sometimes transform into an asymmetric 5-3-2 because Colindres reacted to the positioning of Behrami.

Costa Rica´s chances often resulted out of an interception high up the pitch from whereon they could attack quickly. Switzerland struggled to find ways out of that high 5-2-3 pressing due to the dynamic attacking of the ball carrier.

But Costa Rica not only used counter-attacks. When they had to build-up from behind they had a solid 3-4-3 structure which gave them enough passing options to overplay the pressing of Switzerland occasionally. The main goal was to attack vertically with quick layoff passes or they aimed to find the free man on the far side. When Costa Rica was capable of switching they usually created dangerous chances. Due to Yann Sommer Switzerland only conceded only one goal until the last minutes when Costa Rica scored after a penalty.

In a really interesting game, Costa Rica performed well and was dangerous in front of the goal. However, they again needed a lot of chances, in that game they finally were able to score. Petkovic´s team on the other side moved the ball well and had an idea of how to break through the compact 5-4-1 of Costa Rica. Switzerland looks like a stable and offensively dangerous team. They could become one of the surprises of the tournament. With Sweden, they face an opponent who they are capable of beating in the next round.