FIFA World Cup 2018: How Mexico Have Been Effective On Set-Piece Counter Attacks

A remarkably high amount of the goals scored during the World Cup so far have been scored from set-piece situations. Being extremely careful not to concede goals from corners and free-kicks by having most of the players defending the set piece would be a reasonable reaction. Not for Juan Carlos Osorio!

True to the motto “Attack is the best form of defence”, the head coach of Mexico chooses the opposite option by leaving three players up front. The main idea lying behind this uncommon tactic is to immediately counter-attack after winning the ball.

Even though there is some risk, Mexico seem to have planned their strategy down to the smallest detail. As a matter of fact, they have already been successful with it.

Taking a closer look a look at the Mexican squad, it is noticeable that Mexico’s players are not the tallest. With an average height of 1.79 metres (starting XI of their match against South Korea, data from whoscored.com), El Tri has one of the smallest teams at the World Cup. This is a disadvantage which must not be underestimated when it comes to set piece situations. Most of the teams choose to play a high ball in order to head a goal in an aerial duel.

On the one hand, leaving three attackers high up the pitch mostly forces the opponent to stay on the halfway line with four players to preserve a numerical superiority in the defence. Thereby the height difference decreases because the shortest players are not forced into aerial duels in their own penalty box.

On the other hand, pacy and agile players enable the Mexican side quick counter-attacking. As an example, Lozano has got the ability to outplay defenders in isolated 1v1-situations.

A Strategy Planned With Love For The Detail 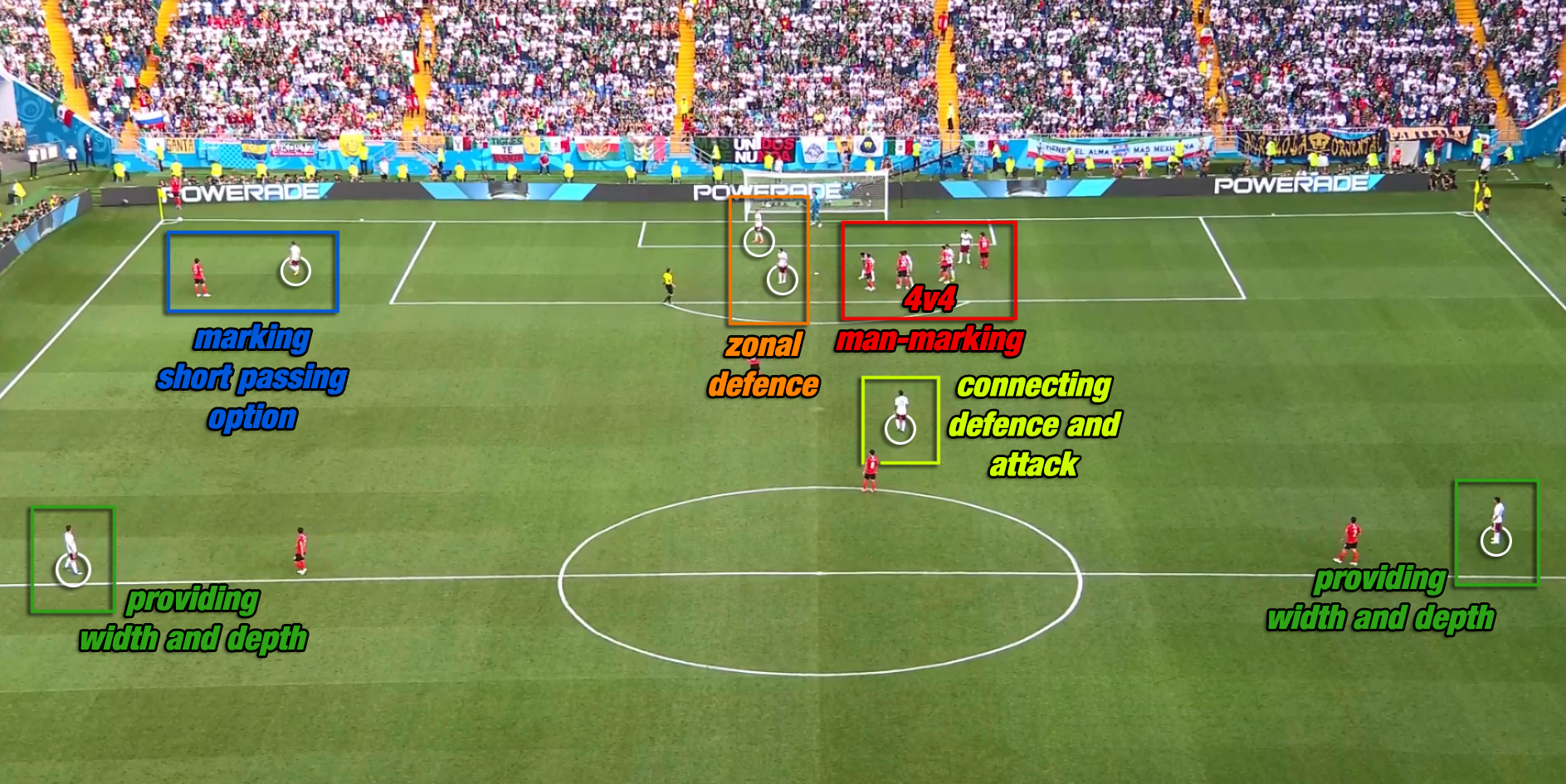 Behind this well-organised strategy lie several considerations in order to find the perfect mixture of defending the set piece and being prepared for the own attack.

Two defenders act as zonal defenders. One on the first post to defend short crosses. The other one at the edge of the penalty box in a central position to gain second balls in dangerous areas.

Guardado as the smallest player on the team (1.69m, data from whoscored.com) has got the task to mark the player providing a short passing option.

The four remaining defenders (with heights of 1.88m, 1.85m, 1.83m and 1.77m the tallest Mexicans, data from whoscored.com) are man-marking the opponent’s players in the penalty box.

As said before, three players stay up front. The wingers of the squad provide both width and depth, whereas Vela is connecting defence and attack. The roles perfectly fit to the strengths of the players. Layún and Lozano, as the most offensive players, combine pace and qualities in dribbling. This can help them to threaten the space behind the last line of defence. For instance in the 2v2-situation of the counter-attack against South Korea after a corner-kick (see picture 2). Carlos Vela, known for his dangerous final passes, was the one who acted as the “connector”. He delivered a through pass and broke the last line after receiving the ball in the own half. Despite Lozano slightly missing the following cross, the situation resulted in a penalty given for Mexico and Vela scoring. 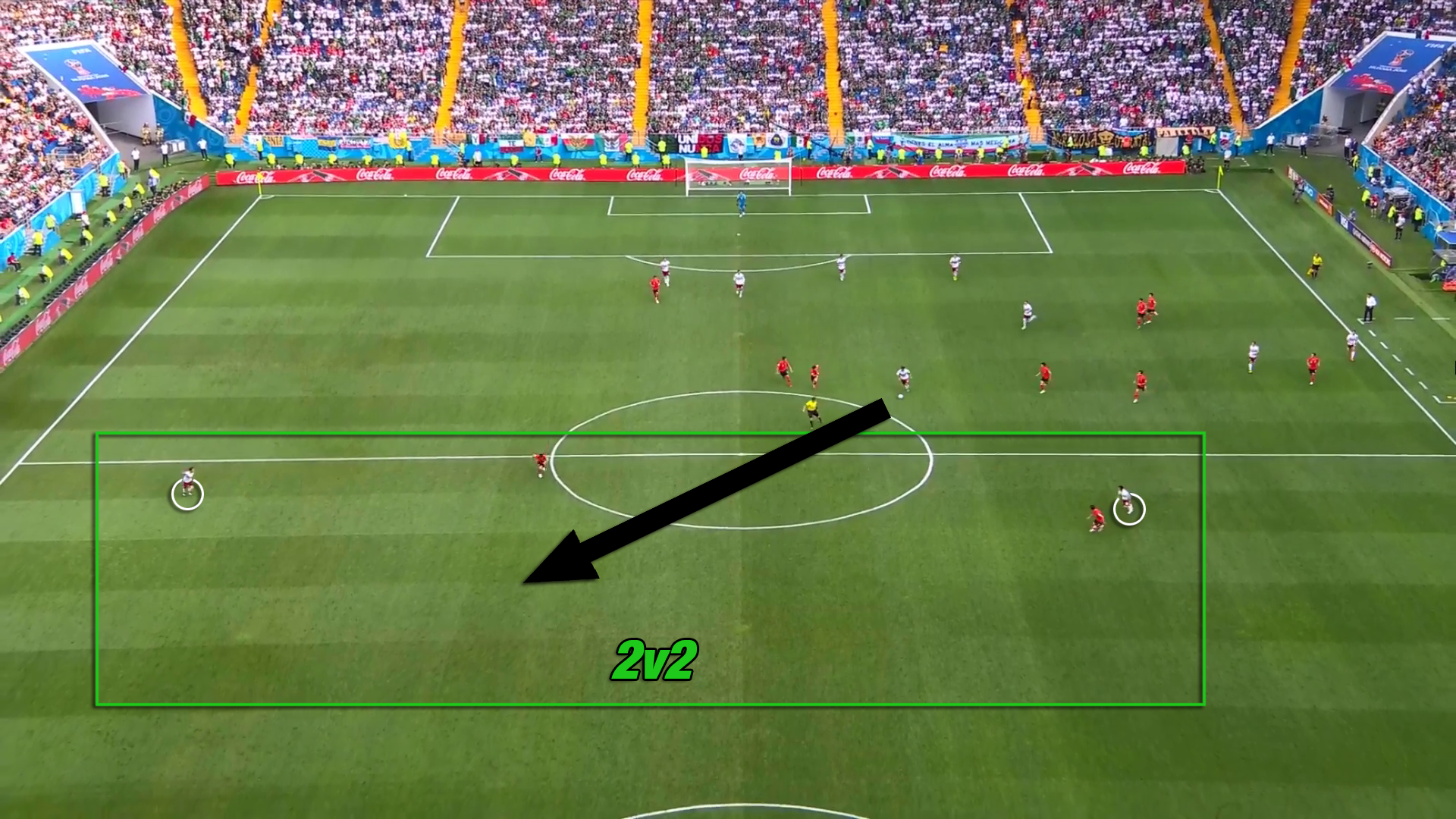 Somehow this variation introduced the lead goal in a match which El Tri won 2-1 in the end.

It seems to be effective to outplay the decimated defence by short-pass play. South Korea already tried that once during their match against Mexico. This situation even resulted in a shot on target. The biggest difficulty is to maintain the zonal defence in such a situation. In the foregoing mentioned example, Mexico’s defender on the first post leaves his position to turn the 1v2-situation on the wing into a 2v2-situation, revealing a lot of space in the penalty box (see picture 3). 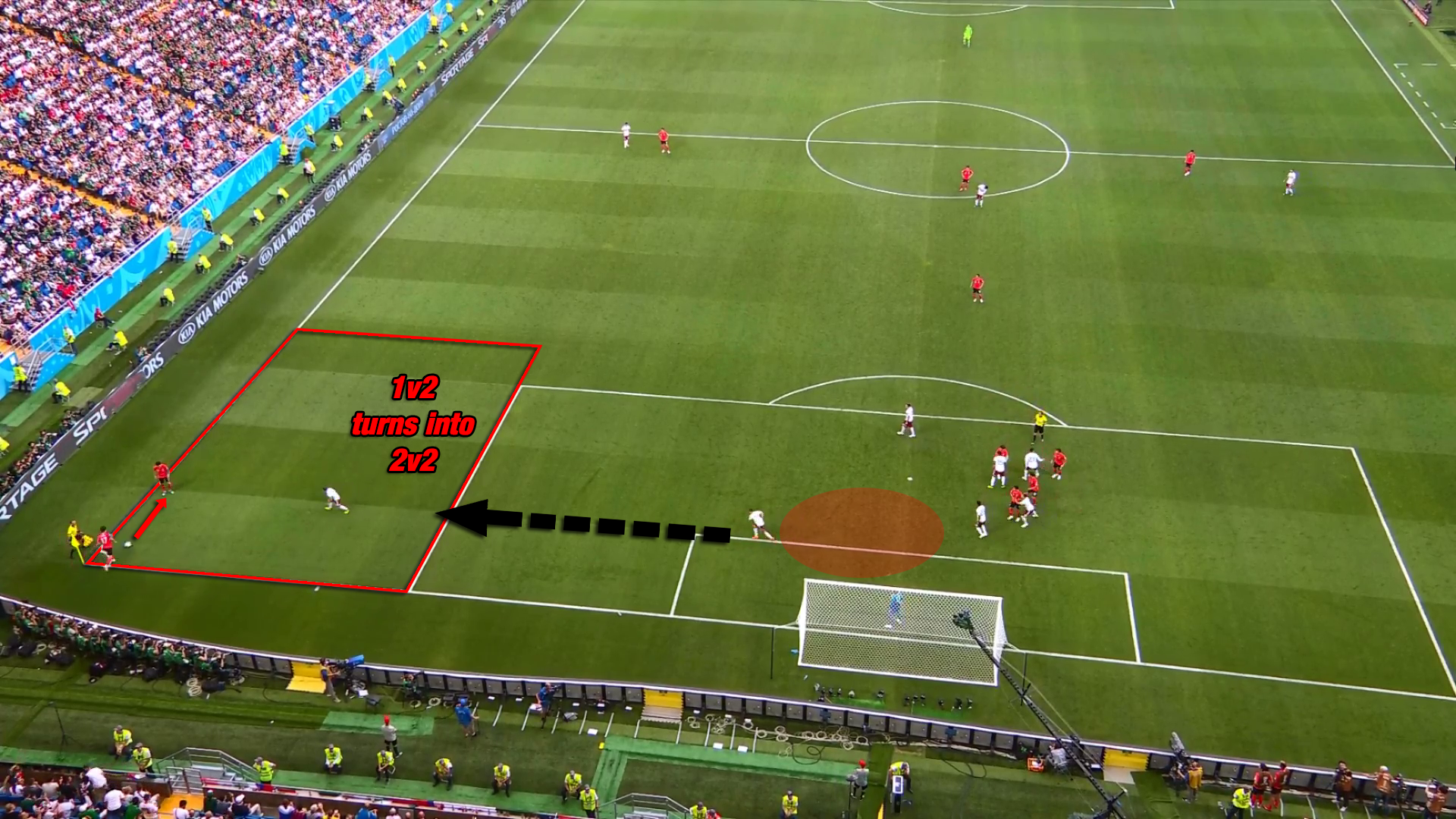 Secondly, with only one zonal defender on the six-yard-box, the responsibility of the goalkeeper to defend crosses close to the goal is relatively high. Although Standard Liege keeper Ochoa has some really good reflexes, he sometimes struggles with catching crosses.

To sum up, Osorio has shown a clear strategy to defend set-piece situations which might be more important than ever before. Still, one has to wait if this option is also successful against teams who are more effective from set-piece situations than Germany and South Korea. Moreover, there might be teams who work out a plan in preparation for their match against Mexico.

But so far the Mexicans have impressed with this courageous and offensive tactic!