Uruguay reached the quarter-finals of the FIFA World Cup 2018 by beating European champions Portugal 2-1 thanks to an Edinson Cavani brace. The performance was typical of what we’ve come to expect from Uruguay during Oscar Tabarez tenure; a solid defence, a hard-working midfield and two world-class strikers which combined creates a fantastic team. Here’s a look at how they managed to beat Portugal.

Uruguay continued with the 4-3-1-2 formation they adopted in the final group-stage game against Russia. Fernando Muslera was in goal behind a back four of Martin Caceres to the right and Diego Laxalt to the left with captain Diego Godin and José Gimenez at the heart of the defence. Lucas Torreira anchored the midfield with Matias Vecino to his left and Nahitan Nandez to his right. In front of the trio was Rodrigo Bentancur who acted as an attacking midfielder linking the midfield with the strikers Luis Suarez and Edinson Cavani.

Portugal continued with their narrow 4-4-2 which saw Rui Patricio in goal behind a back-four of Ricardo, Pepe, Jose Fonte and Raphael Guerreiro. William Carvalho and Adrien Silva sat in central midfield with Bernardo Silva on the right and Joao Mario on the left. Cristiano Ronaldo was joined up front by Goncalo Guedes.

Uruguay are sometimes called the Atletico Madrid of national teams and it’s easy to understand why. Not only do they have the Atletico centre-backs Diego Godin and José Gimenez at the heart of defence but they also defend brilliantly as a team. The low-block defending of Uruguay is easily the best in the world. So far in the tournament, they’ve only conceded one goal and that came yesterday from a corner.

Against Portugal, they also adopted some interesting pressing schemes early on. Suarez and Cavani would often split against the Portuguese centre-backs while Bentancur would pick-up the dropping movement of William Carvalho. The narrow midfield formation naturally meant Portugal’s full-backs were left free. Therefore Portugal was often forced into early passes into their full-backs where Uruguay then overloaded and pressed intensely. In this way, they prevented any central progression through midfield. 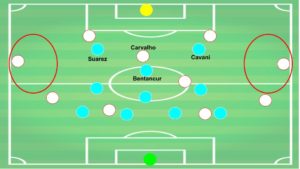 In the image below, Portugal have found Adrien Silva in a deep position where he is pressed by Bentancur. Cavani is very clever here and invites the pass centrally towards Carvalho before nicking in ahead of the ball to win it and launch a counter-attack through Suarez. 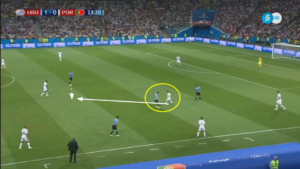 The 4-3-1-2 naturally gave Uruguay a strong central presence and forced Portugal wide. Given the lack of a wide threat from the Portuguese wingers, this proved a very wise decision from Tabarez. Below is an overview of Uruguay’s starting positions. 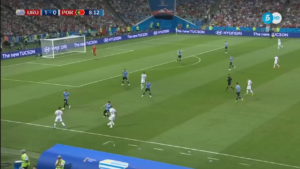 When defending deeper Uruguay’s defensive shape changed with Bentancur slotting in alongside the phenomenal Lucas Torreira to create a more traditional 4-4-2. The formation shift in deeper positions gave Uruguay a greater access to the wings than the 4-3-1-2 could offer. Therefore Uruguay were just as solid down the sides as they were in the central areas. An image of this shape can be seen below. 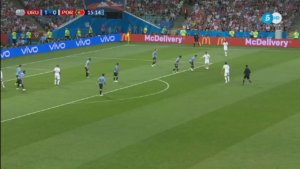 Above all the compactness of the defence and midfield lines were key to Uruguay’s fantastic defensive performance. Godin marshalled the defence brilliantly and the young Lucas Torreira were equally dominant in midfield. Torreira consistently shuffled across with speed to provide cover for his teammates and made a number of important blocks. One example of Torreira’s importance can be seen below as he and Nandez give excellent cover to Caceres as Cristiano Ronaldo looks to attack the right-back. Uruguay did this superbly throughout the game; as soon as the ball was in wide areas they would shuffle across and double or triple up on their opponent. 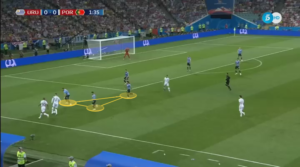 The space Portugal was afforded was the wide areas but crosses rarely caused Uruguay troubles. The reason for this is the thoroughness the defend crosses with. With the ball in wide areas, the full-back would provide pressure on the crosser. The full-back would then be covered on the inside by one or two midfielders. The ball-near centre-back would defend the front-post area while the ball-far centre-back would defend the middle of the goal. The ball-far full-back has responsibility over the back-post area. The remaining midfielders provide cover of a possible cutback. This setup makes them extremely solid and the aerial quality of Godin and Gimenez makes them very strong in this part of the game. 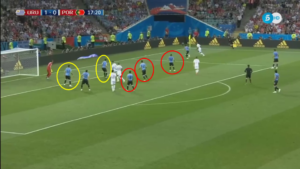 Finally, positioning and tactics are of the highest importance in football. But you can have the best tactics ever seen and be fully prepared for what the opponent will do but still fail if the attitude and mentality isn’t of the highest quality too. This is no problem with Uruguay. Just look at the eight players in this image. Look at their feet. All eight of them are ready to move forward as Bernardo Silva is about to pass the ball just a yard backwards. They are all on their toes and are fully concentrated on what they should be doing. Great to see. 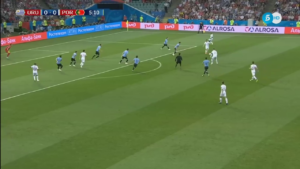 Going forward it was all about Suarez and Cavani. The front-two was quite fluid and very mobile throughout the game. Especially Cavani showed flexible movement and often pulled out wide to create space in attack. Suarez often acted as a target man as Uruguay looked to bypass pressure in midfield.

The below scene is one example. Godin plays the ball towards Suarez who holds off Pepe and lays it off to the onrushing Vecino. Cavani has pulled out wide on the left while Nandez provides width on the right. 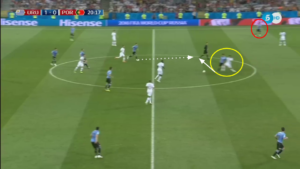 Below, Gimenez has lofted a high ball towards Suarez who chests it out towards Nandez on the right. Cavani has again moved out towards the left wing. 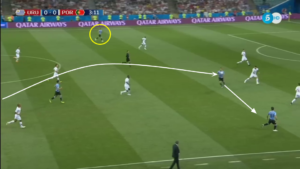 Uruguay’s second goal came from a similar situation as Muslera’s long ball towards Suarez saw him battle with Pepe and the ball dropped to Bentancur who then released Cavani on the left. Cavani then curled his effort brilliantly.

For the first goal, the roles were reversed. Cavani picked up the ball in midfield after Nandez’ pass broke Portugal’s midfield line. Cavani then played a cross-field pass towards Suarez on the left. Suarez then delivered a perfect cross towards the back-post where Cavani was attacking the back-post area. It was poor defending by Guerreiro but in fairness, the cross was basically impossible to defend. The sequence is imaged below. 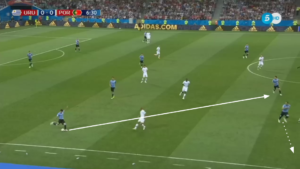 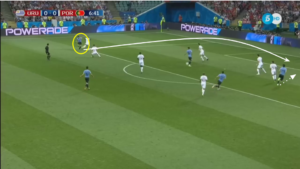 The duo tormented Portugal’s defence throughout the game and will be a tough match for France too. Their quality gives Uruguay hope of a semi-final.

Portugal then? How did it come to this you might wonder. In fairness, they should have known better about how Uruguay would defend. After all, it’s no secret they defend superbly with their low-block. Portugal had troubles throughout to create troubles for Uruguay’s shape as they rarely played in-between their lines. Sure, the space in there was minimal. But it would have needed one or two players positioned between the lines to create difficulties for Uruguay or at least force them even more narrow and therefore open up the flanks. Instead, it often looked like in this image below. All four midfield players outside of Uruguay’s shape with the two forwards surrounded or pulling side, leaving the side without a central presence. 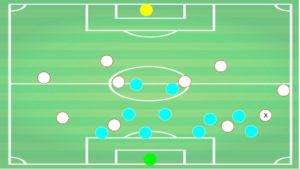 When they did manage to create some danger was from runs into the inside channels between full-back and centre-back. One example is below as Bernardo Silva finds Guedes. These types of play forced the defence to move and react to a new situation instead of just having to shuffle across as Portugal circulated the ball from side to side. 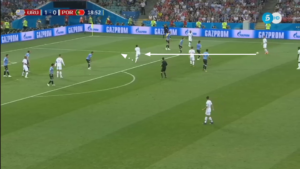 I was surprised not to see Guedes play in a wide position rather than centrally as his quality and pace in 1vs1-situations would definitely have caused more problems for Uruguay than Joao Mario did on the left. Bernardo Silva could, therefore, have been moved centrally with Guedes on the left and Mario on the right. Or Andre Silva should have replaced Mario earlier with Silva staying on the right. That would have created a better central presence between the lines to provoke Uruguay into reacting to Portugal while also possibly creating better 1vs1’s on the wing for Guedes. It’s easy to say in hindsight of course, but Portugal could have done more to cause Uruguay problems.

Uruguay were definitely worthy winners and now move into the quarter-finals of the FIFA World Cup 2018. With the likes of Godin, Torreira, Suarez and Cavani part of such a well-organized team then France will have to watch out.