Both teams went into the match wanting a win to win the group – Russia have so far looked impressive, scoring 8 goals in their opening 2 games, whilst Uruguay have struggled for goals recording a 1-0 win in both of their group games – although their defensive record has been superb. 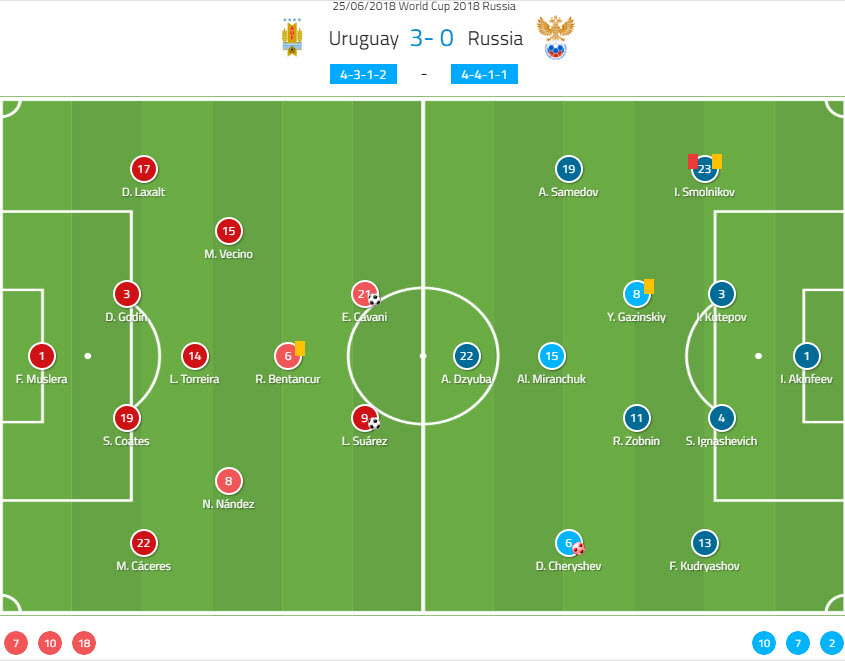 Russia made 3 changes with Aleksander Golovin, Yuri Zhirkov and Mario Fernandes missing out with Aleksey Miranchuk, Fyodor Kudryashov and Igor Smolnikov replacing them.

Having watched the previous 2 Uruguay games, I thought they struggled to create chances and instead, were hoping for flashes of inspiration from Cavani and Suarez whilst hoping that Gimenez and Godin keep things tight at the back. Whilst this isn’t a terrible game-plan it’s unlikely to win you the tournament due to the quality of opponents increasing the further through the tournament you get. This means the number of chances that Cavani and Suarez get will decrease – decreasing the chances of a result. I believed Uruguay’s problems to get the win in their earlier games stemmed from their midfield as they lined up in a flat 4-4-2 formation – this meant the midfield was light on creativity as the Uruguayan wingers (Sanchez and Rodriguez) simply didn’t match the quality throughout the rest of the squad. This left all the creativity to come from Betancur who, despite having a great World Cup so far, was often smothered by teams playing 3 in central midfield.

Therefore I was intrigued to see when the lineups were announced that Uruguay were switching to a 3-5-2 which instead turned out to be a 4-3-1-2 with the talented Lucas Torreira given his first start. The Russian red card 10 minutes before half-time makes it hard to properly analyse the effects of how well the new system performed but we can compare the statistics of how the team performed in the same opening 35-minute spell for their previous games. 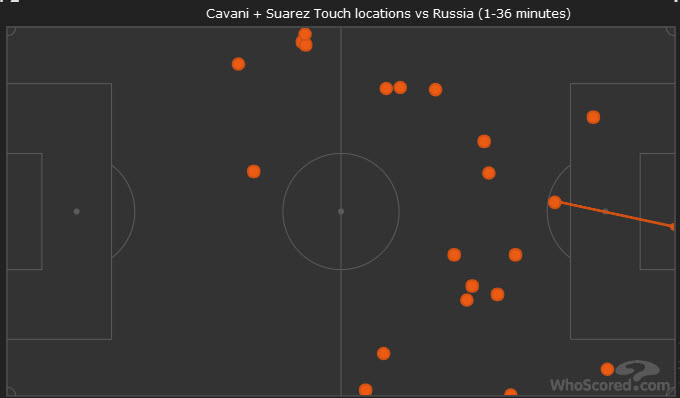 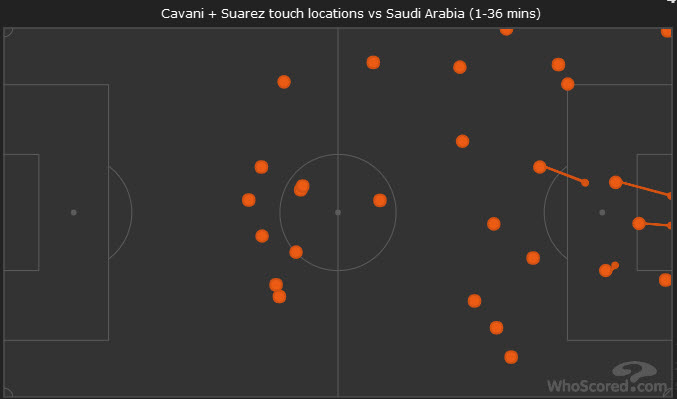 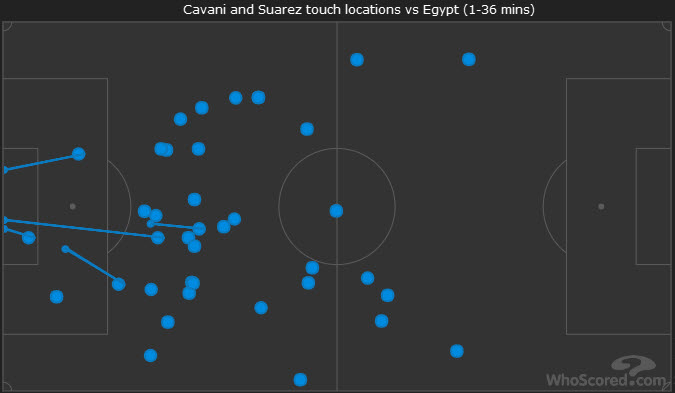 Not much can really be taken away from this sample due to the very small amount of time played in each match – but it’s still an interesting comparison. We can see that in the Saudi Arabia game a majority of Cavani and Suarez touches were either in their own half (24%) or in wider areas, when compared to the Russia game we can see that their touches are much more central and closer to the box (despite having fewer touches and fewer shots) which would indicate better build-up play – especially against tougher opposition.

Uruguay had previously clinched their other 2 wins of the tournament with set-pieces and this was no different with all 3 goals coming from set-pieces. The first was a sublime free-kick from Luis Suarez – at first, I thought this was a clever ploy and routine from Uruguay forming a screen in front of the goalkeeper for Suarez to target that then parts leaving a free area of the goal. Upon closer inspection, though it becomes clear that Ignashevich instead bundles the 2 Uruguayan players out the way – leaving Suarez free to slot home into the bottom corner. Russian goalkeeper Akinfeev’s starting position is also horrible with him actually in the air as Suarez connects with the ball – obviously leaving him with little chance to get down to make the save. 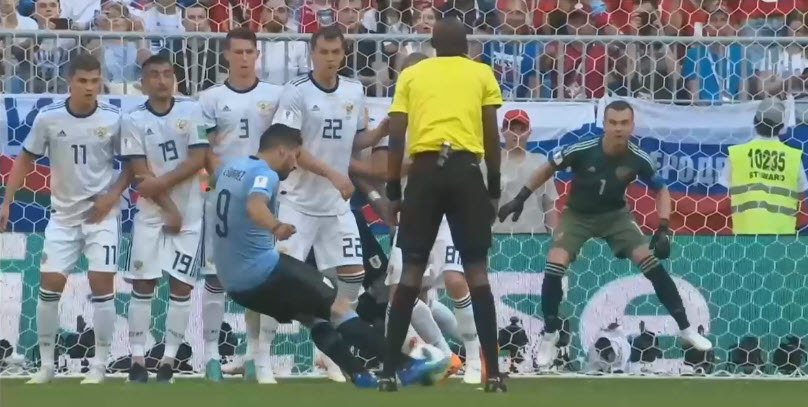 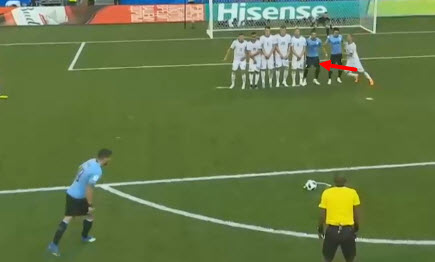 The lineup from the corner that resulted in the final Uruguayan goal was a peculiar one with every player in the box crowded into a tiny area. From an attacking viewpoint, this sometimes makes sense (particularly if the quality of delivery isn’t fantastic) but I certainly can’t see the reason for doing this in a World Cup as Uruguay are outnumbered almost 2 to 1 in this tiny area with limited scope for runs. That being said, they still managed to force a save from Akinfeev which fell nicely for Cavani to tap home from close range!

A resounding win for Uruguay puts them into the next round against Portugal which will likely be an interesting affair – Ronaldo has struggled against the centre-back combination of Gimenez and Godin – with the pair keeping Ronaldo goal-less on all 3 occasions where the pair and Ronaldo have all started. If they stick with the 4-3-1-2 or switch to a 3-5-2, I can definitely see Uruguay creating enough chances to edge the game – provided they manage to keep Ronaldo quiet.