A first versus second clash in Group H pitted surprise table-toppers Japan against Senegal, second-placed only on yellow card count. Both sides caused a bit of a stir with their opening game wins over Group H favourites Columbia and Poland and knew that winning Sunday’s game in Ekaterinburg would all but guarantee their passage to the last 16 round. 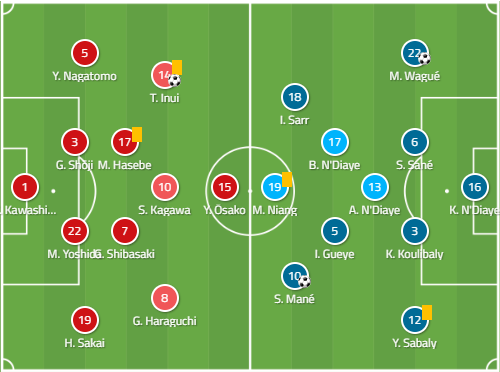 Japan set up in their usual 4-2-3-1, Akira Nishino’s side prefers to dominate possession. The 3 behind Osako push up and inside to support their #9 while both full backs get high and wide to support. Defensive midfielders Shibasaki and Hasebe look to dictate play from deep and Shinji Kagawa is chief playmaker in the #10 role.

Senegal once again flexed their tactical nous, changing up their formation again for this tie against the Blue Samurai. Aliou Cisse this time deployed a 4-3-3 in possession looking to get width from their full backs. The front 3 of Mane, Sarr and Niang are responsible for the quick transition of defence to attack while the duties of the 3 central midfielders are primarily defensive.

Senegal’s full-backs, Wague and Sabaly, gave the Teranga Lions their width in the final third, allowing Sadio Mane and Ismaila Sarr to drift centrally and support M’Baye Niang. To compensate for the lack of defensive cover this system gave, Alfred N’Diaye would sit deep in between the centre-backs Sane and Koulibaly. The width caused Japan issues early on as they deployed a very narrow defensive block. 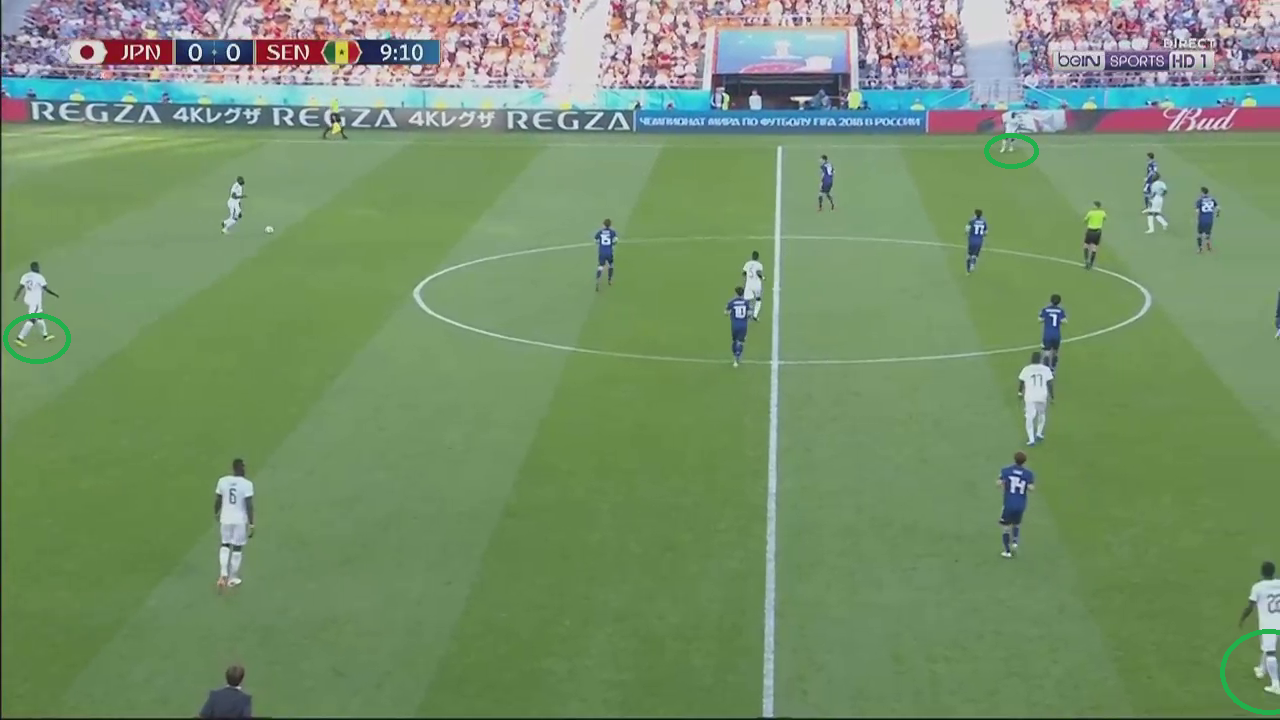 That width would be too much for Nishino’s men to deal with in the early stages of the match as Senegal took the lead in the 11th minute. Sarr used his considerable running power to get past 3 defenders down the right-hand side which pulled play into Japan’s defensive third. The ball was cleared but the Senegal players were first to react and when Koulibaly switched play from left centre back across to Sarr in the right wing, the Rennes man combined with the advanced right-back Wague and Niang to get a cross into the Japanese box. The Japanese back four was very narrow and when a skewed headed clearance fell to the advanced left-back Sabaly whose cross into Mane eventually deflected into the Kawashima’s net – Senegal had a deserved lead. 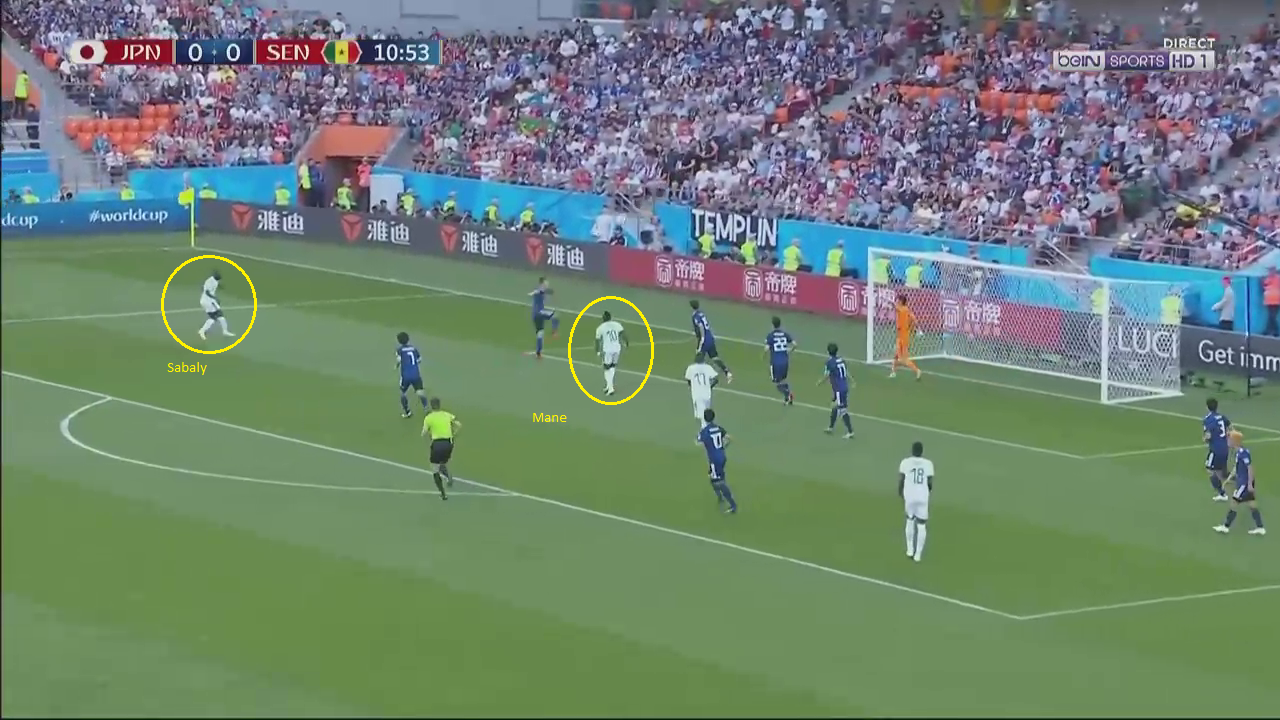 Japan’s lack of a high press allowed Senegal to play the ball long to Niang to try and use their physical superiority. The Rennes striker would position himself on left centre-back Shoji and look to take down the long passes from his defence. 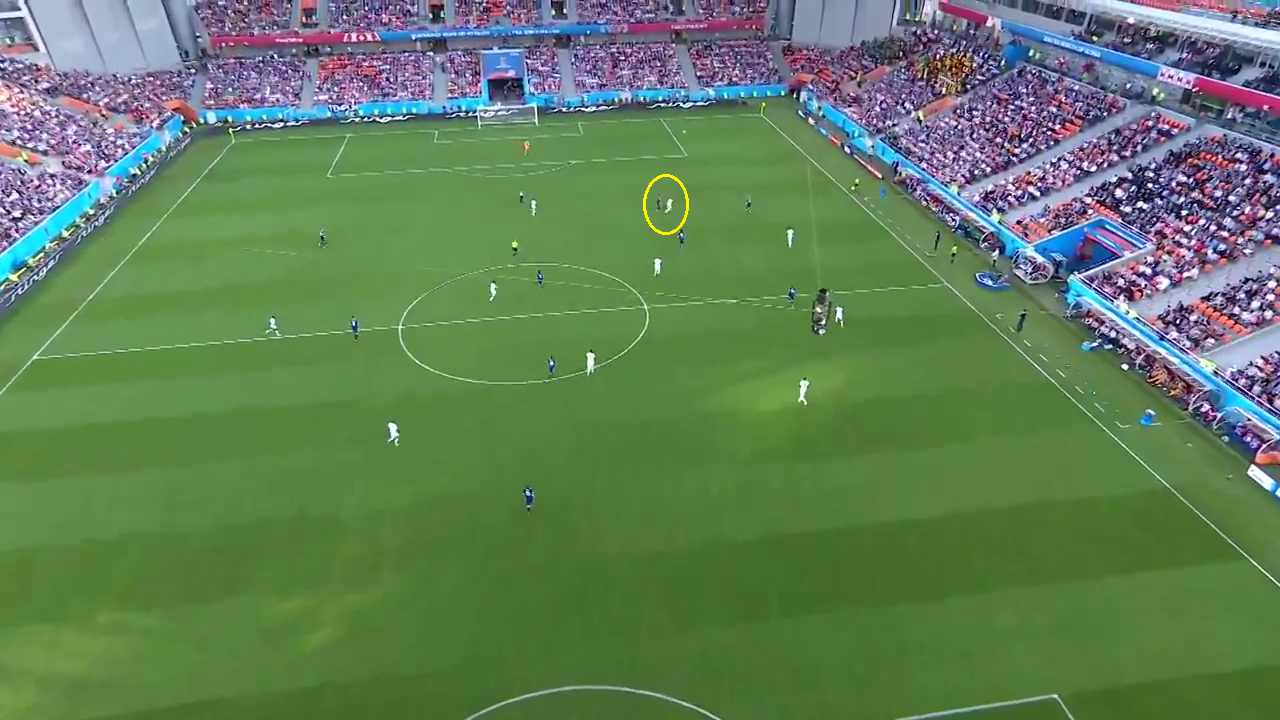 Defensively Senegal kept a tidy 4-4-2 shape, not too narrow suggesting Aliou Cisse’s men fancied themselves in 1v1 battles against this Japan side.

But Japan didn’t panic in the face of a goal deficit and continued to build up from the back. The two defensive midfielders would consistently drop around their centre-backs to initiate attacks. The full-backs and wingers spread across the pitch to try and stretch the Senegal medium-block.

Getting no joy with a very patient build-up in the opening half hour, Japan changed their shape a bit to try and get the ball in behind the Senegalese backline. Kagawa began to drop very deep leaving all 3 midfield players in front of their centre-backs while the full-backs pushed high and wide. This gave Japan a very old-fashioned 2-3-5 shape in possession. 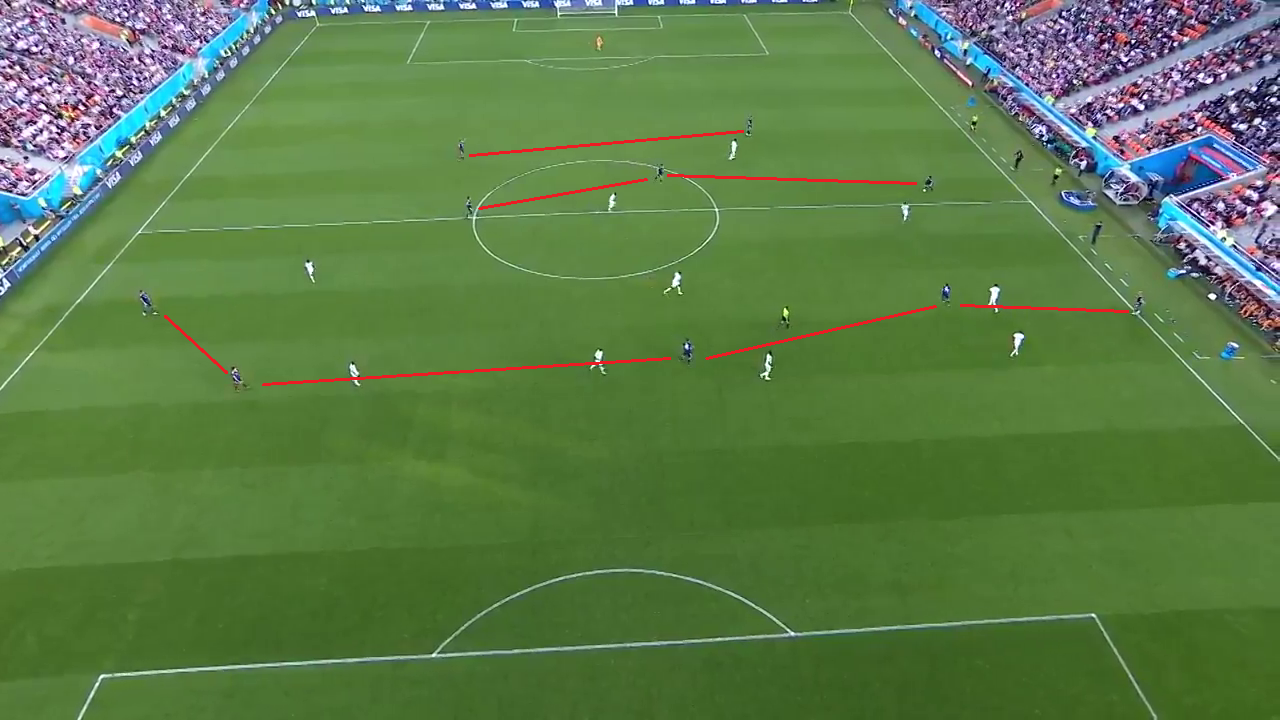 In the 34th minute, Hasebe picked out the outside-left run of Nagatomo with a spectacular pass over the Senegalese defence. Nagatomo still had his work cut out though but with a superb first touch, took Wague and Sarr (the two most inexperienced players on the pitch) out of contention before laying a pass off to Inui who finished off the move with a very smart and classy finish. 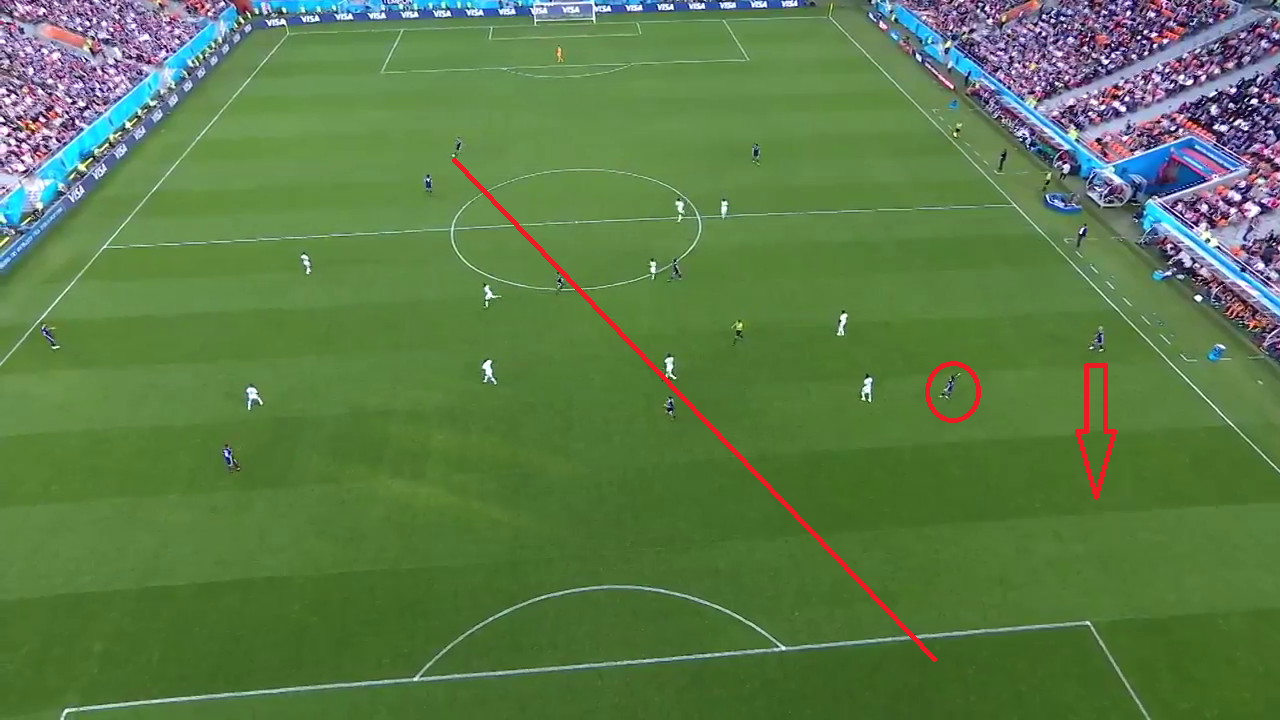 Japan began to dominate proceedings in the second half and made some headway deploying the same tactic that got them their equaliser. Their central midfield players stayed deep, full-backs went high and wide and looked to get in behind the opposition’s defence. 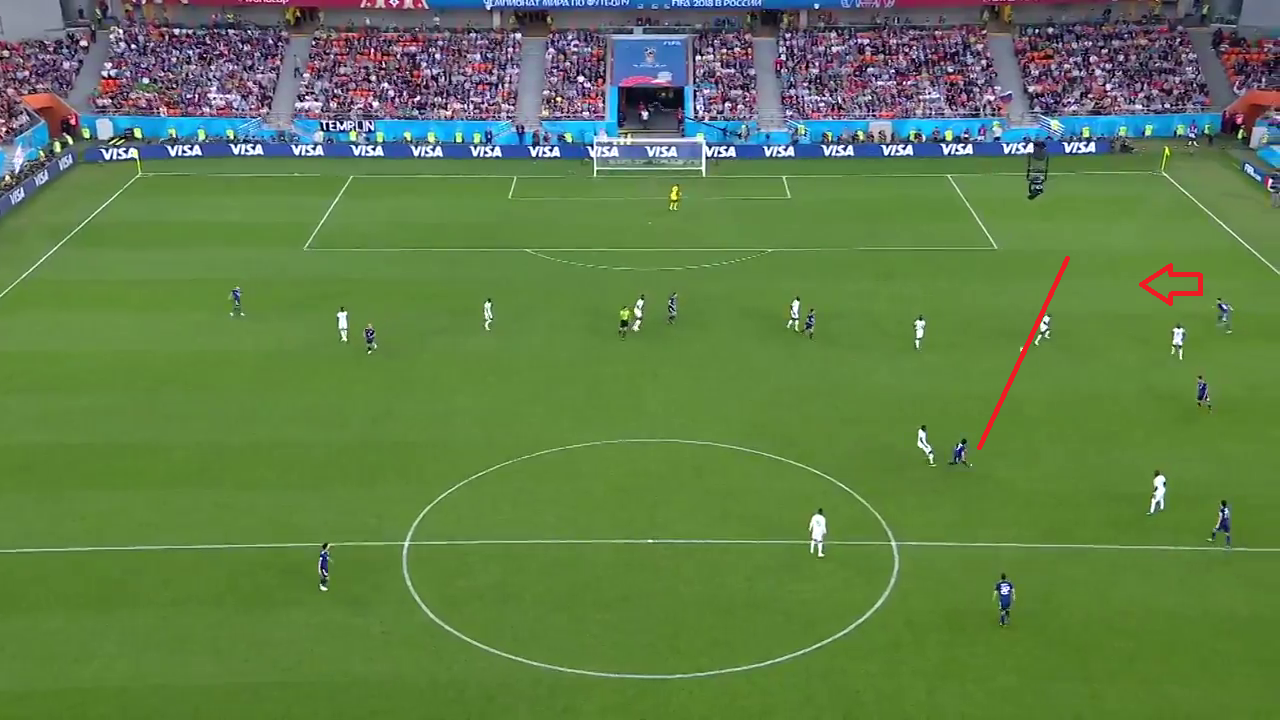 But seemingly learning no lessons from the game’s opening goal, Japan’s narrow low-block again paid the price for ignoring Senegal’s width. Mane held the ball wide left, opening a gap between the Japanese right-back and centre-back which the excellent Sabaly made his own, receiving the ball from Mane before pirouetting around his marker and whipping a ball across the box which Niang flicked into the path of an on-running Moussa Wague who duly smashed home Senegal’s second. 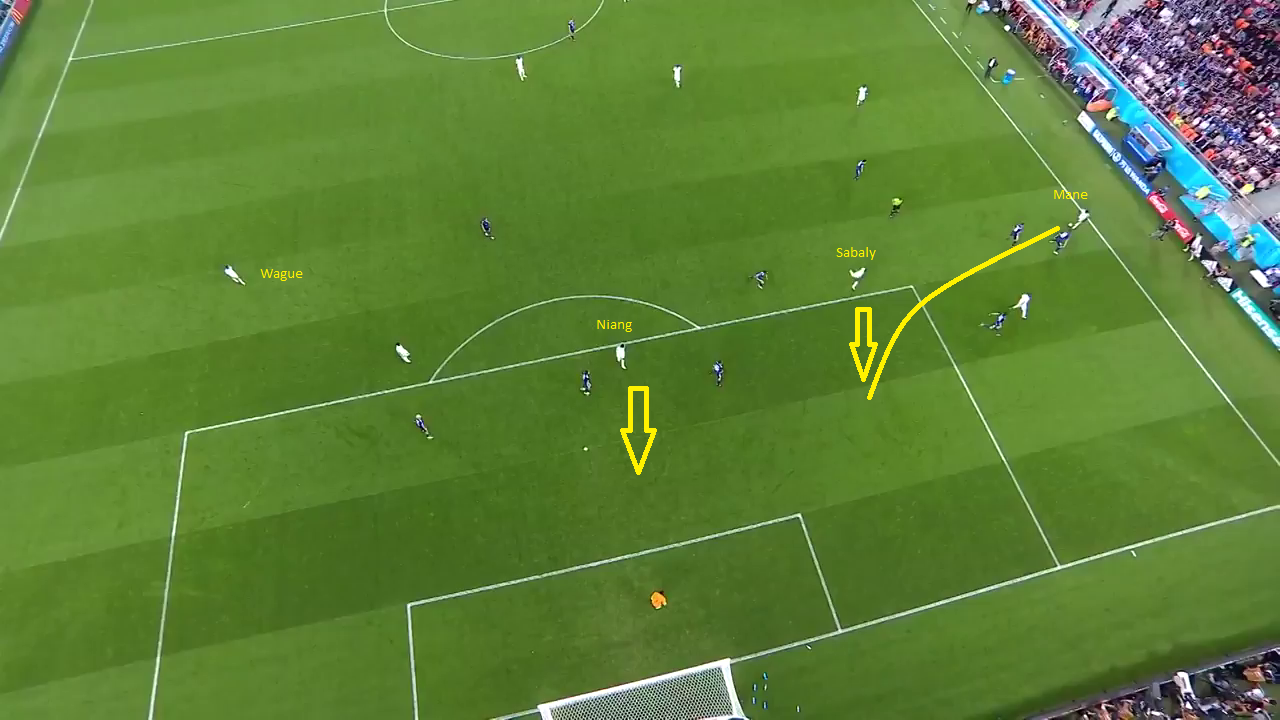 Much like Japan’s equaliser, the goal had come against the run of play. The Blue Samurai would not surrender though and in the 72nd minute, Keisuke Honda was brought on to replace Kagawa. It wouldn’t be long until the Japanese legend made an impression. Japan began to move the ball a little quicker and Senegal began to lose their shape either through a lack of concentration or fitness. Recovering the ball from a clearance, the Japanese midfield quickly played the ball forward and key movement from Nishiro’s men caused panic in the Senegal defence. 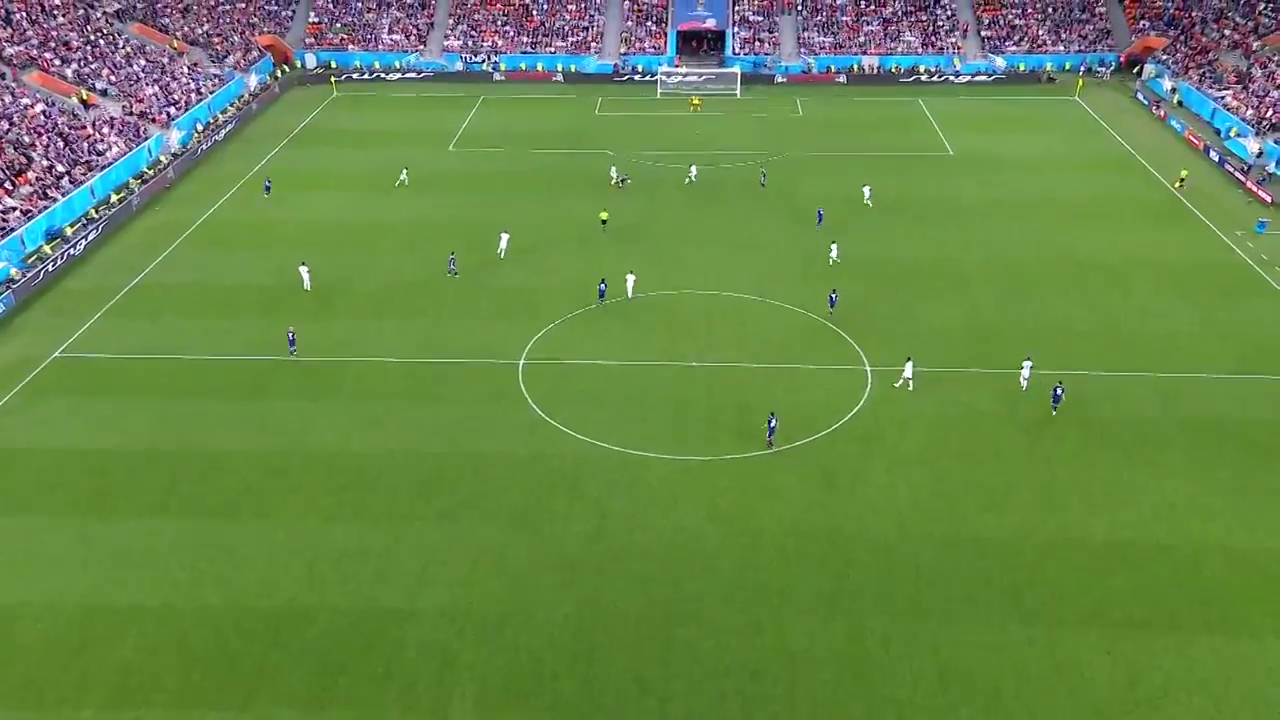 Goalkeeper N’Diaye failed to deal with a cross into the box and the ragged Senegal defence was unaware of a poaching Honda who easily struck home Japan’s second equaliser of the game. 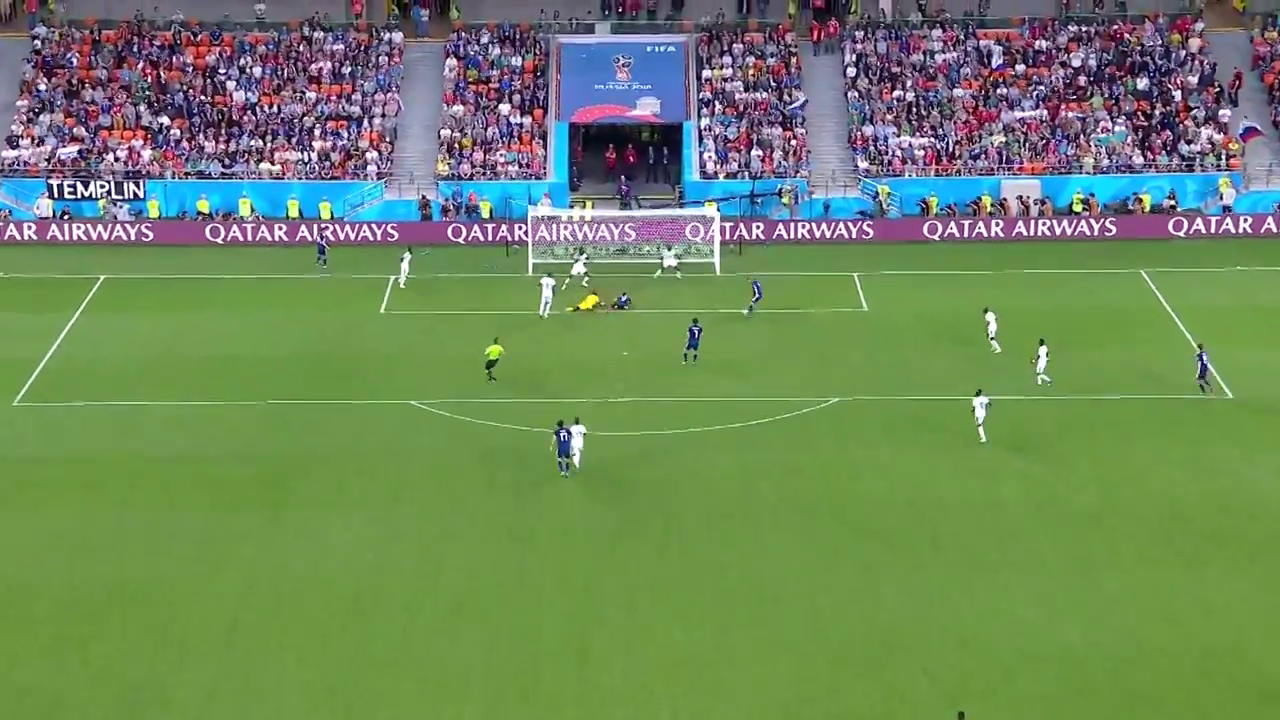 The game was 2-2 after Honda’s goal and little goalmouth action occurred afterwards. Both teams seemed to go through the motions in the late stages, perhaps each happy with a point from this tight affair.

A very interesting tactical battle in which each team continued to catch the other by surprise, there is a lot more to both these teams than was first expected. Japan, as they like to do, dominated possession but failed to register as many shots as their African counterparts. Nishino’s men had the more consistent tactical plan over the 90 minutes but what impressed most was the fighting spirit of the Blue Samurai, twice fighting back from a goal deficit.

With only 44% possession, Aliou Cisse’s men saw less of the ball but had more shots than their opponents. The transition qualities of Niang and Sarr put the Blue Samurai on the back foot and were pivotal to pushing Japan back into their own half. Senegal’s width, particularly on the left from Sabaly, paid off against a narrow Japanese defence but the Lions of Teranga couldn’t take full advantage of either lead they had, succumbing to Japanese pressure twice. Concentration may be Senegal’s biggest issue to sort out ahead of their final Group H match against a resurgent Colombia.