The final game in group H for both these sides saw the group finely poised, with both teams able to qualify for the knockout rounds before the match kicked off, with qualification also resting on the result in the other game in the group between Japan and Poland – with Poland the only team in the group unable to qualify. 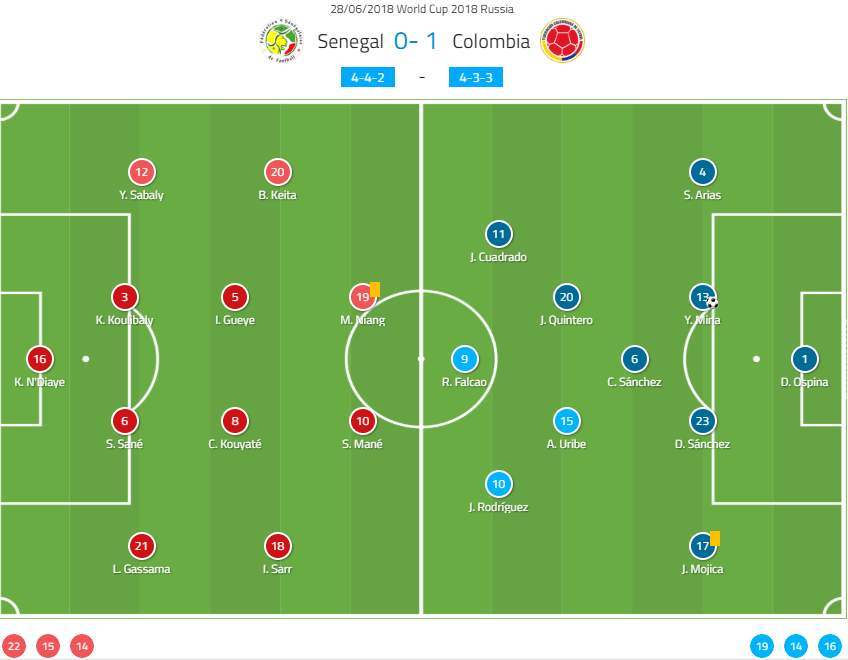 Senegalese manager Aliou Cisse made 3 changes from the team that drew 2-2 against Japan, with Moussa Wague, the right-back who grabbed a goal against Japan replaced by Lamine Gassama. The next 2 changes were in midfield, with Alfred N’Diaye and Badou N’Diaye dropped to the bench, with Cheikhou Kouyate and Keita Balde Diao coming in as Senegal switch a 4-1-4-1 formation into a very attacking 4-4-2 formation that has plenty of counter-attacking threat with the dribbling ability and pace of Sarr, Niang, Balde and Mane.

Colombia made 2 changes from the team that demolished Poland 3-0 with both Carlos Sanchez (returning after serving his ban after his red card against Japan) and Mateus Uribe linking up together in the Colombian midfield, replacing Wilmar Barrios and Abel Aguilar.

Senegal play on the counter

As was largely expected based on the team-sheet, Senegal played a very direct and attacking 4-4-2, that was essentially a 4-2-4 when in possession – with Niang, Sarr, Mane and Balde as the front 4, Senegal obviously had fantastic ability on the ball and pace to burn – posing a huge counter-attacking threat to the Colombian defence.

Interestingly Senegal tried to manipulate Colombia into creating these chances, by allowing Colombia to play out the back in their own half – with the Senegalese forwards staying in space rather than man-marking the potential passing options. Below is one such example, we see Carlos Sanchez circled in plenty of space in the Colombian midfield, positioned between the lines of the Senegalese forwards he’s an ideal passing option and therefore a logical player to be closing down.

Instead, the Senegal attack and midfield leave him open, instead positioning themselves in space – serving a dual purpose. Firstly it encourages the Colombian defence to use Sanchez as an option, but you can see that the Senegal midfield are well enough positioned to close him down if he does win the ball – leaving Senegal perfectly poised to win the ball back, with options in space.

Secondly, if Colombia decides not to use Sanchez and instead work their way down the pitch, then the Senegalese forwards and midfield are well positioned and in plenty of space for when the ball is indeed won.

When Colombia did manage to work the ball down the pitch into the Senegal half, their defensive pressure switched.

Above we see the Senegal shape when the ball is in/near to entering their own half. The wingers and strikers have dropped back deeper whilst the midfield (temporarily down to 10 men at this point due to an injury) creates further pressing traps encouraging Colombia to try to play. When Colombia worked the ball further down the pitch, the space given to the Colombian players tightened, shutting off their options well to win the ball back – giving them a chance to counter. Below is a picture taken just 20 seconds after the above picture, showing how quickly Senegal can shut off the Colombian attack.

Colombia played the complete opposite of Senegal, instead relying on patient build-up play to try to work the ball into Falcao. This started with the defence – Yerry Mina and Davinson Sanchez in the heart of the Colombian defence are both great on the ball, and often utilised the back-pass to Ospina – instantly dropping back to the edge of the box to receive the ball.

As mentioned above, Colombia often found themselves with space in central midfield – also helped by having an extra man over Senegal in the middle of the park that allowed them to play with a bit of freedom. The central midfielders interestingly often looked for Cuadrado on Colombia’s right, often finding him with long-balls over the top, with him often trying to get the better of the Senegal left-back Sabaly, with little success.

Despite dominating possession (with over 59% possession) Colombia however, really struggled to work the ball into Falcao, with Senegal’s gameplan seeming more effective – with Falcao touching the ball just 27 times in the 89 minutes he was on the pitch. This wasn’t helped by James Rodriguez getting injured and having to be substituted after 30 mins, with his replacement, Luis Muriel, barely getting a sniff of the ball whilst on the pitch as well.

A really tactically interesting game, with both teams playing contrasting styles that in the end seemed to cancel each out with very few clear-cut chances with the game being decided from a corner in the form of a Yerry Mina header. Colombia ended up topping the group and would go on to face England whilst sadly Senegal would miss out on a place in the knockout rounds incredibly by having picked up more yellow cards than group runners-up Japan.