Poland had already been eliminated from the tournament after a disastrous group stage. Japan, on the other hand, could still qualify with a draw or at worst, matching Senegal’s result against Colombia would ensure qualification, although I’m sure Japan will be pushing for the win to make their lives that little bit easier. 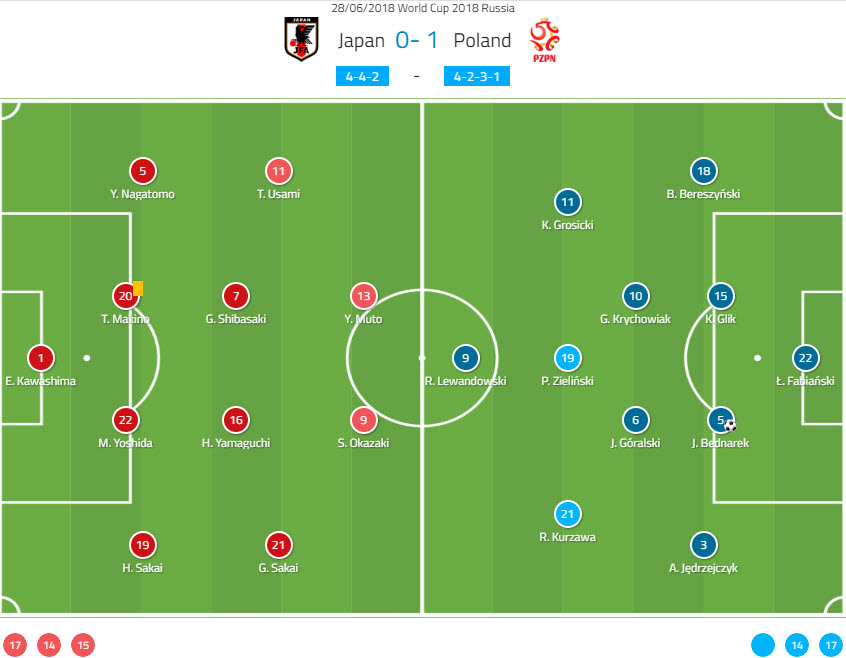 Japan made 5 changes from the 2-2 draw against Senegal with Gen Shoji, Makoto Hasebe, Takashi Inui, Shinji Kagawa and Genki Haraguchi all dropping to the bench with Tomoaki Makino, Hotaru Yamaguchi, Takashi Usami, Gotoku Sakai and Shinji Okazaki their replacements. Interestingly Japan have abandoned the 4-2-3-1 formation that has seen them pick up a win and a draw so far, switching to a flat 4-4-2.

After their 3-0 defeat at the hands of Colombia and with nothing to play for it’s not a surprise to see that Poland also made plenty of changes with Dawid Kownacki, Maciej Rybus, Łukasz Piszczek, Michal Pazdan and Wojciech Szczęsny replaced by Rafa Kurzawa, Artur Jędrzejczyk, Kamil Grosicki, Kamil Glik and Łukasz Fabiański. Poland also change formation, ditching the disastrous 3-4-3 from the last game and replacing it with a much more conservative 4-2-3-1.

It’s an obvious statement to make but when Poland play their best chance of scoring will come from Robert Lewandowski – therefore when facing him it’s likely to be a good idea to cut off his supply. I was sceptical of Japan changing to a flat 4 in central midfield, but it soon became obvious that their superb organisation that impressed me in my preview of the Japan team carried on even when the structure changes.

Japan tried to limit Lewandowski’s impact by firstly cutting off the supply in to him. When out of possession the Japanese defence were often very close to their attack, in a system reminiscent of Atletico Madrid at times in their compactness, organisation and pressing.

They implemented a simple one-man pressing system when Poland got over the halfway line, and not pressing when Poland had the ball in their half – to keep their shape and structure compact.

If Lewandowski did manage to get the ball, Japan simply swarmed him with players whenever he touched the ball, before switching back into their more organised shape when possession had been won. 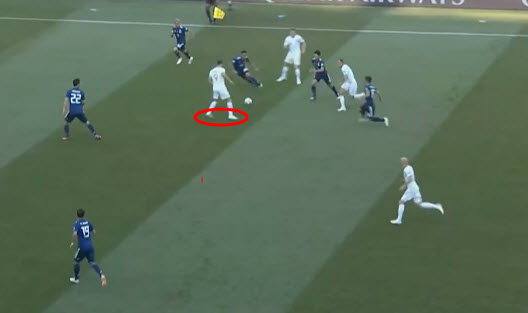 This impressive defending had the intended effect, leaving Lewandowski isolated – with little service into him, which is demonstrated by his touch map, where we can see he was restricted to just 1 touch in the Japanese area. 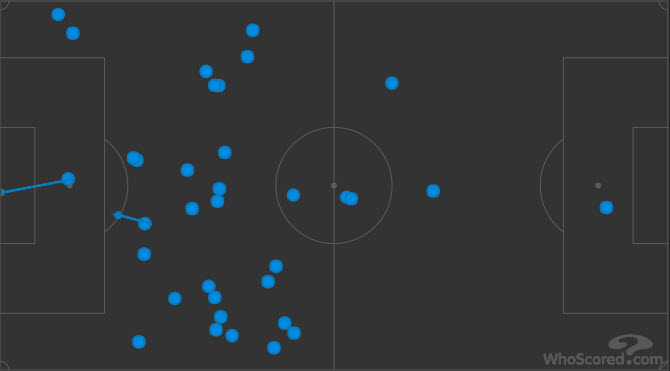 Poland’s lack of plan B

With Lewandowski isolated, the onus was on Poland to adapt to try and find a way through – this simply didn’t happen and they carried on looking disjointed in attack throughout (despite managing to score from a free-kick after 59 minutes), never looking like scoring from open-play despite a number of potential options open to them. Substitutions are one obvious solution – Poland had a number of attacking options on the bench, including Milik, Rybus, Blazczykowski and Linetty that could have helped them with their main problem – breaking down the Japanese block.

When faced with a team as well-organised as the Japanese, it’s often incredibly hard to break the defending team down, but options certainly exist. You can try to stretch the defence by using the full width of the pitch which will create gaps for players to make runs in behind or to try to thread a pass through. This also requires you to take the game to the opposition, with full-backs moving up to support the midfield and the defensive midfield carefully balancing their defensive duties with helping to break down the opposition defence.

Ball circulation is another key component, as moving the ball quickly will also help to break down a stubborn defence – by stretching the play by pulling players out to press, or switching the play and using the time the defence takes to shuffle across to make some progress up the pitch – hopefully, allowing the ball to be worked into a position where a chance could be created.

Poland simply had none of this, occupying poor positions, with no movement and sluggish play which made it impossible to play through the Japanese lines (helped, of course, by the Japanese organisation).

You can see from the above picture that the Polish defender on the ball simply has no good options to pass the ball forwards as none of the Polish midfielders are willing to drop back to receive the ball to hopefully drag one of the Japanese midfielders out – creating space to move the ball forward, the ideal example being the player I’ve highlighted above, he’s in a prime position to do just that, but instead holds his ground – leaving no option for the Polish defender other than play the ball long or to pass the ball around the defence.

When Poland did manage to work the ball up the pitch, it was much of the same, with players grouped tightly together with little movement that made it easy for Japan to nullify. This is again reinforced by looking at the Polish pass map below from the ever-excellent @11tegen11 on Twitter, where you can see that the majority of the Polish possession was between the 2 centre-backs, with the midfield and attack very rarely involved. 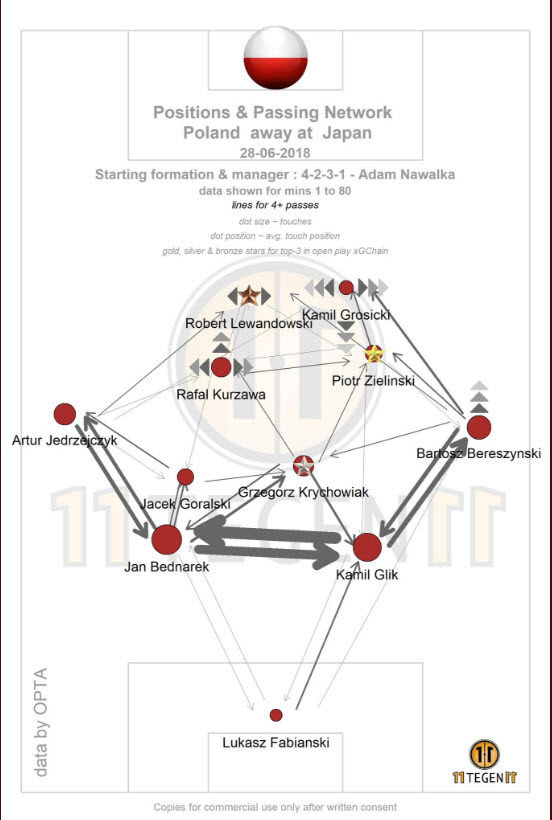 Japan played out the last 10 minutes of the game at practically walking pace as they knew they were likely to qualify if they score remained the same in the Senegal vs Colombia game. They decided not to run the risk of picking up more yellow cards (another 2 yellow cards would have seen Senegal qualify ahead of them via fair play) or a second Poland goal (which would have seen Senegal qualify via goal difference). It’s an unfortunate set of circumstances that ruined an otherwise decent and tactically entertaining game, but a knock-out competition like this will always breed permutations like this so it’s hard to have complaints.