It was a heartbreaking loss for Japan against Belgium. After being 2-0 up and playing dangerously, they got defeated at the very end of the match. Belgium managed to overcome the deficit with an equalising goal from Marouane Fellaini. Then Japan fought for the victory, but that was a kamikaze move because they became highly vulnerable to the counter-attack. After a corner, Belgium could penetrate the space that Japan left and Chadli – the other substitution – scored at an end of the quick break. Thus in spite of the great performance from Japan, Belgium can continue his journey in Russia.

It is unlikely that anyone predicted that Belgium would struggle that much against Japan. Also, it was unseen that Belgium could almost drop out, but Japan showed excellent examples of organised play, humble and hungry for the success. Belgium until that point was not really tested defensively and also in overall, but Japan showed what is the weakness of the Belgian team. 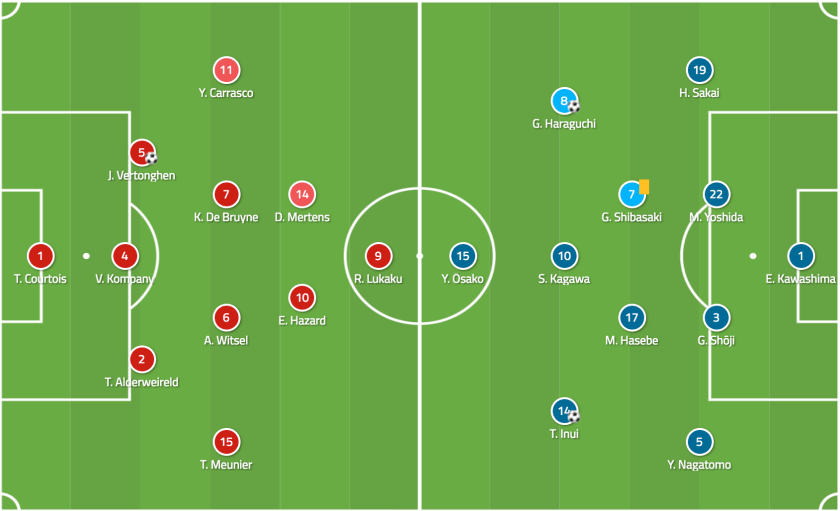 Both sides put the best possible team on the field and with the regular formations. Roberto Martinez sticks with the 3-4-2-1 structure, which showed some flaws this time. It is still just out of necessity, not a fit choice for the squad, therefore the limitations of it came up.
While Japan played in the base 4-2-3-1 shape.

Japan threatening at the left

Surprisingly, Japan instead of playing as an underdog or with a defensive manner rather opted for a quite brave play. They were dangerous in attacks, while organised in defence. During the first half, in particular, Japan enjoyed great success attacking down the left-hand side of the field in their attacking phase. Whilst Belgium defending they formed 5-3-2 with a narrow backline, therefore Japan was able to take advantage of it and penetrate the space in the left wing. In this situation below, the Kagawa – ball-carrier – had two options for passing because of the fact that they made a big effort on getting behind the opponent defensive line on the left side, thus Nagatomo or Hasebe usually joined for Inui. 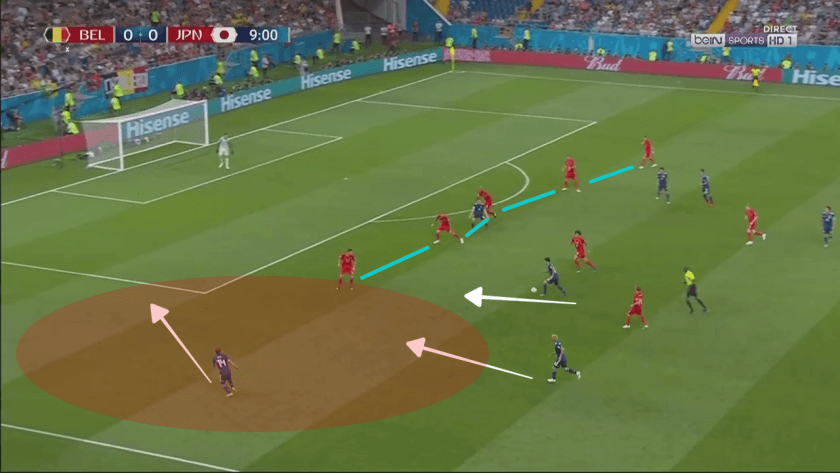 It was important for Japan not to become too vulnerable while attacking, thus they had to somehow eliminate the Belgian counter-attacking plans and attempts. Therefore Akira Nishino ordered his team to pay attention to that and if they lost the ball immediately counter-press the opponent. As you see below, one of the cases, where the Belgian player surrounded with the Japanese players, therefore Japan was able to retain in possession. 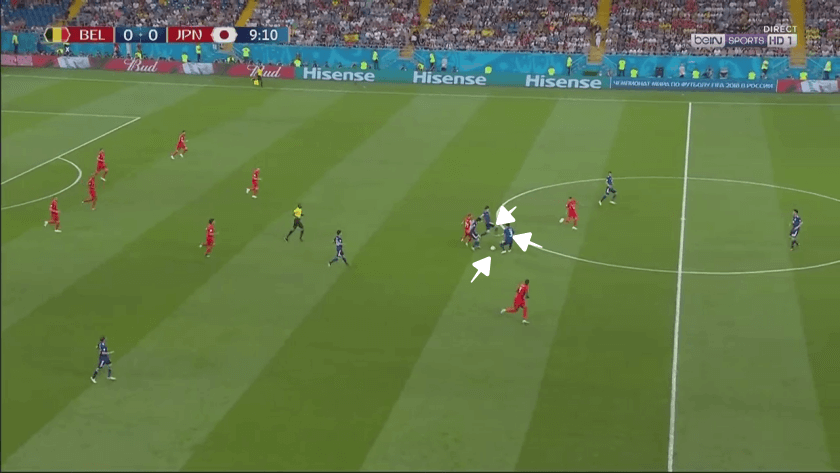 Besides other issues, Belgium could not rely on their quick players in counter-attacks.

Struggling in the first half

The first issue came early in the build-up phase because Belgium showed some problem with progressing up the field. Japan put some energy into pressing the opponent. During this phase, Japan formed in a 4-2-4 shape or sometimes in a 3-2-3-2. 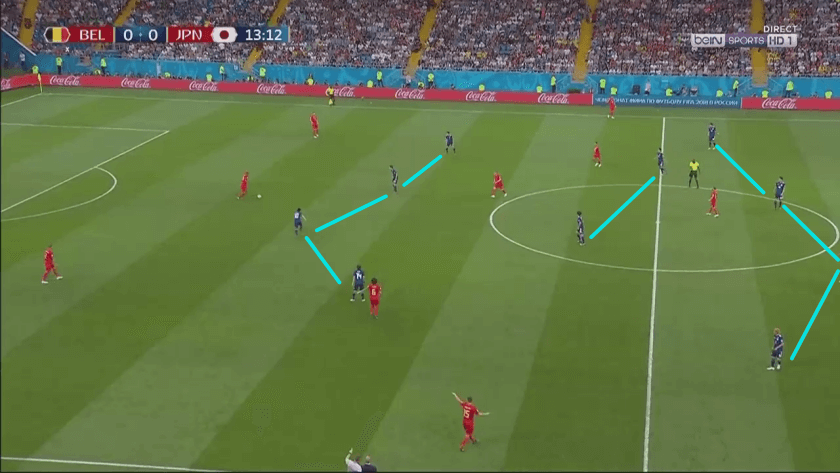 However, the bigger problem came in the final third. Japan made it difficult for the opponent to find a way the goal. When Belgium attempted at the wings Japan shifted to the ball-side and outnumbering the opponent. 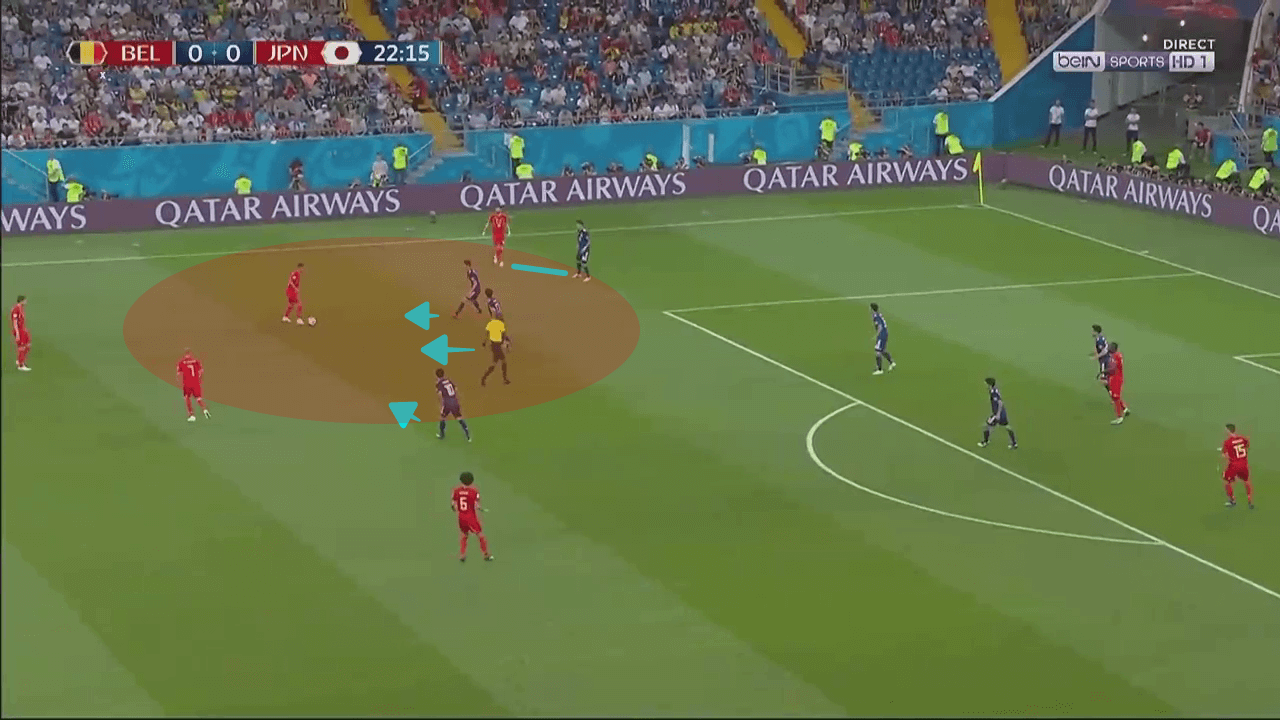 Or in other situations, they defended with a two compact and close defensive line. As you can see below, Japan participated in the box with 7 players, thus it was highly difficult to play the ball precisely to the teammate. 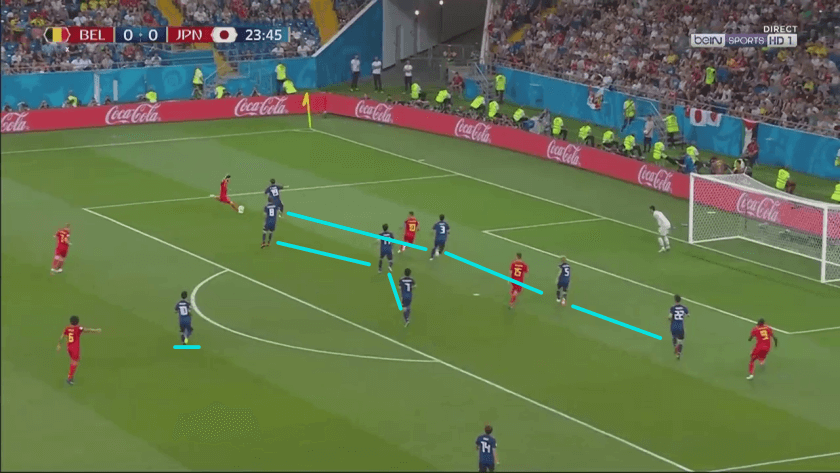 The biggest problem was concentrating. There were many mistakes or errors in the final passes and also the execution of the chances.

After the break Japan came out with the clear intention of winning the match, thus they were really sharp, which ended up with two quick goals. The first one is quite interesting. Japan retain in possession close to their own box, then with a quick transition, they were ably counter-attacking, while Belgium failed to tackle or stop the action. Due to the many players were inside of the Japanese defensive block only 3 defenders were versus the three Japanese players. 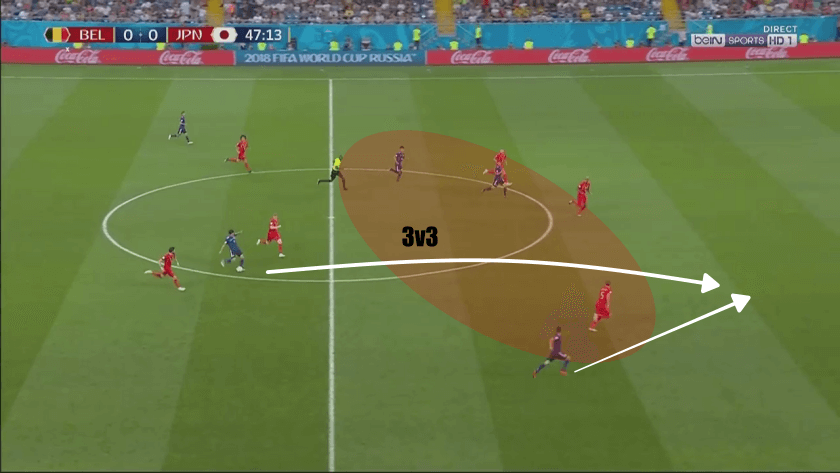 Otherwise, with bigger space behind the Japanese defence, Belgium was able to threaten via a quick attack. Featuring Hazard and Lukaku, which was highly favourable for the Belgian side. 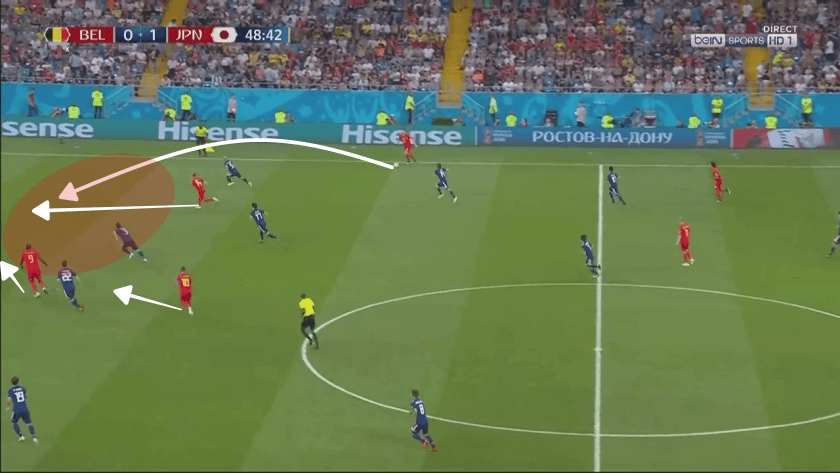 However, the most of the Belgian goals did not happen from counter-attacks, both of them scored from a corner or set pieces. And there is another common element of these two goals. Both happened after the Japanese defence failed to properly clear the ball.

Furthermore, the last goal is also quite interesting. Japan wanted to win the match thus they continued to attack. Then in the last minute, there was a corner where Japan participated with 5 five players as they did earlier in the match, as you can see below. 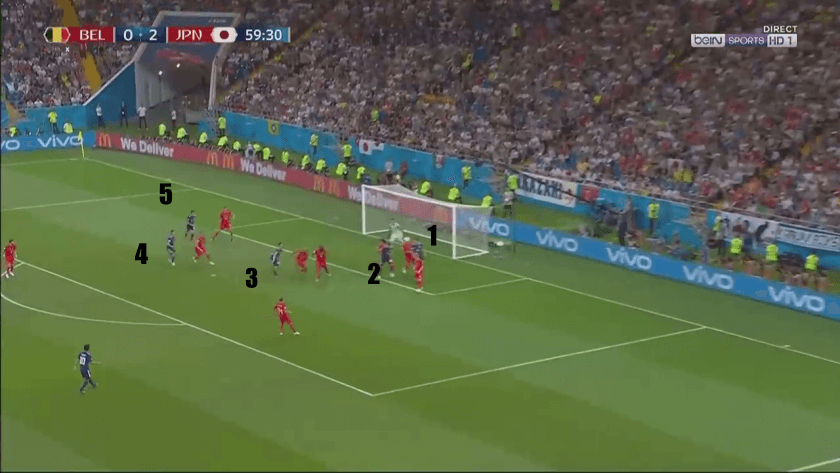 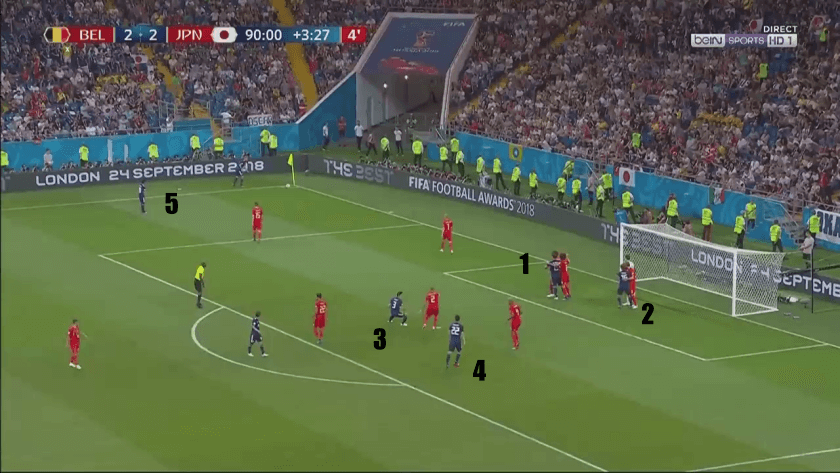 However, the difference came after the corner. While earlier in the second half or in the first half Japan paid attention to stop the opponent’s attempt for counter-attacking, but in the last minute they failed. They left De Bruyne free to advance up the field. There were not any obstacles, just free space. 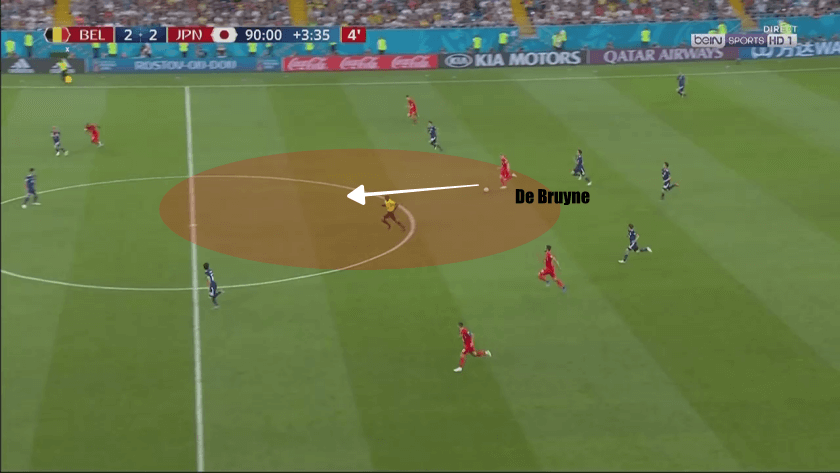 Then there was a key moment when Lukaku changed direction and run towards the centre in order to drag his marker away. This allowed De Bruyne to find the best passing option in Meunier, who had huge space in front of him. 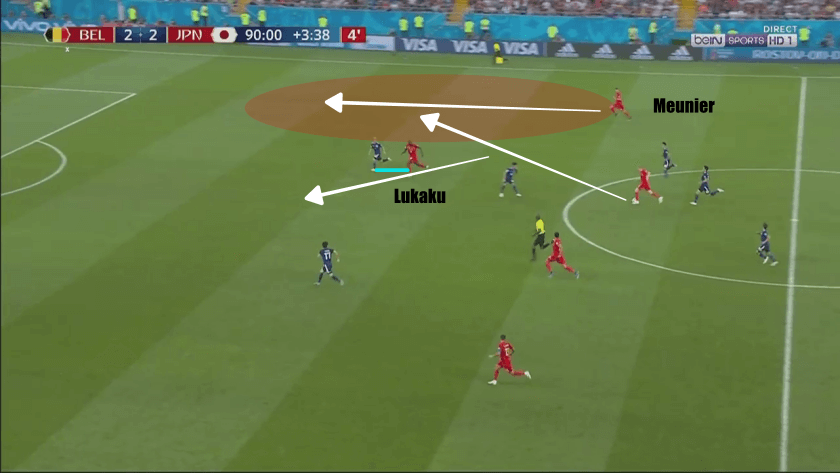 It was an interesting battle between Japan and Belgium. Moreover, Japan made an impressive performance. On the other hand, Roberto Martinez’s man got a huge boost from this win, which can help later. Although they have learned from this match, especially from the mistakes. The next stop will be in the quarterfinal against Brazil.