Will the golden generation of Belgian football reach their predestination?

Everyone agreed at one point, this is the best squad in the Belgian football. That’s for sure. It’s not just a natural mistake that The Red Devils is at third place at FIFA rank.

There is remarkable quality in every segment, starting with Thibaut Courtois in goal. Jan Vertonghen and Toby Alderweireld are among the best defenders in the Premier League. Mousa Dembele is supreme in central midfield.

Kevin De Bruyne is one of the best playmakers in the world, the brightest star at all-conquering Manchester City. Hazard and Dries Mertens are outstanding wingers, with the latter starring as a centre-forward at Napoli in the last two seasons. Lukaku is one of the most powerful and prolific strikers in the Premier League. Martinez can pick a truly magnificent and experienced world-class lineup in every department, meaning they must be considered legitimate contenders to win the whole thing. At least on paper.

Appointed in August 2016 with a contract running to the end of 2018. Roberto Martinez replaced Marc Wilmots after the disappointing performance against Wales at EURO 2016. The Red Devils knocked out at quarter-finals. However,  Martinez has just signed a two-year contract extension with Belgium, right before the World Cup, which means that the Belgian Association really trust him. He will stay as national coach until Euro 2020.

However, it did not mention former Arsenal striker Thierry Henry, who has been working as part of Martinez’s staff but is reportedly tempted to take a more senior coaching role at a club.

Martinez was something of a surprise choice as the Royal Belgian Football Association had wanted a coach with more international experience and tactical knowledge. Although his continental involvement was limited to an Everton run in the Europa League,  so he still hasn’t the biggest experience. On the plus side, he has comprehensive knowledge of the Premier League, which is home to half of the Belgian squad, and led Wigan Athletic to FA Cup success in 2013.

Belgium also affected with the three at the back trend, which conquered the perfidious Albion. In this case, this change was a highly reasonable move from Roberto Martinez. There is no decent natural left-back in the squad, which is one of the reasons behind the switch to the 3-4-2-1 or 3-4-3 system. In this formation the two wingers or wingbacks – probably Meunier and Carrasco – have huge role due to the space beside the side-backs, they have to drop back to close down the wings.

So, when it comes to defence they formed a 5-4-1 shape. With two narrow and close defensive line. 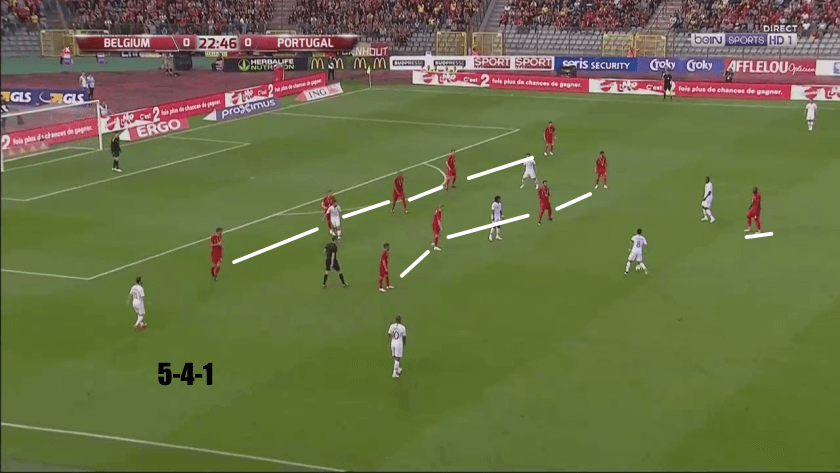 At the build-up phase the two centre midfielder stay close to each other, but when they reach the opponent’s half De Bruyne step forward to provide a passing option, whilst Witsel stay deeper. 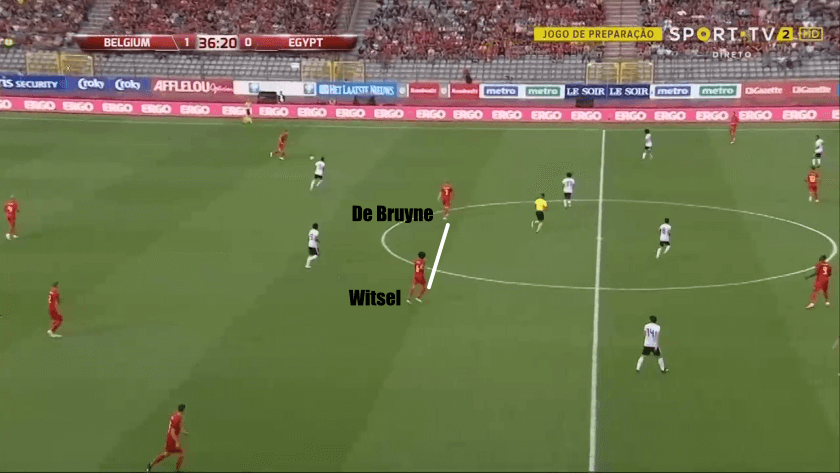 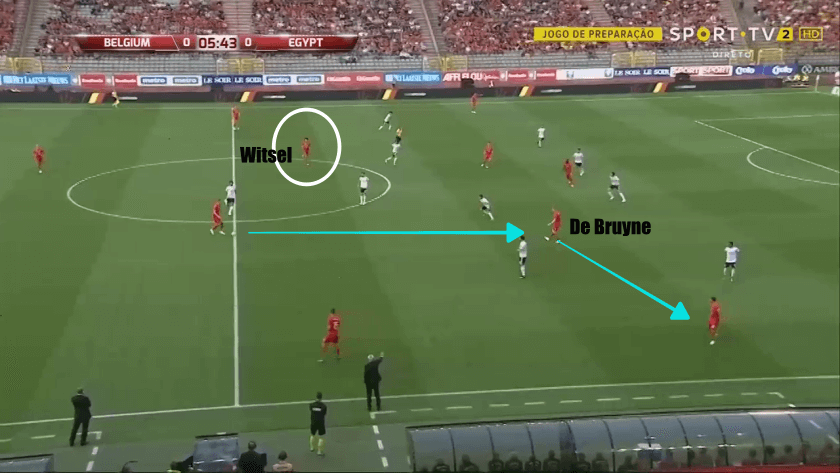 However, De Bruyne have to drop too deep to help the ball circulation. Martinez relies on the Alderweireld, Vertonghen and Company passing ability, but also often use De Bruyne as a deep-lying playmaker. Thus usually he plays in a deeper role, than in his club, which can be a reason why he couldn’t shining as he does in Manchester City.

Mertens and Hazard also have a different role compare to what they playing in their club. Under Martinez, they stay narrow and act in the half space. Let Meunier and Carrasco responsible for the wings. 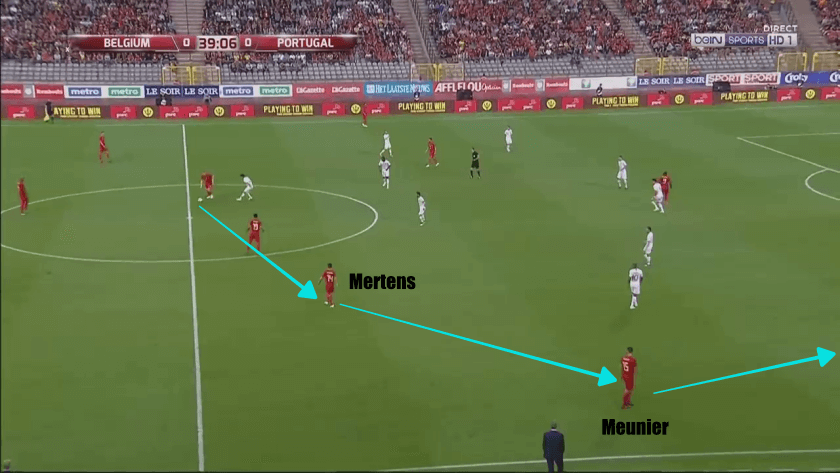 Lukaku, Hazard, Mertens, De Bruyne in the centre area allow them to play in a combinative fashion. And they aim to play that style. They look for each other to makes some combination, some link-up play. 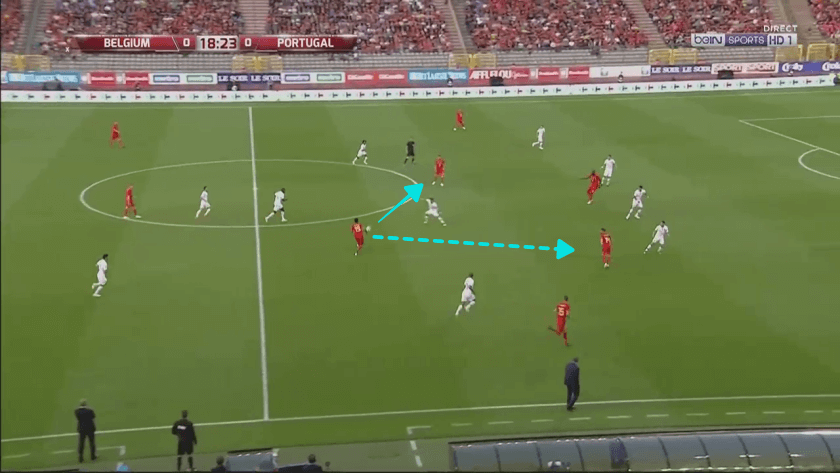 Lukaku as a lone striker at the top. His ability to keep the ball and play into space to the fast wingers, will mean a lot to the Belgian squad. He had a great season with Manchester United, 27 goals in all competitions and 9 assists. Thus he will definitely one of the players, who can rely on.

Usually, the performance at the tournaments depends on the players’ current form and the level of team spirit. The most valuable player De Bruyne played 52 matches in this season, Hazard follows him with 51 matches, then comes Lukaku with 50 matches. Thus they had a tiring season, which makes harder for the coach to shape them up. They really need their key players to be sharp. Besides this task, Roberto Martinez also has to work on the team’s atmosphere. Forge them into one collective, hungry and humble group.

In overall, the biggest weak point of the Red Devils is lack of winning mentality. Thus they still do not believe in their ability to turn dreams into reality. The gold medals tend to go to traditional forces at the World Cup, and Belgium is not one of them. Can they go all the way?

Eden Hazard and Kevin de Bruyne are the top dogs, with Hazard captaining the side and receiving far more freedom under Martinez. But De Bruyne has rarely reproduced his club form and remains an international enigma. Otherwise, this can be the perfect time to stand up and lead his national team to the glory.

He has enjoyed the best season of his career at Manchester City, scoring twelve goals, providing 16 assists and delivering countless other defence-splitting passes that led to goals and scoring opportunities but are not considered assists. Very few players in the world possess the Belgian’s vision, and he is definitely one of the most pleasant players to watch. With an awesome performance at the World Cup, he can become a legitimate contender for Ballon d’Or as well. The biggest question is whether is capable of becoming a true leader for Belgium.

Youri Tielemans: The 21 years old midfielder after went through all the ladder in Anderlecht, joined the Ligue 1 with Monaco in this season. He played in 34 matches during the season, 26 matches in the championship and participated in four matches in the Champions League. However, he has to get comfortable with the new circumstances in the bigger league, but he is still in the early stage of his development. We have seen lots of youth, who bombed the World Cups. He can be worth to pay attention during the Mundial.

Yannick Carrasco: The young and talented winger definitely has potential and can be the player, who come from nowhere as a storm and fly his team to the final. However, we can’t predict which form will be shown during the tournament because he is a controversial player. He just 24 years old and already have left the European football and joined the Chinese team, Yifang. Despite this, he has got the x-factor.

The Red Devils will be in the Group G, which also included Panama, Tunisia and England. They will begin the World Cup against Panama at 18th of June. Next opponent will be Tunisia, at 23rd of June and lastly, they will face the Three Lions. Belgium should make it into the last 16 without problems, beating Panama and Tunisia. So, the only real rival will be England at the group stage.

If they finish ahead of England and the top of the Group G, Brazil could await them in the quarterfinals. If they finish second behind the Three Lions, they are likely to meet Germany in the quarterfinals. That hurdle will be high and it is logical to predict that the Belgians would finish at that point, just like in 2014 and 2016. If they manage to overcome that hurdle, though, they could win the tournament.

Although, for achieving that is a low chance. It seems to me their only viable chance is to win their group and get Brazil in the knockout phase.