The moans and groans of the most optimistic England supporter are being heard loud and clear with many focusing on the lack of creativity in England’s midfield. Many are bemoaning the lack of experience in Ruben Loftus Cheek (Crystal Palace), Harry Maguire (Leicester City) and Jesse Lingard (Manchester United) but they are the same supporters who criticised Roy Hodgson for not taking a chance on English youngsters.

The scenario is very similar to before one of England’s most successful tournament in recent history Euro 96. Alan Shearer hadn’t scored an international goal in two years and many questioned the inclusion of Gary Neville, Phil Neville and Sol Campbell. History speaks for itself and with Gareth Southgate being a key player in that squad there is no reason not to be encouraged by this young England team

This is the third youngest squad England have ever taken to a tournament with Gary Cahill (Chelsea) providing some tournament experience to the promising group of young players. Starting in goal Jordan Pickford (Everton) is likely to be first choice with Jack Butland (Stoke) providing close competition. Pickford’s fine distribution will be key to England’s DNA which has been established over the past few years of controlling possession and games.

In front of Pickford, Gareth Southgate will deploy ball-playing centre-backs which will suit the style of John Stones (Manchester City) perfectly who during the early part of Manchester City’s triumphant title season was key to imprinting Pep Guardiola’s style. Each side of the three centre back’s Gareth Southgate has his closest selection headache. Wing backs will be crucial to England’s formation and Trent Alexander Arnold’s (Liverpool) form taking him to a Champions League final could just pip Kieran Trippier (Tottenham) who has performed well in warm-up games.

In central midfield Eric Dier (Tottenham) will likely be deployed alongside potential captain Jordan Henderson providing protection and looking to retain possession. Other options include the creative spark of Ruben Loftus-Cheek (Crystal Palace) and Dele Alli (Tottenham), who is likely to play further forward in the number 10 role with one of Raheem Sterling (Manchester City) or Jesse Lingard (Manchester United).

That leaves England’s talisman Harry Kane (Tottenham Hotspur) fresh of a 30 goal Premier League season to lead the front line with Jamie Vardy (Leicester City) providing back up and in certain games could be deployed as a defensive forward to nullify any build up play. 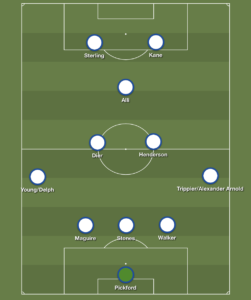 England’s go to formation will be 3-5-2, replicating Terry Venable’s famous Christmas tree formation during the Euro 96. Gareth Southgate will be flexible and may even adapt the formation to be a 3-4-3 allowing Dele Alli and Raheem Sterling to play alongside Harry Kane in a fluid front three with the width being provided by wing backs ahead of the ball playing back three.

The biggest challenge for Gareth Southgate is not how England will control possession but how they will provide penetrative passes to get chances for the ever-green Harry Kane and Raheem Sterling. Dele Alli can provide that creative spark but if the transitions from defence to midfield are slow, he may not receive the ball quick enough to provide the required service.

England did experience victory over the Netherlands in March using a 3-5-2 with Jesse Lingard popping up with the winner. However, the Netherlands has failed to qualify for the last two major tournaments and whilst it was a promising showing, there is a lot of tactical work needed to ensure against the big oppositions of Germany, France or Brazil that we convert possession into victories.

The obvious player to watch would be Harry Kane, but the whole world including Real Madrid will be watching his performances, instead focusing on Raheem Sterling. Raheem Sterling showed terrific potential during the Liverpool title challenge 2013/14 creating a fearsome trio with Luis Suarez and Daniel Sturridge. Since then, he has moved to Manchester City in a transfer worth £49 million and is now under the guidance of Pep Guardiola. The winger turned striker is playing in a front three as an inside forward and has made a significant contribution to Manchester City’s record-breaking title season with 18 goals and 10 assists as the champions amassed 100 points.

Over recent seasons Sterling has built on his outstanding pace with the composure to finish one on one and also lay on assists for his teammates, this game intelligence will be key to an England success and also getting the best out of Harry Kane. Sterling will likely be deployed in his favourite position in a flexible front three with Harry Kane and Raheem Sterling and this familiarity with Guardiola’s formation could provide the catalyst to a great World Cup.

Playing week in week out in the Premier League can sometimes age people before their time and not many would have considered Dele Alli to be a young player to watch with him being a regular in the Tottenham Hotspur and England line up over the past two to three seasons. However, we tend to forget that Dele is only 22 years old and has a big point to prove on the world stage. His stand out moment this season was his two goals against Chelsea which highlighted his technique, flair and goal-scoring ability. However, after an impressive previous campaign of 18 goals and 7 assists in 37 games everyone expected him to kick on but instead, he ended this season with 9 goals and 9 assists. That is still an impressive return but the three lions will be hoping Dele’s form continues to improve in the World Cup and that he can take his partnership with Harry Kane from club to country level.

Only an avid Liverpool supporter would have known about Trent Alexander Arnold at the beginning of the season or maybe a keen Football Manager player. However, since the turn of the year, he has set the Premier League alight with assured defensive displays backed up by sensational crossing ability. At 19 years of age and in his first full season in the first team, he is due to start in the Champions League final against Real Madrid, if it was not for his age he would be a certain starter in the England team on that alone. He is yet to make an England senior appearance but after being converted from a central midfielder (in the junior ranks) his attacking abilities will provide a perfect option for Gareth Southgate at right wing back. Alexander-Arnold produced the 4th most crosses per 90 mins of any other player in the Premier League and with the aerial dominance of Harry Kane that has to be an attractive factor when Gareth Southgate picks his first XI against Tunisia.