Tunisia are back for their first World Cup since 2006. The Eagles of Carthage have never made it out of the group stage and it doesn’t look likely at their fifth attempt. They had enough of a challenge being drawn against England and Belgium even before the loss of star man Youssef Msakni to injury. Even the match order is working against them.

Progressing to the last sixteen is likely to be beyond them, however they will hoping to add to their sole victory against Mexico at the 1978 World Cup in their final game against Panama.

Pole Henryk Kasperczak was replaced after his second spell in charge by Maaloul after being knocked out in the quarter-finals of the 2017 African Cup of Nations. Maaloul was a midfielder for the country back in the eighties and nineties, earning 74 caps, and has been involved in the set-up previously, even managing them for seven games in 2013.

Under his stewardship Tunisia finished top of a group containing Guinea, Libya and DR Congo undefeated to seal their place in Russia. This success makes him the second Tunisian coach to qualify for the World Cup – the first being Abdelmajid Chetali back in 1978.

Maaloul generally prefers to play with a 4-2-3-1, however, he has been known to change to a 4-3-3 to shore up the midfield against stronger opponents. With talisman Youssef Msakni missing the tournament due to an injury to his knee ligaments and two tough group matches, the latter seems more likely.

Looking primarily not to concede goals, the back-line sits quite deep and is protected by hard-working ball-winners Mohamed Amine Ben Amor and Ferjani Sassi, while the attacking midfielders are all expected to track back. The defenders are expected not to rush into challenges, but instead stand up their opponents, stop them from turning and wait for reinforcements, with the deepest midfielder dropping into the back-line to fill in any gaps if they get dragged out of position (this seems to be very important as Tunisia do seem to have a tendency to concede goals from crosses where the attacker has popped up in the gap between two defenders, so limiting this space is a must). Portugal also showed that the back-line can really struggle against pacey attackers. 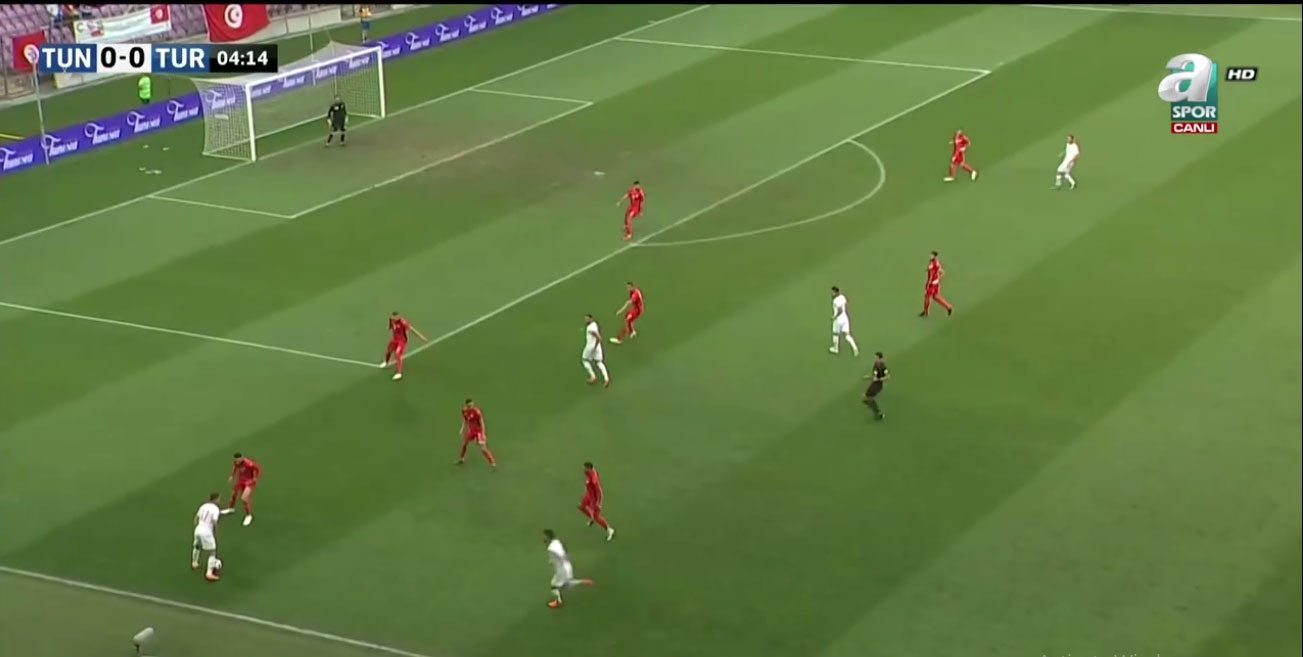 The midfielders ahead of them defend with man orientations, tending to stick close to their opposite number in midfield and deny them space. 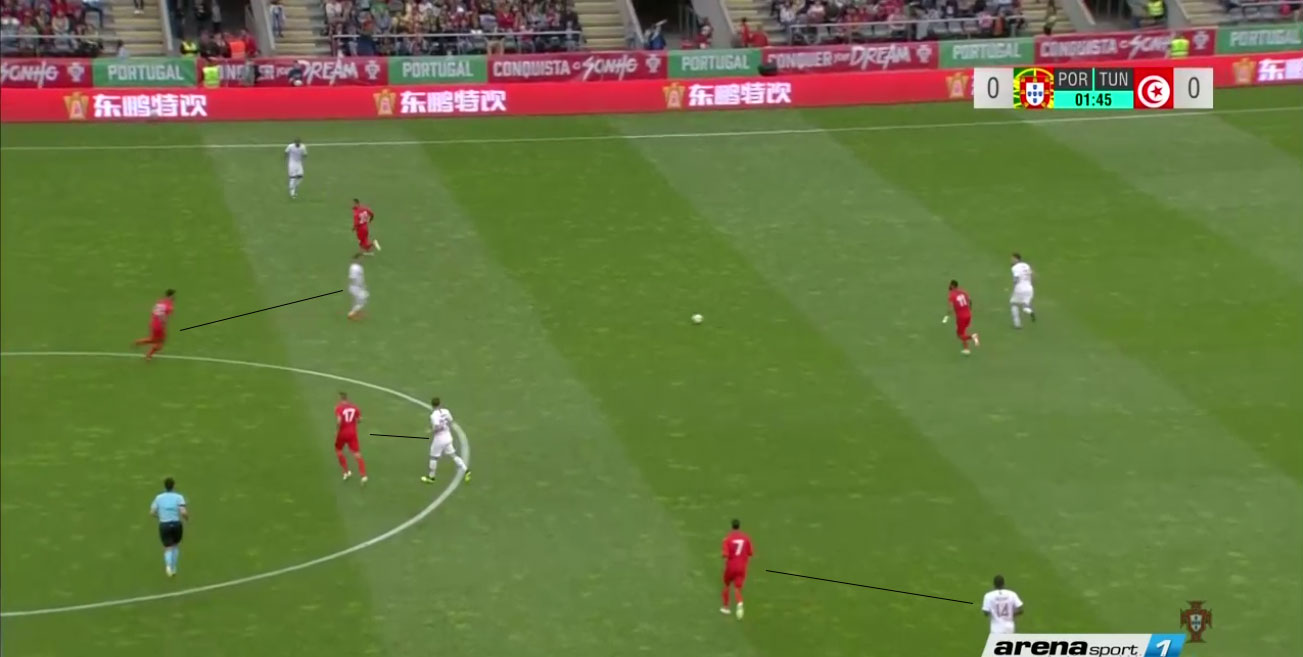 However this can backfire, as sticking close to their opposite number can see them dragged far away from one another. This lack of compactness can open up large gaps to play straight through them and they apply little pressure to the opposition defenders, giving them lots of time and space to pick out these passes. 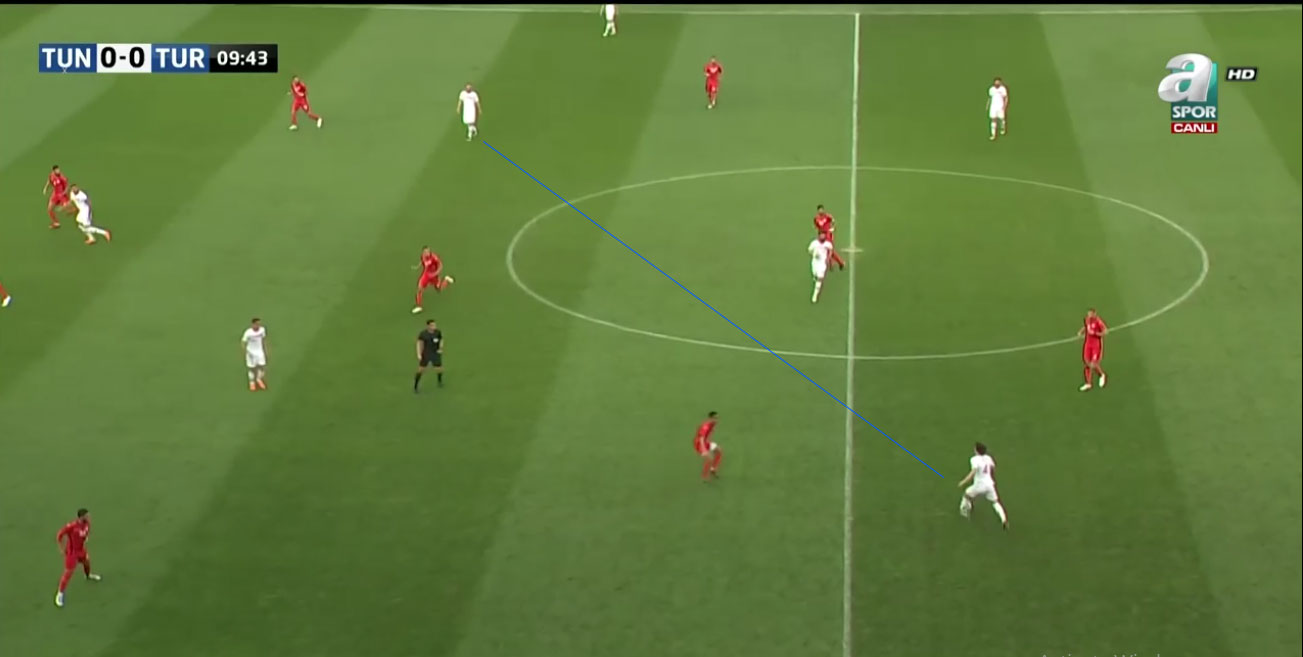 The make-up of the midfield is still unsure. Sassi is likely to start and Ben Amor looks to be fit after suffering with an injury but the third man is still unknown: Ghaylene Chaalali was often used as another defensive option but has also been struggling with an injury, Ellyes Skhiri has filled in during his and Ben Amor’s absence, while Saif-Eddine Khaoui is less defensive-minded, which could have both positive and negative consequences for a side needing discipline but lacking an attacking threat.

When attacking Tunisia patiently pass the ball short to work their way up the pitch towards their most talented attackers, before trying to quickly burst through in the final third. Although usually neat in their passing, the defenders and goalkeeper can panic when put under pressure, giving the ball away easily on the edge of their box. Dylann Bronn or Hamdi Nagguez at right-back tend to not get too far forward, but Ali Maaloul will scamper all the way down the left flank, maintaining the width as Naim Sliti cuts inside.

An injury to Taha Yassine Khenissi has also left Tunisia without a definite striker. Fakhreddine Ben Youssef and Saber Khalifa are unlikely to cause much trouble and Anice Badri is more technically gifted but his poor movement gives away that he’s not a proper number nine. Tunisia were likely to struggle in attack even before the injuries so their success in Russia is more likely to depend on their defence, while hoping that Sliti and Wahbi Khazri can provide some magic.

Tunisia don’t offer much tactical interest but that may also be one of their greater strengths – they are primarily hard-working and well-organised, with a simple gameplan based on protecting their defence. They won’t entertain but they might be able to frustrate England and Belgium.

With Msakni missing, Tunisia will be reliant on Khazri for creativity in Russia. Although more suited to playing through the middle, the likely shift to a 4-3-3 means the French-born attacker will probably play from the right, although there is an outside chance he may start up front.

He rarely showed it at Sunderland (but then who did?) however he’s known in France for his excellent dribbling skills and low centre of gravity despite standing at six foot tall. He can have a tendency to slow down an attack, but he can easily twist and turn his way away from multiple defenders to progress the ball forward. His ability to hold off pressure and keep the ball is likely to offer welcome respite for a Tunisia side likely to spend long periods without the ball, although his creativity may only really pose a threat from set-pieces.

There really isn’t a great deal to choose from here. There’s few young players in the squad and those that are there are unlikely to make the first eleven. Khaoui looks the best of the lot and there’s a chance he might get the nod in midfield to add a bit more technical quality to the hard-running ball-winning shield.

The 23 year-old has spent the last year on loan at Troyes from Marseille – one of several French-born players recruited to the squad for the World Cup – and got starts in both the Portugal and Turkey friendlies. Although an attacking midfielder, he doesn’t offer a great deal in his passing or possess much drive with the ball, preferring to simply move the ball on neatly with a short pass.

It’s his movement off-the-ball that tends to stand out. Khaoui has a habit of ghosting into positions un-tracked to get a shot at goal, shooting first time to ensure he can’t get closed down. He will also look to pick up the ball between the lines, ensuring the passing lanes to him are open for the midfielders behind him by standing in the gaps between the midfielders, however he’s happy to drop deeper alongside them to pick up the ball if needs be.

While Khazri is the main creative force in Msakni’s absence, Sliti is a close second. The Marseille-born attacker has spent the season on loan at Dijon from Lille and is likely to start on the left wing for Tunisia.

Whereas Khazri can be slow on the ball, Sliti is quick and direct. He will pick up the ball and drive straight at defenders, keeping the ball close to him and throwing in a few feints to draw defenders in before offloading the ball again quickly. Cutting inside on his right foot, he also provides a threat going through the middle that is lacking in Tunisia’s lacklustre striking options.