This summer, Russia will be playing host to some of the globe’s best players. Out of South America there is Lionel Messi and Neymar. Europe has put forth the likes of Kevin De Bruyne, Thomas Müller, and Cristiano Ronaldo. Even the likes of Africa and Asia – perennial underdogs – will be represented by Mohamed Salah, Sadio Mané, and Heung Min-Son. CONCACAF, encapsulating all of North America, Central America, and the Caribbean, has often struggled to produce star players that compete on the world stage.

With no United States or Canada at the 2018 World Cup, the entire burden of North American success lies upon the backs of the Mexican National Team players. El Tri have reached the Quarter-finals twice, both times as the host nation (1970, 1986). However, the Mexicans have been cut off at the Round of 16 for the past six consecutive World Cups, unable to take the next step and usurp their predecessors’ accomplishments.

Juan Carlos Osorio’s squad has been drawn in Group F – dubbed by SI’s Daniel Rapaport as the most balanced group in Russia – and will face off against title holders Germany, Sweden, and South Korea. Whereas veterans like Andrés Guardado, Carlos Vela, and Chicharito will certainly play a large role in Mexico’s success or failure this summer, a new kid has popped up on the scene in recent years. Enter Hirving Lozano: the most exciting player at the World Cup from the Dutch Eredivisie and Mexico’s new hope.

PSV Eindhoven’s Eredivisie win has been the culmination of frequent dominance and occasional luck, but one thing that’s undeniable is their persistence. Hirving Lozano is an integral part of this highly-functional, extremely athletic unit. He wasn’t anointed as the Eredivisie player of the season, but his contribution has clearly played a massive part in PSV’s title-winning efforts.

Hirving Lozano’s output of 17 goals and 8 assists in the Dutch top league underlines a phenomenal debut season abroad for the Mexican. Having moved from Pachuca last summer, the 22-year-old was a starlet in the PSV attack from day one. His startling pace and superb on-the-ball technique have terrified opposing managers who attempt to draw up ways to defend against him. Goalkeepers often failed to parry his rippling long shots. But what makes Lozano truly exceptional?

Built for a Fluid Attack

Throughout the season, Hirving Lozano has played in a variety of roles. The right-footed Mexican opened his Dutch account as a seemingly natural left-winger, but his position has shifted to right-wing and even striker on some occasions. PSV play a relatively fluid attacking system, meaning that Hirving will sometimes start on the left and float out to the right, and vice-versa. 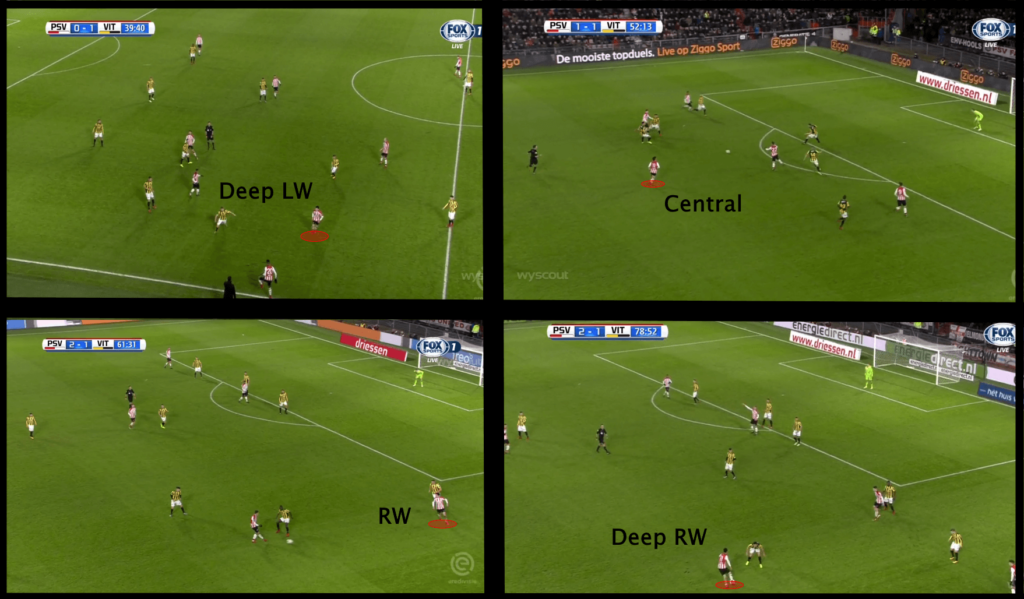 In a match against Vitesse, Lozano displayed his pension for roaming around when PSV control the ball. He would often be found starting wide left or right before roaming inside or dropping deep to receive a pass. Not only is this difficult for defences to keep track of, but it’s certainly a benefit for PSV when their attacks become stale and fruitless. Different positioning almost definitely creates different passing patterns.

The main reason Philip Cocu positioned Lozano on the left at the start of the season is because of his technical prowess. The casual fan thinks of Hirving as a speed-demon, which is true, but that’s only one part of his game. Lozano is phenomenal at finessing out of pressure when trapped in tight spaces. 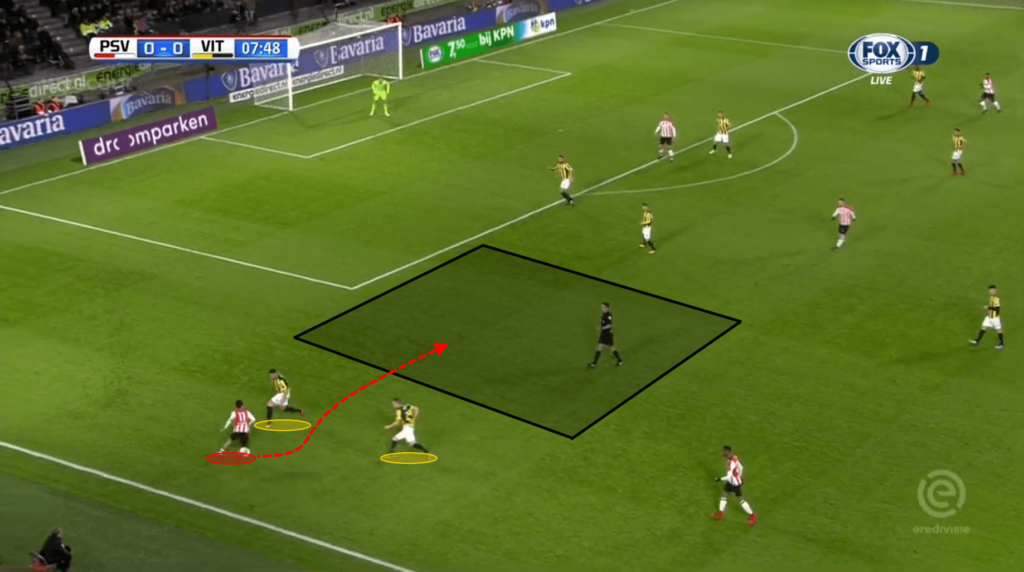 Above, Lozano is trapped by two players: Vitesse’s centre-back and right-wing-back. Since the Mexican has drawn out an opposing central defender, there is a lot of space to exploit in the left half-space. Lozano’s teammates allow him to isolate his markers to do just this; PSV’s left-back, striker, and central midfielder aren’t closing down his space, but instead waiting for Hirving to make a move himself. Note also that his quick acceleration is a superb supplement to his good dribbling ability, making it difficult for defenders to tackle him.

Lozano completed 2.3 dribbles per 90 with a 56% success rate – by all means excellent – but pales in comparison to his teammate Steven Bergwijn (3 d/90, 64%), per WhoScored. What we can confer from this statistic is that, while Lozano is phenomenal on the ball, he has a lot of room to improve. Everyone knows the Eredivisie defenders lack prowess compared to larger European leagues and Lozano may find it difficult to adapt to a league like the Bundesliga or Premier League. 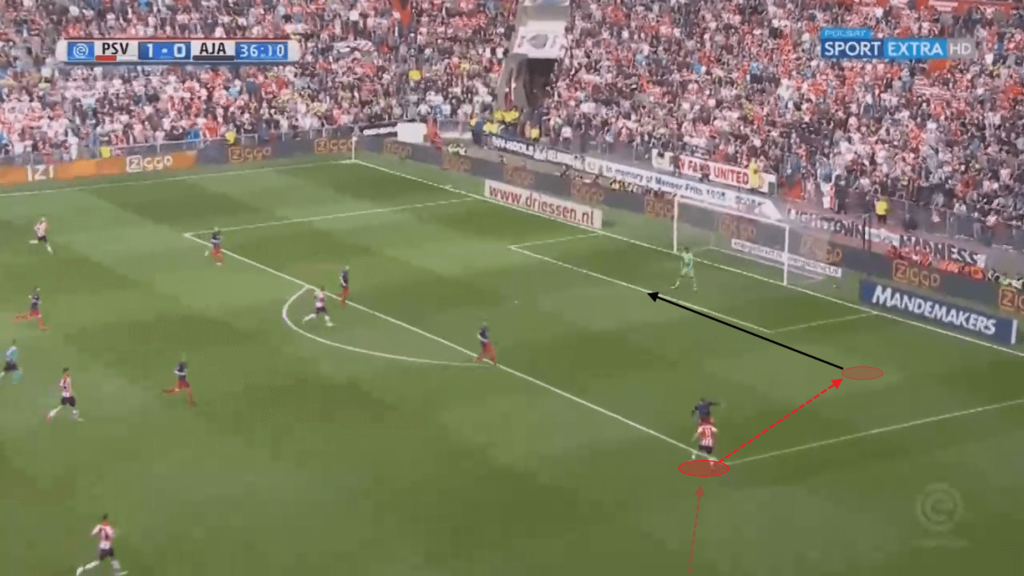 When on the right, Hirving Lozano still uses his acceleration and dribbling to beat defenders. Since he favours his right foot, most of his actions involve cutting out wide so he can shoot or cross with his strong foot. Above, again his PSV teammates clear out room for him to operate and he takes full advantage by beating his marker inside the box. This opens up space for him to make a low cross to teammates arriving in the box. This is part of the reason Lozano completes 2.6 accurate crosses per 90 minutes at a success rate of 34%.

Jack of all Trades

Despite it being his first year in Holland, Lozano has taken up a significant role at PSV. Not only is he tasked with being the side’s primary creator, but his goal scoring and defensive contribution is extremely important to the Dutch champions as well. The Mexican international scored 0.7 goals per 90 in the Eredivisie, while at the same time accumulating 2.9 key passes, 0.4 interceptions and 1.2 tackles (WhoScored). It’s clear not only from the stats but also from the eye test that Lozano’s impact on PSV’s success is immense.

I mentioned previously Hirving Lozano’s versatility; this free-flowing attacking movement allows him to find space on the counter-attack and during slower build-up play, either to beat his man off the dribble or score himself. Below, his supreme off the ball movement in a central position emulates that of a seasoned poacher. He feints right, confusing the defender, and cuts left to receive a low cross for a tap-in (although he was whistled for a foul). With forward Luuk de Jong’s poor luck early in the season, it was imperative that Lozano take on a larger burden of the scoring duties. 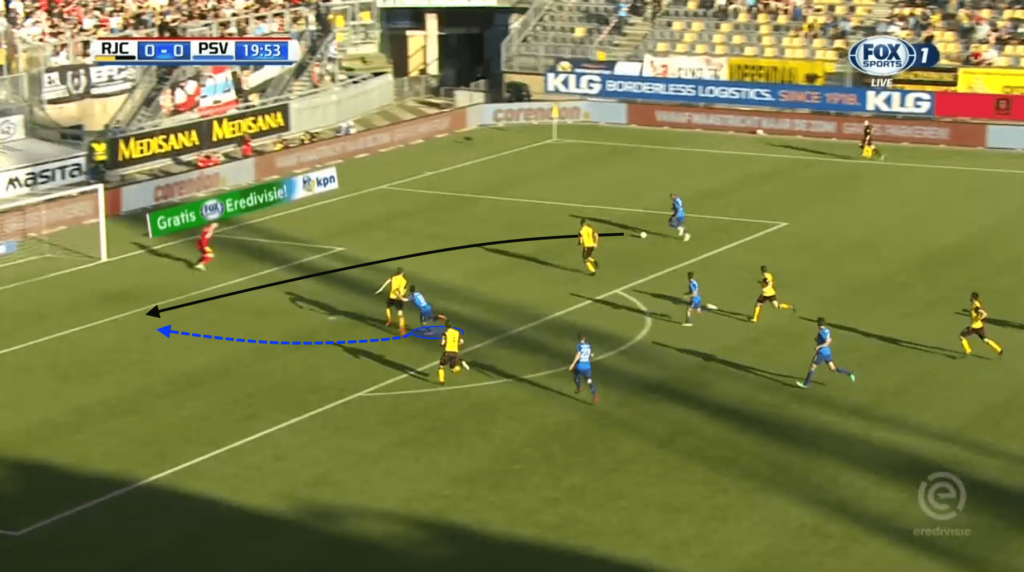 Speaking of scoring, Lozano is one of the best wide men if you’re looking for goals. An exemplary 47% of his shots were on target, largely due to his movement inside the box. He was the Eredivisie winger with the most shots inside the penalty box last season, taking 2.1 of his 3.8 shots per 90 inside in close proximity to the goal.

Lozano’s defensive duties shouldn’t go unnoticed either. Whereas PSV like to induce chaos in the opposition’s buildup – especially that of weaker teams – they don’t often form a coherent and organised pressing system. Lozano makes up for this with his efforts off the ball when out of possession. 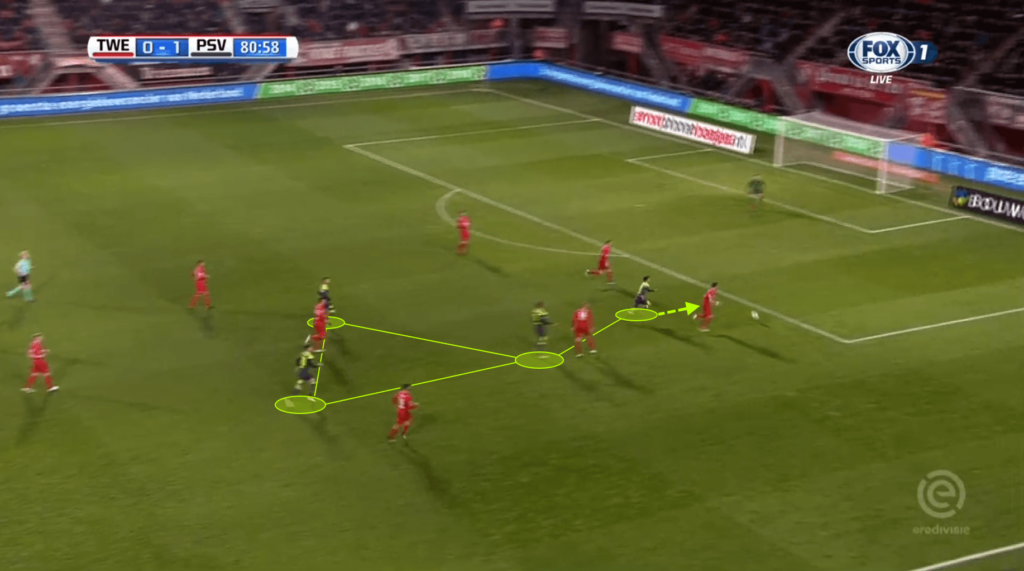 Supplemented by his fantastic speed and hunger for the ball, “Chucky” performs a lot of extra pressing when his teammates are satisfied with sitting back. Above, a misplaced lobbed ball is clearly going to be won by the Twente defender. However, even though his midfield and attacking partners organise themselves to defend, Lozano breaks rank and chases after the ball. He is whistled for a foul (more on that later), but his effort stopped the opposition from beginning their buildup play. Often times, Lozano’s pressing forces defenders and goalkeepers to clear the ball long, allowing PSV to win the ball back quickly.

Chucky Lozano is quite well-rounded considering especially his young age. His speed, passing, and on-the-ball ability makes him a phenomenal player on either flank. However, like all players, Lozano has his “needs improvement” traits. His finishing does sometimes go amiss, and often times his shots are rushed while cutting inside. I mentioned his great on-target percentage, but this is mostly down to his positioning close to goal when taking shots. Outside the box, it’s hit or miss for the Mexican.

The most noticeable weakness in Hirving’s game – personality, more like – is his temper. Lozano was red carded twice in the Eredivisie, both for horribly timed challenges that seriously risked the health of the other player. His aggressiveness when pressing is certainly an asset at times, but it can get out of hand if his team is underperforming and Lozano feels the pressure to win the ball back quickly. I wouldn’t be surprised if Mexico find themselves without their #8 in a high-stakes match this summer.

Thus far, I’ve covered Lozano’s setup in PSV Eindhoven’s tactics. The Mexican is a star for El Tri, though, and will likely play a large role in this summer’s World Cup. He plays a similar role for the Mexican national side, often starting on the left but drifting to the right sometimes. Mexico are certainly a counter-attacking side and the speedy Lozano is a huge asset in this high-tempo style. 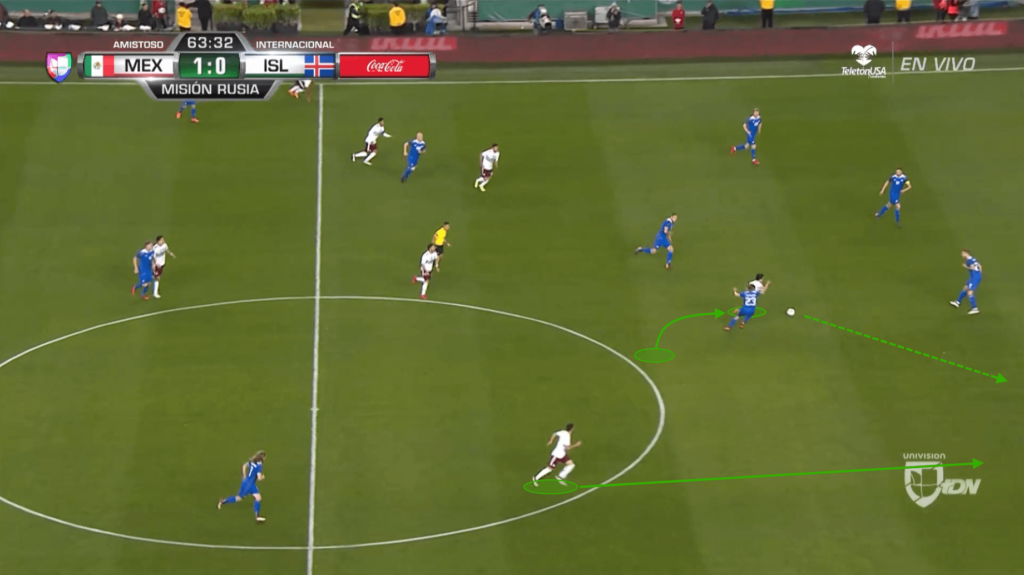 Above, Mexico take on Iceland with a quick counter. Lozano receives a pass in the central area of the pitch, having cut inside from the right, and quickly dribbles around his marker. Chucky has the vision and ability to pick out his overlapping teammate on the right with a through-ball that splits the defenders. Even when he’s out wide, Lozano is a central focus for the Mexicans.

Chucky Lozano is a hot commodity after leading PSV to the Dutch title this season. At only 22, Hirving has plenty of time to showcase his skills on the world stage. Whether he remains at PSV for another season of development is questionable, but we do know that he will do everything in his power to lead Mexico to World Cup glory this week. We could be witnessing the early stages of a legendary career. 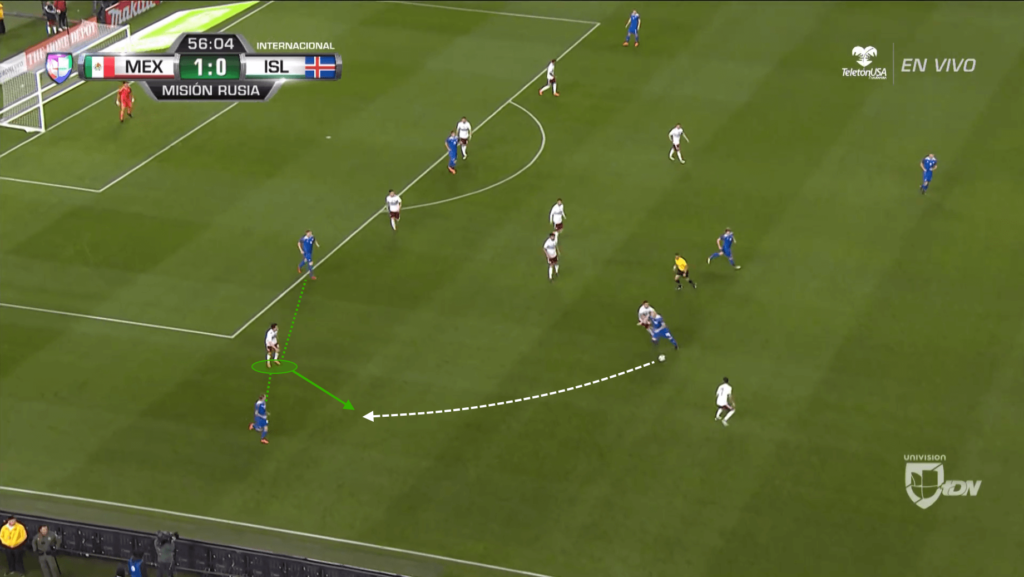 In the same match, Lozano put his work rate on display by solidly defending as a pseudo-right-back. He found the right flank to be uncovered and made sure to hedge his positioning between Iceland’s forward and winger, while keeping his focus on the ball carrier. If Mexico advance into the knockout rounds, Lozano will surely be tasked with helping out El Tri’s leaky defence.

To read more about Mexico’s tactics in this year’s World Cup, look no further than Tobias Hahn’s analysis.