Mexico could become one of the most interesting teams of the tournament. They have a lot of interesting players in their squad, compared to other nations from America, a high number of players from the Mexican squad even play in Mexico so far. After losing in the Gold Cup in the semi-final last year against Jamaica and in the semi-final at the Confederations Cup against Germany, they want to play a successful tournament this year as well. The first game against Germany is quite likely the most important. In a group with them, Sweden and South-Korea Mexico is the favourite to reach the next round as the second placed team. The problem is, when they would reach the second place in their group, their opponent in the next round most likely would be Brazil.

So, winning against Germany is a big challenge but not that unrealistic due to their playing style which could be uncomfortable for the possession game of Germany. Mexico´s coach developed a strong team over the last years.

Osorio started to coach Mexico in 2015. With him as a coach, Mexico stands for offensive football with quick flat combinations and a focus on dominating the game. He installed a well-structured positional play at Mexico. Not only does he use a lot of different formations he also experiments with player positions. A lot of the Mexican players play in different positions with the national-team because Osorio wants to have a flexible squad in order to change formations during the game. Furthermore, a lot of rotations during possession are only possible if all players can play multiple positions.

From a tactical standpoint, Mexico is one of the most interesting teams in that World Cup. Juan Carlos Osorio is known for using the concept of the positional play. At the Mexican national team, he installed different formations and systems which help his team to dominate the game. Usually, Mexico uses a 3-4-3 formation which gives them a lot of diagonal passing options and creates a connected shape in possession while overloading the centre. Besides the 3-4-3, Osorio sometimes lines-up his team in a 4-3-3 or 4-2-3-1. However, the formation is not that important, in possession the Mexican players move a lot and switch positions. The constant flow during possession makes it hard for the opponents to use man orientations and challenge them to constantly stay compact without being outnumbered on one side of the pitch.

It is really impressive how well-structured they are with the ball. Usually, the ball-carrier has three passing options. Normally, they are positioned between the lines in order to hinder the opponent from watching the ball all the time. Along with the positioning between the lines they use the third man concept to get one of their midfielders in an advantageous position. 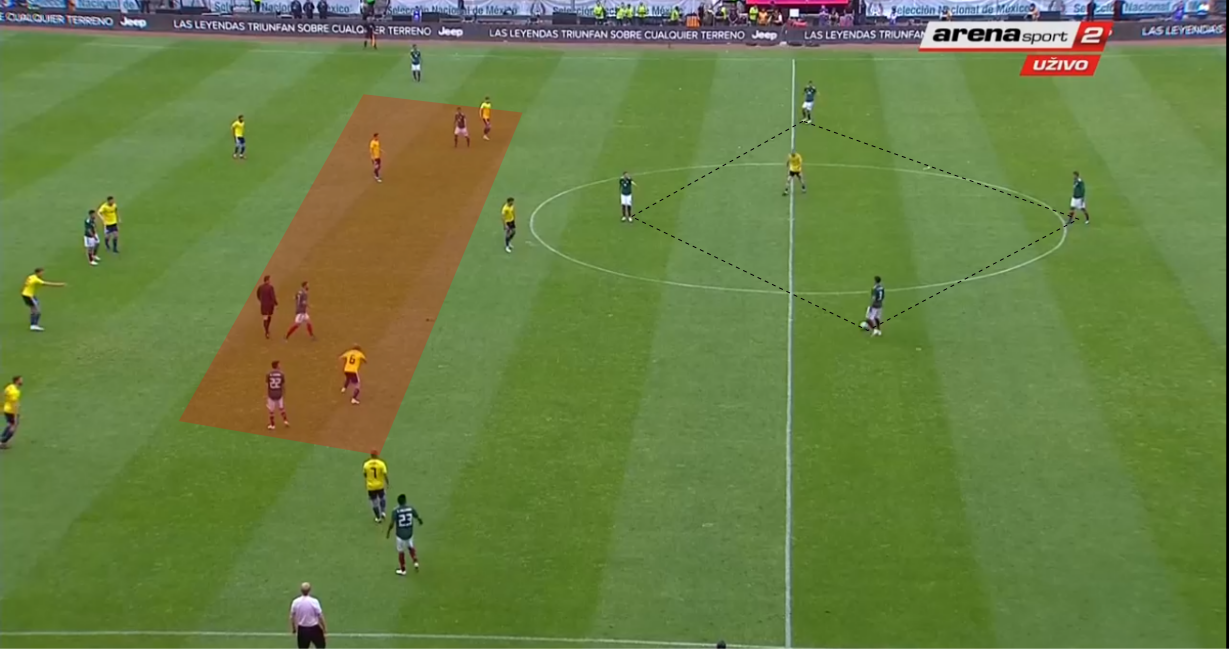 Usually, they try to play through the middle. That’s why three midfielders are positioned between the midfield-line of the opponent. Furthermore, their defensive midfielder occupies the space behind the first pressing-line in order to give the centre-backs a direct passing option. When they build-up with a back-three the centre-backs pushes wide to stretch the opponent´s defensive shape. Especially, the offensive players rarely hold their position they move all the time to overload certain areas.

As I said before, their movement in possession makes them hard to defend. Quite often, one player drops deeper while another push higher immediately. Those movements create communication problems for the defensive team and simultaneously space for Mexico. The diagonal passing option (red marked) is always available for the ball carrier. That´s why Mexico can switch the play to the other side or halfspace all the time.

Defensively, Mexico is kind of an exception. Compared to European teams they don´t defend as a unite regularly they rather try tho press intensively the ball-carrier while closing all direct passing options. To press effectively they use man orientations to get access quickly. Their ultimate goal is to force the opponent to play long-balls which Mexico can intercept easily with the centre-backs. When they press as a unit, they often use a 4-1-4-1 or a 4-4-2. Especially, for teams which want to build-up from behind the Mexican pressing is hard to deal with because you get pressed immediately after receiving the ball.

Andres Guardado played a strong season for Real Betis. Similar to his role in Quique Setien’s team Guardado is the playmaker who connects and balances the attacking game. Normally, he plays a higher role between the lines. If Osorio uses the diamond in midfield a player like Diego Reyes who is defensively strong takes the defensive spot while Guardado plays as a central midfielder. He, not only positions between the lines, he is furthermore responsible for finding the offensive players in an advantageous position he also covers the left positions in order to connect and create triangles. Without him, the Mexican possession game can sometimes look more chaotic.

In a relatively old squad, Hirving Lozano of PSV Eindhoven is the young player to watch. After a great season in the Netherlands in which he scored 17 goals and had 11 assists he now wants to present himself and his talent during that World Cup. Clearly, if he is capable of playing a great tournament the big European clubs will try to sign him as quick as possible.

Lozano played for PSV Eindhoven on both flanks. He feels more comfortable to play on the left wing because then he can cut inside to shoot with his stronger right foot. His speed and dribbling abilities help him to get past defenders and in a good shooting position. But he is also capable of playing on the right-side. Then he aims to cross the ball in either with flat crosses towards the penalty area or with high-crosses towards a striker. For Mexico, his 1v1 and finishing abilities can be crucial to generating enough goal scoring opportunities. It will be interesting to see whether he shows his talent on the highest level.

It is really hard to come up with a wildcard in the Mexican squad. Miguel Layun isn´t one of the unknown players who can have a great impact. Moreover, Layun plays for European top-clubs. First, he was part of Porto´s squad until he moved on. Last season he played for Sevilla in Spain. At Sevilla, he normally plays as a left-back which was his position during the last World Cup in the Mexican squad as well. However, he is one of those players which Osorio loves because he can play multiple positions. Due to his ability to play in central midfield, Osorio can switch formations easily by adjusting Layún´s position. This makes it even harder for opponents to anticipate the movements of Mexico´s offence. Andres Guardado, for instance, fulfilled the transformation from a winger to a central midfielder over the last few years. Miguel Layun could develop in the same direction. For Osorio, he can be a crucial part due to his abilities defensively and offensively.

For Mexico, the first game will be crucial. If they can beat Germany or at least get one point they have the chance to finish first in the group. And then everything is possible. Offensively they can be one of the teams which are fun to watch during the World-Cup. With their fluid and well-structured offence, they can easily beat teams which rely on a 4-4-2 defensively because their own formation provides enough advantages against a 4-4-2. However, their counter-pressing is far from perfect, and also technically gifted teams will find solutions against Mexico´s pressing. They will advance to the next round. But then they will probably be too bad the reach the Quarterfinal.

If you enjoyed this piece you can read our previews of other dark horses like Croatia, Iceland, Peru and Nigeria as well as many others.