In 2014 Lionel Messi and his Argentine team-mates were so close to reaching their goal. In the World Cup final, they played well and fought with Germany the whole game. In the end, Mario Götze scored the decisive goal in extra time. One year later Argentina finished second again, this time in the Copa América they lost against Chile. 2016 the third final in a row Argentina lost again, again to Chile in the Copa América Centenario.

Especially, for Lionel Messi those losses were hard. He’s been compared to Diego Maradona since the start of his career. While he’s won everything with his club, he couldn’t earn a trophy with his country. Now thirty-years old, this World Cup could be one of his last runs at a title. In four years he will be 34 years. This is his last World Cup in his prime.

Argentina have a bunch of good players and definitely count to the extended circle of favourites for winning the World Cup. Besides, Lionel Messi, they have many good offensive players like Paulo Dybala, Gonzalo Higuain and Angel Di Maria. However, they still struggled during the qualification for the World Cup. To reach the group stage they had to rely on the genius moments of Lionel Messi against Ecuador. One of the biggest problems was the lack of defensive effort and the bad structure in possession, they relied on the individual class of their stars.

Jorge Sampaoli, who took over the coaching job last summer, still tries to implement his philosophy. In the friendly games this year, Argentina looked quite different compared to the game against Ecuador. The structure in possession was better, against Italy they dominated the game. However, they still struggled with individual mistakes defensively, against Spain they lost without Lionel Messi 6-1. But, they are on the right path and you can expect a better Argentine team at the World Cup.

Due to the injury of Sergio Romero during the preparation for this World-Cup, Willy Caballero who is excellent with the ball on his feet will most likely start in goal for Argentina.

With Otamendi and Fazio, Sampaoli has two ball-playing centre-backs, especially Otamendi who improved a lot over the course of last season. Marcos Rojo will compete for a starting spot as well but doesn’t look that comfortable either defensively nor offensively. Jorge Sampaoli is going to play with a back-four, in a back-three Javier Mascherano could take the central spot. The former Barcelona player is still a crucial part in possession but lacks the speed to defend quick attackers.

The fullback position is the weakness of Argentina, although they have an interesting player with Tagliafico of Ajax Amsterdam on the left-side. However, he lacks the experience on international level. On the right-side, Gabriel Mercado of Sevilla could start for Argentina.

In midfield, Lucas Biglia will probably take the spot as the deep-lying playmaker. The midfielder of Lazio is really important because of his patient passing. Biglia will get support from one central midfielder who will be positioned behind the midfield-line of the opponent or deeper in order to give Biglia a passing option. For this position they have different candidates, Giovani Lo Celso of Paris St. Germain and Ever Banega of Valencia will fight for that spot.

The other spot in the centre is reserved for Lionel Messi who will have the freedom of moving between the lines from which he can start his dribbling after receiving the ball. Furthermore, the wingers of Argentina normally push inside. With Angel Di Maria, Eduardo Salvio or Manuel Lanzini Sampaoli nominated players who can also play between the lines in tighter spaces.

Up-front Sampaoli can choose between Gonzalo Higuain and Sergio Agüero. While Higuain participates in the combination play by moving deeper and play lay-off passes Agüero offers a more flexible option who can move a lot up-front and therefore makes life hard for a defence. And then there is Pablo Dybala who can play as an additional striker or instead of Lionel Messi between the lines.

At the latest press conference, Sampaoli pointed out that he prefers a 2-3-3-2 during the offensive phase. So, they probably are going to play with a back four. The fullbacks stay wide in order to stretch the opponent while the centre-backs are responsible for the build-up. Together with the goalkeeper and the defensive midfielder, they form a diamond in possession which creates multiple diagonal passing options. 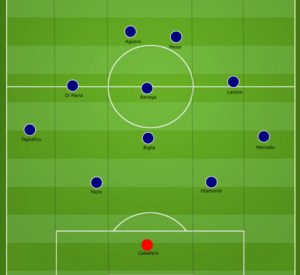 The next three-man line is positioned between the lines of the opponent in order to create triangles and put pressure on the opponent´s defence. The aim of Argentina is to reach the space between defenders and midfielders. With Di Maria and especially Lionel Messi they have a lot of talent in those spaces. 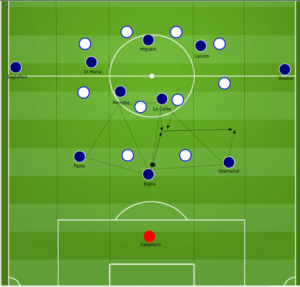 Here Bigilia supports the centre-backs against the opponent. Argentina has a well-connected 3-2 structure in possession.

Since his appointment as national coach, Jorge Sampaoli tried to implement basic principles similar to those of Juego de posición in possession. Against Italy and Spain, they showed a good structure in which every player adjusts his position according to the opponent, the position of the ball and his team-mates. For instance, they rarely had to players on the wing. Normally, one midfielder would push into the half-space while the fullback stays wide. 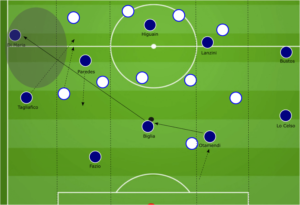 Here, Tagliafico moves into the half-space while Di Maria receives the ball wide. Generally, Argentina want to control the game and create chances out of a well-structured build-up. Due to their diamond in the build-up, Argentina create numerical and positional superiority to break through the pressing of the opponent. For instance, they use a lot of third-man action on the wing to take advantage out of their triangles. Because of Lionel Messi, they either try to pass the ball diagonally from the wing to the centre after using the triangle or they move the opponent from side to side until they make a defensive mistake. Messi then can create some of his magic with dribbling between the lines.

Defensively Argentina has a lot of problems. With Messi in the starting line-up, they will probably defend in a 4-4-2. Although there shaped looks compact quite often, they aren’t able to press. A lot of their players have defensive issues. Against Spain, their counter-pressing wasn’t perfect nor their normal pressing which allowed Spain to pass the ball into the interior corridors, from there on Argentina´s covering of depth and the defending in the box was poor. This can cause major problems against stronger opponents over the course of the tournament.

Obviously, Lionel Messi is the key player for Argentina. But, because everyone knows Lionel Messi I want to look at Lucas Biglia who is crucial to the way Jorge Sampaoli wants to play. Quite likely, Biglia will start ahead of Javier Mascherano due to his advantages in terms of physical attributes. The Lazio-player is important for the first stage of playing in possession. He functions as a passing option in the centre and has to create connections between the offensive midfielders and the centre-backs. Therefore, he occupies the space in the centre and adjusts his position constantly in order to be the free-man behind the first line of pressing. Or he supports the centre-backs by moving deeper. In higher zones, he is again responsible for keeping the combination-play in rhythm and allowing Argentina to switch sides.

Finding a young talent in Argentina’s squad isn’t that easy. Most of the players are either too old or known by everyone like Paulo Dybala. One talent who can take a crucial role in the squad is Giovani Lo Celso. Coming out of the Paris St. Germain youth academy he received a lot of playing time during that season. He is a flexible offensive player who can play on the wing or in the centre. For Argentina he will most likely play in the centre and fight for playing time with the experienced Ever Banega. Lo Celso is really strong between the lines. His dribbling and passing ability match nicely with the playing style of Lionel Messi.

Argentina’s left-back Tagliafico is worth to watch closer. He possesses good technical abilities and a good understanding for his position. For instance, he adjusts his position quickly due to the common reference points. This helps Argentina to create a connected shape. In the last friendlies his performances were convincing. He attacked open spaces he received because of the focus towards the wings in Argentina’s possession-game. Furthermore, his defensive performance was solid with possibilities to improve it. He could be one of those players who increases his value massively over the course of the World-Cup.

Argentina is one of the interesting teams because no one can really assess the team. If they are capable of defending well and creating a structure to get the ball to Messi in dangerous zones they can be very successful. However, it is important that not only Lionel Messi is the offence of Argentina but the whole team. 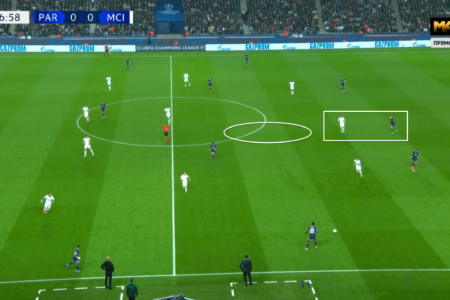