On paper Senegal has a strong squad, filled with players playing in top leagues such as the Bundesliga, Premier League and Serie A. Pace is the name of the game in attack with Keita Balde, Sadio Mane, Sarr and Niang all offering a counter-attacking threat from their pace and dribbling ability. All have had decent seasons and will be looking to make a mark on the tournament.

The midfield are oddly all based in the UK, with Gueye and Kouyate offering a formidable presence in the middle of the pitch that holds the team together.

The defence is definitely the weak-link in the Senegal team, with only Napoli’s Koulibaly the only fantastic defender. Interestingly he was sometimes partnered with 19-year-old Eupen defender Moussa Wague during qualifying, and it will be a bold call to start someone so young and relatively inexperienced in football’s biggest tournament.

It’s hard to say how Senegal will line up in the World Cup, mixing up their formations regularly – carrying that on in their most recent friendlies lining up in a 3-4-3, 4-3-3 and a 4-4-2 (drawing all 3). Personally, I feel a 4-3-3 formation will bring the most out of a very well balanced squad. 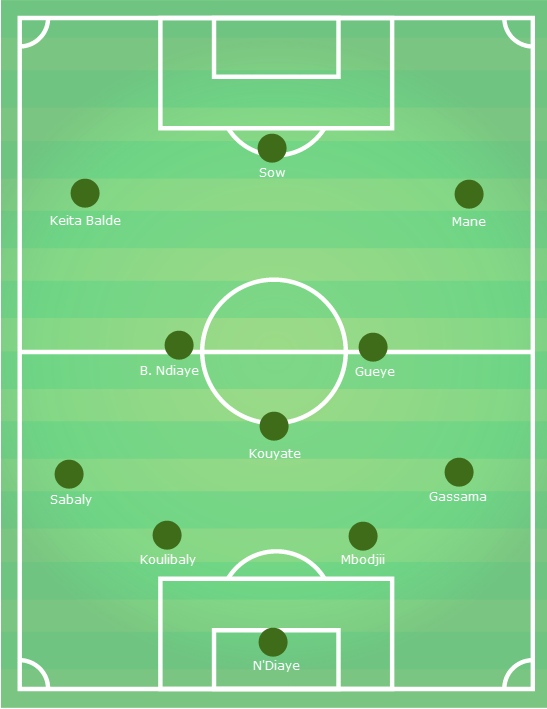 I watched Senegal’s 2-0 victory over South Africa back in November as I feel that resembles the squad and formation that I think Senegal will likely bring. Senegal won 2-0 in a match that was far from a classic. It was an incredibly scrappy game, with both teams using the ball very poorly, never really attempting to build through the midfield instead often going long for the strikers to chase, which made it hard to see how Senegal will approach things against a higher class of opposition. Admittedly Senegal had a few notable omissions in their team but I feel if they play like this in the World Cup they’ll be heading for a very early exit, obviously though my view is based on one game and they got through qualifying unbeaten – so there is obviously a good team there!

Despite my negative first impressions, there were a few good moments. Mane looked electric and played a fantastic pass for Sakho to convert, whilst Niang had a few moments where he managed to get himself out of impossibly tight situations with his dribbling ability.

Sadio Mane: After a phenomenal season for Liverpool where he netted 20 goals and 8 assists (in all competitions). For Liverpool he’s mostly deployed on the right wing and is largely used in the same way for Senegal, although he is sometimes played up front. Despite this, Mane isn’t as effective for Senegal – only netting twice in qualifying. That being said, he’ll still be Senegal’s main attacking threat and will be key to any sort of success Senegal may have.

Ismaila Sarr: Aged just 20, big things are expected from Sarr in the future. He joined Metz from Senegalese side Generation Foot in the summer of 2016. In his debut season he made 20 starts, scoring 5 goals and grabbing 1 assist – an impressive return for taking such a step up. This breakout season saw Rennes spend around €17.5m on the youngster, where he again scored 5 goals and got another 3 assists. Sarr is capable of playing anywhere in attack and possesses blistering pace that he uses to terrorise defenders, which combined with his dribbling ability and work-rate is surely prompting many big clubs to take notice of the youngster. Comparisons to compatriot Mane will be made and rightly so as Sarr is a fantastic player, although with Mane and Balde likely ahead of him in the pecking order, he might find his opportunities this World Cup limited.

M’Baye Niang: Capable of playing on either wing or up front, Niang is one of the most infuriatingly inconsistent players I’ve ever seen. On his day he’s capable of ripping defences apart with his dribbling ability and pace which is what prompted AC Milan to pay Caen €3m for him when he was aged just 17. Since then he failed to really hold down a place in the Milan side making a maximum of 15 starts in a season since joining in 2012/13. This has seen him take multiple loan spells to clubs such as Genoa, Watford and most recently Torino with varying degrees of success. As a Watford fan I saw him play quite a lot and saw him tear teams apart one game (his goal against West Brom was sublime – dribbling past 2 players before smashing it into the net from just outside the area) then completely go missing for the next 5 games. For Senegal’s sake I hope the former Niang turns up.

Senegal have an impossibly tough to predict group – with Poland, Colombia and Japan all equally matched with Senegal. They have a team packed with quality players along with some of the next generation that will surely take a lot away from the experience of playing in a World Cup. It’s hard to see them progressing too far in the competition though and I’d say getting through to the first knockout round would probably be as far as they could go – provided they make it out the tough group they’ve been given.