The Libertadores recently reached the end of the group stage and it’s been a mixed bag for Chilean sides. Colo Colo progressed to the knock-out stages for the first time since 2007 but Universidad de Chile ended up finishing bottom of an admittedly tough Group 5 featuring Racing, Cruzeiro and Vasco.

Apart from a humiliating 7-0 loss to Cruzeiro, for the most part La U held their own against tough opposition and there were some positives to be taken from their campaign, not least 21-year-old Angelo Araos announcing himself on the big stage.

As one of two playmakers played behind veteran striker Mauricio Pinilla, Araos was consistently one of La U’s best attacking outlets throughout the campaign. Notable performances came in the 1-0 win against Vasco, in which he scored the decisive goal, and the 1-1 draw against Racing. Unfortunately, it wasn’t enough to inspire his side through to the latter stages.

Born in Antofagasta in the north of Chile, Araos began his career with local side Deportes Antofagasta. He made his first team debut in October 2015 and went on to rack up 53 appearances for Los Pumas before his 21st birthday.

Araos was beginning to catch the eye and was called up to the Chile U20 squad for the 2017 Sudamericano. However, he only made one appearance off the bench as Chile limped out in the first group phase in yet another disappointing performance at youth level for the La Rojita.

The inevitable move came at the beginning of 2018 when Universidad de Chile forked out $800k for half his rights and he moved south to the capital. In under six months he has already become a regular feature for the Santiago giants and has been called up by Reinaldo Rueda to the senior national team for the upcoming friendlies.

So just who is Angelo Araos and what is all the fuss about? Here we look at what makes him such an intriguing talent.

Araos is a tall, graceful attacking midfielder who can also play as a support striker and has even drawn comparisons to the Uruguayan great Enzo Francescoli. A quiet player off the field, Araos comes alive when he steps on the pitch and has the confidence to showcase his great dribbling skills.

His long legs mean he can lure defenders into thinking they can win the ball before quickly shifting the ball from foot to foot to elegantly evade the incoming challenges and get himself out of tight situations. 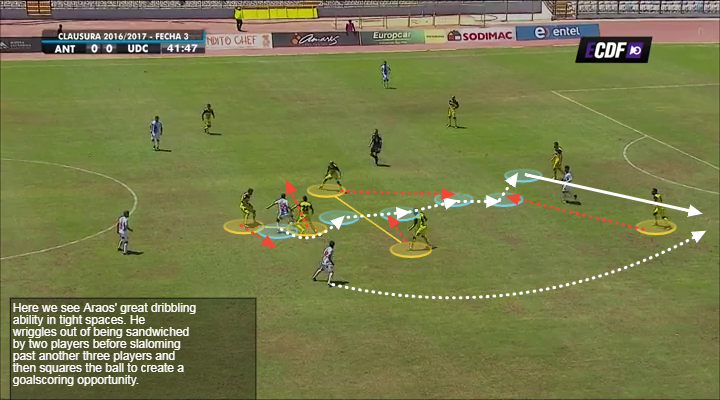 In some respect his style of play evokes the likes of Gio Moreno or Javier Pastore, but rather than being a languid playmaker, Araos also has impressive pace which gives his dribbling an added potency. 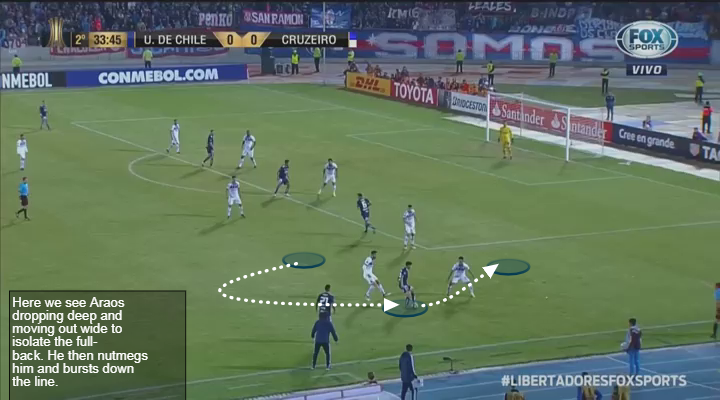 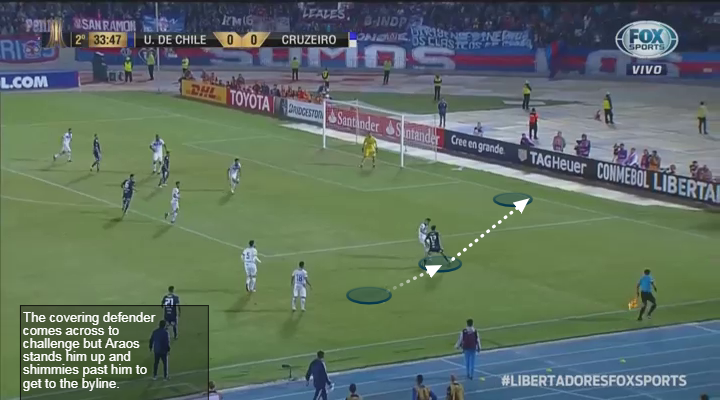 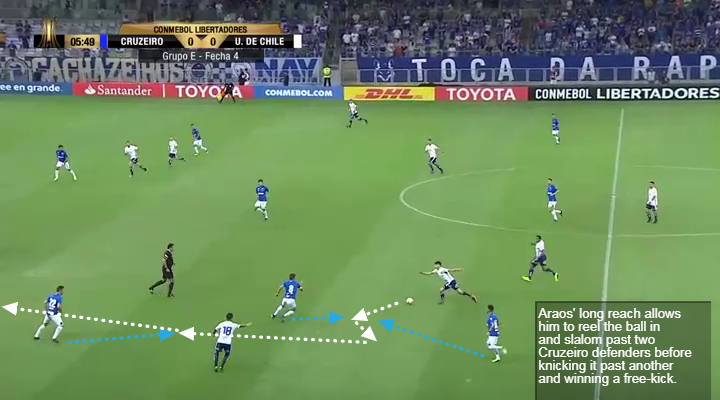 Understandably this ability to commit defenders in one-on-one situations also means he’s very good at winning fouls. Nevertheless, his height and decent upper body strength mean that he can ride challenges and hold his own in duels.

OFF THE BALL MOVEMENT

As well as his qualities on the ball, Araos’ movement off the ball is another of the impressive aspects of his game. This intelligent movement makes Araos a very versatile player, equally adept at finding space between the lines as a number 10 as he is using his pace on the flank to get in behind defences. 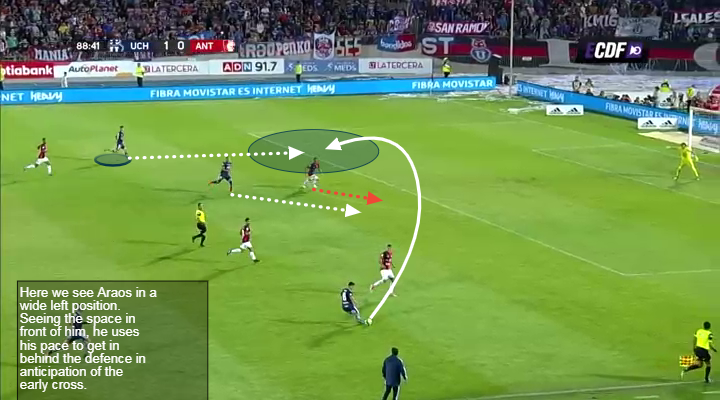 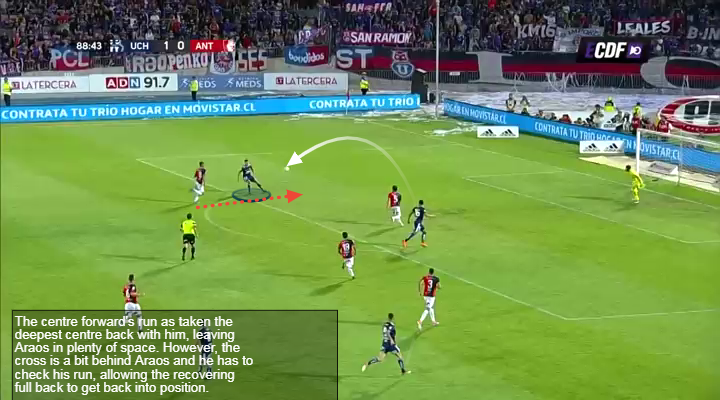 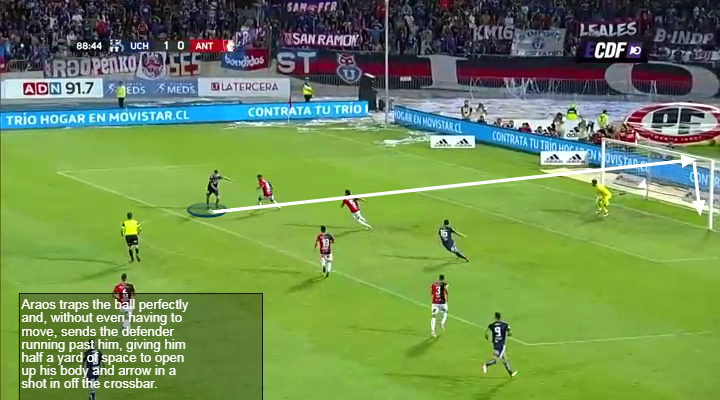 What’s more, as a second striker he can either push up or drop back into the hole, making him very difficult to man mark. 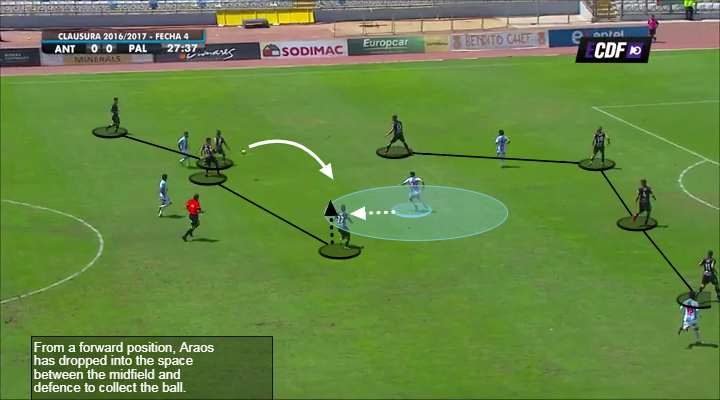 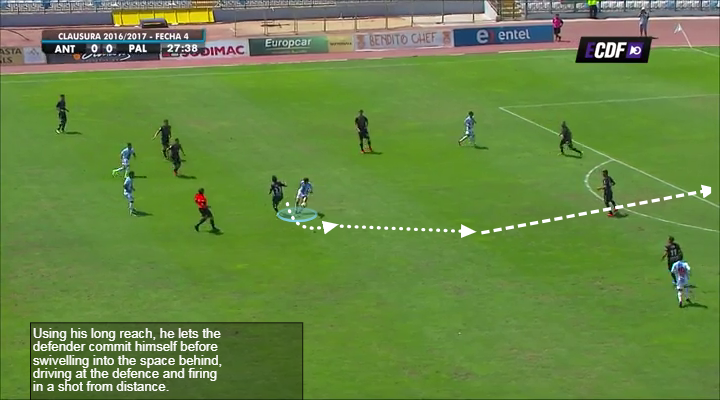 An extremely elusive customer, one particular skill Araos excels at is his ability to receive the ball on the turn. His tall frame, great balance and deceptive drop of the shoulder mean that Araos can play well with his back to goal and use the momentum of the ball to roll his marker with ease.

His winner against Vasco was a prime example of this ability to find space and spin past defenders. 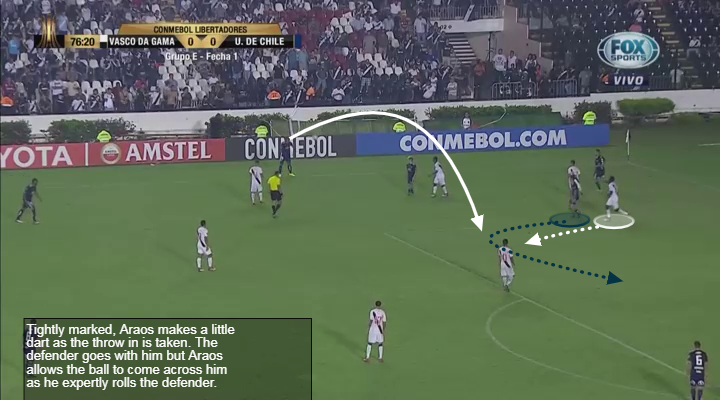 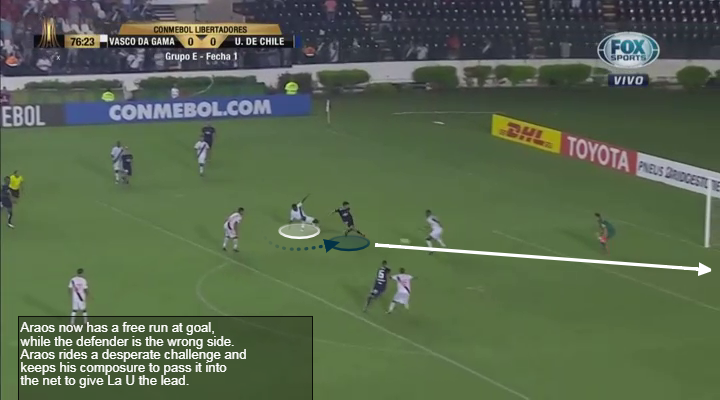 Araos has a good variety of passing, from incisive through-balls and short one-twos to more direct longer balls from deeper midfield positions. 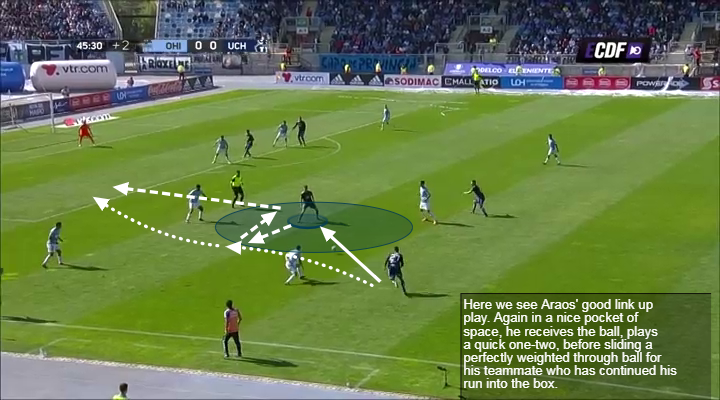 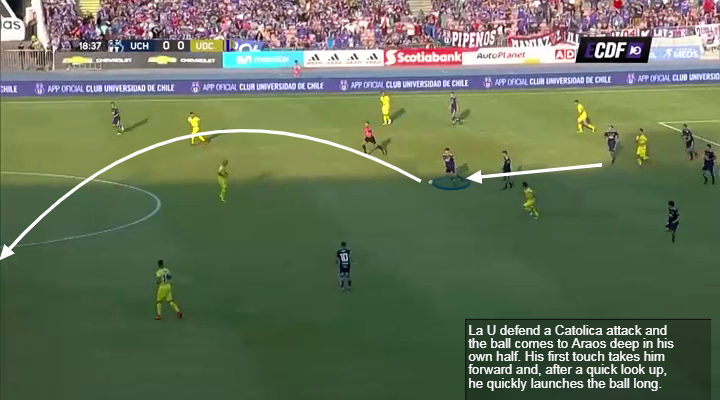 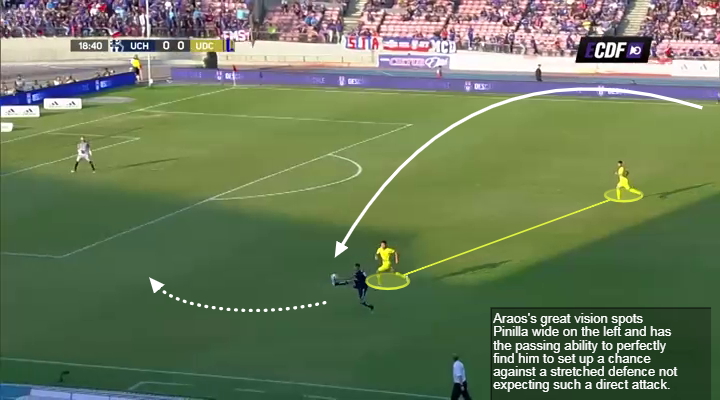 His spatial awareness, vision and creativity makes him particularly effective in his preferred playmaking role and he also possesses the technique to execute killer balls in the final third 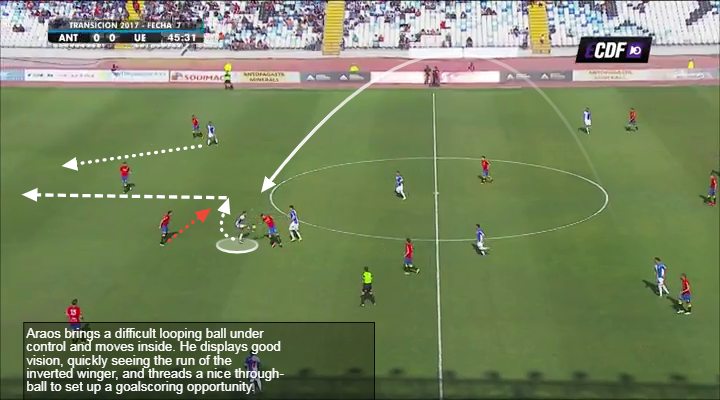 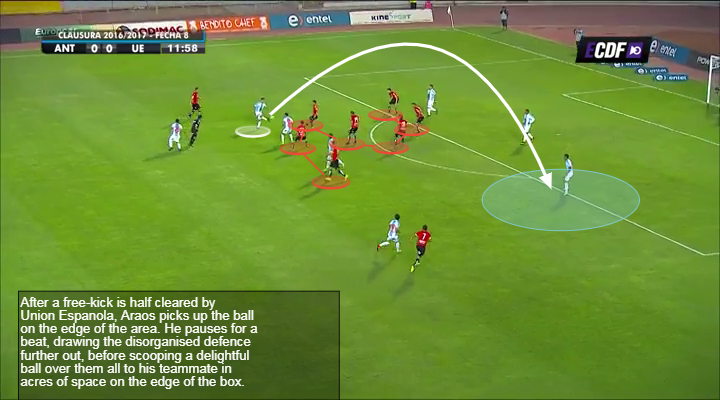 Furthermore, his close control and ability to hold on to the ball means that he often draws other players away, creating space for his teammates before finding them. The passes themselves may look straightforward but there is a real art in their timing. 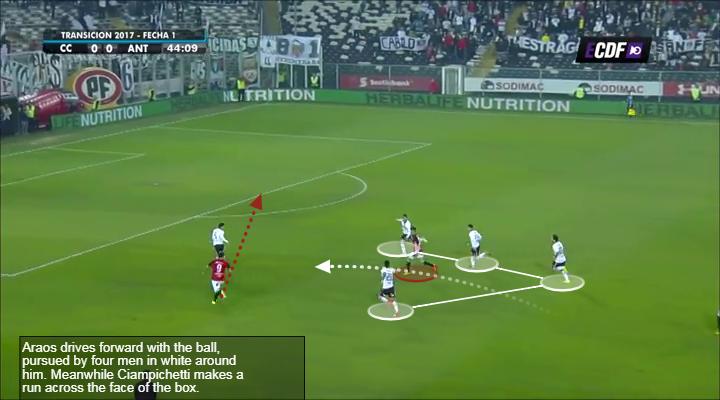 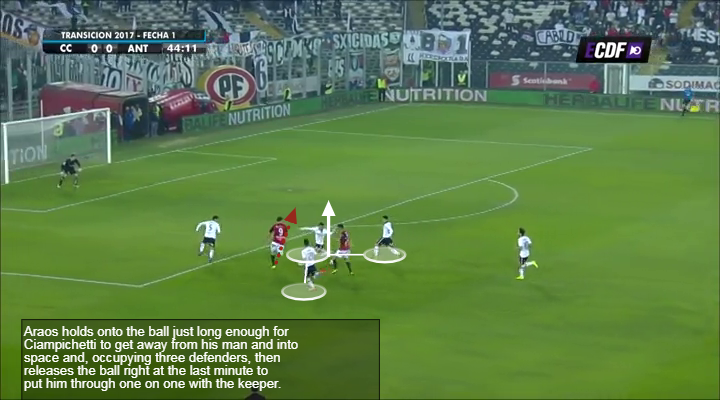 For an attack-minded player, it is somewhat surprising that Araos hasn’t got more goals to his name. A good striker of the ball with impressive technique and someone who can get into dangerous positions, he is certainly capable of adding more goals to his game. If he can do this then his stock would really go through the roof.

After Chile’s failure to qualify for the World Cup and their poor showings at youth level in recent years, the emergence of Araos could be really important for the squad’s regeneration going into the next qualification cycle. He recently made his debut against Poland and will look to consolidate his position in the squad.

What makes Araos particularly interesting is that he seems to bring something different to the table than the current crop of Chile internationals. It’s also worth taking into account that new boss Reinaldo Rueda has a good track record with younger players, which again could be a positive for Araos’ continued chances at national team level.

Given that Araos has only just moved to La U at the start of 2018, the expectation will be that he will stay around for at least another year. Represented by Fernando Felicevich, whose Twenty Two agency looks after the likes of Alexis Sanchez and Arturo Vidal, Araos’ name will no doubt be shopped around sooner rather than later but for the time being he should make himself indispensable for the Santiago giants.

Teammate David Pizarro has already sung Araos’ praises, claiming that in a couple of years he could be worth $20mil and is a future international regular in the making. Araos now leads the head of an exciting crop of youngsters at La U, along with Nicolas Guerra and Yeferson Soteldo, and it will be fascinating to see where he fits in for the national team as Chile look to put their failure to qualify for Russia behind them.