The 2018 World Cup is yet to fail in giving us drama and last night was no different. After 120 minutes possibly now the most famous England penalty shoot-out saw the Three Lions triumph over Colombia in what was another greatly tense World Cup knockout game.

Looking at England’s tournament so far, Colombia have most probably offered them the hardest challenge as the match against Belgium was pretty much battle of the B teams.

However, like in their previous outings, England performed in a professional manner which helped them control the majority of the game how they would’ve liked. They did, however, possibly offer Colombia too much respect which showed late in regular time and in the first half of extra time. Here’s how: 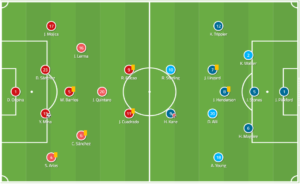 As expected, England reverted back to their A team for this game, however, the one change that was somewhat surprising was starting Dele Alli after his thigh strain. For the most part though, this decision worked in Gareth Southgate’s favour.

For Colombia, the big talking point was the absence of James Rodriguez through injury. Without their star man, they changed their system to a 4-3-1-2 for the game instead of the 4-3-3/4-2-3-1 that served them and Rodriguez well in the group. In this system the creative burden fell very much on Juan Fernando Quintero in the number 10 position but England combatted this very well.

As many say, you can’t anything without a good defence and for the most part, that’s what England displayed last night. Most importantly, however, is that it wasn’t just defenders defending but the entire team worked as a defensive unit and to great effect which allowed them to keep Colombia at bay for so long.

You can argue this is something most teams do, which is true, but when defending from the front, many teams fall victim to counter attacks. Here’s how England avoided that.

What this shows is a great level of patience, trust and organisation for which Gareth Southgate and his defensive staff should take great credit for. Every player knew what to do in this types of situations which occurred numerous times across the game and they were more or less successful every time. England’s strong centre was almost like the Bermuda triangle for Quintero.

As well as his two clinical penalties last night, Harry Kane also showed us something not many expected to see as he played from deep positions an awful lot. It’s admirable that he wants to drop off, get involved and be an outlet for the team and drive up the pitch to win fouls. However, there are times when it seems he could hand that responsibility to someone else around him as there were instances when his presence was missed in the Colombian box.

However, with Kane dropping deep to drive up the pitch many times, he didn’t take as many risks as usual up front.

This onus of getting into the box isn’t solely on Kane and going into the quarter final against Sweden, Alli should be sharper and hopefully will get himself in the box as he does for Tottenham if the chance arises.

With their last gasp equaliser, Colombia had a newfound confidence which saw their performance improve massively in extra time. However, it wasn’t just their energy that saw them cause England problems but their substitutions. In particular the introduction of Luis Muriel who replaced Quintero and offered something very different.

The inclusion of Muriel as seen above had great potential to see Colombia through to the quarter-finals as this is a pattern of play that was used multiple times by Juan Pekerman’s side in extra time. This possibly happened as, throughout the tournament, England have predominantly played with one holding midfielder rather than two. With less familiarity may have come some issues with who was supposed to pick up who, something that could be fixed if Southgate decides to opt for the same approach late on against Sweden.

All in all, for a knockout stage game I felt England’s game plan was very efficient but could’ve been a bit more attack minded. The defensive structure from top to bottom was very encouraging as time and again Colombia failed to penetrate through the middle of the pitch.

However, going forward, there needs to be the same fluidity we saw earlier in the tournament. You could argue that it was due to the opposition but there were opportunities for free-flowing football against Colombia. We did get glimpses of it as England’s 3rd man runs proved to be a problem for Colombia across the 120 minutes last night.

Either way, England are through to the quarterfinals with a great chance of reaching the semis against Sweden.