The last matchday of Group B provided the game between Spain and Morocco. This was the duel of a world class team with high expectations and a nation which competes at a World Cup again after 20 years.

La Roja needed a win in order to qualify for Round 16 independent from the result of Portugal’s match against Iran.

On the contrary, Lions de l’Atlas had already been eliminated after two unfortunate defeats with considerable performances. 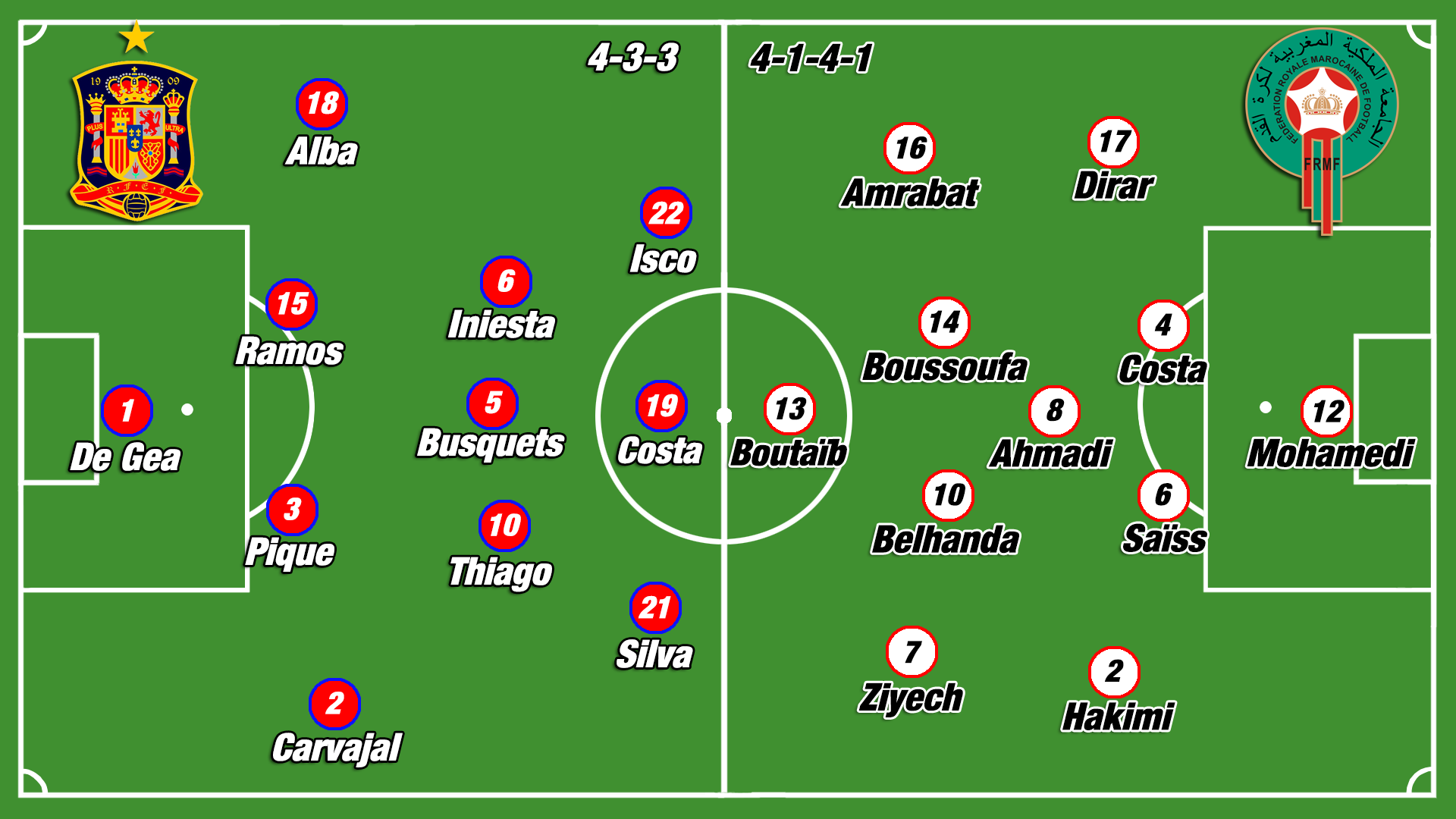 Fernando Hierro set his team up in a 4-3-3 formation as in their match against Iran. The only difference was right-winger David Silva playing instead of Vazquez.

Morocco sticked to their system as well. They line up in a 4-1-4-1 with Saïss replacing Benatia as a centre-back.

Man-oriented defending all over the pitch

Hervé Renard chose a 4-1-4-1 system with man-orientation. This occasionally lead to a 4-2-3-1-ish formation when Boussoufa dropped to mark Iniesta in a deep position. Belhanda and Boussoufa were the ones who should prevent Iniesta and Thiago from play-making. Therefore both of them left formation whenever the Spanish midfielders received the ball in central areas to apply pressure and avoid forward passes.

It has a quite ironic taste that Morocco scored the leading goal out of their first unorganized moment of pressing. Both central-midfielders were dragged out of formation leaving El Ahmadi as the only midfielder in the center. Instead of exploiting this, Iniesta and Ramos invited striker Boutaïb into a 1v1 against De Gea due to a misunderstanding. 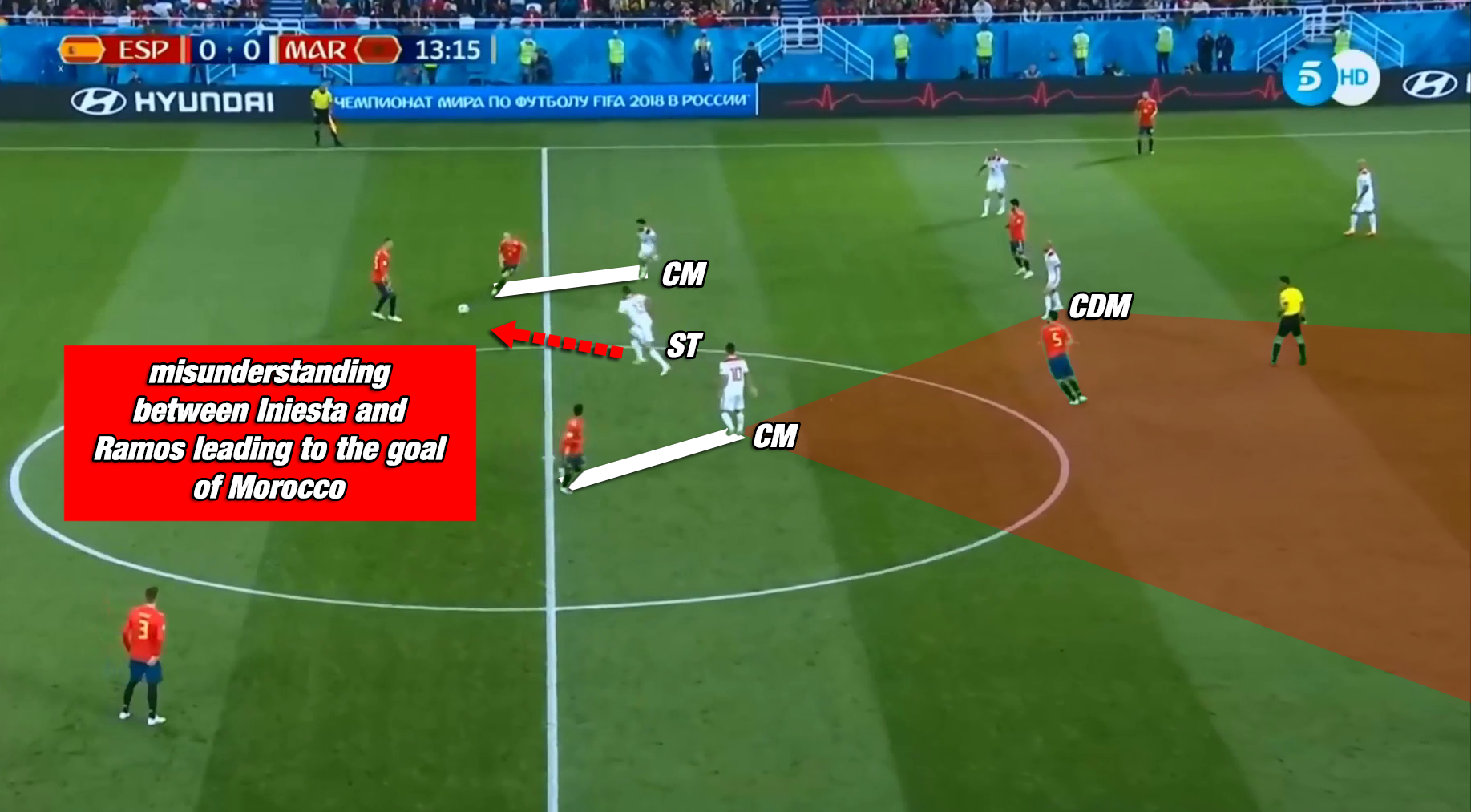 Especially in the second half, Morocco acted extremely man-orientated on the positional fluidity of Spain. Full-backs sticked to the wingers like wax. The wingers followed every step of the upmoving Spanish full-backs. And the centre-midfielders made sure to stay with Iniesta and Thiago all the time. 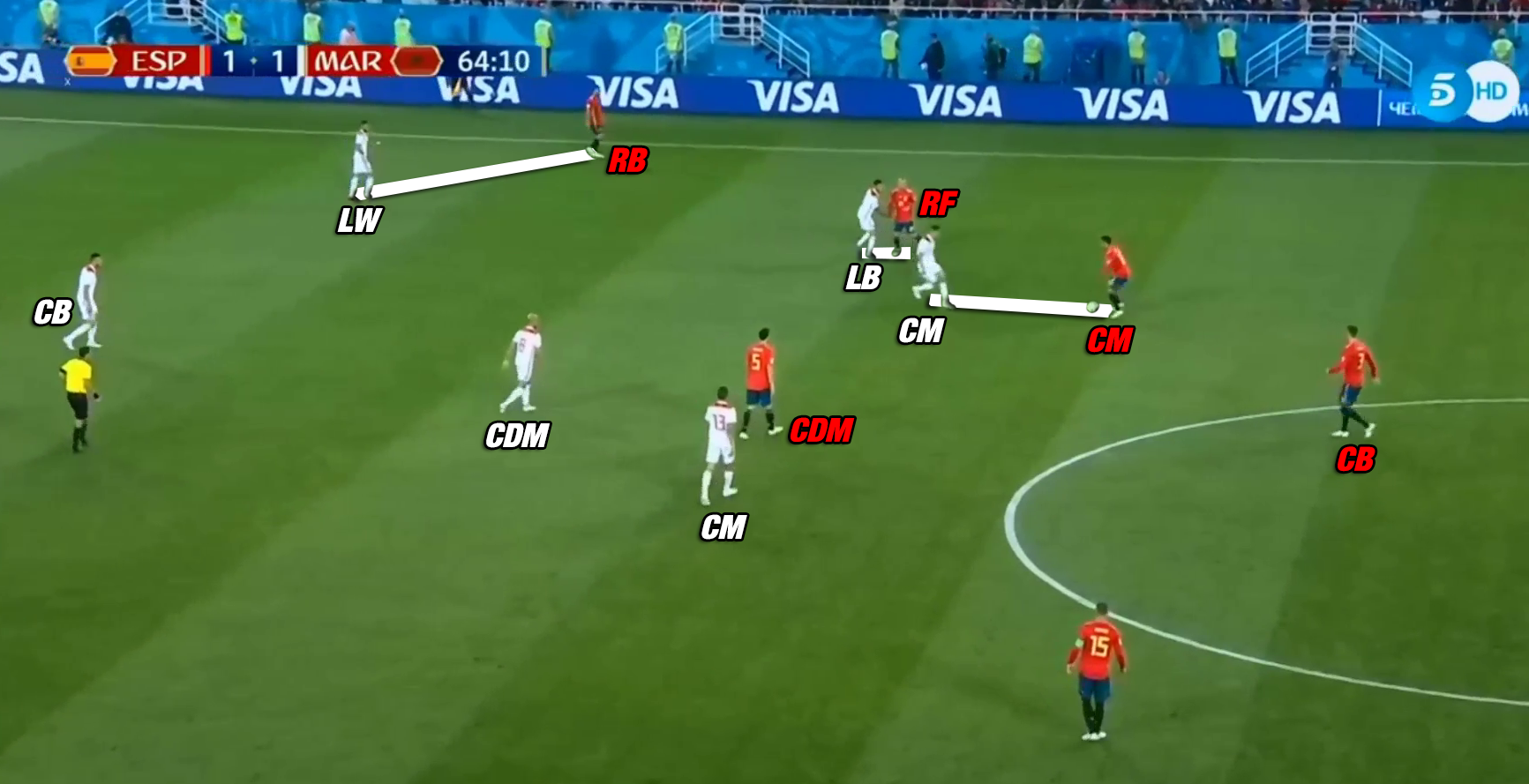 The squad of Fernando Hierro tried to overload the wings and break through the half spaces. Iniesta and Isco as the Spanish key players were involved in nearly every attack. That is why Spain mostly attacked through the left half space. It was not a coincidence that Isco and Iniesta scored the equalizer nearly on their own. Due to clever movement of Iniesta, there was space between the lines. Isco occupied this space to introduce a final combination between Costa, Iniesta and him, scoring the goal. 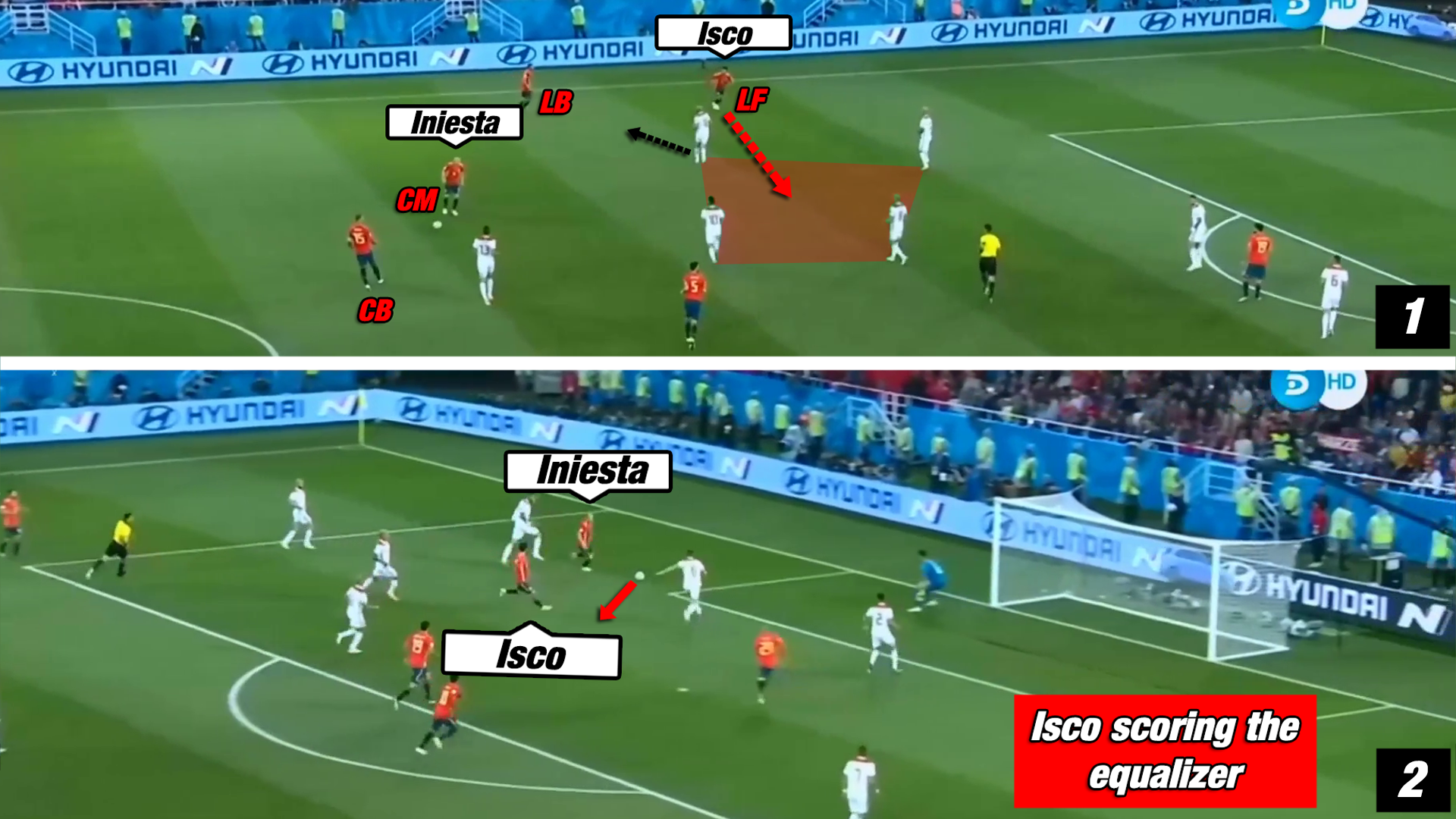 However, the Spanish side failed to threaten the Moroccan goal from open play more often which had different reasons.

Intelligent shifting as the key

One of these reasons was the way Morocco defended in their own half.

Morocco, most of the time defending in a low block, were able to stop the Spanish attacks with intelligent shifting. The Moroccan defence outnumbered Spain on the wing. Even after a switch of play, Morocco was able to quickly shift to the ball and outnumber Spain again who often left Silva and Carvajal alone on the right wing. 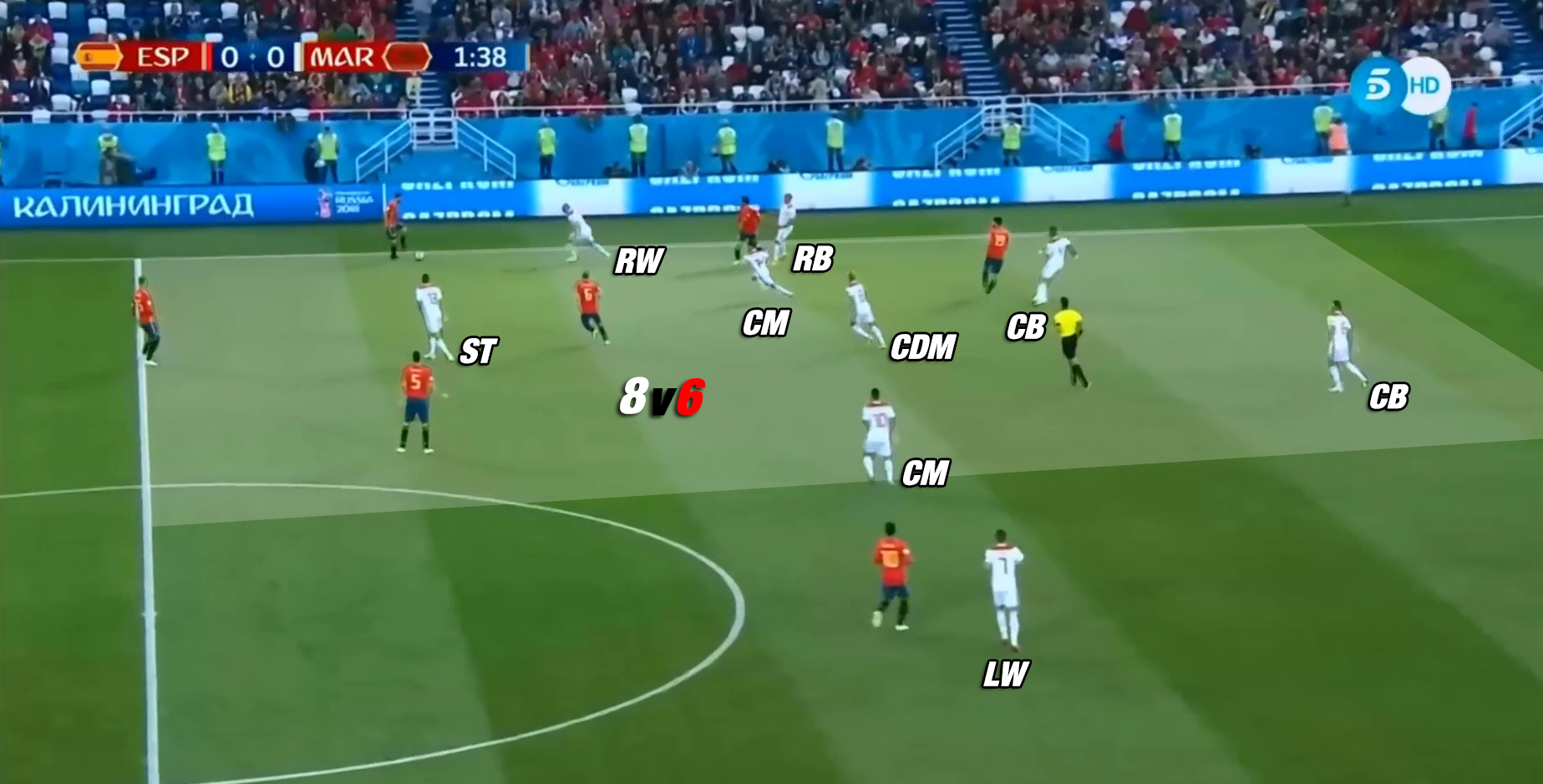 Morocco reduced their attacking phase to the essential. Building-up with two centre-backs, El Ahmadi always tried to provide diagonal passing lanes to break the first line and to progress the ball up the pitch. Sometimes even one of the centre-midfielders came short to receive the ball. In this case, the centre-backs would go wider in order to be able to play a long line ball. If short pass play seemed too risky, the centre-backs or situationally the goalkeeper went for a long ball to either of the wingers. 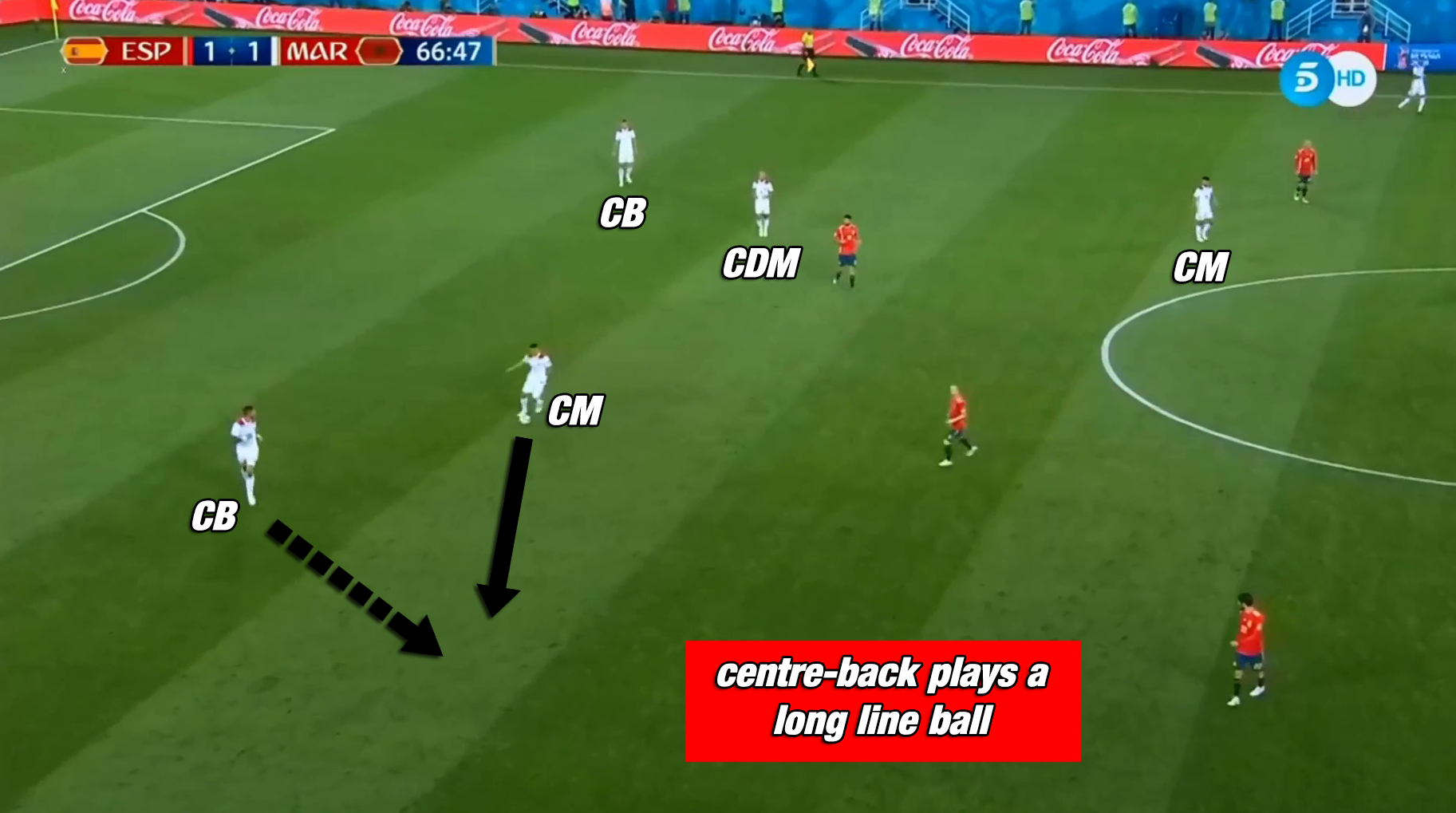 To get into the last third, Lions de l’Atlas used simple one-two’s on the wing with Dirar or Hakimi. Ziyech and Amrabat were able to threaten Spain’s goal with long distance shots, hitting the woodwork once (54th minute). 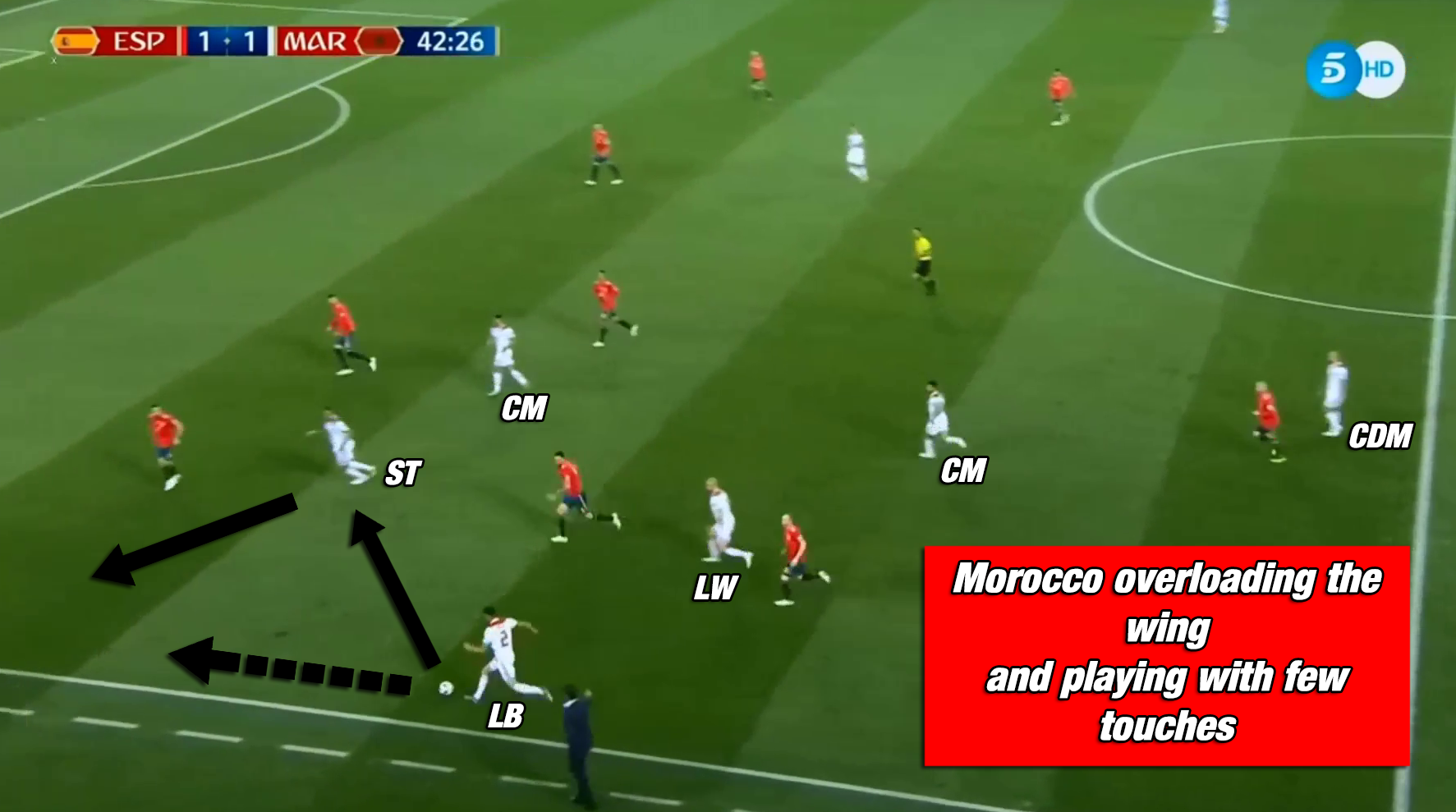 In the few moments of Moroccan possession, the urge of Spain to regain the ball was obvious. Spain pressed early and forced the build-up players to play long balls. Costa closed the attack down to one side by using his cover-shadow to cut off one centre-back. Other players providing short passing options were marked by centre-midfielders and wingers. 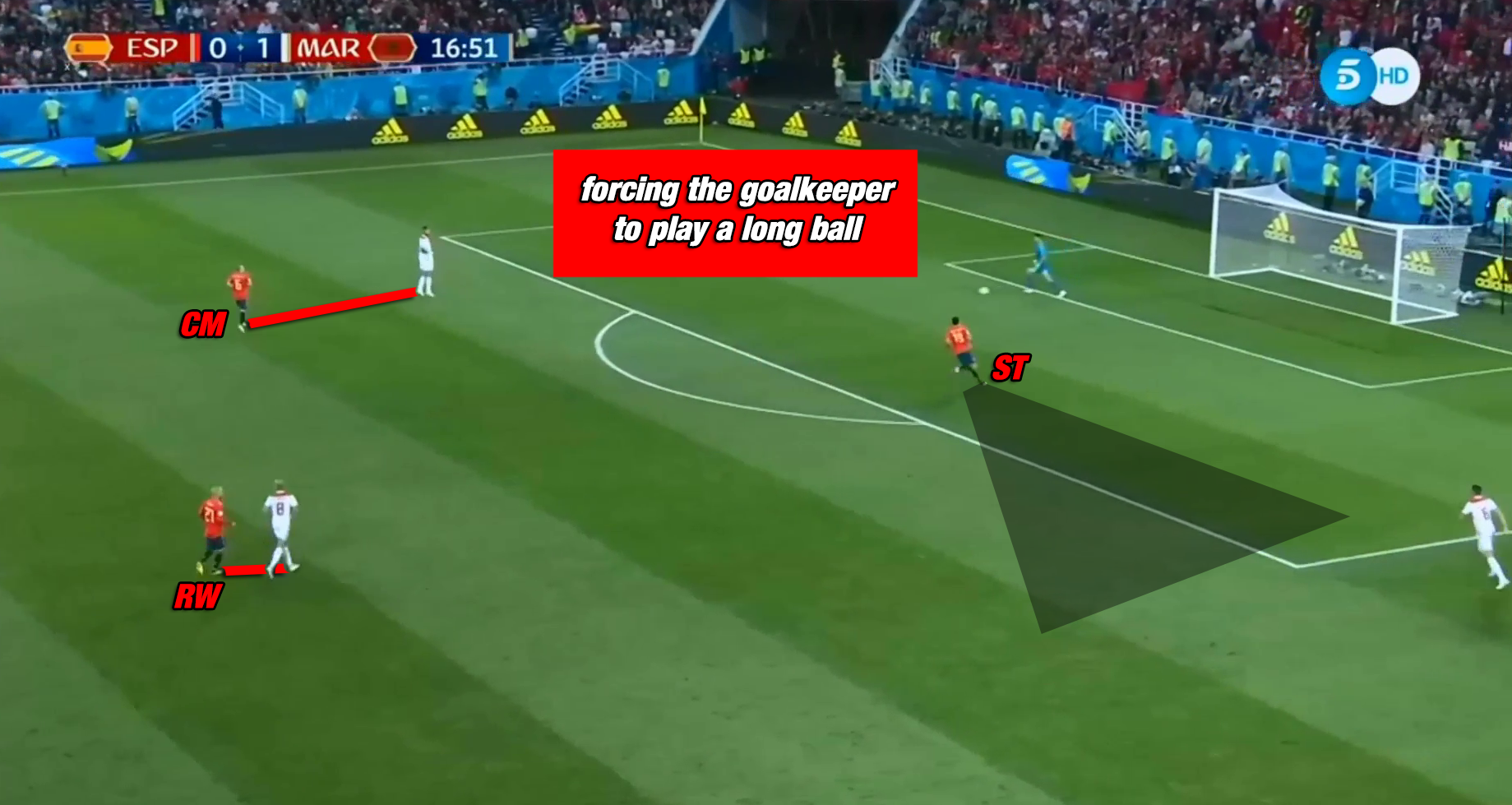 During the first half, Spain nearly went behind, when Ramos did not cover Pique. Thus Boutaïb had the biggest goal scoring opportunity of the first half but De Gea saved his shot. This reveals the forward-thinking style of play, that sometimes puts Spain in danger. 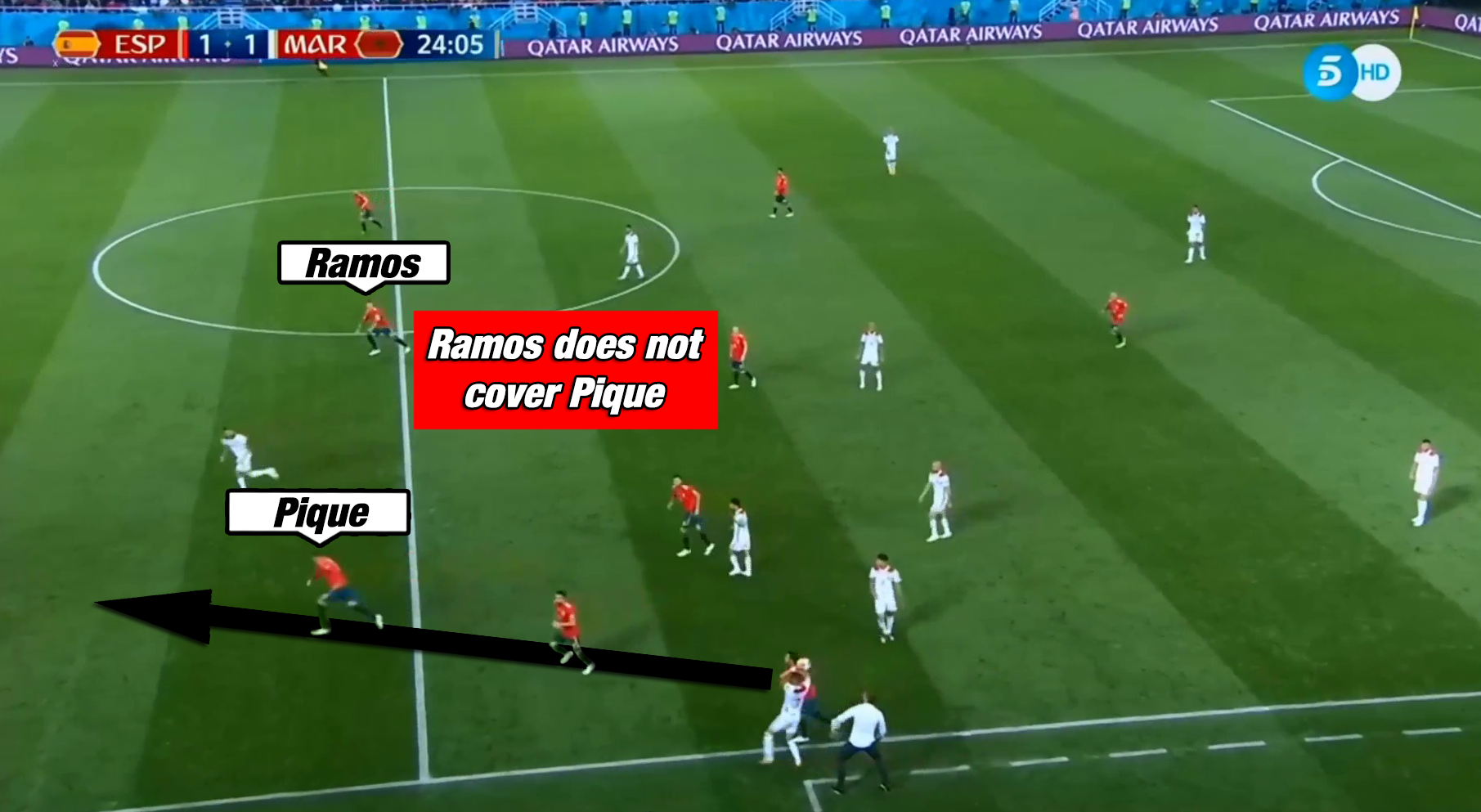 As either of the teams were not really effective from open play, set piece situations lead to dramatic scenes in the closing stages of the game.

At first, substitute En-Nesyri scored the second lead for Morocco after a corner-kick. Ramos as his man-marker was not able to keep up with the jumping ability of the Moroccan, heading the ball into the net.

Just a few moments before the final whistle Spain scored the equalizer in the person of Aspas after a short corner-kick.

To sum up, Spain did not convince with their performance and struggled to win against Morocco. Spain failed to penetrate the Moroccan defensive block from open play. Although Spain qualified for the ⅛-finals with this draw, they definitely need to lend their possession based game more penetrating power in order to fulfil the expectations.

However, the Moroccan performance may not be underestimated. They were able to take Thiago and Iniesta out of play and were effective in front of the goal. Therefore Morocco deserves to say goodbye with winning one point against the World Champion of 2010.