Two major winner candidate met in the last round of the group stages. England faced with the Belgian golden generation, and the Three Lions defeated 0-1 by Belgium. Let’s see how!

As I wrote in my preview on Belgium before the tournament started, the group G will mostly about the battle of England and Belgium. If nothing vis maior/major happening, this two team will advance to the next round of the tournament. This was correct, that two teams finished at the top of the Group G, however, there was a spin in the events.

Before the World Cup, 2018 started the biggest question was who will win this group, therefore who will presumably face Germany in the quarterfinals. As we know, Germany performed poorly and knocked out early from the tournament and Brazil become the biggest threat to England and Belgium. Thus before the England-Belgium match, the battle changed and no-one would really want to win the group due to the consequences that the winner will probably meet Brazil later on.

For this reason or others, both coaches sent the team B to the pitch.

Battle of the three at the back 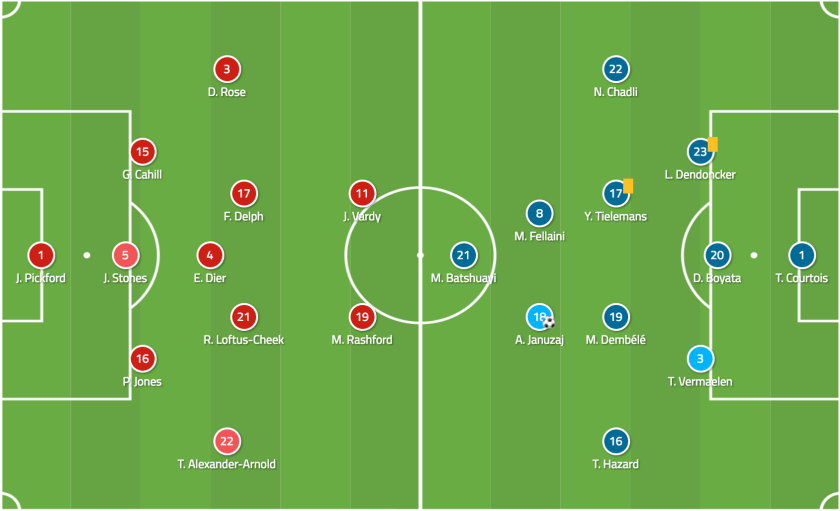 Both teams play with 3 defenders at the back, but while Southgate chose to form a 3-5-2, Roberto Martinez sticks to the 3-4-2-1/3-4-3 formation. Although both of them transformed into a 5-3-2 at defending phase.

Interesting fact that Southgate only came up with the idea of 3-5-2 formation right before the World Cup. He tried several structures like 4-3-2-1. but he rather chose to play with a lone holding midfielder – Dier or Henderson – and two players who operating in the half spaces. Lingard and Alli (or this case Delph and Loftus-Cheek) positioning high up the pitch while England in possession, but they drop when it comes to defending. Flexible and Fluid system.

This time the line-ups showed the intention of both sides to resting and also giving some taste of the World Cup to the supplementary players.

Every setup, the formation has a weak spot, a space that difficult to cover or defend. Belgium’s weak spot is behind the wingbacks, Chadli and T.Hazard. Whilst Belgium in they mid-defensive block Hazard and Chadli positioned in the midfield line in order to cover the whole pitch in width. Only when they moved into deep defensive phase, Hazard and Chadli dropping back to the defensive line. Therefore it was a wise tool to try to get behind the wingbacks, and England used that frequently. 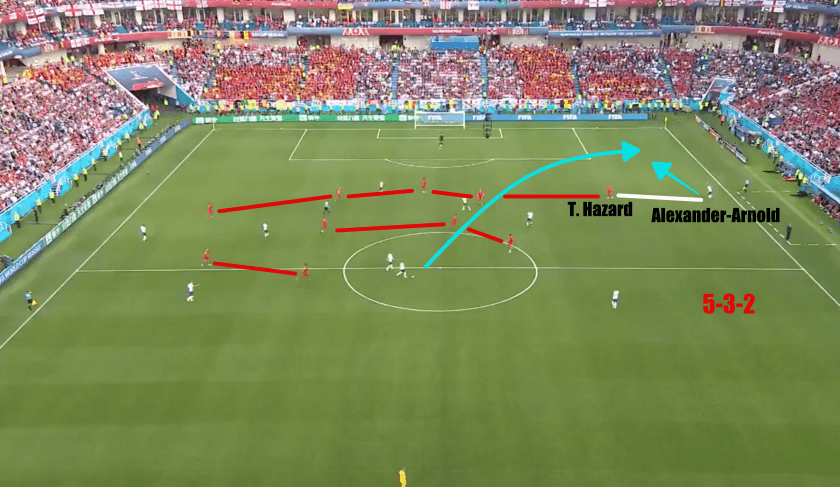 However, Roberto Martinez should be prepared his team for that due to Hazard anticipated this passes, thus he could defend and solve these situations. So these diagonal passes were ineffective.

On the other hand, England also had some similar problem in spite of the fact that they used 3 midfielders. When England was defending in front of the 5 defenders 3 midfielders acted, however, this also was not enough to cover the whole pitch in width, therefore England was vulnerable at the wings. This was what Belgium and especially Chadli tried to use it. As you see, with a simple vertical pass from Tielemans towards Chadli Belgium outplay the opponent’s midfield line. Then Chadli on the ball could penetrate the space. 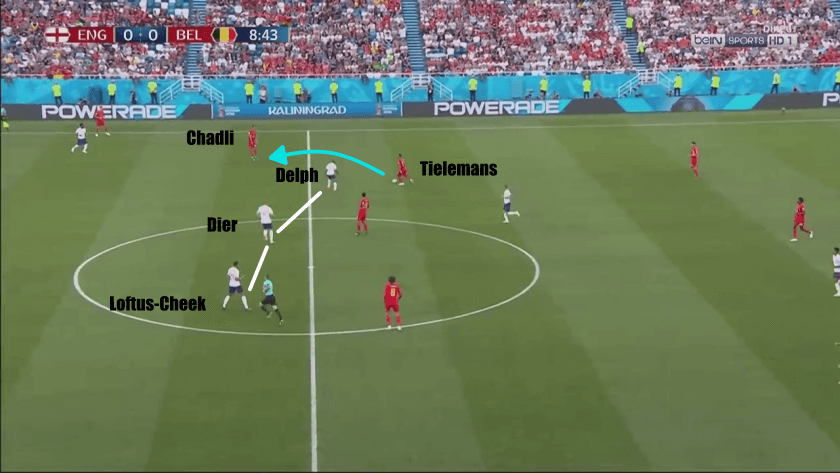 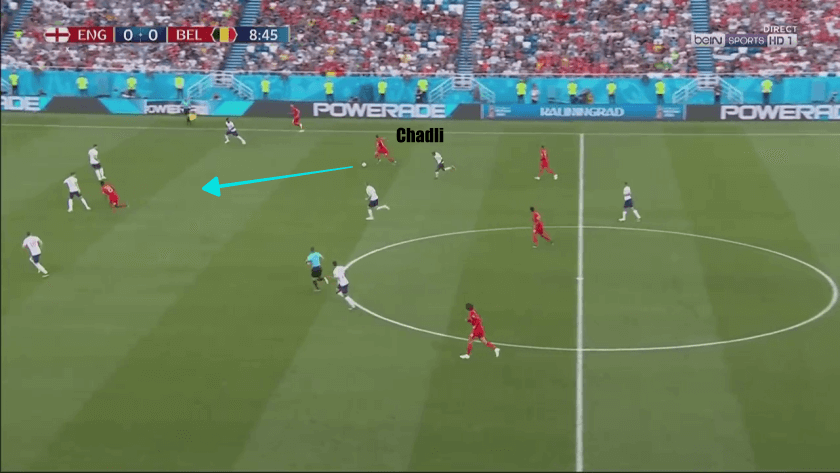 The same pattern came up in the second half. Again, Chadli with a pass from Tielemens could penetrate the space between the opponent’s lines. Otherwise, this situation led to the lone goal. 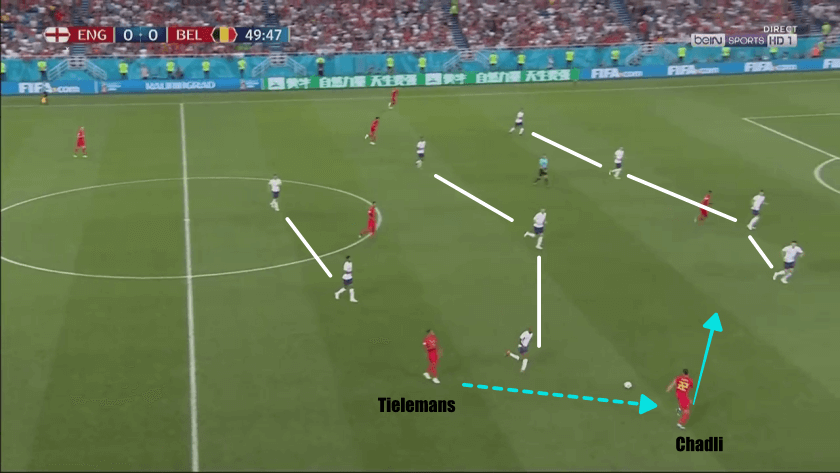 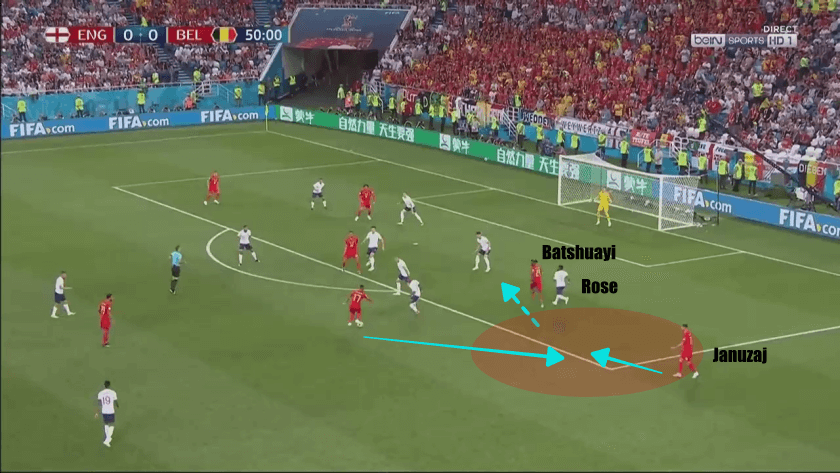 Before the goal, the key moment was when Batshuayi run inside the penalty box and dragged Rose away from Januzaj. This made a small free area for Januzaj, who was able to take advantage of it with a superb shot.

How the Three Lions made Belgium’s pressing ineffective

Belgium started with the intention of pressing actively in order to stop the opponent’s building and also for getting a ball in the dangerous area. They were pressing with a man-oriented manner where the front three focusing on the opponent’s back three. England usually responded in two ways. Sometimes just using a volley or airborne to bypass the pressure, but they often pass to the right wingback. Then the Belgian pressing players shifted to the ball side and also the respective wingback (T.Hazard) stepped up to pressing the opponent’s wingback, as the images show below.

However, the deepest English midfielder, Dier dropped towards the ball-carrier in order to provide an outlet from the pressure and it worked. Although was Belgium pressing England was able to progress with Dier’s movement and help.

There were not so much scoring chances for England, however, in the second half, they showed something really interesting which worth to discuss a little bit. So, before the chance, England was in possession for a couple of minutes ago. They passing from one wing to the another, but then due to a lot of shifting movement from the Belgian defensive structure there became a flaw in the defensive block.

Right in the middle of the pitch there was vacated space where Vardy could drop for receiving a pass through an open passing lane. Then Vardy could beat his marker and pass towards Rashford, who almost scored. Great combination.

Due to the victory, Belgium ended up at the top of the group, therefore tonight they will meet with Japan and if they beat Japan then will face Brazil or Mexico. On the other side, England will meet with Columbia and later on Sweden or Switzerland. Thus it is easy to decide which team is at the lighter way, but there is a possibility for meeting the two teams in the final. However, the road will be tough for both of them.