After several of the bigger teams have exited the competition, Brazil are now the bookies joint favourites (along with France), after looking pretty impressive in their games so far – despite a slight blip in the opening game against Switzerland. They’ll be looking to pick up a bit of momentum now after successive 2-0 victories.

Mexico provided one of the shocks of the tournament so far in defeating Germany. Their mix of attacking threat and pace has looked electric so far in the tournament although question marks about the quality of their defence have been raised after a 3-0 loss to Sweden in their last group game. 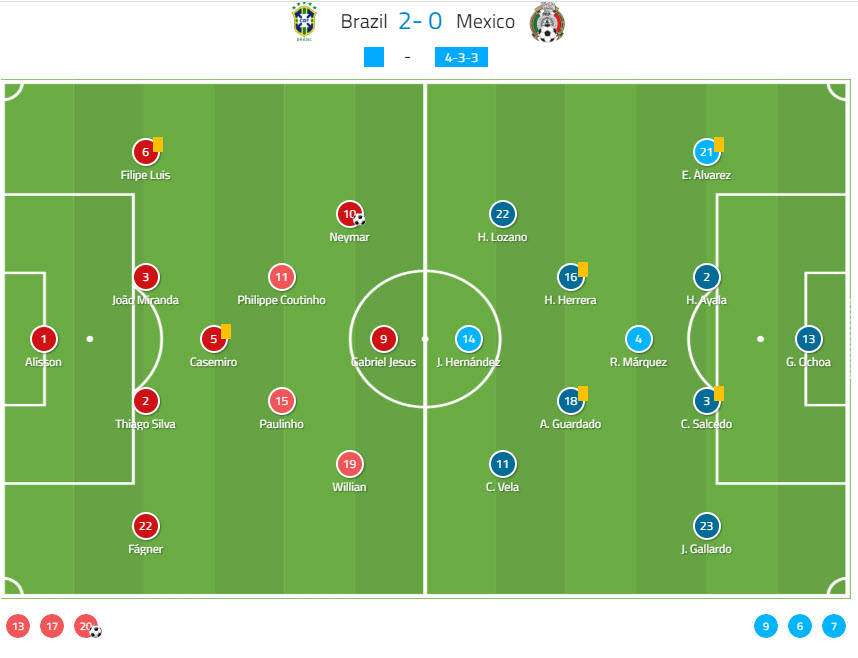 Brazil make one change from the team that beat Serbia – with Filipe Luis replacing Marcelo at left-back who has picked up a back injury – apparently to do with a dodgy mattress!

Mexico makes 2 changes from the team that sustained the heavy 3-0 loss to Sweden. With Hector Moreno suspended, Hugo Ayala comes in to replace him at centre-back. Miguel Layun is dropped to the bench with veteran Rafa Marquez returning to the team for his 146th cap. All eyes were on Hirving Lozano to provide the magic in the final third.

The first half came as quite the surprise for me – Brazil are obviously well known for their silky dribbling skills and their attacking ability, what they are not usually revered for is their ability to defend. The first half looked as if it was about trying to contain Mexico and their dangerous counter-attacks that caused so many problems for the German midfield/defence (despite lacking the end-product).

Brazil went about this by defending relatively deep and letting Mexico have plenty of the ball thus countering the advantage of the Mexican pace (as instead, they’d have to work the ball up the pitch instead) and I can’t remember seeing a Brazil side playing so conservatively (at least for the first half) before.

Even the Brazilian full-backs were cautious to adventure too far up the pitch (although this may have been different had Marcelo been fit enough to play), with a majority of Filipe Luis’ and Fagner’s touches coming in their own half. 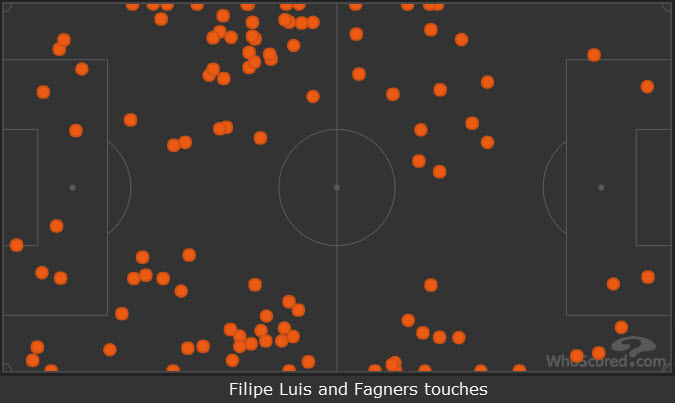 Mexico have won a lot of plaudits for their defending from corners this World Cup, instead of defending corners in the traditional method of putting players in the box, they’ve instead chosen to defend via attack by putting 3 players on the halfway line to counter at speed – explained in more detail by Max Bergmann in this wonderful piece. Brazil had obviously noticed this in their analysis and adapted, choosing to sacrifice players in the box to defend against any potential counterattacks, this resulted in a staggeringly low amount of players in the box from corners

When Brazil got their goal just after half-time, they took this even further to ensure their lead was protected – by sending just 2 players into the box for the corner! As a set-piece analyst, I’ve seen thousands of corners, but I can’t recall ever seeing so few players in the box for a corner before. 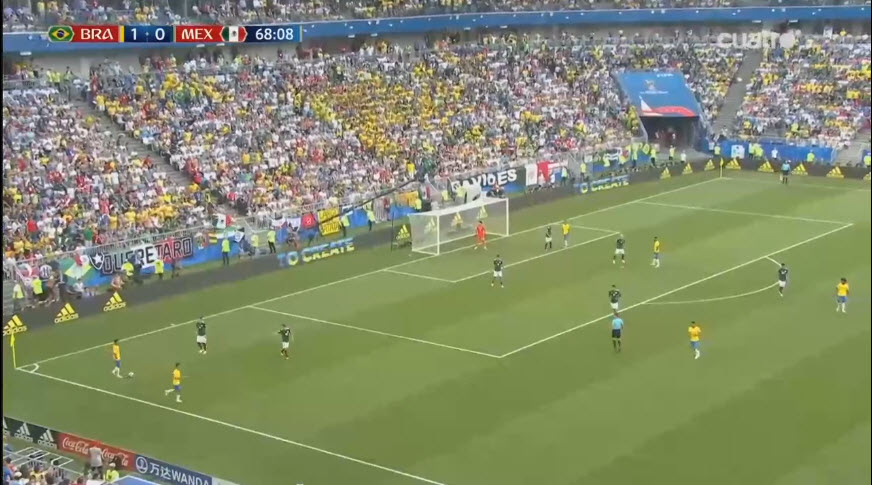 With Brazil dropping deeper, it was down to Mexico to adapt their game-plan to try to break them down. Despite a variety of attacking substitutions (such as Rafa Marquez being taken off at half-time for Miguel Layun, right-back Edson Alvarez being replaced by Jonathan Dos Santos) Mexico still couldn’t find the back of the net – despite creating a number of opportunities for themselves.

One thing I’ve noticed about this Mexico team at the World Cup is how wasteful they are in attack – creating potentially chance after chance but instead of passing to a team-mate in space either shooting from range or choosing the wrong pass. Whilst this is acceptable in the group stages if you have enough quality in the team, you’ll eventually end up struggling against a higher quality of opposition. This was the case against Brazil, with the Mexican attack infuriating me with their poor decision making or poor final ball.

The above is one such example – we see the left-back Gallardo on the ball with two potential players to play the ball to, either playing it safe to the unmarked player on the overlap or the riskier option of trying to thread the ball through to Hernandez who’s making a run past the last man – instead he chooses to shoot from that location, with the ball predictably flying wide of the post. 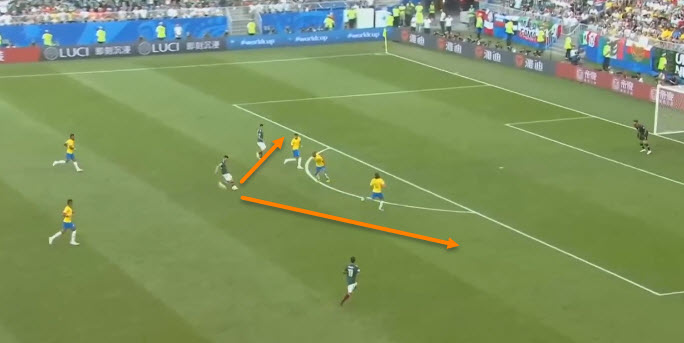 Again we see Mexico in a 3 vs 3 against Brazil who are defending very narrowly with Lozano on the ball, he has options either side of him but decides to attempt a shot from 25 yards out instead – hitting the defender right in front of him. 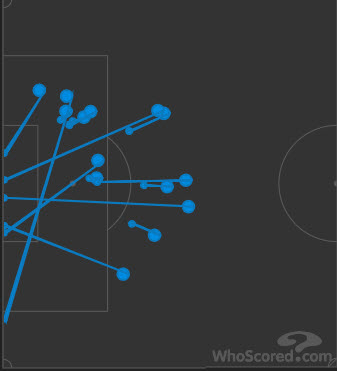 The Mexican shot location map tells the story in full picture with an incredible amount of long-shots of shots from very tight angles further backed up by 11tegen1’s xG model (@11tegen11 on Twitter) showing that despite 14 shots on goal they could only muster 0.5xG 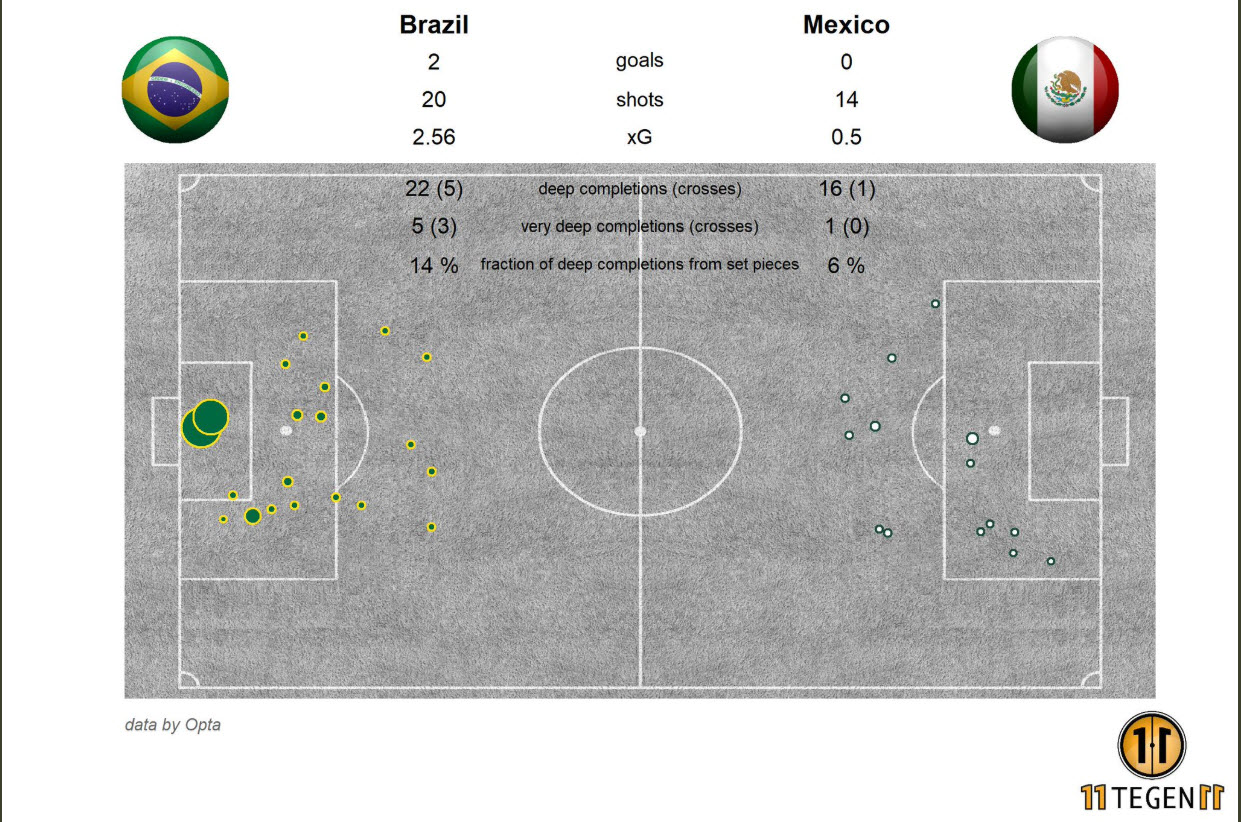 An entertaining and tactically interesting game in which Brazil were deservedly winners, they move on to the quarterfinals where they’ll face either Belgium or Japan. Sadly Mexico now leave the tournament amazingly for the 7th World Cup in a row at this exact stage – however they’ve been a highly interesting and entertaining team. Hopefully, the likes of Lozano will develop further and come back to entertain us further in the 2022 World Cup.